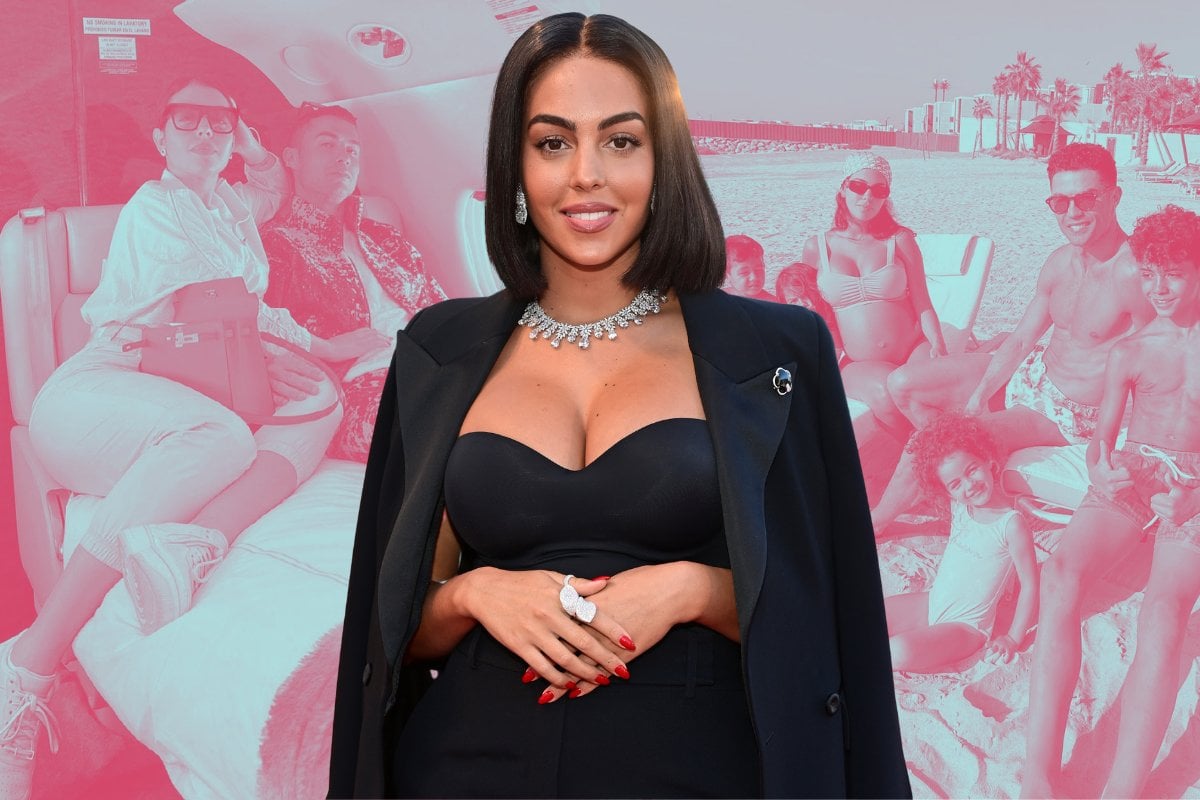 The girlfriend of Manchester United football star Cristiano Ronaldo has 34 million Instagram followers, regularly sharing photos on private jets and tropical holidays with her partner, stepchildren, and their daughter.

Now appearing in her own Netflix series, I Am Georgina, the 28-year-old gives us an even closer look into the couple's lavish lifestyle.

Watch the trailer for I Am Georgina here. Post continues below.

But before meeting the famed footballer, Rodríguez's life was as normal as it comes.

Georgina Rodríguez was born in Buenos Aires to a former footballer Argentine dad and Spanish mum. She grew up in the small northern Spanish city of Jaca, and as a child had dreams of becoming a ballet dancer. But because her parents couldn't afford it, she set her sights on fashion retail instead.

As soon as she was old enough, Rodríguez got her first job waitressing, before moving to the popular Spanish holiday destination, San Sebastian, where she started working as a retail assistant at the Spanish fashion label, Massimo Dutti.

But Rodríguez wanted more: "I wanted to work in luxury and I understood that for that I had to speak English," she told XLSemanal in 2018.

In 2012, aged 17, Rodríguez moved to the UK to work as an au pair and learn English, before returning to Spain and landing a job as a sales assistant at Gucci.

It was here she met Cristiano Ronaldo.

"Our first meeting was at Gucci," she said in an interview with The Sun.

"Days later, we saw each other again at another brand's event. It was then that we could talk in a relaxed atmosphere, outside my work environment.

"It was love at first sight for both."

"His height, his body, his beauty caught my attention. I was trembling in front of him, but a spark ignited," she continued.

"I am very shy and perhaps this stirred me more in front of a person who, with one glance, had touched me very deeply.

"Then after, the way Cristiano treats me, cares for me and loves me did the rest."

During the first few months of dating, the couple kept their relationship a secret, but before long fans got wind and started showing up at her store.

"I was hiding, but fans were looking for me at the store. They used to call up and ask about me, pretending to be clients," she told XLSemanal.

"There were always photographers waiting for me. The director told me to go down to the basement because he did not want to see me in the store. I started to be very uncomfortable and then I left."

In November the following year, Gina gave birth to their daughter Alana.

While their life looks picture-perfect on the outside, Rodríguez has admitted it hasn't always been easy dating the footballer.

Rodríguez stood by him when the second allegation came out.

"Being the partner of someone so famous is not easy, but I would not change it for the world," she told The Sun.

"What I feel for him is stronger than anything, any kind of pressure. Together we are stronger and there is a mutual admiration. But to seduce and to dream is so ­important. I always sleep in lingerie and I prefer sexy lingerie.

"It is comfortable and sexy and ­romantic. It has everything and it will make your man happy as well."

In October 2021, the couple announced that they're expecting twins.

"Delighted to announce we are expecting twins. Our hearts are full of love - we can't wait to meet you #blessed," the couple shared in a joint Instagram post.

Ronaldo is also dad to Cristiano Jr, whose mother has never been publicly announced, and twins Eva and Mateo through an anonymous surrogate.

Today, Rodríguez raises all four of them.

"I have always been mature and for me to have four children is not a burden," she told The Sun.

"I wear it very well and, in fact, I no longer imagine my life without my children. It has definitely brought us closer. We’re happier together than ever. The children are our joy."

In January 2022, for Rodríguez's 28th birthday, Ronaldo projected a photograph of his girlfriend onto a Dubai skyscraper.

And while the couple aren't married just yet, they plan to.

"We’ll be [married] one day, for sure," Ronaldo told Piers Morgan on Good Morning Britain.

"It’s my mum’s dream as well. So, one day. Why not? It’s great. She’s my friend. We have conversations. I open the heart for her and she opens the heart for me."