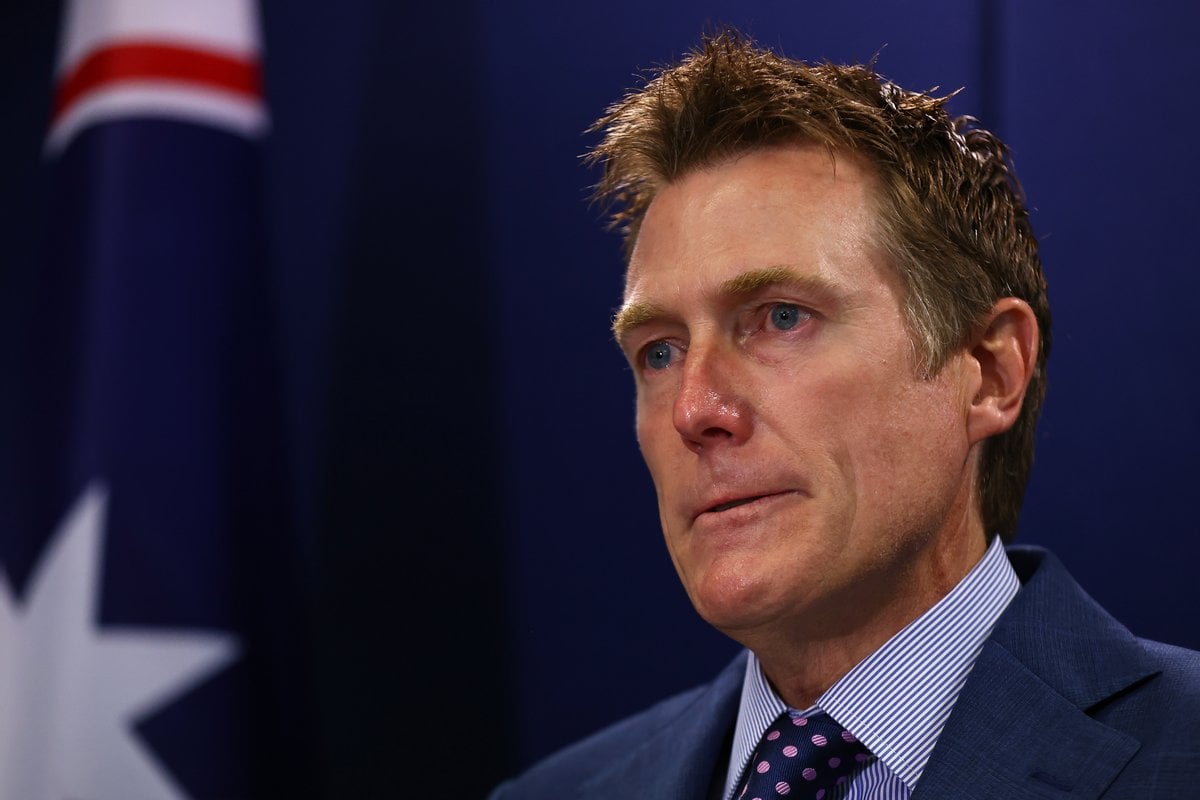 Christian Porter has dropped his defamation case against the ABC.

Federal minister Christian Porter has decided to discontinue his defamation action against the ABC and journalist Louise Milligan, the broadcaster says.

"All parties have agreed to not pursue the matter any further," the ABC said in a statement on Monday.

"No damages will be paid.

"The ABC stands by the importance of the article, which reported on matters of significant public interest, and the article remains online. "

The February 26 article has since been updated with a statement confirming the "unnamed Cabinet minister" subject to a woman's rape allegation was Mr Porter but that the ABC "did not intend to suggest that Mr Porter had committed the criminal offences alleged".

"The ABC did not contend that the serious accusations could be substantiated to the applicable legal standard – criminal or civil," the editor's note says.

"However, both parties accept that some readers misinterpreted the article as an accusation of guilt against Mr Porter. That reading, which was not intended by the ABC, is regretted."

The former Attorney-General filed a claim for defamation on March 15, alleging the story defamatory because it imputed he raped a 16-year-old girl in 1988 and that contributed to her taking her own life.

"I stand by my journalism & proud to work (Four Corners) & grateful to the ABC & our brilliant legal team for supporting public interest journalism," Milligan tweeted.

Arcare Maidstone residents were locked down and placed into self-isolation on Sunday after a female healthcare worker at the facility tested positive.

The Altona woman worked at the site in the city's northwest on Wednesday and Thursday and may have been infectious at the time.

Arcare chief executive Colin Singh said no other staff members or residents had returned positive results but further testing was planned for Tuesday.

Health authorities are scrambling as one of Victoria’s five new COVID-19 cases has no immediate identifiable source of infection. The worker at an aged care facility in Maidstone is believed to have been infectious during two shifts last week. More: https://t.co/3MfH3tVdBW #7NEWS

The Altona woman, one of five local cases reported on Sunday, tested positive despite receiving her first coronavirus jab on May 12.

Only a third of Arcare Maidstone's 110 staff and 53 of 76 residents have been vaccinated so far, and the federal government has brought forward scheduled vaccinations to Monday.

Across Melbourne, vaccination hubs have been swarmed by residents, with video outside the Royal Exhibition Centre obtained by 9News, showing a female medical worker stepping outside to inform those waiting there were no Pfizer vaccines available for walk-ins.

"Please stop yelling at me," she can be heard saying.

As Victoria's list of exposure sites soared past 200, Acting Premier James Merlino said no decision has been made on whether the state's seven-day lockdown will end on Thursday evening as planned.

"This is something that is evaluated every hour of every day," he said.

Meanwhile, Victorian Treasurer Tim Pallas accused the federal government of failing to come to the aid of stood-down Victorian workers as he announced a $250 million business support package.

"It would be really good if the self-styled party of the workers actually did some work for working people," he told reporters over the weekend.

"Victorian workers deserve more from the Federal Government, and I am beyond disappointed," added Merlino.

Acting Premier James Merlino says the Victorian govt was denied financial assistance from the Federal Government. Treasurer Pallas: "It would be really good if the self-styled party of the workers actually did some work for working people." #Auspol @SBSNews #MelbourneLockdown pic.twitter.com/cWvwph5sNX

This week marks the start of when Australians can start getting their second dose of the AstraZeneca vaccine, after it first started rolling out 12 weeks ago.

Federal Health Minister Greg Hunt and his Department of Health secretary Brendan Murphy both received their second shots on Sunday.

He said the second dose 12 weeks after the first jab is an indispensable part of the vaccine program. There is a three-week gap for those receiving the Pfizer shot.

Today, alongside the Secretary of the Department of Health, Professor Brendan Murphy, I received my second vaccination with the AstraZeneca COVID-19 vaccine. pic.twitter.com/PAjcXh5lGv

He said 4.2 million Australians have had a vaccination so far after a record of almost 600,000 were completed in the past week.

"I think that is an extremely important step that more people are being vaccinated at a faster rate than ever before," Mr Hunt told reporters in Canberra on Sunday.

"The first million vaccinations took 47 days, 19 for the second, 19 for the third and 13 days for the most recent."

Jacinda Ardern has welcomed Scott Morrison to New Zealand with a hongi, with Queenstown playing host to the annual Australia-New Zealand Leaders Forum.

On arrival, the pair engaged in the traditional Maori greeting, touching noses and sharing breath.

New Zealand has backed Australia in its continuing trade dispute with China ahead of leadership talks between Scott Morrison and Jacinda Ardern. https://t.co/k5hOL8Ru1m

The visit comes after the opening of the trans-Tasman bubble last month.

"I believe what Australia and New Zealand have been able to achieve in this last 18 months is quite extraordinary on a global scale," Mr Morrison said. "It's a testimony to the peoples of New Zealand and Australia."

Mr Morrison made the trip despite a growing COVID-19 outbreak in Victoria, which drew speculation he might not travel.

"He did a runner to Hawaii during the bushfires (in December 2019) thinking it was under control, and it backfired on him," Jennifer Curtin, politics professor at the University of Auckland, told AAP.

Instead, "Shark One" touched down at Queenstown airport just after 3pm NZST on Sunday for the 24-hour visit.

The two leaders and their partners travelled up Queenstown's gondola to address business and tourism leaders with the spectacular vista of Lake Wakatipu at sunset below. They finished their Sunday with a private dinner, ahead of formal talks on Monday.

On the agenda is China, the Pacific and the two countries' pledge to roll out the COVID-19 vaccine to the region, deportations, and more.

The pair exchanged vows in Westminster Cathedral on Saturday in front of a small group of close friends and family.

Initially, Downing Street would not comment on reports of the wedding but, on Sunday morning, a spokesman said: "The Prime Minister and Ms Symonds were married yesterday afternoon in a small ceremony at Westminster Cathedral.

💒 Boris Johnson and his new wife Carrie Symonds have released the first picture from their low-key wedding ceremony.

"The couple will celebrate their wedding with family and friends next summer."

They are said to have sent save-the-date cards to family and friends for the celebration on July 30 2022. It is understood Symonds will take her husband's surname and be known as Carrie Johnson.

A picture issued by No 10 of the couple in Downing Street's garden after the wedding saw them gazing at each other with the bride wearing a long white dress and a floral headband and the prime minister a dark suit and blue tie, with a white flower in his buttonhole.

The couple announced their engagement - together with the news that they were expecting their first child - in February last year.

It is Johnson's third marriage, having finalised his divorce from his second wife, Marina Wheeler, in 2020.

Naomi Osaka has been fined for skipping a press conference following her first-round win at the French Open and warned of possible expulsion from Roland Garros and future majors if she fails to meet her media commitments.

In the run up to the clay court major, the world No.2 announced she would boycott news conferences while in Paris to raise awareness of players' mental well-being, saying the nature of questions from journalists is like "kicking a person when they are down".

Naomi Osaka is fined $15,000 by tennis officials after announcing that she would not do press interviews during the French Open, saying she was prioritizing her mental health instead. https://t.co/GlK1Pu4950

Osaka started her French Open campaign with a 6-4 7-6 (4) win over Romanian Patricia Maria Tig and then snubbed the post-match news conference, although the four-time grand slam champion did hold a court-side interview immediately after the contest.

The board of the four grand slams said in a statement on Sunday that the French Open organisers had asked Osaka to reconsider her position and tried unsuccessfully to speak with her to resolve the matter.

Rafa Nadal, a 20-times grand slam winner, and women's world No.1 Ash Barty have said they believe players have a duty to address the media.

Actor Joe Lara who starred in the TV series Tarzan: The Epic Adventures has been killed in a plane crash in Tennessee.

The star, 58, was one of seven people to die when a small jet crashed into the lake near Smyrna.

Joe Lara, the star of TV’s Tarzan: The Epic Adventures, died Saturday with his wife and five others in the crash of a small jet near Nashville, authorities said. He was 58. https://t.co/s3yx9CJseb

His wife, Gwen Shamblin Lara, who founded the Remnant Fellowship Church in Brentwood in 1999, was also among the dead.

Investigators on Sunday continued searching for the bodies of the victims.

- Police are hunting for the gunmen who opened fire at a Florida club, killing at least two people and wounding at least 20 more.

- A judge has indicated that a service technician is to blame for the Italian cable car disaster that killed 14 people. He intentionally disabled the car's emergency brake because it kept locking spontaneously.

- A key Israeli opposition party has backed a unity government that would bring to an end to Benjamin Netanyahu's 12 years as the country's longest serving prime minister.

Reply
Upvote
9 upvotes
Scotty from Marketing never misses a photo op. Victorians especially happy to see him enjoying himself in NZ, while his aged care system, still under-vaccinated and staffed by his party's favourite casualised workers, flares up with COVID again.