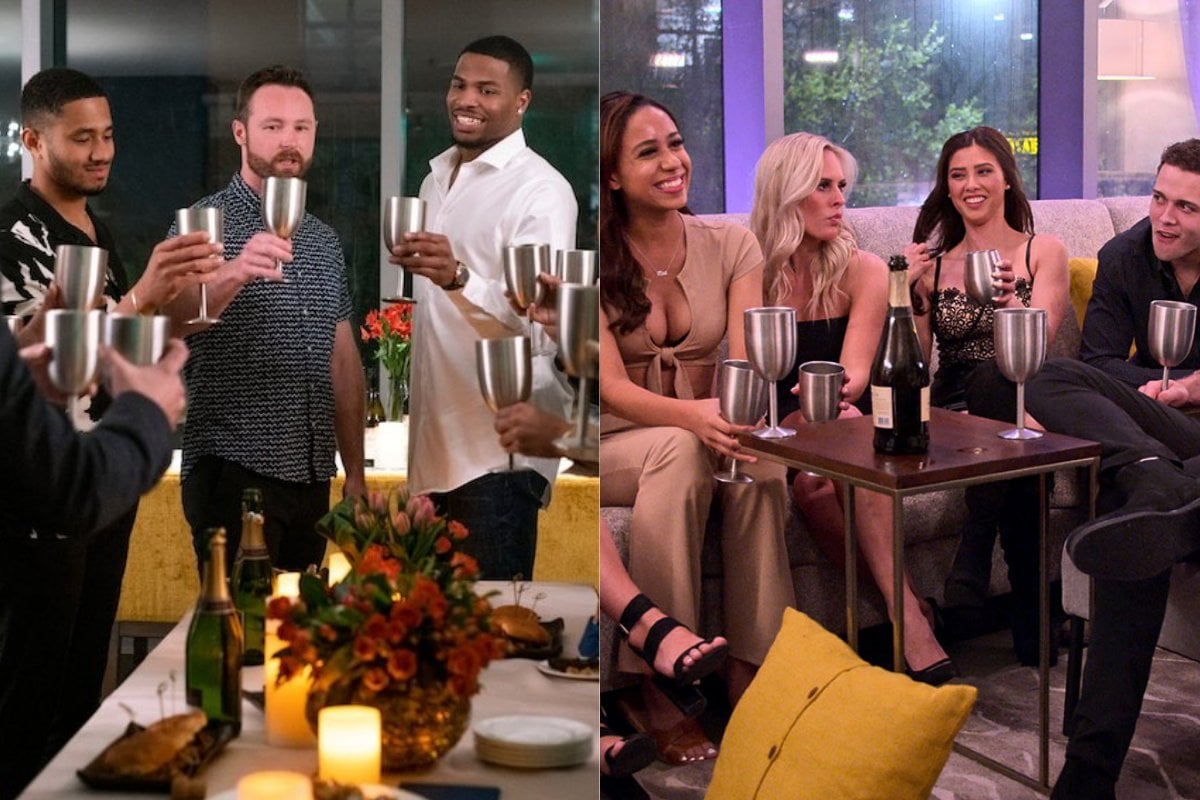 Just when you thought it couldn't get any wilder than Love is Blind, the creators of the reality dating show have come up with an even messier experiment: The Ultimatum: Marry or Move On.

If you haven't seen it already, in a nutshell, the new Netflix series brings together six couples from Austin, Texas, each of which consists of one partner who is ready to get married, and one who isn't - hence the ultimatum.

They arrive together but split as soon as soon as the show begins, and get one week to be single and get to know (flirt with) the other contestants.

They then choose a new partner to enter a "trial marriage" with for three weeks, return to their original partner for another three weeks, and then decide whether they actually want to marry the person they came in with or not.

It's the definition of chaotic and maybe even a little (a lot) toxic.

Watch the trailer for The Ultimatum here. Post continues after video.

After bingeing the entire series and reunion episode, I have five questions I need to address immediately. Here's what I can't stop thinking about.

I'm sorry, but I know very few people in their early to mid-20s who are settling down just yet. Especially after dating someone for one to two years tops.

The people on this show are all under 31.

The oldest woman is 26, while the oldest male is 30, and most are around the 25 mark. All of them have been dating their partner for under two and a half years.

To me, that's a dead giveaway they went on this show for other reasons (*cough* Instagram followers).

I’m just still stuck on the fact that everyone on this show is under the age of 26 and yal pressed about marriage and kids!!! GET IT TOGETHER!!! #TheUltimatum

While they are all pretty young, one contestant has actually called out Netflix for lying about her age on the show.

In a recent Instagram post, Lauren captioned it "30 and thriving", and a fan responded asking about her age.

"Wait, I'm terribly confused weren't you like 26 on the show?" the fan wrote, to which Lauren replied: "They lied about my age. We can't figure out if it was intentional or not." 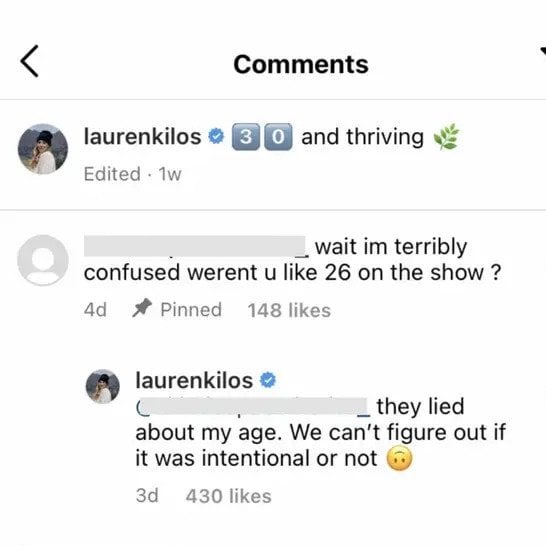 When BuzzFeed reached out to Netflix for comment, a representative "confirmed Lauren's age will be corrected on the show".

2. How do they find these people?

I constantly think this when watching weird and wonderful reality TV shows.

Where do they find these contestants? Especially ones who are willing to destroy their relationships on international TV.

According to an interview with BuzzFeed, Madlyn, Colby, Jake, and April were all recruited for the show via Instagram. And they all thought it was a scam.

"[The message] was something along the lines of, 'Is your relationship at a standstill or a roadblock?' It was pretty vague. Seemed like a weird clickbait kind of thing to me," Madlyn told the publication. 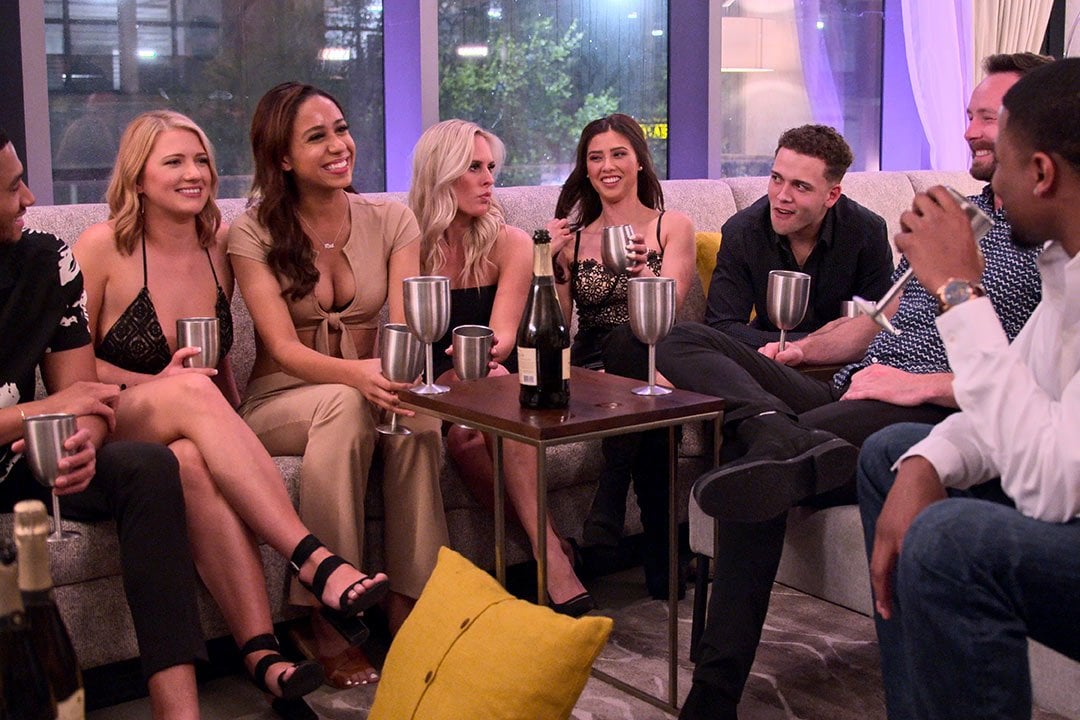 And Jake only learned about the "ultimatum" aspect once he got through to the interviews.

"We actually didn't even know there was an ultimatum, going on the show. We were told we were living with other cast members, we were going to be dating and moving in with them, and then after the three weeks, we'd be moving back in with our ex," Jake said.

"But [it wasn't] until the first interviews that we actually found out, 'Hey, there's an ultimatum to be given.' And that was a big shocker to us!

"A lot of us didn't even know there was an ultimatum, or that marriage was anything to do with the show."

3. What's with the silver cups?

In every scene where the contestants drink (read: basically every scene), they're drinking out of these silver wine glasses.

You see them over and over again in the series.

Watching #TheUltimatum and the true stars of this show were the stainless steal glasses pic.twitter.com/chnAl8KiY7

The same glasses are used in its sister dating show, Love Is Blind, but theirs are gold.

I assumed there was a very tactical reason why they used these specific glasses. But apparently not.

Speaking to Today, Chris Coelen, the creator of both shows, explained the reasoning behind them. (And frankly, it's not as 'wow' as you think.)

"The silver goblets in The Ultimatum are an homage to the gold goblets in Love Is Blind," he said.

"We think the goblets are a subtle but fun way to tie the elements of each show together."

4. Who is still together?

The show is honestly brutal.

It pushed these couples to the absolute limit; so naturally, I needed to know who made it out the other side. And surprisingly, more than half of them are still together.

Alexis and Hunter who got engaged before choosing their "trial partner" and Lauren and Nathan who also got engaged that same night are all still together.

Alexis and Hunter are preparing for their big day, while Lauren and Nathan - who didn't want to get married because they couldn't agree on having children or not - are in couples counselling and have decided to have one child.

A post shared by Alexis Maloney : The Ultimatum (@alexiselainemaloney)

Colby and Madlyn who got married on the show and announced their pregnancy during the reunion are still together.

Madlyn is expected to give birth any day now.

While Randal and Shanique got engaged in the final episode, they shared that during the reunion they had broken up for six months and gotten back together.

They are still together now.

April and Jake are no longer together.

Jake, who left the show with Rae, is now single. While April, who announced she was in a new relationship during the reunion, is still happily coupled up.

And lastly, Rae and Zay are no longer together.

During the reunion that became very clear, and they are both now single.

Rae occasionally posts videos with Jake and has said they still speak despite going their separate ways after choosing each other at the end.

So, who knows, maybe they'll end up together.

5. Did Colby and Madlyn legally get married?

During the final episode, not only did Colby and Madlyn get engaged but they also got married then and there. So, was it legal?

Speaking to BuzzFeed, Madlyn explained it wasn't. However, they did get married IRL the following day.

"We were common law married — but we did go to the courthouse the next day with one of the executive producers," she said.

"We had a whole day, and that was really honestly even more sweet; it was even more intimate. There wasn't a whole set of camera crews! Yeah, so we are legally married."

They filmed the whole thing and shared it on Instagram here:

Madlyn also shared that they planned on having a wedding after, but she fell pregnant.

"Colby gave me my small wedding, and he just kind of kept going on about like, 'Man, I really want a donkey with drinks!' And he wants like a tent and a green velvet carpet. He really wants the whole thing!" she said.

"So I went and got a dress, but then I got pregnant. Maybe in 2023, there will be some sort of celebration, but it'll be ours. It'll be different."

Did you watch The Ultimatum? What did you think? Share your thoughts in the comments below.