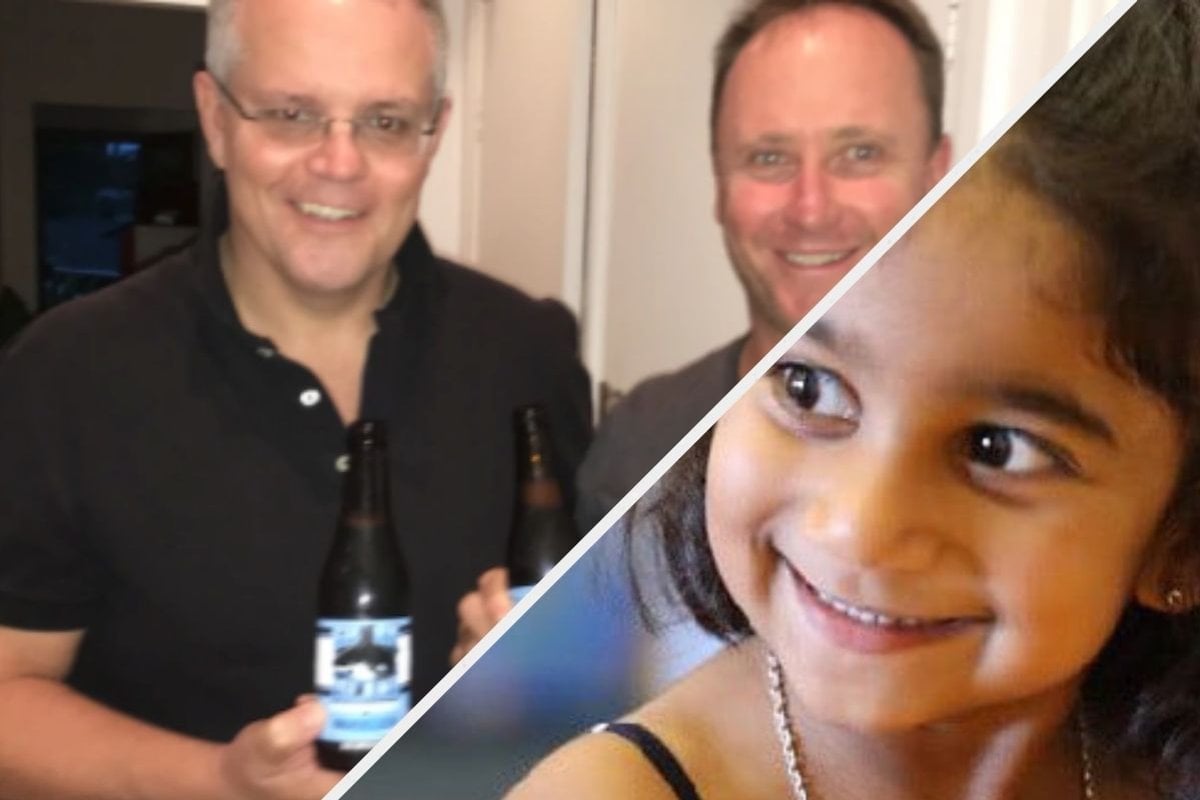 A Tamil family being held in immigration detention on Christmas Island since 2019 will be allowed to live in Perth temporarily, but the longtime future for the family is still unclear.

"The family will now reside in suburban Perth through a community detention placement, close to schools and support services, while the youngest child receives medical treatment from the nearby Perth Children's Hospital and as the family pursues ongoing legal matters," he said in a statement.

"Importantly, today's decision does not create a pathway to a visa."

Immigration Minister Alex Hawke on 2GB now. He says there's no guarantee the Tamil family will be able to stay, and that no judicial process to date "has found that we owe them protection"

The federal government has been weighing up what to do with the Murugappan family as it faces mounting pressure to let them stay in Australia.

The family, who had arrived by boat and established their home in the central Queensland town of Biloela, was put in immigration detention upon their visa expiry in 2018.

They were then transferred to Christmas Island in August 2019 after getting a reprieve from deportation.

The family's plight re-entered the spotlight after four-year-old Tharnicaa was flown to the mainland for medical treatment.

Tharnicaa's mother Priya is with her at Perth Children's Hospital but her father and older sister remained on Christmas Island.

The episode focused on family friend of the PM Tim Stewart, whose activities have divided his own family and prompted his sister to dob him in to the national terror hotline.

The Stewarts are 'grieving' for the son they fear they've lost to the QAnon conspiracy theory. He is an old friend of the Prime Minister. https://t.co/I7YD1djkRO #4corners. pic.twitter.com/98mwcfJusp

The ABC claims Stewart influenced Morrison to use the phrase "ritual sex abuse" - a phrase used by QAnon - in a formal apology to sex abuse victims.

The program reports Stewart and his family were due to join the Morrisons on their Hawaiian holiday before the Prime Minister cut his trip short due to the bushfires.

Morrison has told news.com.au, “The Government will not be responding to the baseless conspiracy theories being peddled by Four Corners".

Confidence is growing that the bulk of Australia's COVID-19 vaccinations can be delivered by the end of the year.

Health Minister Greg Hunt on Monday announced an agreement that will see GPs receive a fee for delivering jabs to the frail, elderly or immobile in their own home.

It's expected the program will help complete the first phase of the vaccination program, reaching people who could not get to a GP surgery or state clinic or initially declined to get a shot.

Over coming months the amount of vaccine available and number of places to get a jab are set to considerably ramp up.

The nation's vaccine rollout is about to go to the next level with GPs to be paid to make home visits to the elderly and inject them in the comfort of their living rooms. https://t.co/Ns8u9Eznlv 7NEWS at 6pm. #Coronavirus #7NEWS pic.twitter.com/iykGEazwua

But in the short term the federal government is working with Victoria, which in some areas has had to pause bookings and walk-in appointments due to heavy public demand.

Mr Hunt said in the final quarter of the year a further 800 GPs and the pharmacy network would be given the Moderna vaccine to deliver.

So far almost 5.9 million vaccinations have been given nationally, with Tasmania leading the rate of jabs per 100 people.

Victoria recorded two new local cases of COVID-19 on Monday, both children who are close contacts of previous cases and have not been in the community while infectious.

NATO leaders have designated China as presenting "systemic challenges" in a summit communique that marked a forceful stance for the Western military alliance.

In a diplomatic victory for US President Joe Biden, who has urged his fellow NATO leaders to stand up to China's authoritarianism and growing military might, the final statement branded China a security risk to the Western alliance.

The language, which will now set the path for alliance policy, comes a day after the Group of Seven rich nations issued a statement on human rights in China and Taiwan that Beijing said slandered its reputation.

"China's stated ambitions and assertive behaviour present systemic challenges to the rules-based international order and to areas relevant to alliance security," NATO leaders said in a communique after their summit on Monday.

Biden also told European allies the alliance's mutual defence pact was a "sacred obligation" for the United States - a marked shift in tone from his predecessor Donald Trump, who had threatened to withdraw from the alliance and accused Europeans of contributing too little.

"I want all Europe to know that the United States is there," Biden said. "NATO is critically important to us."

Biden said both Russia and China were not acting "in a way that is consistent with what we had hoped", referring to Western efforts since the mid-1990s to bring both countries into the fold of liberal democracies.

In a sign of a common position emerging on China, no longer seen as a benign trading partner, the European Union has already designated Beijing a "systemic rival".

Australia isolated on climate after summit.

Australia has become even more isolated on climate change after the heads of the world's largest economies agreed to end government support for coal-fired power stations by the end of the year.

The statement was not designed to single out Australia but highlighted Scott Morrison's outsider status on climate change.

Even an inadequate G7 statement on climate is far ahead of Scott Morrison's position — leaving Australia ever more out of touch, writes @BernardKeane [Unlocked] #auspol https://t.co/swc35ReWga

It also made it more difficult for the prime minister to continue resisting calls to commit to achieving net-zero carbon emissions by 2050.

The climate statement will enrage strident coal supporters in the Liberal and National parties.

Labor leader Anthony Albanese said the summit showed Australia was increasingly falling behind the rest of the world. He said the prime minister needed to explain why money was being spent on a feasibility study for a new coal-fired power station in Queensland.

Deputy Prime Minister Michael McCormack said while Australia was not a signatory to the G7 communique, it was committed to lowering emissions and keeping power prices affordable.

As international travel remains blocked to most Australians, independent MP Zali Steggall will introduce a petition calling for parents to be classified as immediate family members.

Under the current laws, parents who are not Australian citizens and live overseas are not eligible for exemptions to travel to Australia.

It’s been over 14 months since we shut the borders as an emergency measure. Exemption to travel categories need to be extended to parents & visa holders, quarantine capacity multiplied & safer vaccine rollout prioritised. Where is the PM’s plan? 🧐 #auspol https://t.co/zA7M0r2QlI

More than 70,500 people have signed the petition, also calling for more compassion in allowing citizens to leave Australia to visit family.

Ms Steggall said her office is being inundated with desperate calls for help, particularly from new mothers whose parents are unable to come into Australia to assist them.

A woman in her 30s has been found dead on the side of the road in Margaret River.

She was discovered on Monday morning, just 300 metres from homes in the housing estate of Rapid's Landing, close to a popular walking trail.

WA Police are trying to work out the last movements of a woman whose body was found on a popular walking trail south of Perth. #9Today pic.twitter.com/mqhn88EpY8

Homicide police are investigating. The woman is yet to be formally identified.

The YouTube channel's star Jordan Shanks-Markovina is already being sued by the deputy premier for defamation over a series of videos.

Members of a counter-terrorism force set up after the Lindt cafe siege arrested Langker at his Dulwich Hill home and charged him with stalking offences on June 4.

Officers allege the 21-year-old committed the offences against the deputy premier at Macquarie University on April 19 and in Sydney on June 4.

Friendlyjordies does not agree with the police version of events.

"A man has been charged following investigations by the Fixated Persons Investigation Unit into alleged stalking offences," NSW Police told AAP in a statement.

Langker has been granted strict conditional bail and is due to appear at Newtown Local Court on June 24.

The charges are the latest development in the unfolding spat between the friendlyjordies channel and the deputy premier.

This video was written, produced, and published by Jordan and the editorhttps://t.co/x9FYaHEZLs

Mr Barilaro is suing Google and Shanks-Markovina, whose channel boasts more than 130 million views, for defamation over a series of videos.

According to a statement of claim filed in the Federal Court in May by the MP, the videos in question greatly injured his reputation.

Novavax says its COVID-19 vaccine is more than 90 per cent effective, including against a variety of concerning variants of the coronavirus in a large, late-stage US-based clinical trial.

The study of nearly 30,000 volunteers in the United States and Mexico puts Novavax on track to file for emergency authorisation in the US and elsewhere in the third quarter of 2021, the company said.

The protein-based vaccine was more than 93 per cent effective against the more easily transmissible predominant coronavirus variants that have caused concern among scientists and public health officials, Novavax said on Monday.

Breaking News: Novavax’s Covid-19 vaccine demonstrated an overall efficacy of 90.4%, on par with the vaccines made by Pfizer-BioNTech and Moderna, in a new trial. But with the U.S. awash in other options, it might be needed more elsewhere. https://t.co/wyYGXxMlzG

Protein-based vaccines are a conventional approach that use purified pieces of the virus to spur an immune response, such as those used against whooping cough and shingles.

Novavax said the vaccine was generally well tolerated. Side effects included headache, fatigue and muscle pain and were generally mild.

British Prime Minister Boris Johnson has delayed his plans to lift most remaining COVID-19 restrictions by a month, warning that thousands more people might die if he does nothing because of the rapid spread of the Delta variant.

Under the final stage of a plan outlined by Johnson in February, he had hoped to lift most social restrictions on June 21, meaning pubs, restaurants, nightclubs and other hospitality venues could fully reopen.

That much-anticipated step was pushed back to July 19 on Monday.

"I think it is sensible to wait just a little longer," Johnson told a news conference.

"As things stand, and on the evidence that I can see right now, I'm confident that we will not need more than four weeks."

The extra time would be used to speed up Britain's vaccination program - already one of the world's furthest advanced - by shortening the recommended time between doses for those aged over 40 to eight weeks from 12 weeks.

- Myanmar's ousted leader Aung San Suu Kyi has gone on trial in cases against her of illegally possessing walkie-talkie radios and breaking coronavirus protocols. She also faces charges of incitement, and violating the Officials Secrets Act. She was overthrown by the army on February 1.

- A 76-year-old man who had 39 wives and 94 children and was said to have the world’s largest family has died in north-east India.

Ziona Chana lived with his family in a vast, four-storey pink structure with about 100 rooms in Baktawng. His wives shared a dormitory near his private bedroom.

A man in India believed to have headed the "world's largest family", has died aged 76.

Ziona Chana has left behind 38 wives and 89 children https://t.co/w802gHX40T pic.twitter.com/vub1xcx2Oc

Reply
Upvote
What a Morrison Government wilful waste  of money, the whole Christmas Island thing. People need to wake up to this bunch jerks. Talk about bumbling fools.
A
anonymous a year ago