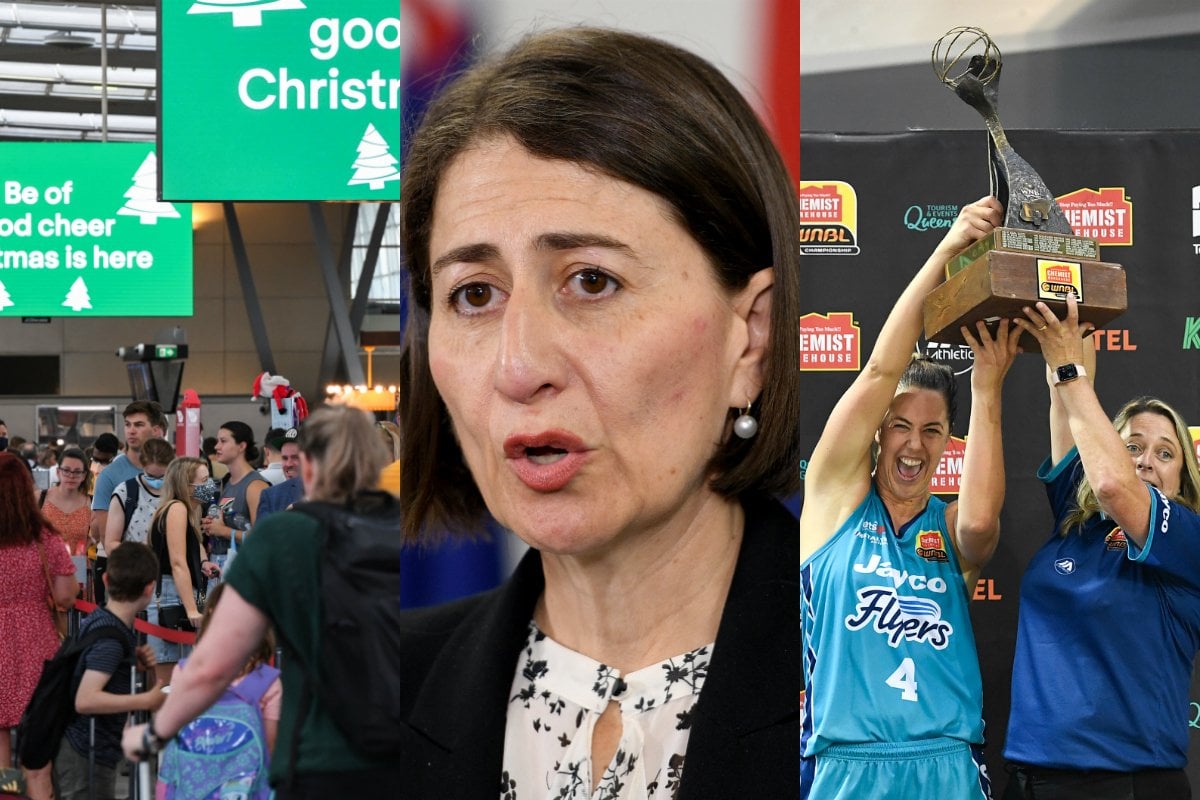 Sydney's Northern Beaches cluster has increased by 15 on Monday.

NSW Premier Gladys Berejiklian said all the locally acquired cases to 8pm on Sunday were linked to the Avalon outbreak, bringing the total number in the cluster to 83, up from 63 on Sunday.

NSW recorded 15 locally acquired cases of COVID-19 in the 24 hours to 8pm last night, and an additional eight cases in returned travellers in hotel quarantine. pic.twitter.com/BBkUgXZELD

Berejiklian said her government will consider its position in relation to what Christmas and the next few days will look like beyond midnight Wednesday morning, "but obviously it is an ongoing brief".

She said the final decision about Christmas Day would come on Wednesday morning.

"I thank people again for coming forward and getting tested. I thank people for respecting the health orders and restrictions. It is evident people are doing what we asked them to do," she said.

"In terms of mask-wearing, please make sure, if you in an indoor setting, obviously on the Northern Beaches it's more paramount, but if you're catching public transport, you need to be wearing a mask. If you're going grocery shopping or indoor shopping, in a mall or anywhere else, you need to be wearing a mask... Don't think you're immune. This can affect any of us."

NSW Chief Health Officer Dr Kerry Chant said NSW Health was still unsure of the source of the spread in the community.

Airport chaos as thousands flee Sydney ahead of border closures.

Thousands of travellers have fled New South Wales as states and territories prepare to lockout those coming from the state, just four days before Christmas.

NSW recorded another 30 confirmed COVID-19 cases on Sunday, with 28 of those already linked to the growing Avalon cluster on Sydney's Northern Beaches.

In response, Queensland has banned residents of Greater Sydney from entering as of 1am Tuesday.

South Australia has barred Northern Beaches residents and directed those from the rest of Sydney into 14-day quarantine.

Victoria has declared all of the Greater Sydney area a 'red zone', meaning travellers are not permitted to enter.

Canberrans have been advised not to travel to Sydney, and Western Australia has reintroduced its hard border with NSW.

Thousands have spent the weekend frantically calling airlines, desperate to change their travel plans and make it to their destinations before deadlines are enforced.

There has been heartbreak for arrivals in South Australia on Sunday night, with passengers landing at Adelaide from Sydney forced into quarantine despite arriving before the planned COVID-19 border closure.

Arrivals from Sydney to Adelaide Airport at 6pm on Sunday said they were told they would need to either go into 14 days' quarantine or return to Sydney despite arriving six hours before the border closure, 9News reported.

"It's a travesty. It's disgusting how this has come about. You feel completely powerless," one passenger told the Today show.

Sydneysiders face a nervous wait to learn if a coronavirus outbreak on the city's Northern Beaches has spread across the region, as every state and territory moved to block them from entering.

The Northern Beaches remain the centre of the cluster, but NSW Health's new list of cases on Sunday showed the virus had spread further in the city.

NSW Health has been notified of more venues on Sydney’s Northern Beaches and Sydney’s eastern suburbs that have been visited by confirmed cases of COVID-19.

For information on locations, times and advice on testing and self-isolation, see https://t.co/cxtYM6JLUz pic.twitter.com/HN2CX8FDnx

Outside Sydney, Forster and Raymond Terrace are also on the warning list.

The state reported another 30 cases on Sunday with 28 linked to the cluster.

The total number of known coronavirus cases in NSW suspected to be linked to the cluster has now risen to 70, though Premier Gladys Berejiklian remained hopeful the outbreak could be contained.

"The one positive is we still have not seen evidence of massive seeding outside the Northern Beaches community and our aim, of course, is to keep that in place," Berejiklian told reporters on Sunday.

The government has imposed a number of restrictions on the Sydney region, including the Blue Mountains, Central Coast and Illawarra-Shoalhaven, which will remain in place until 11.59pm Wednesday.

No more than 10 people are allowed at household gatherings and patrons will need to maintain a four-square metre distancing at venues.

Up to 300 people will be permitted at places of worship and hospitality venues, while singing and chanting at indoor venues is banned, and dance floors will only be allowed at weddings.

People are also being urged to wear masks until Wednesday and to avoid visiting any vulnerable friends, relatives or aged-care facilities until Christmas Eve.

The restrictions come as every other state and territory over the weekend rushed to bar travellers from greater Sydney and the Central Coast from entry.

Some also blacklisted visitors from Wollongong or the entire Illawarra/Shoalhaven.

Northern Beaches residents remain under stay-at-home orders last imposed back in March at the height of the COVID-19 crisis.

The 2020 Sydney to Hobart Yacht Race has been cancelled due to the COVID-19 outbreak.

Several European countries have placed new restrictions on travel to and from the United Kingdom due to concern over a new strain of the coronavirus that is spreading rapidly there.

Belgium said it would close its borders to trains and planes coming from the UK, while the Netherlands and Italy also suspended flights.

Ireland will suspend all flights from Britain from midnight Sunday local time.

BREAKING: Sky News understands the French government is holding an emergency meeting to discuss stopping people travelling to the country from the UK.

The UK government tightened its COVID-19 restrictions for London and the southeast, disrupting the Christmas holiday plans of millions of people.

Germany will impose restrictions on flights from Britain and South Africa - which has also detected a new coronavirus strain - a health ministry official said.

Austria is also planning to ban flights from the UK, the APA news agency said, citing the country's health ministry.

Otherwise it would act unilaterally to defend its interests and citizens, the Madrid government said.

Like other countries in Europe, Britain is battling to contain new waves of the virus. It reported 27,052 new COVID-19 cases on Saturday, taking the total over two million, and 534 more deaths, taking the official toll to more than 67,000.

In addition to the measures announced for England, the United Kingdom's other nations, whose response to the pandemic differs from that of England at times, tightened restrictions.

Scotland has imposed a ban on travel to the rest of the United Kingdom.

Rockets target US Embassy in Baghdad.

At least three rockets have targeted the US Embassy in Baghdad's heavily fortified Green Zone, Iraqi security officials said, sparking fears of renewed unrest as next month's anniversary of the slaying of an Iranian general draws near.

#Iraq
US embassy’s C-RAM counter rocket 🚀 system has gone active for a while now. pic.twitter.com/CN945TDcuu

It was not immediately clear if there were any casualties. The officials spoke on condition of anonymity in line with regulations.

The C-RAM system was installed by the US over the summer as armed groups stepped up rocket attacks targeting the embassy and its premises.

The US withdrew some staff from its embassy in Baghdad earlier this month, temporarily reducing personnel ahead of the first anniversary of the Washington-directed killing of Iranian General Qassim Soleimani outside Baghdad's airport on January 3.

Officials said the decision stemmed from concerns about a possible retaliatory strike.

The Star Southside Flyers have cried tears of joy after beating the Townsville Fire 99-82 in the WNBL grand final.

Liz Cambage and captain Jenna O'Hea were in tears while being interviewed, recalling their experience after the Bulleen Boomers win of the 2010/2011 WNBL title.

"I sent Jenna a text message back in March. I saw a photo of us celebrating the Boomers grand final 10 years ago and I sent it to her and I was like, 'Jenna, I want this again'," Cambage told Fox Sports.

"I hadn't even thought about signing yet, I just wanted that moment again with Jenna. She's one of the best leaders, the smartest players, and just an all-round amazing athlete. I'm just so happy I got to do it again with her."

“Until today 2020 has been a roller coaster for everyone so to finish this way with this group of girls, there’s no better feeling," says @SouthsideFlyers captain @JennaOHea.

The Fire opened up an early five-point lead, but Leilani Mitchell's two long bombs late in the opening quarter helped tie the scores up at 22-22 at the break.

The star guard exploded in the second quarter with another three long bombs.

Mitchell had 21 points to her name by the long break on 5-of-6 shooting from three-point land, helping her team gain a 48-46 edge.

Cambage picked up her third foul early in the third quarter, but she overcame the setback to go on a scoring rampage.

Southside's lead grew to 10 points heading into the final quarter and they were never headed from that point on.

- US President Donald Trump has denied reports he talked about imposing martial law in some US States, forcing them to "rerun" the election, during a White House meeting last week, calling The New York Times report "fake news".

- At least four people have died as Tropical Cyclone Yasa, a category five cyclone, tore through northern Fiji. The storm made landfall last Thursday and has left a trail of destruction, leaving people without shelter and fresh water, Fiji Red Cross says.

- Nigerian police say they have rescued at least 84 school children who were abducted by gunmen on Saturday.

Reply
Upvote
1 upvotes
Fair dinkum this woman takes the cake. Why can’t she make a decision. No chanting except at a religious meeting place, well where else would someone be going to chant. I think they will survive not chanting at the moment. Then we ‘encourage’ masks to be worn why not enforce it. It’s pathetic she needs to get the bull by the horns. She needs to look at free movement within NSW the regional areas need to be protected. This is no time for flipping and flopping has Gladys learnt nothing from the Ruby Princess government debacle. Besides whichever god people so desperately have to worship none of them have saved us from this virus, people need to get a grip. The virus will enter a church as much as a shopping centre.
News
General
Opinion
True Crime
Politics
Sport
Explainer
Entertainment
Celebrity
Reality TV
Movies
TV
Books
Rogue
Royal
Lifestyle
Beauty
Fashion
Weddings
Home
Wellness
Health
Fitness
Travel
Food
Parents
Before The Bump
Pregnancy
Baby
Kids
Teens
School
Parent Opinion
Work & Money
Money
Finance
Career
Lady Startup
Relationships
Sex
Dating
Separation
Friendship
Family
Real Life
Couples