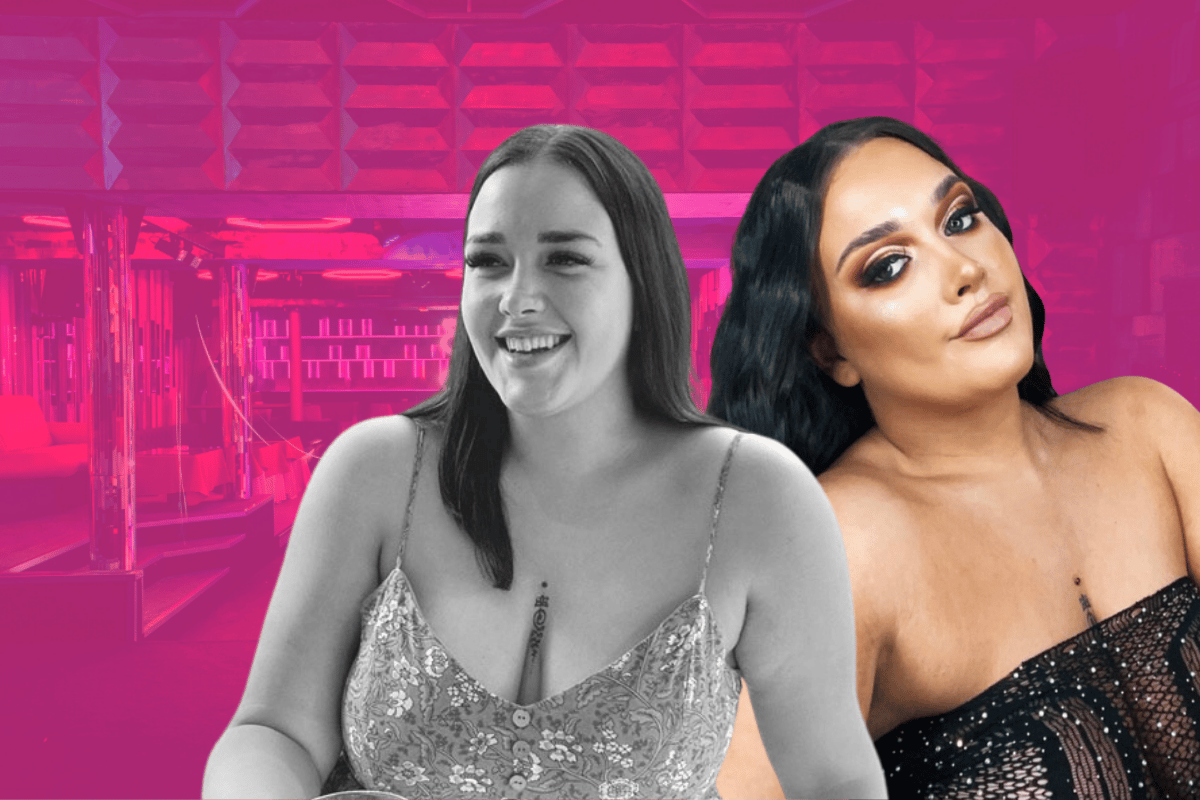 This post deals with assault and may be triggering for some readers.

After working as a stripper for a year, Reign Renoylds knows one thing to be true; "It’s nothing like the movies."

"I walked into this job thinking that it was just going to be stacks on stacks... and a party every weekend, but it's really not," she told Mamamia.

The 19-year-old works at a strip club in Brisbane, and shares her day-to-day life on TikTok with her 200,000 followers.

But while Reign says stripping isn’t like what we see on TV, it was actually movies that first got her interested in it.

"I watched a lot of dancing movies growing up and that just made me think, 'Oh wow look how much money they make, and they get to look pretty and they get to dance.' So as a kid I thought I want to do that."

"The sexual side of it didn't bother me, having to actually be naked was never a problem."

It wasn't until after she finished her nursing diploma and left a toxic relationship, that she decided to get into stripping.

Watch: Things you want to know about escorts. Post continues below.

"During that relationship, I got rid of all my friends and I pushed them away. So when I was freshly single, I needed something to do, and I didn't want to work a normal job. So I thought this was the perfect time to get into the industry and give it a go."

And as she knows, working as a stripper certainly isn’t your typical nine to five job.

For one thing, her shift starts at 9pm. And the prep starts hours before.

"I work from Thursday to Sunday. So on Wednesday nights, I try to stay up as a long as I can to change back over to the night shift… and then I'll try to sleep in during the day on Thursday."

"As soon as I wake up, I start prepping to wash my uniform. I make sure my shoes are clean, make sure my nails are nice, my hair is washed and brushed."

When 6pm hits, she starts getting dressed and ready for the night.

"It takes me an hour to my hair and an hour to do my makeup. And then I'll go pick up one of the girls who lives near me. We start work at 9pm, so we get in around 8:40pm."

After walking through the door, Reign pays the club $30 in house fees, which covers expense like her locker and pole hire for the night.

"After we pay our house fees and go down to our locker room, we then like to just freshen up with our makeup and get changed into what we’re wearing that night."

"Then I go straight to the bar and grab a drink because most of your clientele will probably be at the bar. I just keep going around and I'll talk to as many customers as possible. If I get lucky, I'll go for a dance and if I don't get lucky, I’ll go on stage.

"Once I'm done on stage, I'll have a 10-minute break. I try to have my break early because from 12am to 3am is when we're really busy and they're money-making hours. If I haven't been booked then I just keep going around the bar and go on stage, and basically repeat that the whole night."

For Reign, the best part of the job is being booked in the club’s VIP room.

"I really like the VIP room, because sometimes it can be really awkward just doing a one-on-one dance with customers on the floor. But in VIP there's multiple girls and people and it's just like a party in a room which is really good."

After work, she'll leave the club and take an Uber back home.

"I’ll get home between 4 and 4:30am, have a shower and go to sleep. And then I repeat that for three nights."

"So it's not an easy job. It's really time-consuming as but people underestimate it what strippers do."

After a typical night, Reign would usually pocket around $700 to $1500. But like many industries, the pandemic has unfortunately seen her income dry up.

"The money has gotten worse and worse to the point where sometimes you walk out with nothing or you're lucky to make $200.

"Sometimes I don't even any money for the entire weekend, and the next weekend you'll make $1500. And then the next week, you get 20 bucks... it's definitely not a stable income at the moment."

Out of the money she does make, Reign has to put a large chunk towards her outfits, shoes and beauty supplies.

"The club does not offer you anything at all, so you have to buy everything yourself like deodorant, bandaids, fake tan, eyelashes, nails, hairspray, perfume, dry shampoo... basically everything that you think that you would need to get ready on a night out."

"And when you're using it four nights a week, I go through so much perfume because you're constantly freshening up. So it is actually really, really expensive to maintain and a lot of people don't understand that. Like you might make $500 that weekend, but a lot of that gets spent back on yourself."

In fact, Reign says it easily costs her between $300 and $500 a month to maintain everything.

But despite the unstable income, she loves the sense of community that comes with the job, not only from the other girls and staff but also from her regular customers who she forms friendships with.

However, there are customers who aren't as friendly, and instead body-shame the workers, which is sadly something Reign regularly has to deal with.

"Some of the clientele that come in can be absolutely horrible... They'll tell you straight to your face that they don't like what you're wearing, or if they don't like you, or if you're too big for them, or you're too tall or to short for them. And they don't see anything wrong with it at all."

"For me personally, the body shaming is kind of what gets me more than anything else... It's really horrible, but it's just one of those things that unfortunately, you just kind of have to brush off."

For that reason, Reign says confidence is key to surviving in the industry.

"If you have this job, and you have no confidence, it's not going to work. And you're definitely not going to last long. And it's so sad but you have to like the way you look because when you get hate, and when these men are telling you, 'you're so fat' or 'you're so ugly', it doesn't bother you as much."

Another thing she wishes she knew before starting the job is how common assaults occur.

"I didn't realise how common [being assaulted] was going to be. I didn't think it was ever going to be nearly every single shift."

Reign says her club has processes in place to deal with incidents when they happen.

Aside from those who don't follow the rules, Reign and the other girls are also able to refuse any customer, including those who are rude or have poor hygiene.

"You can decline anybody. You're not forced to dance with someone."

If someone doesn't have the best hygiene, it's referred to as 'dirty money'.

"If you really want that dirty money, then you obviously just suck it up and hold your breath. But if they smell so bad, you genuinely like you don't have to do and so you can, you can decline."

For those thinking about pursuing a job in the same industry, Reign has some important advice:

"Don't compare yourself to the other girls at work. Obviously, there are a lot of girls who are really good at their job, and there are girls who aren't so good at it, but still make good money. You just can't beat yourself up over it... and know that money does come in waves. Definitely do it because you want to do it, not because you know someone else who's doing it."

"You've also got to be able to look out for your mental health... because this job is so mentally draining."

And for those who don't support the industry, Reign says, "just give it a chance and give it a go... and be opened minded about the topic.

"A lot of people who hate it are uneducated on it, so if you take the time and learn about it, it could change a lot of your opinions on the industry."