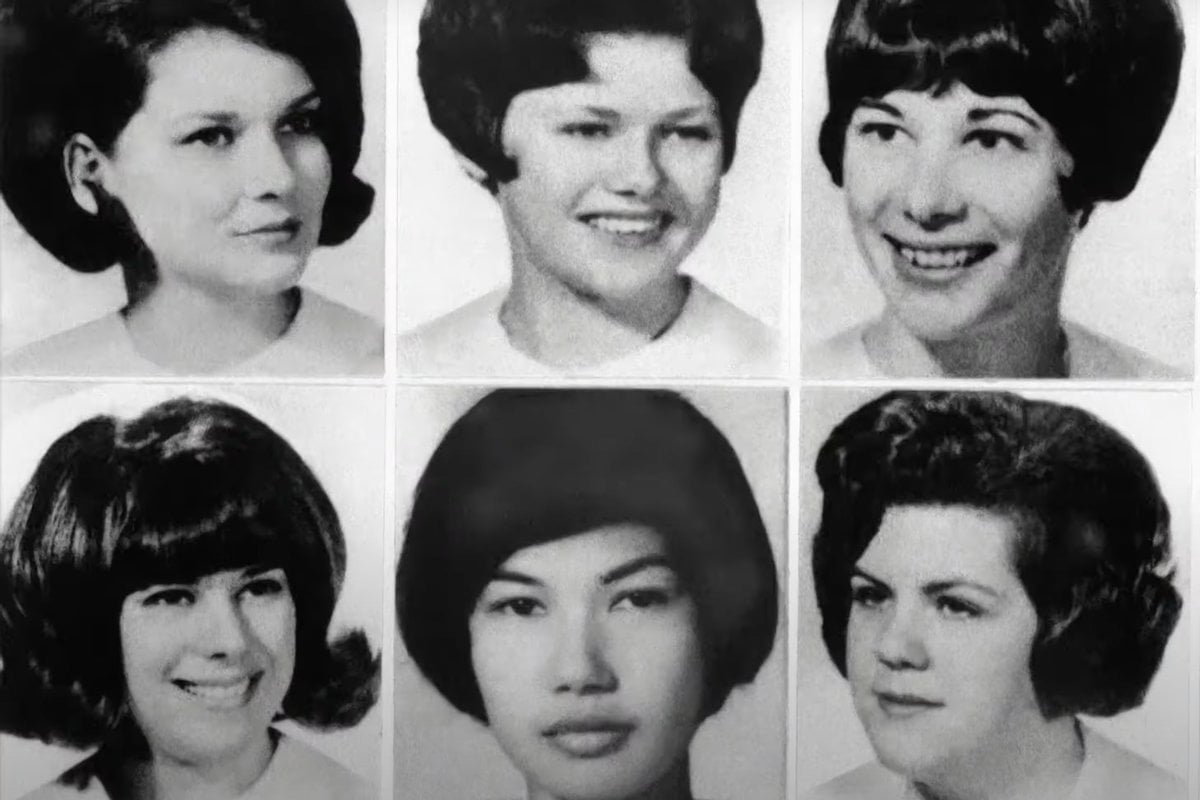 July 13, 1966, was the night that introduced a terrifying new concept to Americans: random mass murder.

It all started with a knock on the bedroom door of student nurse Cora Amurao, who shared a Chicago townhouse with other student nurses.

It was 11pm, and Amurao, who had moved to the US from the Philippines less than three months earlier, unlocked the door and opened it.

Standing there was a young blond man, Richard Speck, holding a hunting knife and a pistol. He had broken in through a downstairs window. Speaking quietly and calmly, Speck ordered Amurao and her roommate out of their room.

He gathered six student nurses together in one bedroom and bound their wrists and ankles with strips of torn sheets. When three more student nurses arrived home, Speck also tied them up.

Because Speck was quiet and calm, almost friendly, the women didn’t think he was going to hurt them. They thought he was just robbing them. He said he needed money to get to New Orleans.

But he was lying. Speck untied one of the women’s ankles and led her out of the room. Those left behind heard her muffled cries.

Amurao, still bound, crawled under a bed in the room and hid, hoping that Speck wouldn’t realise she was missing.

"After he was taking these girls, one by one, outside that big bedroom, that’s when I realised he was doing something to them. But I never thought that he was killing them."

Over a period of four hours, as Amurao lay under the bed, Speck led away seven of the student nurses, strangling and stabbing them. The last of them he raped in the room where Amurao was hiding, before killing her too.

Nina Schmale died that night. She loved Elvis, cats and the colour pink.

Pat Matusek also died. She had nursed her dying cousin when he was a teenager.

Pam Wilkening. Serious and studious, she was focused on her upcoming exams. Mary Ann Jordan. She had a close bond with her younger brother with Down syndrome.

Suzie Farris. She was planning her wedding to Mary Ann’s older brother, a teacher.

Tina Pasion. From the Philippines, she was known as a good cook.

Merlita Gargullo, another nurse from the Philippines, had a beautiful singing voice.

Gloria Davy. She was president of the Student Nurses Association of Illinois.

Speck was a drifter. He’d grown up being abused by his alcoholic stepfather and had started drinking at the age of 12. He was first arrested for trespassing when he was 13 and went on to do time in jail for forgery and burglary.

When he got out of jail, he worked briefly as a sailor. He murdered a barmaid, Mary Pierce, and was questioned over it, but managed to evade police.

On July 13, 1966, he raped a woman at knifepoint and stole her pistol. That night, he broke into the townhouse where the student nurses lived.

Speck left after killing the eight women. Amurao eventually worked her hands and feet free and came out from under the bed around dawn. She discovered the bodies lying around the townhouse.

She stood on the ledge outside the bedroom window, screaming, "They are all dead! My friends are all dead! Oh God, I'm the only one alive!"

A traumatised Amurao gave police a description of Speck, including a tattoo he had on his arm, reading "Born to Raise Hell".

Police noticed the knots used to tie up the women were nautical and guessed the killer was a sailor. They went to the seaman’s union, and once they mentioned the tattoo, someone gave them Speck’s name.

The story was all over the newspapers, with his name and photo. The killings were dubbed "the crime of the century".

Two days later, Speck attempted suicide in a hotel room and was taken to Cook County Hospital. In the emergency room, Dr LeRoy Smith treated his wounds and thought he looked familiar. As he wiped away blood from his arm, he saw the tattoo: "Born to Raise Hell".

"Are you the man police are looking for?" Dr Smith asked.

He was arrested and put on trial. Amurao was called as a witness.

"I went to the door... I unlocked it... then I saw a man... with a gun in his right hand pointed towards me and I noticed that he had marks on his face... and his hair was blond," she told the court.

She was asked to point him out if she could see him in the courtroom. She walked up to the defence table, and pointed directly at Speck, her finger just inches away from him: "This is the man."

It took a jury just 49 minutes to find Speck guilty.

He was sentenced to die in the electric chair, but when the death penalty was abolished, his sentence was changed to eight consecutive terms of 50-150 years — up to 1200 years in jail.

"It really was the end of an age of innocence. It changed everything. We all became much more conscious of our security. Eight nurses could be slaughtered in their beds for no reason by a stranger."

Speck claimed for years that he couldn’t remember what happened that night, that it was all a blur of alcohol and drugs. But a video shot in prison shows someone asking, "Did you kill them?" and Speck replying, "Sure I did."

When asked why, he said, "It just wasn’t their night."

Speck died in prison, in 1991, from a heart attack. Soon afterwards, Amurao did her first TV interview, with ABC7. She explained why she had waited so long.

By then, Amuroa was married and had two children. She continued working as a nurse in Washington, D.C. until her late sixties. Her daughter Abigail also became a nurse.

According to the Chicago Tribune, she still suffers nightmares about that night.

"I think there was somebody up there who was hiding me from him," she said. "God was so nice."