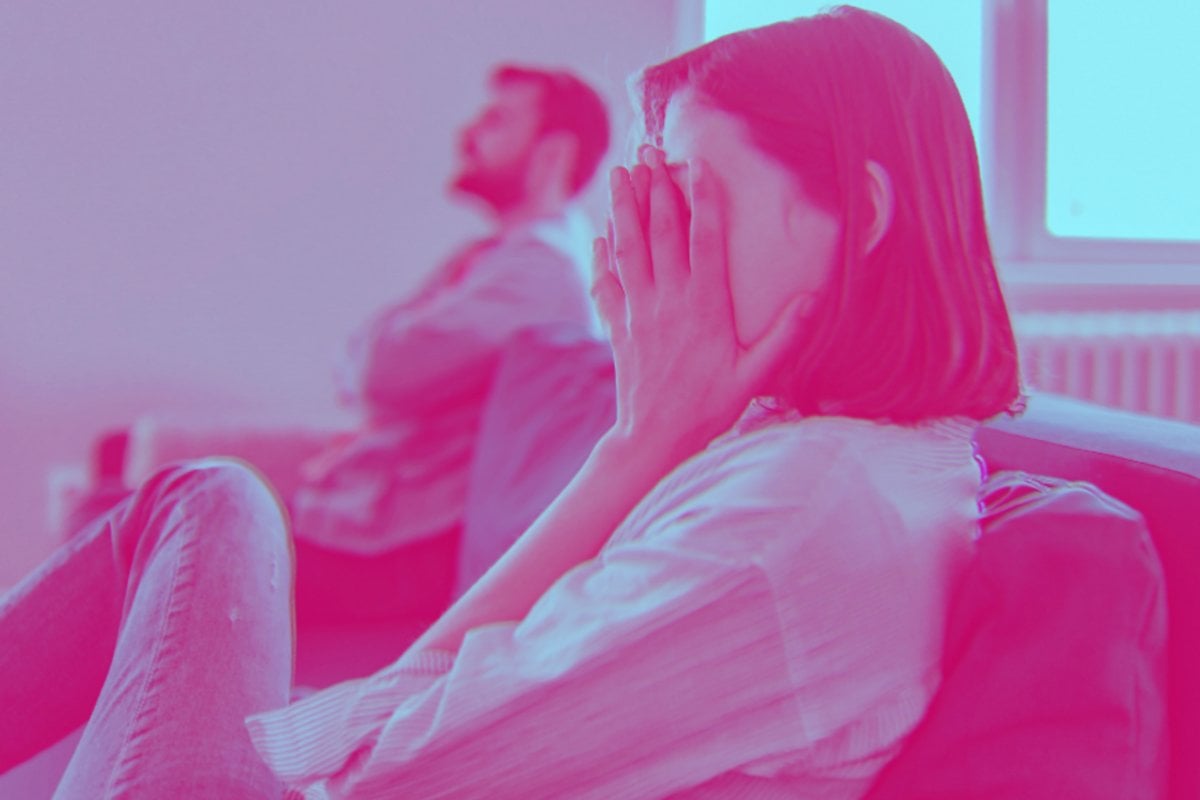 A couple of years ago when I was pregnant with my second child, I was watching the BBC series ‘The Split’ and the main character Hannah said something that blew my mind.

Another character, pregnant with their first child, asked Hannah if she had children. “Three”, she replied, “each one like a grenade in my marriage”.

Side note: Some of our favourite celebrities on parenting. Post continues below.

I had my first baby six years ago, and my second 18 months ago, both with my husband whom I’ve now been married to for almost 12 years, and in a relationship with for almost 17 years.

Our beloved, adored children were both grenades in our marriage.

Both pregnancies were hard on me. I was not a glowing, blissful, Instagrammable mama to be; I was a bloated, exhausted, anxious mess with incontinence, flatulence and the worst heartburn of my life.

And I’m not even going to talk about childbirth, such an insanely fraught topic. Suffice to say one birth was quite horrendous, the other was fine, and I realised both times that birthing children (any which way you do it) is an incredibly courageous thing to do.

Both children were absolute gifts. My husband and I experienced that heart-melting love we’d been told about, and even when they drive us nuts we still experience these feelings almost daily as parents.

But they were also the most difficult things to ever happen to us as a couple.

Any notion that a child would bring us closer together swiftly exited the building when we found ourselves confronting our inadequacies as people and parents (and taking these out on each other), mining through recurring memories of difficulties from our own childhoods, and bickering over whose turn it was to get an extra 30 minutes sleep that day.

In our case, throw in some post-natal depression for me and you’ve got a big, fat, difficult mess.

No one tells you this is what it’s like, and frankly I’m not surprised. When friends say they are having their first baby, my response to the news is - of course - joy and excitement, because I truly feel those things.

But if I’m honest, I also feel worried for them - I’ve seen so many friends' marriages taken to the edge, or over it, because parenting small children is hard. And taking on those roles of ‘Mum’ or ‘Dad’ leaves very little time for the roles you previously held in each other’s lives.

How do you know if you're ready for another baby? Leigh Campbell and Tegan Natoli talk it out on This Glorious Mess - Little Kids. Post continues below.

In the case of hetero-normative relationships where a child is involved, one thing I don’t think we ever talk about is how completely overwhelmed fathers can be by their new role.

I know it’s easy to dismiss this - after all, they didn’t have to grow, carry and birth the baby, and they don’t have the societal expectations of being an earth-mother goddess that breastfeeds perfectly, loses baby weight instantly, and loves every moment with her new child.

But, they are also not encouraged at all to talk about how big the change is and how it impacts them.

I know lots of women struggle to find their tribe after having a baby (judgey mother’s group anyone?), but we seem to collectively have an understanding that new mums do need a tribe and lots of support.

I was blessed to have two friends with babies around the same age who were my touchstones when I had my first.

They were going through what I was going through, and we helped each other normalise the feelings and fears (we also collectively hated on our husbands sometimes, and that was a big help).

My husband really had no one, and I think this is pretty much the norm.

I see men I know grappling with the way they were raised and struggling to understand choices their own parents made, for the first time in their lives.

Having their own little human has made them question their own upbringing, and it’s confronting. They want to be better parents but are terrified they’ll fail.

I see men I know resist the change to their primary relationship, hate that they are no longer their partner’s first priority, and become hostile because they are hurting.

I see men I know petrified at the huge increase in responsibility they now feel - for so many this seems to manifest as huge financial anxiety.

And who do they talk to about any of this? Often their partners are too busy and exhausted to talk, and they can’t take on more stress.

There are very few ‘father’s groups’ that pop up in which men can share these experiences of apocalyptic change.

I offer no solution to any of this, but I do think we need to talk about both the difficulty and the joy of having children. We need to tell our expectant friends that it will be the best and the hardest thing they’ll experience.

And we need to start normalising the relationship problems that occur, and the complex emotions both parents experience and need support with.

Reply
Upvote
I think one of the important things to before kids is to work through your issues from your childhood. Often that has the biggest impact on how you parent and it’s amazing how many issues come up because having kids brings them up. I think that has been a blessing in our family that we did this before kids. This has helped when triggers come up with our own child and we’ve been in a better space to work through it
monicaz 2 months ago