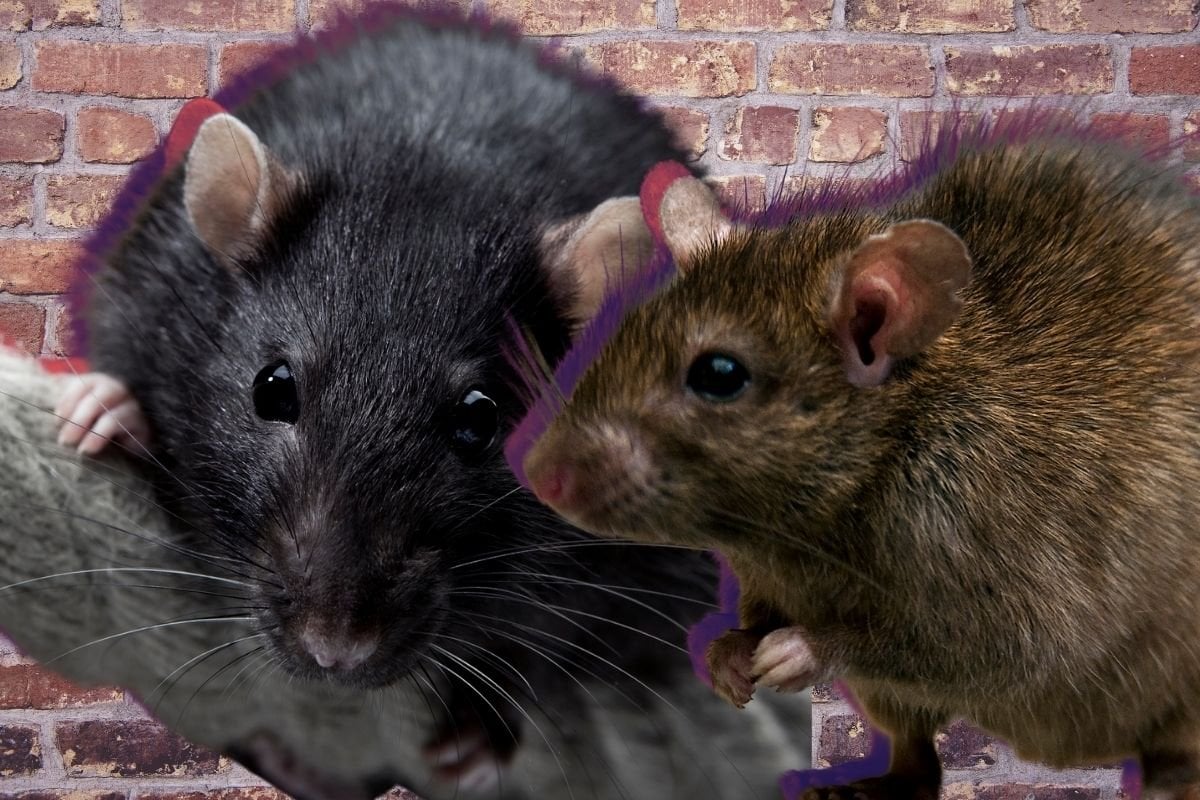 I have two stories, and yes, they're both about rats.

Now, I'd like to preface this by saying I love all animals. Even bats.

But I think we can all agree that rats (and to a lesser, but still significant extent, mice) have a hidden agenda.

They always have somewhere to... be. And no one knows where. But they're going fast and their confidence is perplexing given that their tails are oily and their faces are horrifying.

Before we get into the rat stories, however, I need to get a few important points out of the way. 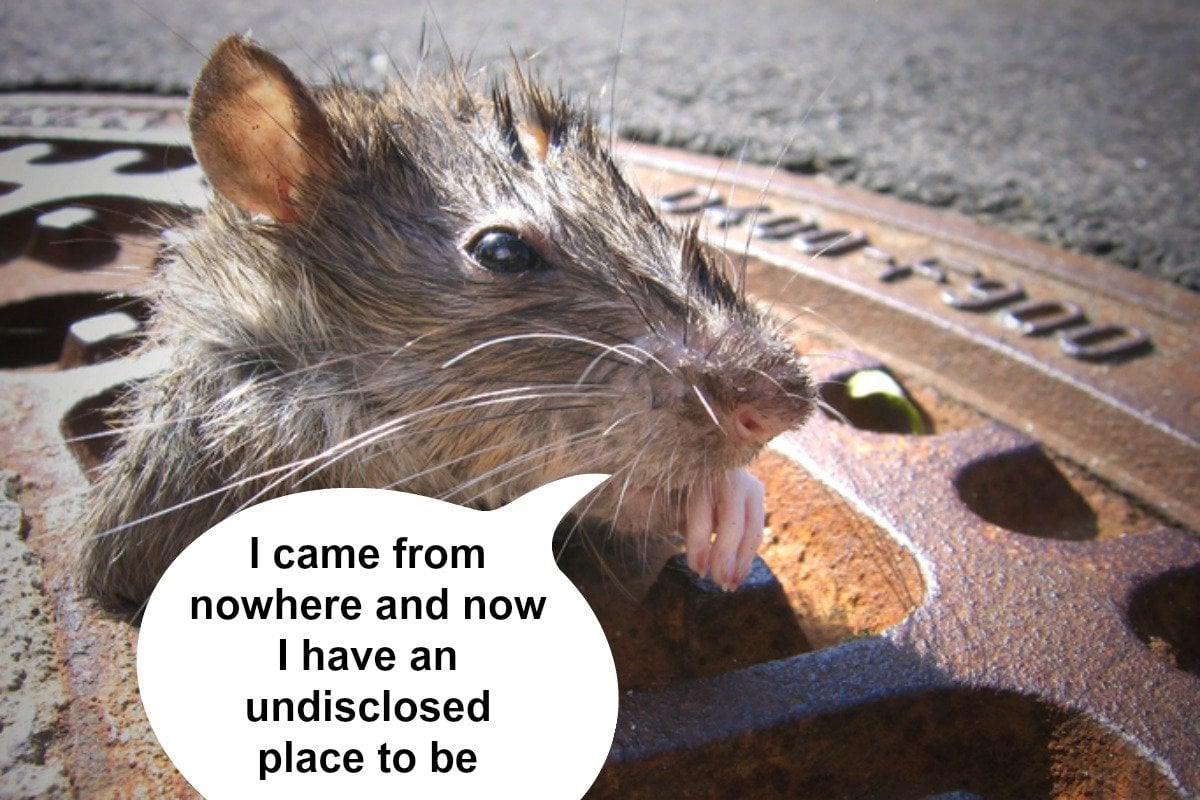 Everything is wrong with you.

2. Your tail does you no favours and it would help to brush your hair once in a while 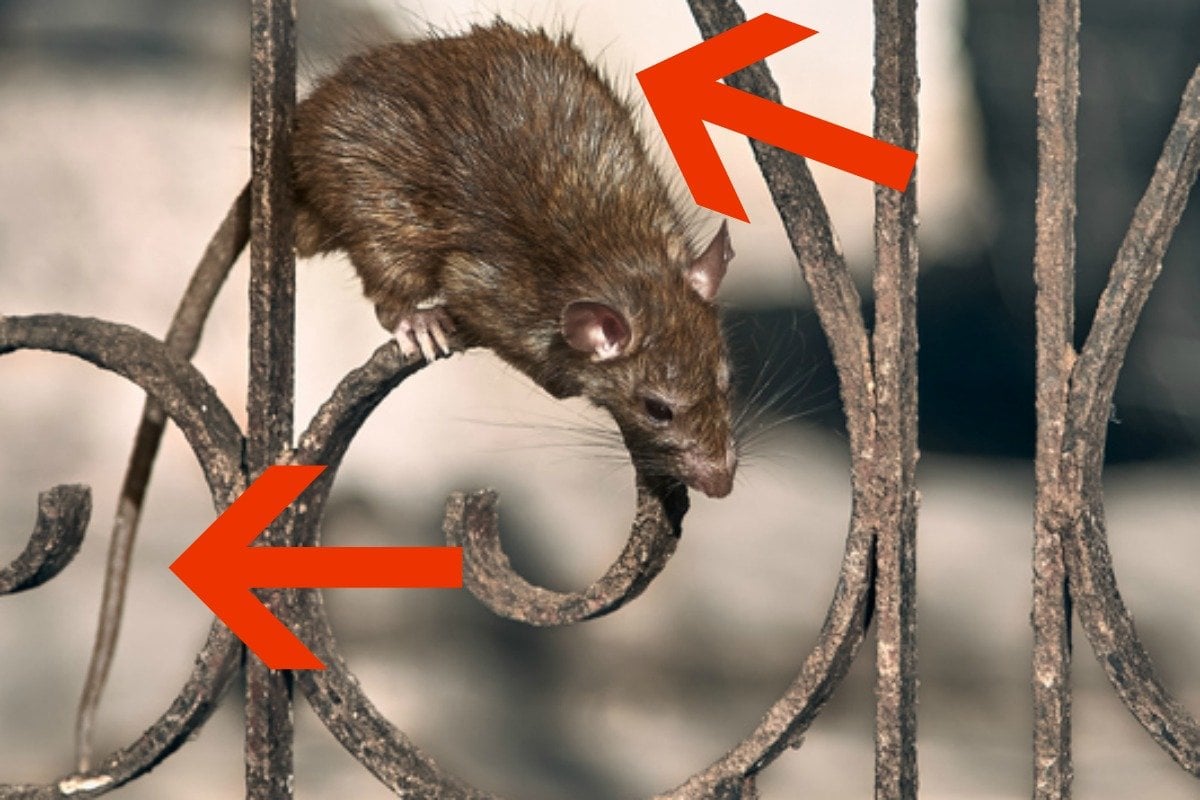 3. I hate that you can get into any hole you want. I hate it. 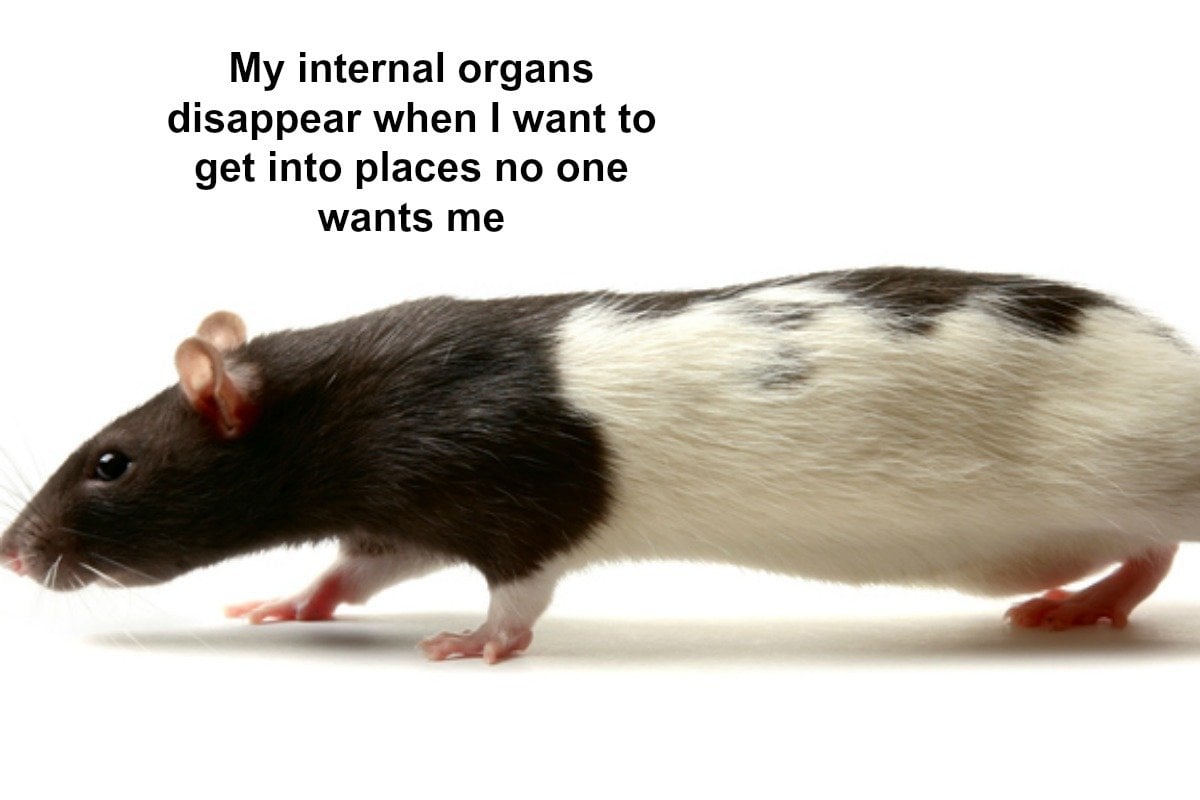 Now that we have the key facts established, the stories.

'The rats are guilty. All of them.'

The first happened in August of last year. A 45-year-old handyman named Robert Petersen was tasked with installing a new wall at a building in the West village. He was told it would involve cleaning up rat droppings, so asked for protective gear. His boss allegedly told him to stop being a "baby," and just do the job.

As he was working, he said he was cleaning up "rat feces and rat urine on soaked pieces of insulation".

Speaking to the New York Post, he explained, "There were dead rats and there were [live rats] running all around me. They were trying to come out when I was trying to plaster it".

But that wasn't the bad part. That was... fine.

The problem came when he was called back to do another job to repair a hole in the ceiling. He wasn't given protective gear, and said when he put his head in the hole while fixing the ceiling, "the rats were running around my head".

AS HE'S WORKING ON IT.

The ceiling falls. In. On. Him.

"The whole thing came down on me — rats, feces, you name it," he told the New York Post. "You cringe. I don’t like rats, mice, I don’t like any kind of rodents. I was disgusted. You feel grossed out. You are itching and scratching."

He was covered in welts and then started vomiting which landed him in hospital. And yeah he's... suing. About it.

I'm not a lawyer but I say every single one of those rats is guilty of conspiracy to be gross.

So on the one hand, we have a man who had rats rain on him from the ceiling.

Because in October, a 33-year-old man named Leonard Shoulders was waiting for a New York City bus when he fell into a sinkhole. But not just any sinkhole that happens to exist on the footpath in a major city in a first world country (wtf).

After falling 12 feet, the place he landed has been described as variations of the following:

A den of horrors

A dark and narrow vault filled with rats

This is how I envision it, except dark, so you don't know when a rat is going to brush past your lips or nuzzle in your neck. 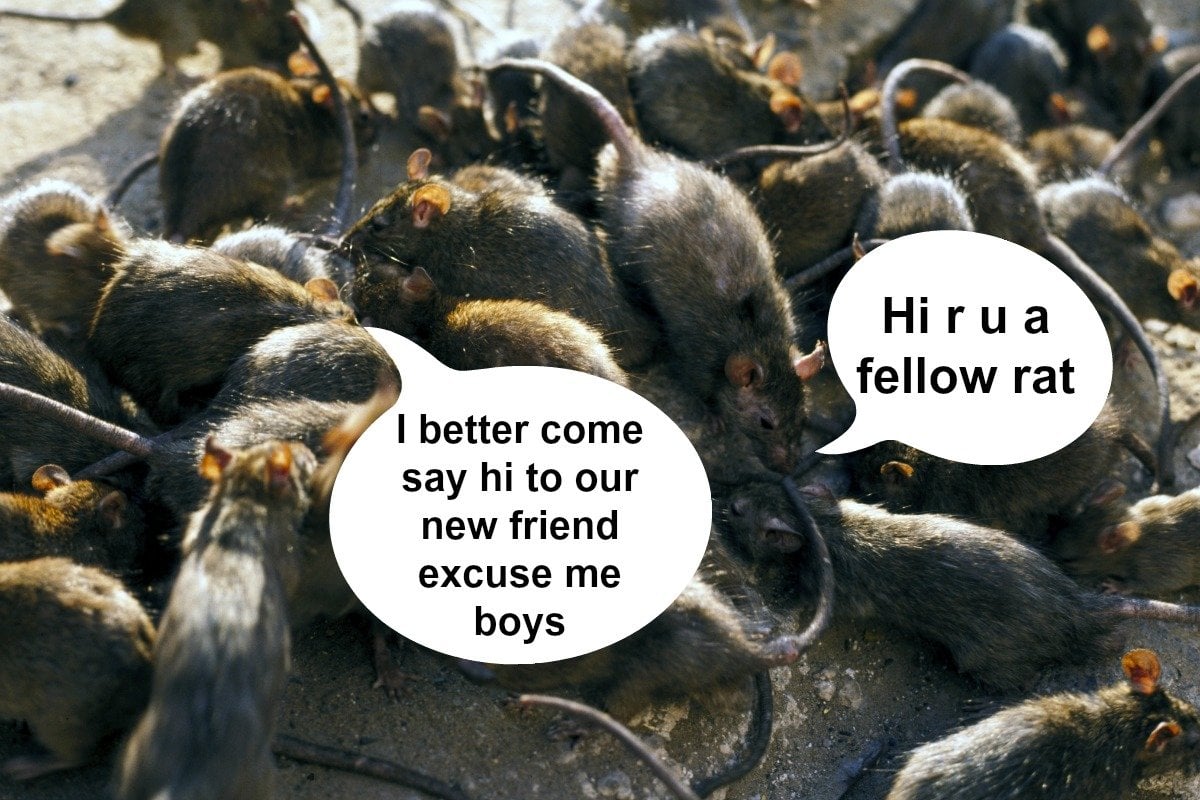 WHY ARE YOU ALL MOVING YOU HAVE NOWHERE TO BE

Shoulders sustained serious injuries to his back when he fell, and it took 30 minutes for fire fighters to get him out.

His attorney told Gothamist, "These rats were crawling all over him and he was fearful of screaming out because he didn’t want them to go in his mouth or further agitate them".

He couldn't yell because the rats would have crawled into his mouth and sir I don't know how to say this but you should be suing... harder.

It's unclear how much the man is suing both the landlord of the building and the city for, but I would estimate that one trillion dollars would be reasonable, given that he fell into hell.

'Please take all the money.'

Of course, these two lawsuits, both unfolding at the same time, give rise to a highly important philosophical question:

There are two ongoing rat lawsuits in NYC, filed almost a year apart. In the first, a "ceiling full of rats" collapsed on a man's head. In the second, a man plunged thru a sinkhole into a pit of rats.

Let us now consider: Would you rather fall on rats, or have rats fall on you? https://t.co/RB30nK3F7s

Would you rather fall on rats, or have rats fall on you?

I'll start by saying that on the surface, it definitely seems more favourable to fall on rats, because then you're in a position of power.

But when you consider the intricacies of these two cases, and factors like the dark, inescapable sinkhole, and physical injuries that stop you from being able to move, I'd rather have a ceiling full of rats collapse on me.

seems like the probability of getting bitten by rats is higher if you fall on them because you're invading their territory; if they fall on you they are too shocked to bite?

I’d rather have rats fall on me because, while unpleasant, it’s an easier situation to escape for both me and the rats

The moral of the story is, of course, that rats are fur demons with eyes full of plans and tails full of sneakiness.  And thank f*ck we live in a country where the only things we have to worry about are the world's deadliest snakes and spiders.

Literally anything is better than this. 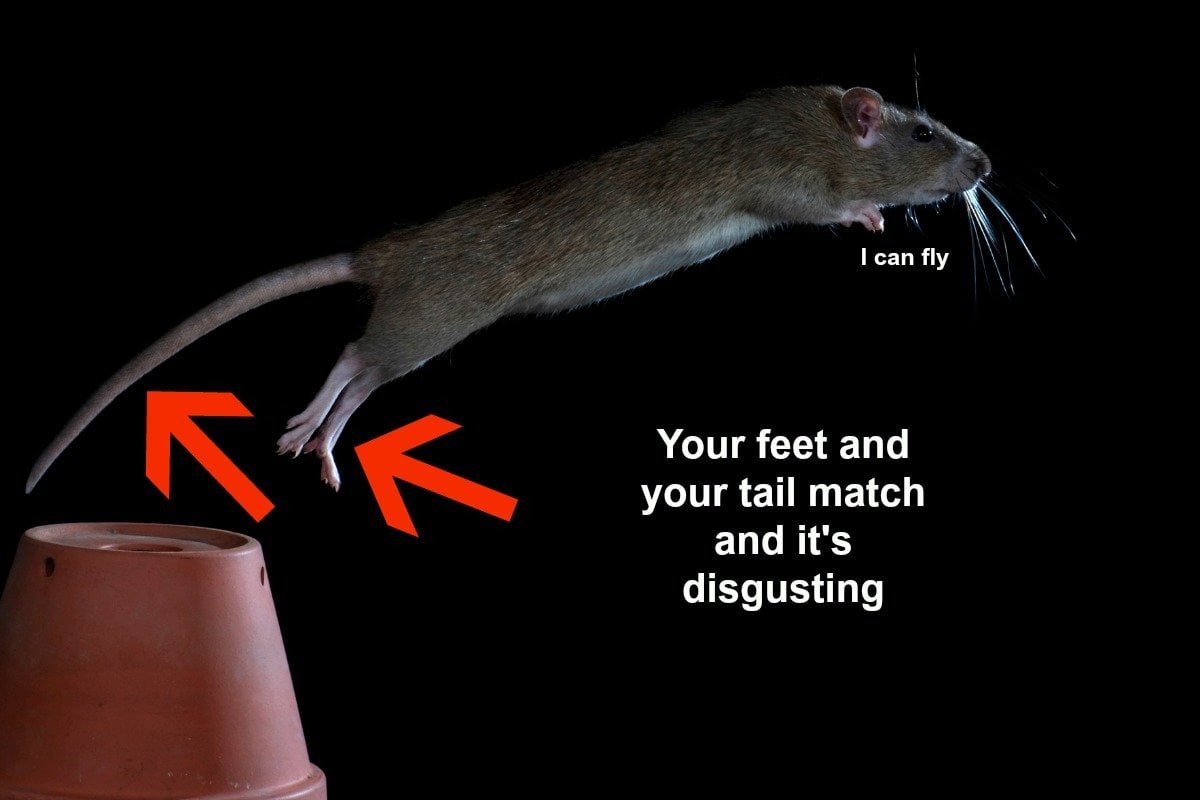 Being able to jump is not in your job description.