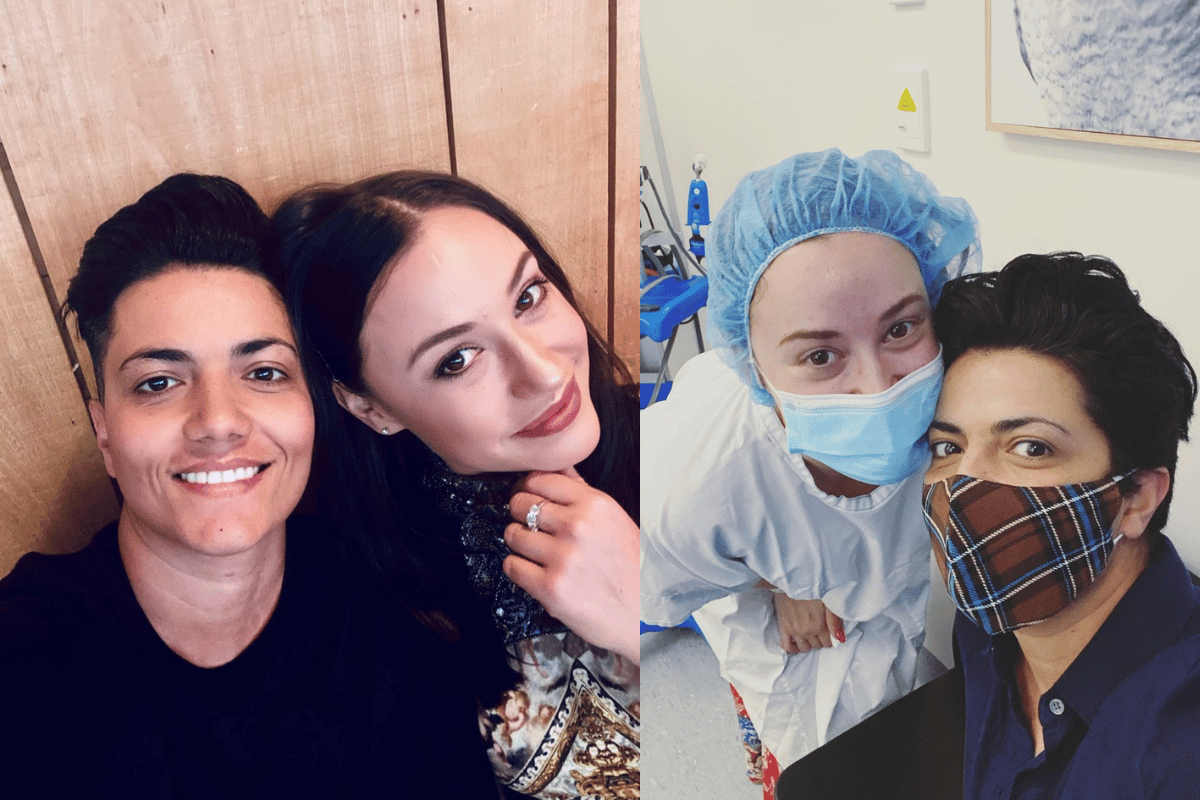 Before Paris Rodgers decided to undertake the IVF route, she wasn't always so sure about children.

She wanted to be in a place of financial stability, absolute independence but most importantly she wanted it to be with the right person at the right moment.

For Max Jahufer though, he wanted kids for as long as he'd known Paris, and he wanted to share it all - the duties, difficulties, immense challenges, and innumerable victories of raising a family - with her.

When Paris turned 29, it was then that she decided she was ready to start a family.

"Meeting Max, getting older and seeing how important it was to him made me realise I don't want to go through life without having children," she explained.

Only now, looking back at the age of 30, she wishes she had started her IVF journey sooner.

Watch a 3D animation of how IVF works. Post continues after video.

The process of IVF is a difficult and emotionally charged one. For some couples, it can take multiple attempts before an egg carries successfully. In Paris and Max's case - their location and choosing which of them would carry their unborn child carried a major burden.

While the pair discussed who should be the one to carry, the decision was made clear it would be Paris when Max began his transition from female to male.

"I had to make the decision to freeze my eggs, and I was going to, but then I decided to start my transition so that was it for me," he explained.

From there, the couple decided Paris would be the carrier and the pair would also use her eggs.

"I will never have biological kids... I think about it all the time like how is this baby going to deal in a rainbow family, a parent who is trans and they've got a donor," Max shared before adding they'd looked thoroughly for the right donor so the baby would have a mix of both him and his fiancé.

He added: "They're not going to be a normal kid with a normal life in a normal family. I think about it every day."

Before Paris and Max initially dove into their IVF journey, they were unaware of just how difficult it would be.

"We thought it was gonna be pretty easy, honestly," Paris shared with Mamamia.

"You just gotta get started and go through all the motions, and it is what it is, but for the last couple of years, it's been a lot harder - especially [if you are living] in Victoria."

The legislation in Victoria has long been a contentious topic. Before a bill was introduced into parliament back in September - egg, sperm and embryo donors could only donate to 10 women.

While it carried a heavy burden for couples, it especially impacted LGBTQIA pairs who might've wanted to opt for surrogacy to continue with the same donor, but a different carrier.

And in Paris and Max's case, choosing to have a baby during the coronavirus pandemic came to be the largest hurdle of all.

"The lack of donor availability was huge," Max said. "We would have to be on a waiting list for about three to six months just to see the donor list."

Together, they'd sought out the best fertility specialists, the right counsellors and the clinic of their choosing in Melbourne. At the 11th hour, they were given news they'd have just five to six donors to choose from.

"To get to the end of the line [while undergoing IVF processes in Victoria] and be told 'you have to wait' was a waste of time.. time and heartache," Paris and Max shared.

From there, the couple decided to temporarily relocate to Queensland, where laws allow for international donors to contribute egg, sperm or embryos to Australian couples.

He continued: "We sort of thought, 'you know what, we don't really want to wait. We want to get things moving now,' so we chose to go with a completely different IVF group.

"That was on the basis of finding donor sperm overseas, being able to work with a clinic that had partnerships with donors from overseas, and also obviously working with clinics, outside of Victoria, that allowed us that access to those firms overseas."

In Queensland, they discovered the fertility app Addam, which allowed for Paris and Max to search high and low for the right candidate.

"It's basically like a dating app for sperm donors, which is either creepy or amazing... I truly don't know," Max said.

Donors are required to "fill out a massive questionnaire" that noted their interests, details on their life and career prospects. For Paris and Max, the app helped them find the right candidate in the form of a 23-year-old male living in the United States.

"We cared about ethnicity a lot - that's a big one, because I am Latino. We also wanted a clean bill of health, going all the way to a few generations back," Max shared.

While many couples can choose to maintain contact, Paris and Max opted for complete anonymity.

"Our particular situation was we wanted a donor that was completely anonymous. We've never had direct communication," Paris explained.

"He's not interested in staying in the child's life, but he did consent for his details to be released when the child turned 18, which is good."

Listen to The Quicky, Mamamia's news podcast that gives you the top news of the day and then dives right into what you want to know about. Post continues after audio.

In October, the couple had a successful egg collection procedure and ended up with 9 embryos after collecting 10 eggs.

"Usually you only expect 30-40 per cent of the fertilised eggs to make it to embryos, however ours came in at a massive 75 per cent," the pair shared on Instagram.

And in November 2021, Paris and Max received incredible news - a pregnancy.

"We still have to proceed with caution now, awaiting our doctor's phone call following the blood test. Also, keeping in mind that most people keep this information quiet for the first 12 weeks due to the risk of miscarriage (one in four pregnancies during the first trimester)," they shared.

"But we are so ecstatic and if all goes to plan, we will be welcoming a baby into our rainbow family end of JULY!!!"

A difficulty of their journey for Max was watching his partner struggle with the complications of falling pregnant.

"Paris is very active and bubbly and happy, and she has always been doing something whether that's training or whatever... and she hasn't been able to do that," he explained.

He went on to share they had to begin injections while quarantining in a hotel. "We basically had to do lessons on Zoom with the nurse because we never had that face-to-face contact with the doctors. It's crazy!"

Their journey though has been anything but easy and their advice for couples looking to start their own process would be to "start now".

"Even if it's just having a conversation with your GP about your options, it can be simple.