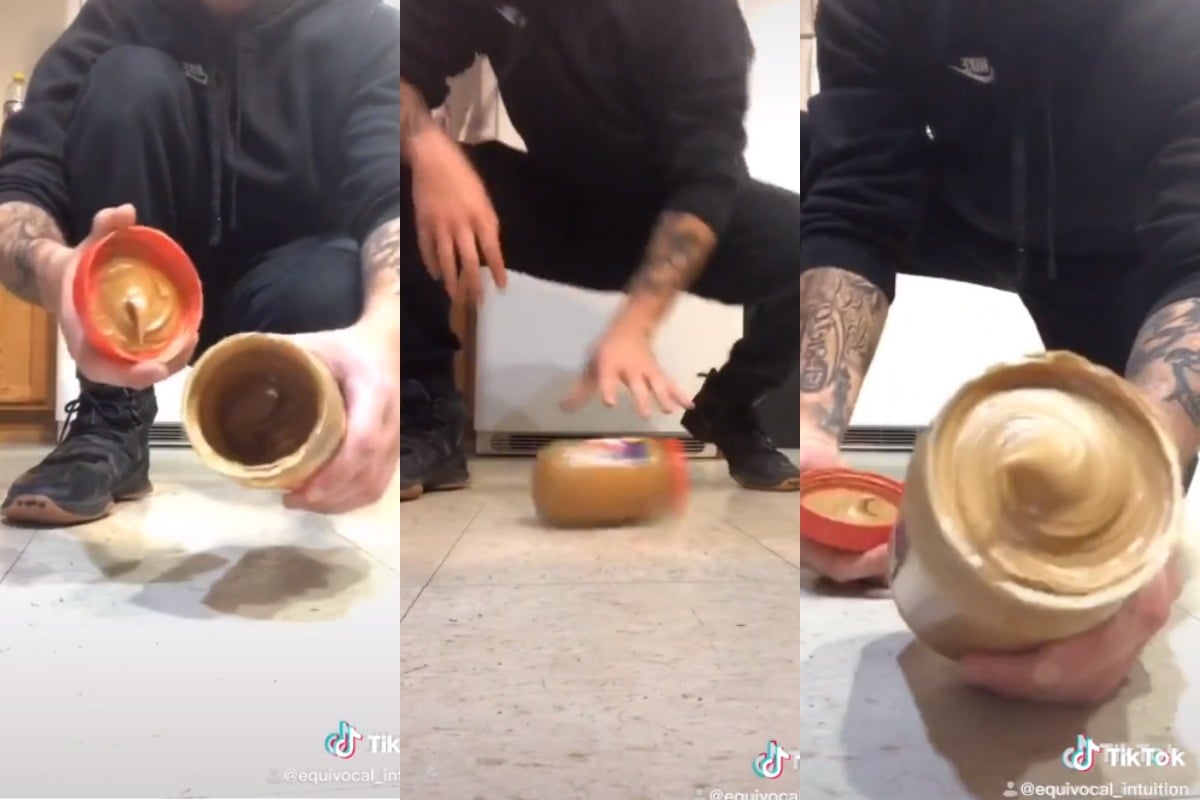 People all around the world are spinning jars of peanut butter on TikTiok. And we need to talk about it. Immediately.

It all started when TikTok user @equivocal_intuition filmed a video showing how he made an almost empty jar of peanut butter look full by simply spinning it... because of science... and stuff. ¯\_(ツ)_/¯

The man did the same with a jar of mayonnaise and a jar of relish, spinning the condiments on the floor a number of times to push the contents to the top.

And of course, the people of TikTok simultaneously lost their minds.

But despite what it appears, the spinning peanut butter hack is more than just another viral TikTok challenge.

In a follow-up video, which has been viewed more than 6.5 million times, the TikTok user explains that it's actually an old trick used to hide money and other items in jars of condiments while in prison.

"This is the oldest trick in the game... this is all old penitentiary stuff," he said.

The man goes on to explain that the trick doesn't work anymore because when guards go to search your food, it's easy to tell something has been placed inside.

But that didn't stop TikTok users from finding a great use for it.

"Okay, but this is a hack for getting the last few bits out the jar?!" one user commented.

"This is just a good way to get the peanut butter from the bottom," another added.

Other TikTok users have also posted videos trying out the hack.

♬ Bring It Around - Sky Summers

##PeanutButterHack it kind of works 😂

So there you have it, we no longer need to spend our mornings struggling to dig out the last remnants of peanut butter to spread on our toast.

It looks like the hours we've spent scrolling through TikTok videos has finally paid off. Well, sort of.

Have you tried the peanut butter hack? Let us know in the comments below.

Reply
Upvote
3 upvotes
Were there people having an immense amount of trouble getting the last peanut butter out of the jar? It's never been very difficult for me. It seems like spinning the jar around on the counter several times would take longer than just...scraping the bottom of the jar with a knife?
R
random dude 2 years ago

Reply
Upvote
2 upvotes
@fightofyourlife Well, just look at you being all fancy and using cutlery ;o)