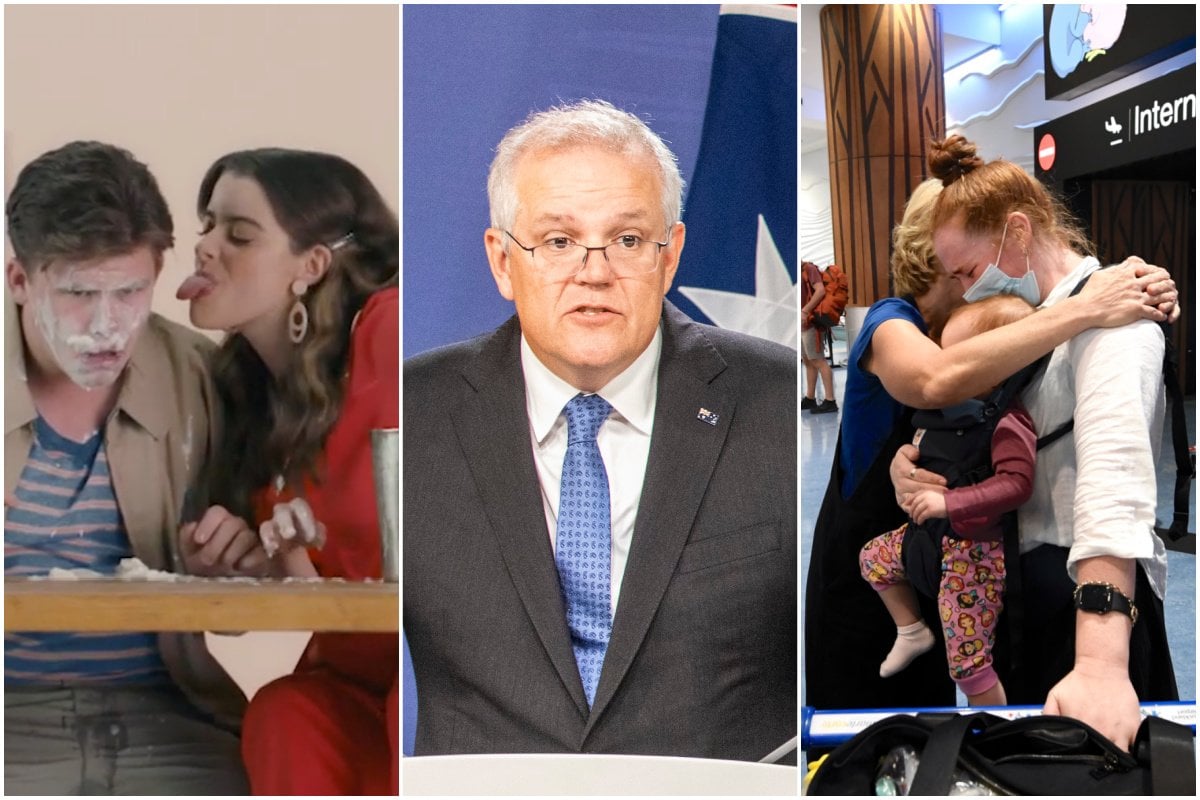 The federal government is under fire from within its own ranks for a "clumsy" video on consent released as part of a new sex education campaign.

In one video published on The Good Society website, a young woman smears a milkshake on a man's face in a bid to convey consent.

WATCH: There’s anger this morning over a Federal Government video that uses milkshakes and tacos to teach children about sexual consent. #9Today pic.twitter.com/pITkuT9aTp

"It's just a funny game, Bailey. I know you really like my milkshake," she says in the video titled "moving the line".

Other obscure demonstrations include a man with a spear gun attempting to coerce his female partner concerned by sharks to go for a swim at a beach, and a man eating a taco in reference to sexual assault.

While sympathetic to those trying to broach these difficult topics, Nationals Senator Matt Canavan said the milkshake video failed to strike the right tone.

"With something as sensitive as this, we're probably best just to be direct," he told ABC TV on Monday.

"I'm no expert in this field, but I think these sort of clumsy metaphors probably do make more confusion for young children than help."

"To do it like that was really clumsy. It didn't make sense," she said.

"We are better off being really direct with this stuff. It's the only way it's going to land with kids, with teenagers, with young adults."

In a statement to announce the new website on April 14, Mr Tudge said the resources were part of the Respect Matters program – developed in conjunction with Our Watch, the eSafety Commissioner, the Foundation for Young Australians and other groups.

Our Watch, a peak body dedicated to preventing violence against women and children, said it was consulted confidentially between late 2017 and 2019 when the materials were being developed and provided advice. But it was not asked to "use or endorse the materials subsequently", a statement said.

Australia's COVID vaccine program to be simplified in big 'reset' to be announced today.

Australia's COVID-19 vaccination program looks set to be simplified to two phases, as debate rages over its slow pace.

Concerns have been raised that the Pfizer and AstraZeneca vaccines are not being rolled out quick enough, with state governments keen to get cracking on a faster program.

Prime Minister Scott Morrison and state and territory leaders on Monday reached an in principle deal to bring forward the vaccination of over-50s and prepare mass vaccination sites for the rest of the population.

However, the plan – to be outlined in detail on Thursday – will rely on greater supply and distribution of vaccines.

The initial vaccination plan included five phases. Phase 1a and 1b, currently underway across the country, include aged care, disability, quarantine and health care workers, as well as aged care residents. Anyone with an underlying medical condition, significant disability, or aged over 70 – older than 55 for Indigenous Australians – are also eligible to receive a jab.

The leaders backed the strategy of using GPs to deliver vaccinations for over-50s, with states and territories to consider options to supplement the rollout through expanded state vaccination centres.

The use of hotels to quarantine overseas arrivals appears set to remain after discussion yesterday. Asked about a proposal floated to allow Australians returning from overseas to undertake home quarantine, QLD Premier Annastacia Palaszczuk said no formal proposal was put forward.

"Our hotel quarantine has worked incredibly well to date," she said.

On Monday, teary-eyed family members waited at Wellington Airport for the first arrivals from Sydney on the first day of the trans-Tasman bubble.

Maori singing filled the anxious air as they got a first glimpse of their loved ones through a specially arranged camera through to the other side of the terminal. And one by one, as friends and relatives dribbled through the arrivals door, each was met with a mighty embrace.

The scene will be repeated up and down the country on Tuesday and for weeks to come after New Zealand finally lifted quarantine requirements for Australian travellers. The first flight touched down at Auckland Airport at lunchtime on Monday – a Jetstar service from Sydney delayed by just over an hour.

Emotional scenes at airport arrivals as quarantine-free travel opens up between Australia and New Zealand 👇 pic.twitter.com/PdZ7xeKsez

Prime Minister Jacinda Ardern was across town chairing a Cabinet meeting as the first passengers came through.

"I imagine a scene from Love Actually is how it might have looked," she said. "It is truly exciting to start quarantine-free travel with Australia."

In a joint statement, Ardern and Australian Prime Minister Scott Morrison said the Pacific would come next.

"Australia and New Zealand are also exploring opportunities to extend quarantine-free travel to other countries in the Pacific, when it is safe to do so, reflecting our close ties to the Pacific and our commitment to supporting their recovery," it read.

New Zealand has committed to opening up to the Cook Islands next month, with Niue after that. It has not begun formal talks with other countries, though Fiji is keen.

Undertaking a tour of military bases around the country, Mr Dutton on Monday revealed he had blocked a decision by Chief of the Defence Force Angus Campbell to strip unit citations from special forces troops who served in Afghanistan.

More than 3,000 soldiers will no longer have their awards taken away. Instead, only those convicted of war crimes will lose their meritorious unit citations.

General Campbell initiated the move in response to the damning Brereton inquiry, which found evidence of war crimes committed in Afghanistan. The report found up to 25 soldiers were involved in the alleged murders of at least 39 Afghan civilians and prisoners, and recommended charges be pursued against 19 of them.

Mr Dutton said 99 per cent of ADF personnel had "done the right thing".

"I do want to see morale lift in the Australian Defence Force," he said.

"I've delivered a very clear message when I've visited various bases that... we want to be prepared for whatever will eventuate in the 21st century."

He said it was also important for the families of the fallen.

The federal budget will serve as 'stage two' of post-COVID-19 recovery.

Prime Minister Scott Morrison says his government's May 11 budget will serve as "stage two" of its post-coronavirus recovery plan, following on from the 2020 budget handed down in October.

In a speech to the Business Council of Australia on Monday night, Mr Morrison said the pandemic and associated government initiatives such as JobKeeper had not changed his government's desire for business-led economic growth.

He said the May 11 budget will retain a "clear focus" on low taxes, deregulation, "sensible" industrial relations policy and open trade.

The Australian economy has recouped some 85 per cent of its losses caused by COVID-19.

"[It's] a plan that very much puts business and the private sector in the driver's seat for a durable and strong economic recovery," Mr Morrison said.

Mr Morrison also used the speech to outline a $120 million "deregulation package" which he said would help businesses grow with less friction.

This included the streamlining of business reporting on greenhouse gas and energy activities, assistance to commercial fishing businesses for their data requirements and simpler business communication with the federal treasury department.

The government would also look to help businesses operate with fewer restrictions across state borders by removing the need for multiple occupational licences.

Veterans are hopeful a royal commission into suicide can shed light on the problem and lead to better services, with more than 500 veterans believed to have taken their lives in the past 20 years.

Prime Minister Scott Morrison on Monday released draft terms of reference for a royal commission, which will run alongside the work of the interim National Commissioner for Defence and Veteran Suicide Prevention. 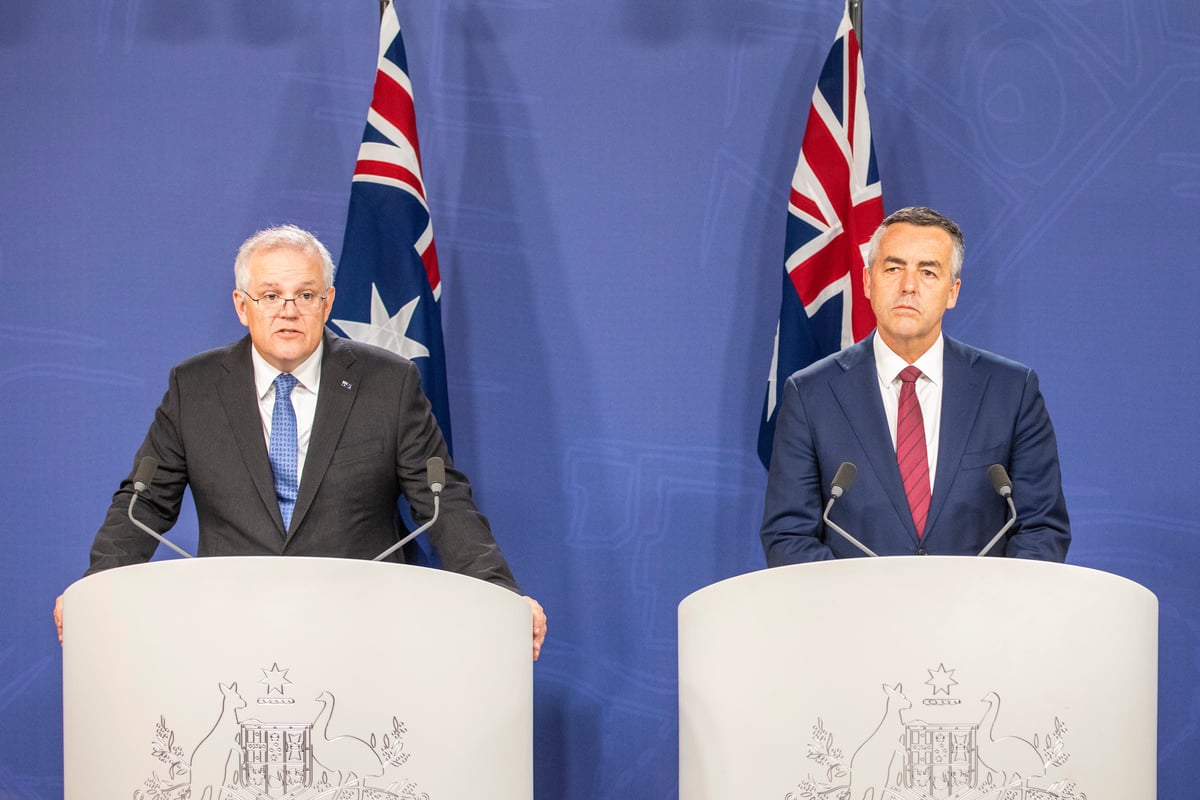 Prime Minister Scott Morrison has announced a Royal Commission into veteran suicides after months of increasing pressure from former soldiers and politicians. The inquiry will examine all aspects of service in the Australian Defence Force and the experience of those transitioning from active service. Image: Jenny Evans/Getty.

"I acknowledge my fellow veterans whose lives have been lost to suicide, those who suffer suicidal distress and PTSD and their families, friends and colleagues that have been impacted," Mr Bolton said.

"We can't help everybody today, but we can pre-empt and support all our defence force personnel of the future by giving them the training and education to serve in the ADF and then reintegrating them back into society healthy, fulfilled and backed by an incredible experience."

West Australians affected by Tropical Cyclone Seroja will receive help with their power and water bills as the massive clean-up effort continues.

Approximately 4,100 homes and businesses remain without power after the storm caused widespread damage across the state's Mid West and Wheatbelt regions.

Two Fire and Rescue St Andrews Fire Fighters are on the ground in Western Australia helping with humanitarian aid and recovery efforts.

The fire fighters are part of a task force working at Northampton 400km North of Perth. pic.twitter.com/7b7LNipFbV

More than 875 buildings have received some form of damage and 32 have been completely destroyed, including 23 homes.

The state government has announced electricity and water relief for people in the impacted area, which spans 700km long and 150km wide.

Some areas are expected to be without power for weeks after Seroja made landfall as a category three storm with winds up to 170km/h.

COVID-19 cases up across all age groups.

A leading epidemiologist at the World Health Organisation says the latest rise in COVID-19 infections worldwide reflects increases among all age groups.

"We are seeing increased rates of transmission across all age groups," Maria van Kerkhove told a WHO briefing on Monday, adding that 5.2 million cases were reported last week, the highest weekly increase since the start of the pandemic.

>5.2million #COVID19 cases reported to @WHO in the last 7 days. The most reported in a single week to date

>3million people have lost their lives to date

Enough. We have tools that can prevent infections & save lives.

"We are seeing a slight age shift in some countries, driven by social mixing," she added.

Of particular concern is the rise in cases and hospitalisations among people between ages 25 and 59, he said.

Russia's main opposition leader Alexei Navalny has been transferred to a prison hospital, the prison service and his lawyer say, 20 days into a hunger strike that has brought international warnings of consequences should he die in jail.

Allies of Navalny, who have had no access to him since last week, said they were braced for bad news about his health.

BREAKING: Alexei Navalny moved to hospital as fears grow for his life. I’ve seen this same story play out eleven years ago with Sergei Magnitsky. It’s tragic and heartbreaking. My prayers go to Alexei and his family right now. https://t.co/cJ66aqu8T4

They are planning mass countrywide demonstrations later this week, which the Russian authorities have branded illegal.

Russia's prison service said in a statement that a decision had been taken to transfer Navalny, 44, to a regional prison hospital. His condition was "satisfactory" and he was being given "vitamin therapy" with  consent, it said.

- The world's biggest vaccine producer, India, is running out of COVID-19 shots as it struggles to bring a huge surge in infections under control.

- The EU has estimated that there's more than 15,000 troops on Ukraine's border, with the risk of further escalation "evident." Tensions have been rising because of clashes between the Ukrainian army and pro-Russian separatists.

- A typhoon has left at least one person dead and another missing, and prompted the evacuation of more than 100,000 people in the Philippines.

- Former Sri Lankan cricketer Dilhara Lokuhettige has been banned from the sport for eight years due to corruption.