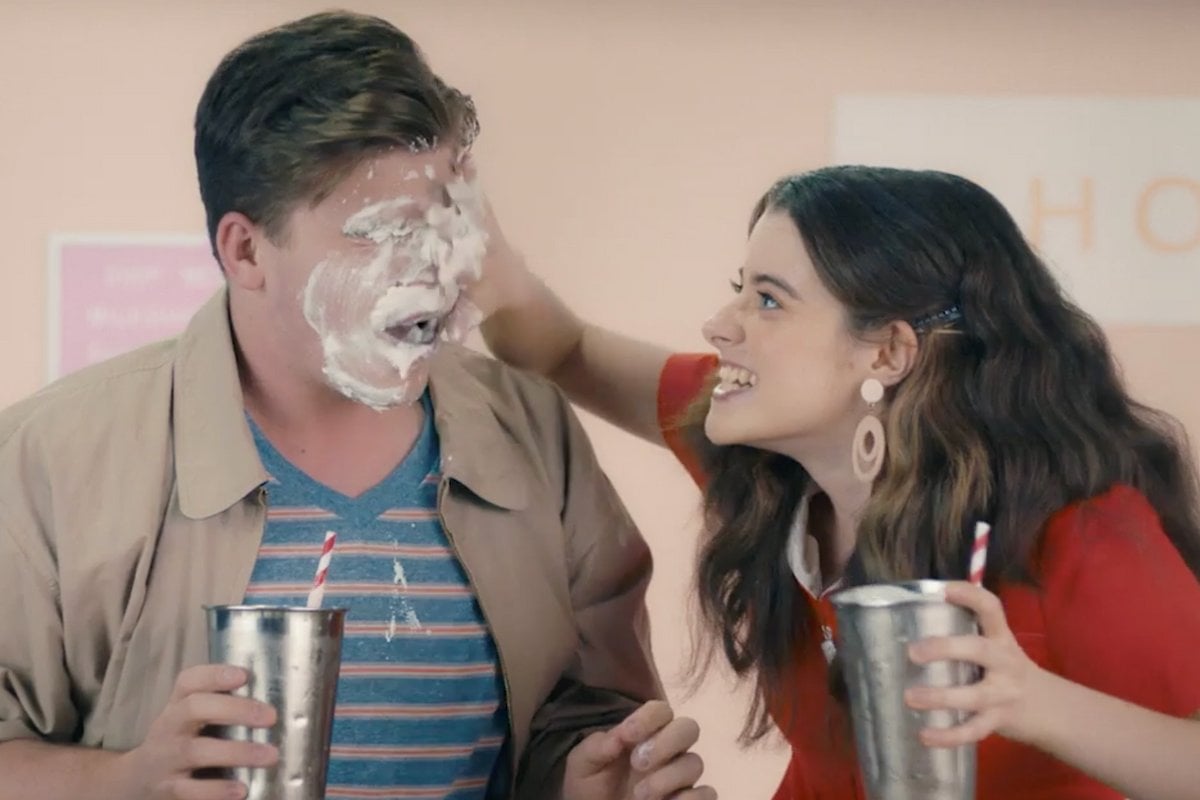 What do sharks, tacos and milkshakes have to do with sexual consent? Well, according to the Morrison government, a lot.

The government has launched a new consent campaign in which they attempt to use sharks, tacos and milkshakes to educate the youth about sex. But rape prevention advocates have labelled the videos "confusing" and argue the campaign fails to meet national standards on sexual assault education.

One video uses a taco clarify for students that an "object is an object" and a "person is a person," whilst another video sees a woman smear a man’s face with a milkshake as the voice-over explains this is "not good" because it "moves the line".

Confused? That has been the overwhelming reaction to the new videos.

Side note... These are the hidden numbers of women and violence in Australia. Post continues below.

The Morrison Government funded The Good Society to produce the videos, which are now available on their website.

The campaign has received a slew of criticism from the public at large as well as rape prevention advocates. Here's what you need to know.

What are the videos designed to do?

The Good Society is part of the Australian Government's 'Respect Matters' program which aims to promote respectful relationships education in all Australian schools. To do this, they provide tools for teachers, students and parents with the ultimate goal to teach children and teenagers about consent.

In these newly released videos, teenagers act out various skits as a narrator explains the connection to consent.

For example, one video sees a male eat a taco as the narrator helpfully explains the "taco has no opinion about whether or not you eat it... because a taco is an object".

"A person is a person," the narrator adds.

The overall message of this particular video is to "Stop, Ask, Listen". You can watch the taco video here.

There is also a video where a female spreads a milkshake on a male's face, and another one about going into the water with sharks.

This is the government's new video to educate teenagers on consent... and honestly, I think I actually know less about the issue after watching this. What's going on?

What have people said about the new campaign?

Fair Agenda and End Rape on Campus Australia have both condemned the government’s newly released school resources, labelling the videos as "concerning and confusing".

The groups say these videos are not explicit enough in their messaging and are too confusing to create any meaningful change in terms of understandings of consent.

"These resources fall well short of the national standards, and what experts know is needed to actually change behaviours and prevent abuse. If we want to address sexual violence with students we need to arm them with tools to make ethical decisions in emotional and complicated interpersonal relationships. Not these basic and oftentimes confusing resources," Karen Willis, a prevention educator with 30 years experience, said in a statement on Monday.

"More than a decade of research suggests that this content will not work at changing behaviour and preventing violence. Young people are more sophisticated than this content gives them credit for. And sex and consent is far more complicated than videos about milkshakes and sharks at the beach," she added.

The prevention experts call out specific problematic phrases adopted by this campaign, including their statement: "sexual desire... can really distort our thinking".

Sharna Bremner, Founder of End Rape on Campus, also criticised the video, suggesting it demonstrates a profound lack of awareness of the lived experiences of the intended viewers.

"We know that in classrooms of senior students, there will be many who have already experienced rape. This resource fails to properly consider there may be a survivor in the classroom, and even includes inaccurate and inadequate information on avenues for support and reporting," she said.

I don’t understand [email protected] ad. He tries her milkshake but he prefers his own. So she smears hers all over his face. How does that equate with rape??? Am I missing something?

Oh my giddy godfathers! This may be the single worst piece of communication I have ever seen! It’s worse than the movie ‘Reefer Madness’ my friends and I used to cackle at in the 70s. https://t.co/MKBazd745T

The thing about that consent video for highschoolers is that there was never any need for it to be wacky. As a teenager I would have killed for a plain-speaking adult to talk about this stuff with us in an honest, open and informative way. That's literally all it needed to be.

The Twitter response to something can make it seem worse than it is when you finally see it.

But in the Milkshake Consent video’s case, nothing you lot said prepared me for how bad it actually is.

Praying for the young actors in that milkshake thing.

I spent three days digging through the government's website. I watched every video. I read all of the accompanying materials.

I cannot work out what the milkshakes, tacos or sharks are supposed to represent. And I run an org called "End Rape on Campus Australia". https://t.co/sshajJPAkk

The video comes after sexual assault allegations have dominated the national conversation for the past few months, triggered by the accusation made by former Liberal Staffer Brittany Higgins who says she was raped when she was working for a Liberal Party MP in 2019.

Reply
Upvote
3 upvotes
This whole video, campaign or advertisement, whatever you want to call it cost $3,500,000.00 to make and it has been cancelled immediately. This government WASTES so much money, they are appalling money manages. A bunch idiots.