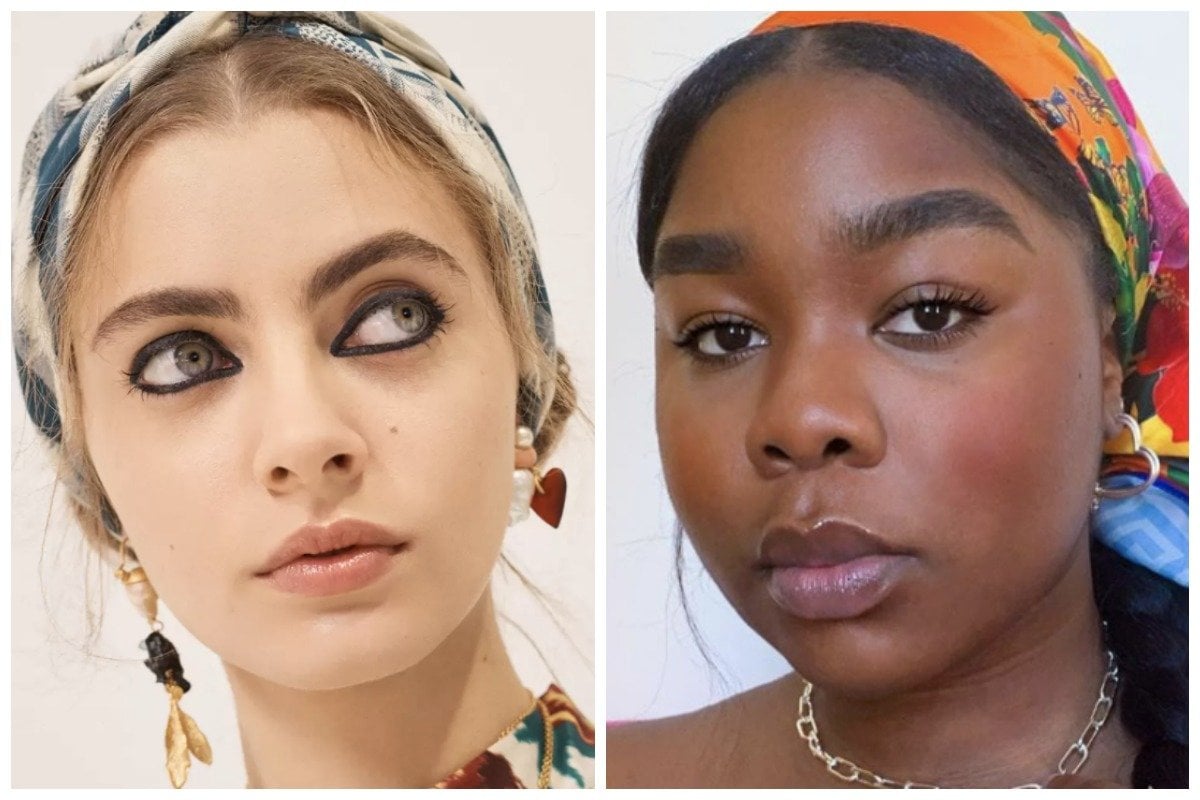 COVID-19 has changed a lot of things. (Contender for the understatement of the year?)

Run your finger a fair way down that list of things and eventually you’ll hit what I want to talk about today: makeup.

If you need a refresher of what that is, well, I won’t blame you. Like many, mine has been gathering dust alongside my high heels and passport. Oh, and bra.

But as things (slowly) open up and get more social, more and more of us are slowly creeping back towards our makeup collection - with one major difference. Masks.

How to do a smokey eye. Post continues below.

Is this the end of 'The Lipstick Effect'?

You’ve probably heard of the lipstick effect. It refers to the sales of small luxuries (like lipstick) in times of economic downturn.

While spending on big ticket items drop, history has shown that consumers still tend to buy these smaller, more affordable items during difficult times as a 'treat' to forget about their financial problems.

In fact, some say that an increase in sales of small luxuries like lipsticks can actually indicate an oncoming recession or period of diminished consumer confidence.

Reportedly coined by Estée Lauder chairman Leonard Lauder in 2001, market research firm Kline found some evidence for 'the lipstick effect' through four recessions from 1973 to 2001.

Lipstick has always been a powerful tool.

During the Second World War, lipstick wasn't just an adornment but actually considered part of a woman's patriotic duty.

'War paint' in every sense of the word, according to Bustle a swipe of red lipstick was considered a morale booster for both the women at home and men on the front - as well as a pointed statement to Hitler who hated women wearing makeup.

The relationship and influence of war on makeup is actually fascinating - for example, there’s a very particular reason we call it a lipstick bullet. I highly recommend reading this comprehensive piece from Bustle that deep dives into the subject.

Given the significant impact of COVID-19, there's absolutely no doubt there are trying economic times ahead. The pattern set by the lipstick effect is likely set to continue - but with mandatory mask wearing in many places, it won't be lippie we'll be treating ourselves to.

Anyone who's worn a mask for more than five minutes will know that lipstick just ain't practical.

Taking your mask on and off for eating or drinking or even just having your mouth completely covered any time you leave your house (that’s us, Victoria) means attention has shifted to above the nose. Now, it’s all about the eyes.

Bold eyeshadows, colourful eye liners, intricate blending, perfectly groomed brows… or just a swipe of something, anything, to distract from your unwashed hair. Ahem.

After months of wearing nothing - and despite my larger-than-normal collection of lipsticks I’ve always counted on as a finishing touch for an outfit - I’m actually looking forward to getting creative with makeup again.

One thing I plan to do differently in ISO 2.0 is to have fun with makeup. The first time, I gave it up almost completely. Now, still with no pressure of numbers or goals or results, I hope I can treat it as more of a creative activity, like painting or the 1000 piece jigsaw I still can’t bloody finish. So here’s the first: my fave @retrosweat neon sweatshirt and matching hot pink winged liner (done with eyeshadow and a wet eyeliner brush.) #BeautyIsolation💄🌸🌺

Pink graphic liner for a Monday morning meeting? Why not! Sapphire glitter for my weekly grocery shop? Of course! A carefully blended sunset eye to take the bins out? Obviously!!

It's the perfect opportunity to go bold with colour, graphic design and glitter to add some depth and excitement to your makeup look. (Goodness knows there’s little going on elsewhere!)

My Morphe x James Charles palette ($59) is full of vibrant colours so prime for experimentation, while the Mecca Max Single Shadows ($8) come in a range of wearable and brighter shades. You don’t even need a brush - one swipe on your lid with your fingers and you’re pretty much ready to go.

If you’re sick of buying an eyeshadow palette only to use just two of the 12 shades, then it might be time to look to single shadows. I’ve been loving the ones from @meccamax - although at just $8 a pop, it’s going to be hard to resist collecting them all! This is ‘Radical’ a bright orange-apricot and I love how it contrasts against blue eyes. They’re pigmented enough to just swipe on with your finger for a burst of colour but they also blend beautifully too. If you’re not into brights, don’t worry - there are plenty of neutrals too. Next on my hit list is the blue and lilac shades sported by @flex.mami and @aliwhittle_ in the launch campaign. Love! (PRESS SAMPLE)

For ~special~ occasions or bin day, I always reach for my Stila Glitter & Glow Liquid Eye Shadows ($38). The wet formula and doe applicator means you’re not risking spilling loose glitter all over your bathroom floor every time you crack it open.

Creatives like Flex Mami and Rowi Singh have me itching to create some more graphic looks with really pigmented, colourful eyeliners. I’m yet to find one that truly blows me out the water, but Sephora Collection, Urban Decay, Rimmel and NYX are always safe bets.

And what about foundation?

The reality is that the dance of mask on and mask off is going to eventually rub off any face product you apply. If you have to wear it all day (e.g for work), you could probably get away with just applying to the top half of your face. (Bright side - your product will last twice as long too!)

Off the back of a decent skincare regimen and reluctant to jump straight back into heavy makeup, I've actually been experimenting with skipping a base product altogether. Instead, I opt for glowy SPF (always) and a touch of concealer where needed.

I’ve got blisters on my feet after getting too enthusiastic with a new pair of trainers/runners - my own fault - so didn’t get out and about for much sun today, BUT you can bet your bottom dollar (and your top one too) that I still put this sun blocking potion on my skin anyway. ☀️Sunscreen is not just for summer. Or being outside. Wherever there is UV, your skin needs protection. (Plus, you’d be surprised at how high UV levels can still be in winter!) My WFH desk is next to a window, so I want to make sure I’m not damaging or ageing one half of my face. This is the second product I’ve tried from @ultravioletteau and it’s vying for my favourite. A revolutionary light, almost serum-like consistency, this ‘skinscreen’ absorbs quickly into the skin and doesn’t leave a white cast. It has a rose scent which took a little getting used to (I was used to their Supreme Screen which doesn’t have it) but it’s delicate and pleasant. Works well on its own for a little bit of glow on the skin, but plays nice under makeup too. Available online and at @sephoraaus and @adorebeauty , $47 but worth it. I also interviewed Co-Founder @avamatthews last year for @beautyislandpodcast if you fancy hearing about how the brand came to be, plus her fascinating career journey and what it was like growing up with a Fashion Editor Mum. (Hint: it involved waking up to celebrities and photoshoots in her garden more than once.) Link in bio and scroll to her ep. #PURCHASED EDIT: Also @calltimeonmelanoma has a discount code for 20% off! CTOM20 direct from Ultraviolette, conditions apply.

This is me last week doing exactly that for a sunny afternoon picnic.

Last week, experimenting with skipping all base products bar a glowy SPF and a touch of concealer where needed. Not hating it?? (Although admittedly this was a pretty good skin day.) No lipstick coz masks, and my brightest dress and earrings because a) #dopaminedressing and b) I’m kinda sick of activewear. After completely bypassing my ‘real’ winter wardrobe, here’s hoping my optimistic purchasing of colourful summer dressing will be rewarded with some actual outings. P.S new issue of It’s A Beauty! went out this morning - check your inbox or read via link in bio. #NoFilterNaturalLight

When my skin is hydrated and behaving, I love using cream formulas. The Fenty Beauty Cream Blush is a new favourite as it’s easy to work into the skin for a natural finish. Then to finish up top I’ve got my absolute favourite mascara, L'Oreal Paradise Mascara, and the aforementioned Mecca Max Single Shadow in a poppy apricot shade.

Then a bright dress and earrings because #dopaminedressing.

Obviously not everyone wants or likes skipping their base. And I know that there’ll definitely be days when I want a slightly fuller coverage. A tinted moisturiser is a great middle ground but it does transfer onto my mask.

Realistically, there’s no one single product that’s going to completely withstand the unique conditions and challenges your mask creates on your face.

A long-lasting, hydrating and matte foundation is your best bet with plenty of options both budget and a little more exxy. And make friends with a setting spray.

I used to think setting sprays were another beauty scam but they truly are the equivalent of hairspray for your face. (Some people actually do use hairspray - but for the sake of your skin I would not recommend.) Save it for your hair and try the cult Urban Decay All Nighter Setting Spray ($53) or the highly rated Skindinavia Makeup Finishing Spray ($48).

I’m fascinated by the way the pandemic and lockdown has changed our makeup habits and relationship to beauty (in fact, I even did a podcast series on it called Beauty Isolation!). So I’d love to hear from you - are you back wearing makeup? What products have you found are mask-proof?

Brittany Stewart is a beauty journalist and creator of the award-nominated podcast, Beauty Island. A version of this article was originally published in her weekly beauty newsletter,  It’s A Beauty! Read more here and follow her at  @brittanybeautybts

Reply
Upvote
I haven't worn makeup in 20 years, but after watching so many influencers on YouTube, I got into makeup.  Eyes primarily and a Buxom lip balm.
<deleted> 5 months ago