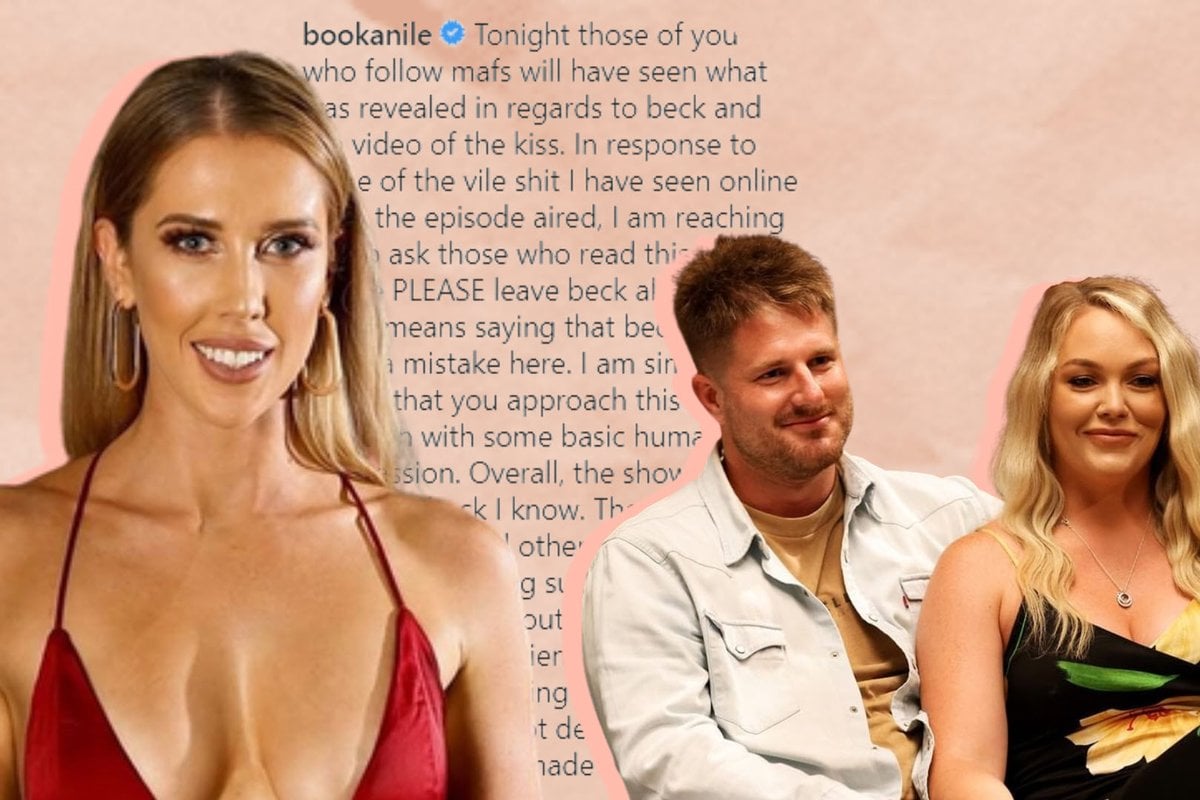 So, what's everyone up to tonight?

The trash fire that was MAFS 2021 is finally over, and we suddenly have time to live our lives again. I kind of... don't know what to do with myself.

But before you make plans, there are a few more things we need to discuss. Namely, all the totally wild drama to come out since Sunday night's finale episode.

In true Married At First Sight fashion, the cast have gone rogue on Instagram, salacious rumours are swirling and gossip sites are dropping some major bombs.

We know you want to hear it, so keep on reading. You can always make plans for tomorrow night.

Following the MAFS final episode, Booka shared a lengthy post on Instagram asking people to leave Beck alone, after she was flooded with negative messages about the video of the kiss.

"I am by no means saying that Beck didn't make a mistake here. I am simply asking that you approach this situation with some basic human compassion," Booka wrote.

She said the show did not show "the Beck I know" and that while she did not condone her actions, Beck was a human being like the rest of us.

"Complex, flawed, jaded and sentient like all of us. Beck has had to endure a level of cyber bullying and cruelty from the public that I cannot even comprehend," she wrote.

"Too many MAFS participants over the years have had to endure the same vile and often violent online abuse that I’m seeing Beck receive. The lasting impact this cruelty can have on them is utterly f***ed. If you're trying to make a point about morality and core values by posting cruel shit, take a moment to reflect on where your own morals and core values lie."

Booka said no matter how much you think you know someone from seeing them on TV, you don't actually know them.

"At the end of the day you don't know them... Especially not well enough to justify abusing them, degrading them, and actively subjecting them to horrific online commentary and abuse. I know Beck. I know her better than anyone who's based their opinion of her purely off this show. She deserves better than this."

Before MAFS, Jake was engaged to a woman named Paige, who he allegedly cheated on six weeks before their wedding. Big yikes.

Now, Paige has shared a group of messages she has received from other woman who say Jake cheated on her with them.

Oof. Paige also commented on the above post to say there's even more, so... watch this space.

Remember Mel from season six? And her... uh... 'sex drought'? Well, the drought is over, and it's due to Jake.

In February, shortly after the reunion was filmed, Mel and Jake met at a party and spent the night at a hotel together, she confirmed to The Wash, though she didn't want to talk about Jake. Fair enough.

"I guess I thought I would play it cool at least. And I was anything but cool guys, as I’m sure you can all imagine," she said.

Megan Pustetto over at So Dramatic! has Bryce sources coming out of her ears, including a number of his former colleagues who jumped on her podcast to share what he's really like.

Spoiler: They claim he's exactly how we all imagine.

"When I spoke to Bryce prior to the show starting, he was gloating about being the centre and cause of some of the biggest fights on the show," a former colleague from Hit104.7 in Canberra told Pustetto.

"His head was already big before the show had even aired. He openly told people that he was going on Married At First Sight, even though he was still with a girl at the time and he was proud of it. It was so bizarre.

"There was a lot of juice flowing around Canberra before filming even started."

Another source claimed Bryce would complain about his former ~secret girlfriend~ Courtney in front of everyone at work, including by attacking her appearance.

"Bryce would regularly make comments to our office about Courtney’s appearance, back in the early days when they first started going out," they said.

And a third source said Bryce wasn't super fun to work with, with at least one person moving jobs to get away from him.

"Nobody who's worked with him seems to actually like him," the source said. Oh.

Bryce and Melissa are both just... ignoring all of this drama, posting on Insta about their love and using... baby emojis.

Actually, Bryce and Melissa might get their own reality show.

That's according to ol' mate Bryce himself, who told Woman's Day they're "in talks" for their own show.

"It'd be amazing to showcase why we love each other so much and who we are as people outside of the show because we're just two normal people, and maybe we weren't supposed to be together but we've overcome all the odds," Melissa said.

She also reckons she's the happiest she'd ever been.

"I'm in a loving, safe and committed relationship with Bryce, and I'm in love. And besides, I'm a grown woman – I would have walked away long ago if I didn't feel safe," she said.

She also said she never imagined having kids, but it was now something she looked forward to with Bryce (who also said they'd be lying if they said they weren't trying).

Over on Insta, Coco said she woke up on Monday morning with a bunch of messages saying she did not take accountability for her actions.

"However, we're here and that's okay, you know? We live and we learn... I regret it but you live and you learn."

Random, but important, because WHAT THE HELL ARE THEY THE SAME PERSON? 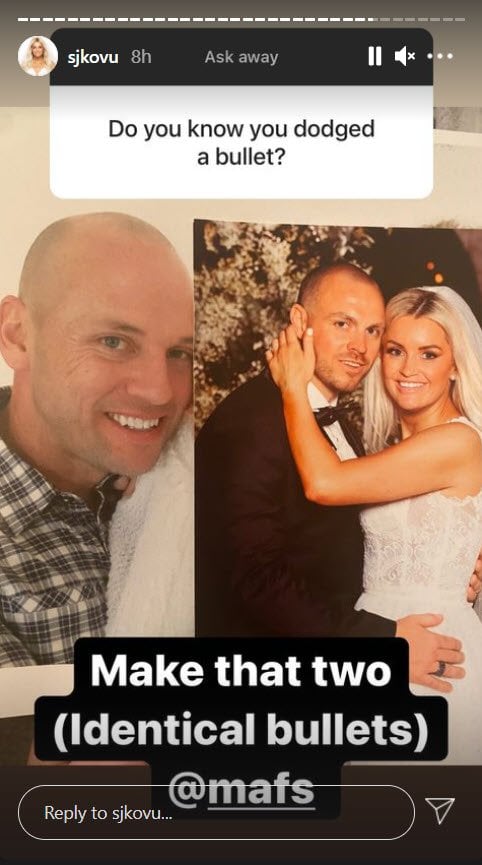 Georgia and Liam have made up.

No, they're not back together, but Georgia and Liam have both shared messages of appreciation and support to each other on Insta, making it clear they've put their differences aside.

"I hope out of tonight we can move forward on better terms. No matter what you will always be a part of me. Thank you for sharing this journey with me, an experience of a lifetime," Georgia wrote.

"We shared a lot of happy memories together and I’ll always cherish those memories we had but unfortunately the last dinner party is where we came unstuck and we were not able to get back on track," Liam wrote, adding he took responsibility for this.

"I will always love you G. You will always have a place in my heart. There is a bond between us that will always be there because of this experiment. You came into my life for a reason and I believe you are my soul mate. Soulmates are just that, they are mates of your soul. On our wedding day to me it felt like I had known you for years and now I understand why. I believe soulmates come together to help awaken each other and remind each other of who they really are and for that, I thank you.

"I really wish things had worked out differently for us G. I wish we didn't let people get inside our heads and I wish we were better at communicating. I wish you all the best with your life journey and I hope you find the guy you are looking for. I am sorry that wasn't me."

Well, we'd say 'until next year', but you know the drama surrounding this cast isn't going away anytime soon.

So, we'll see you whenever someone next starts a rant on their Insta story.