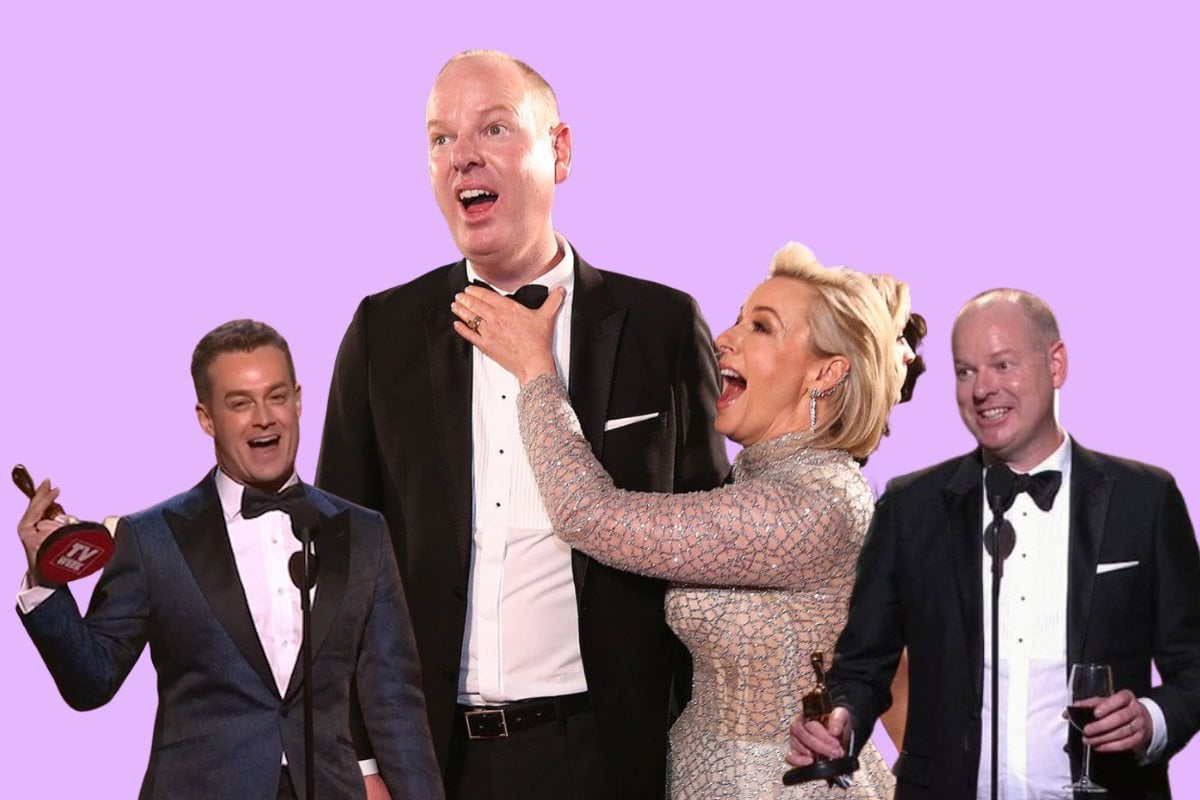 Earlier this week, the nominations for the TV WEEK Logie Awards were announced.

"Eh, who cares," thought half of Australia.

"OMG, THEY'RE BACK!" thought the other half.

If you belong to the first half, you should probably stop reading now. Please feel free to wander around our site - we have a lot of interesting and thought-provoking content without the word "Logies" in them.

If you belong to the second half, then you're probably due for a refresher since it has been FOREVER (two years) since the Logies.

Take my hand and let's walk the red carpet of memories together.

What happened at the last Logie Awards?

It was a much simpler time. Donald Trump was still in power. Songs like Dancing with a Stranger, I Don't Care, and Sucker ruled the airwaves. Everybody sat next to each other on the train without giving a bit of side-eye. No one in Australia wore masks - except of course for the metaphorical ones we wear every day.

And the Logie Awards - TV's night of nights - was in full swing on the Gold Coast.

As always, all eyes were on who would win the coveted Gold Logie, an award for the most popular personality on Australian television.

Comedian and Hard Quiz presenter Gleeson, who ended up winning the Gold Logie, had campaigned hard (pun intended) for the award.

"The idea of winning the Gold Logie is so preposterous that I have to have it," Gleeson told Stellar magazine during his #Gleeson4Gold campaign. "It is so stupid, and it makes me laugh so much, that it makes me want it."

Unsurprisingly, not everyone was a fan of the comedian's approach.

"Tom's like the school bully picking us all off. I'm not very good at it," fellow nominee Keller told Mamamia's No Filter podcast.

"People have always laughed at the Logies. But at the same time, they are all we have for television awards. If the public vote for you, that's a big deal and I wish people would let it be a big deal."

Listen to The Gold Logie Goes To... The Biggest Bully. Article continues below.

"I’m really grateful that I’ve been offered this opportunity to be nominated for this," Keller told Stellar magazine.

"I was just talking to my dad about how my mum had to leave school at 16. She got a job in the bank where she met my dad, and she had to leave work. And here I am — 57 and I’ve never been busier. And to be nominated for this award — I was going to say 'later in life', but I hope there is more to come — but this far into my career is a wonderful thing for me.

"When I grew up, I didn’t know women who worked. We didn’t have role models, we didn’t have people who I saw who had these long careers that weren’t teachers. Mum died 13 years ago, and she loved the work I did, but I often think she’d be stunned that I’m still doing it."

Both Keller and Aly were the frontrunners for the Gold that year. So when Gleeson pipped them to the post, there was a rush of disappointment from their fans, and from those who did not appreciate the Logies being made a mockery of.

That’s it. The Logies have lost ALL credibility. I will never trust a poll in a magazine ever again.

What a joke! I think the Logies are done for good #TVWeekLogies

This was most likely exacerbated by one of the most blistering acceptance speeches ever delivered.

"There’s been a lot of concern that I’m turning this award into a joke... Turns out I'm just really good at manipulating the media into doing things for me. Which, if you think about it, is why we're all here," Gleeson said in his eight-minute speech.

Eight minutes! He later admitted he was drinking heavily and that his wife Ellie Parker, who was sitting in the audience, told him he should have ended his speech much earlier.

"This award has done a lot of great things for a lot of different people. In the past it has represented trying to get more diversity on the screen or launching charities and that’s fantastic. But for me it represents a joke, but I love jokes. I really enjoy them. I really think we should all lighten the f**k up," Gleeson's speech continued.

Can Tom Gleeson win an Oscar next? Because I would love to see this level of sarcasm and trolling on the world stage. #Logies2019

Somewhat ironically, that was the best Logies in years. Between Kerry O’brien and Tom Gleeson, the Logies just got a whole new lease on life. The “lighten the f^*k up” Logies will be long remembered. #Logies2019

"The aim of my campaign was just to have fun with the whole thing. Because it all doesn’t really matter. It really doesn’t matter. We can have fun and just be entertaining. People get concerned about people campaigning for the award," Gleeson went on in his speech. Did I mention it was eight minutes long?

"Just because all of you want it and I’ve got it, don’t get angry with me. It’s all right, you’ll all survive. It’s a shame this is the last Gold Logie that’s ever going to be handed out - according to Grant Denyer, I’ve ruined the Logies. But at least I won this all by myself."

Wait a minute, what's Grant Denyer got to do with it?

It was a much simpler time. Donald Trump was still in power. Ed Sheeran's Perfect was on repeat. No one had any idea that in less than two years there would be a pandemic that would change the world forever - except for The Simpsons and Bill Gates. And maybe Nostradamus.

Long-time presenters Grimshaw and Keller were thought to be the most deserving, especially as the #MeToo movement was at its zenith.

Yet it was Denyer who took out the top gong. Controversially, his show Family Feud had been axed, and so there was surprise that he was nominated in the first place. Gleeson decided it was ridiculous enough to turn into a joke - by campaigning for Denyer to win.

"Let’s push the Logies to its most absurd extreme ever and give the Gold Logie to a guy that doesn’t have a TV show," the comedian said.

Big day for the #Denyer4Gold movement. Let’s go back to the #HardChat that started it all. Vote here: https://t.co/oIgKOm3nip https://t.co/YyjaVNigaL

Never under-estimate the power of #ABC 's Tom Gleeson @nonstoptom the genius behind #Denyer4Gold campaign resulting in Denyer's hilarious #GoldLogie win
In one stroke of comedic genius Gleeson has forever consigned the #Logies into a dustbin of irrelevant, self-promotional hubris https://t.co/PgPpL0Pj0g

ADVERTISEMENT
Video via The Project.

Upon winning the Gold Logie, Denyer delivered a heartfelt and stirring speech alluding to his past hardships.

"I really wasn't sure if I'd ever work again or if I wanted to. I wasn't particularly in a very good place. I wasn't very well. I was in a bit of a hole. I was pretty sad. I was a bit lost and Family Feud came along and I was very unwell at that particular time," he said on the night.

"And Family Feud gave me a ladder out of that hole. And I've been very lucky to have had it. It gave me my mojo back, it gave me my confidence, it gave me some courage, and I rebuilt myself. It gave me a new attitude. And I figured out it's never too late to improve yourself, to be kind to other people, and to know that you can always be a better you and that you can have a much better, positive influence on other people."

Thank you so much to everyone who voted #Denyer4Gold. You made a bald middle aged man very happy. #HardChat #TheWeekly pic.twitter.com/K9TTivtKCy

Denyer was not amused, telling Gleeson on The Weekly with Charlie Pickering that he "hijacked my campaign and now everyone thinks I won a Gold Logie because you hijacked it. That’s not a question. It just sh*ts me."

Even Russell Crowe entered the fray, tweeting his support for Grimshaw and Keller.

I’m sorry but I dont agree with this . I know its a gag with good intentions on behalf of @grantdenyer but... if it’s Tracey Grimshaw’s year, or Amanda’s... wouldn’t it be shit that a career defining landmark for them gets derailed by a “boys club” gag ... just saying ... https://t.co/d5owU1TwhP

So is everyone STILL peeved at Tom Gleeson?

Well, mostly no. I think. Time heals all wounds, right?

Earlier this year, Gleeson appeared on Keller's WSFM's Jonesy & Amanda radio show where they clarified there was no hard feelings between them.

"Now Tom, a lot of people think that I still have beef with you about the Logies and I'd like to clear the air. I absolutely do not," Keller said on the show.

"You and I caught up and clinked a glass not so long ago. In fact, I have such little beef, I have vegan loaf when it comes to you."

This tweet likely best sums up what many people thought of the 2019 Logies:

No issues with Tom Gleeson, he played the modern media game including social media & hitting the funny bone.

HOWEVER, Amanda Keller has been on the TV for as long as I can remember & is bloody darn good at it, so it's just a shame she didn't get the votes, That's all.#Logies

Which brings us back to the 2022 Logie Award nominations.

Unfortunately, Keller missed out on a nomination this year. She opened up about the snub this week on her radio program.

"So the last two Logies, I was up for the Gold. And it’s hard yakka having to spruik yourself," she said. "It’s such an accolade, I was so proud to be nominated. I took it very seriously. It’s an important part of Australian television history, to be nominated meant the world to me.

"Tom had a comedy routine about it, the trope was, 'this is meaningless, but I’m going to rort the system', and he kind of sledged it along the way. So normally, nominees just run their own race but I wasn’t capable of running my own race because that narrative was picked up by the press, and it became 'Tom versus me'.

"I didn’t have to win - the year before, Grant Denyer won, and I was thrilled, because I follow this Gloria Steinem quote, the idea that you’re 'linked', not ranked. Just to be there, and linked with the other nominees, what an accolade. But [at the 2019 Logies], it felt like we were ranked and it was hard."

Personally I'm hoping for Keller to be nominated in 2023 and win and have her well-deserved moment on that stage.

As for Gleeson, everyone (aka half of Australia) are wondering if he will take out the top gong again this year and whether we'll have to sit through another eight minutes of his acceptance speech. He's already the longest Gold Logie holder since the Awards have been on hold for two years.

Whatever happens, there is sure to be some drama. Get your popcorn ready.