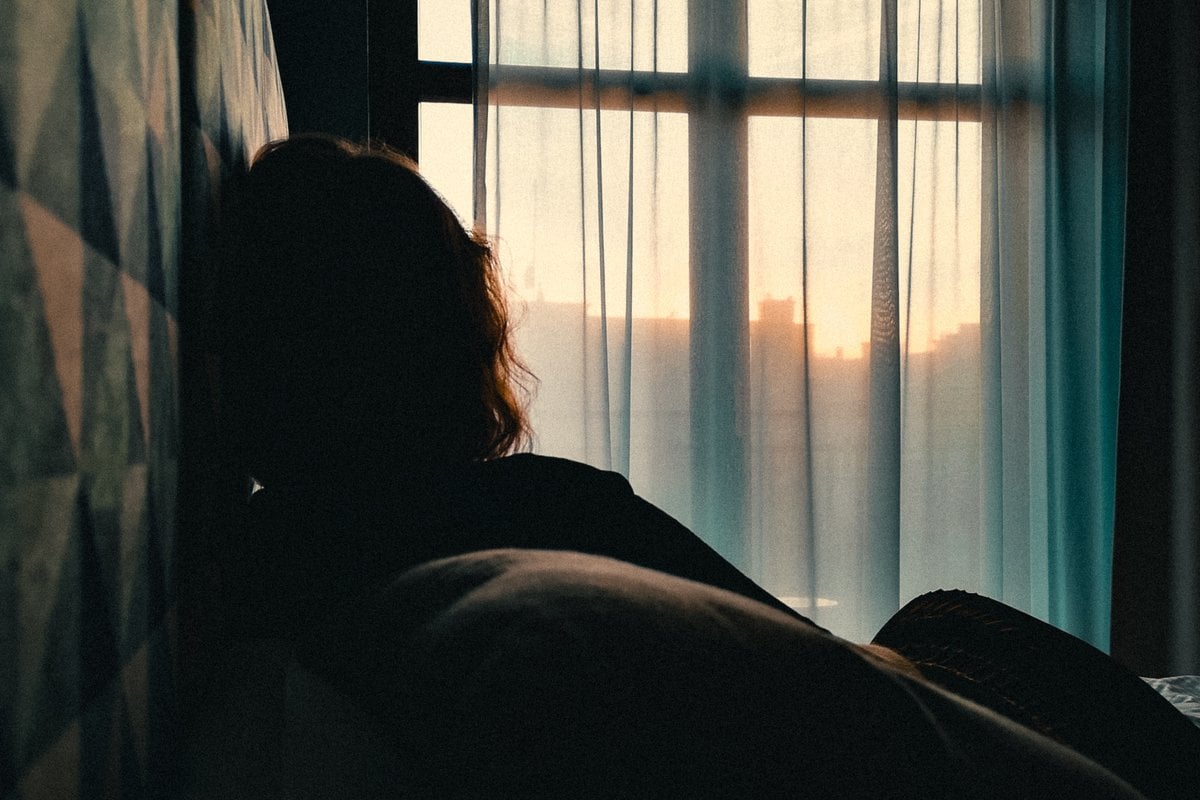 This post deals with domestic violence and mental health and might be triggering for some readers. Some details have been changed in the story for privacy reasons.

In the middle of the night in February 2020, Rachel* woke up her three children and put them in the car.

She had just been involved in a domestic violence incident after her emotionally abusive relationship came to a head.

"Daddy hit Mummy and we have to leave," she explained to her kids.

She left without grabbing most of her belongings and drove to her parents' house. She hasn't been back home since.

Earlier that night, Rachel had called the police after the violent incident with her ex-husband.

"[The police] arrested him and told me they were going to hold him overnight," Rachel told Mamamia.

After leaving the police station, her ex-husband, who she had recently separated from, ended up returning to the house where Rachel and her kids were staying.

Rachel was given a direct number to call the police. But when she called, they explained he was allowed to return home as he lived in the residence too.

It wasn't until two days later when she was filling out paperwork that she was told this should never have happened.

That night wasn't the first time Rachel had thought about leaving. But her children and hopes that the relationship would improve stopped her from walking away earlier.

"People have said to me, 'Why didn't you go earlier?' The relationship that we were in, you think it will get better or we will try this and try that. We also had a good social life with our friends and family and I knew that would change."

Rachel said that people in her social circles would have had no idea just how abusive the relationship was.

After leaving her home, Rachel and her children spent the next year and a half living with her parents.

During that time, she and her children were "struggling with high conflict separation, psychologists and court proceedings".

"It had been very stressful for everybody."

Then came a fresh start.

"We finally got our place which everyone was very excited about... And then we went into lockdown."

Rachel had only been in her new house for two weeks before Sydney's stay-at-home orders were announced.

Making matters more difficult was the fact that she was now living in one Sydney's LGAs of concern and - having moved to a new suburb - didn't know anyone in her five kilometre radius.

"We haven't been able to have any family or friend over [since moving]," she explained.

"I can’t exercise with anyone as I know no one in our new area."

The single bubble restrictions also don't help, as the only person Rachel knows is a friend who lives 6.5 kilometres away and isn't allowed over.

It's a rule that's hard to swallow considering people in Sydney in intimate relationships can visit each other's houses outside of their five kilometre radius.

"For people like me, just because we're not in a relationship and we don't have anyone in our five kilometres, we can't see anyone. That's were I feel forgotten."

"I just feel like [NSW Premier] Gladys [Berejiklian] is trying to please too many people. And then there's still people that are missing out."

Rachel is also worried about the mental health of herself and her children after "not seeing anyone for [what could be] six months".

Her family are also still navigating the stress that comes with separation, a custody battle and the loss of Rachel's 20-year-old business due to COVID-19.

"[I'm] homeschooling the kids daily, not working as I’ve been unemployed since March 2020 as COVID has crippled my business... and dealing with us emotionally from the DV trauma we experienced. My kids are going backwards emotionally. Myself also."

But while her children have been able to leave the house to see their father, she's concerned they haven't been able to get the mental health support they need without access to their usual therapy sessions.

"Every day, it's one of us that struggles more than the others. And it's hard. It's hard on all levels. The other day, I had to call a pupil free day because it was just too much doing school."

But the news that broke her came two weeks ago.

On Thursday, August 26, NSW Premier Gladys Berejiklian announced that rules would be relaxed around outdoor gatherings within a five kilometre radius for people who are fully vaccinated from mid-September - but with no one in her proximity, it's a privilege she'll be unable to enjoy.

The following day, it was announced that students in NSW will begin returning to school from late October.

But once again, that was unlikely to apply to her.

"I heard those two announcements on Thursday and Friday and that was probably my breaking point."

"We heard that school is going to go back from late October... but they probably won't go back for a while because I'm in an area of concern and the case numbers need to drop considerably."

With schools not going back for a while, Rachel's ex-partner continues to come to her house to pick up their kids rather than swapping over at school like they usually would.

"When he comes here, we talk, and it's very uncomfortable and the kids pick up on it," she told Mamamia, adding that her and her ex-husband have a "high-conflict relationship".

For women in similar situations, Rachel says more support is needed to navigate these extremely difficult and stressful situations.

"There was a little bit of support at the start because it was a domestic violence incident so you go through programmes, but now there's not so much."

Rachel says there also needs to be more education and understanding about the entire process, including what happens after separation.

"I would like to see more education delivered before it gets to this point."

"It's kind of like when you have a baby, everyone's excited you're pregnant... and then no one actually tells you what it's like the day of labour and the next day and the next day. This is kind of the same. We might have an understanding like things aren't going to be great, you're going to end up in court, there's the financial custody battle, but knowing the things that I know now, I would have done things a lot differently."

The advice she would go back and give to herself?

"Speak to the police more at different stations and different personnel to educate yourself on what the law is, what your rights are, and how they should be protecting you."

Once lockdown lifts, Rachel says she's looking forward to returning to her normal routine for her kids and getting them the full support they need.

"Getting them back into their extra-circular activities and therapy... Just getting back to the day to day."

That said, being in their new place - albeit in lockdown - has already helped both herself and her children start to heal.

"We feel better because we're in our own place now. We feel safe. My head feels like there's still a lot going on but I feel clearer, knowing that I don't have that baggage daily."

"It's still very hard. But I feel better mentally, being away from that toxic environment... I feel like I'm in the process of healing myself and getting through it."