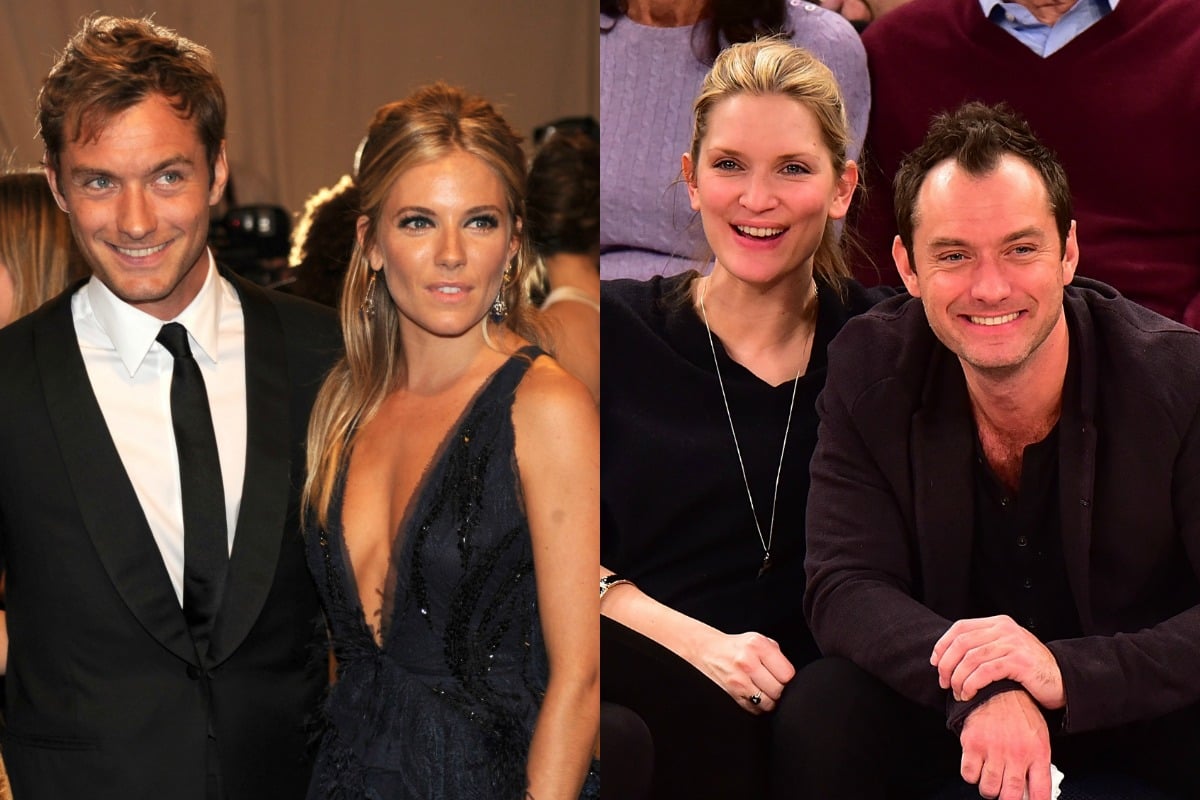 In 2019, Jude Law and his partner Phillipa Coan tied the knot after four years of dating.

Law, 47, and Coan, a business psychologist 15 years his junior, reportedly met through mutual friends in early 2015. They surprised fans with a low-key ceremony at Old Marylebone Town Hall in London in May 2019 and celebrated with a reception with close family and friends.

It’s a turnaround for the star of The Holiday (a.k.a everyone’s second favourite Christmas movie), who was once recognised as a Hollywood 'love rat'.

His second marriage to Coan comes more than 15 years after his 2003 divorce from Sadie Frost, the mother of three of his five children: Rafferty, 24, Iris, 20 and Rudy, 18.

Law and Frost met on the set of film Shopping when Law was just 19 – it was his first major leading role. Frost was a 25-year-old married mother-of-one, but she divorced her husband, Spandau Ballet's Gary Kemp, in 1995.

Law was 30 when he and Frost parted ways. They divorced in 2003, the same year he met Sienna Miller while filming Alfie.

Law and Miller became engaged in 2004 after Law proposed on Christmas Day, but the pair never made it down the aisle as just months later Law was forced to make a public apology after it was revealed he had been having an affair with his children's nanny while he was filming All The Kings Men in the United States.

"Following the reports in today's papers, I just want to say I am deeply ashamed and upset that I've hurt Sienna and the people most close to us," his statement said.

"I want to publicly apologise to Sienna and our respective families for the pain that I have caused. There is no defence for my actions which I sincerely regret and I ask that you respect our privacy at this very difficult time."

Miller called off their engagement, but the couple worked on their relationship for more than a year following the affair. They called it quits in 2006.

It was then that Law embarked on his 'bachelor years', which led to two more children to different mothers.

In a recent interview with Daily Beast, Miller opened up about the public unravelling of her partner's affair.

"It was really hard. And the other thing was, it was at the height of all that paparazzi madness, and in London where there was an epidemic of bad behaviour. They knew where I would be every night," she reflected.

"There's a whole six weeks of that experience that I don't remember," she shared. "I have no recollection of it. People who came to see me said we had dinner, and I don't remember. I was in so much shock over it all. And I'd really just begun. I was only 23. But if you get through that, you feel like you can get through anything."

Law and Miller later reunited in 2009 – the same year his daughter Sophia was born to American model Samantha Burke.

Law and Burke, who was working as a Hooters waitress at the time, met outside a nightclub while Law was in New York filming Sherlock Holmes. They embarked on a week-long fling which led to Sophia.

Harding, who was 23 years old when Law announced her pregnancy, started dating the actor in 2014, spending six weeks with him on location in the Czech Republic, where the baby is rumoured to be have been conceived. Harding is 18 years younger than Jude and five years older than his eldest son Rafferty.

They broke up before Ava was born but it all played out rather harmoniously, considering Law met his new wife Coan (and was dating another woman, Rachel Bourlier) around the same as Ava's birth. Now that's complicated.

Harding has praised Law for being a "hands-on dad" and has said Ava spends time with Law's other children, her half-brothers and sisters.

After being introduced to Coan in early 2015, Law put his bachelor behaviour behind him – well, after he broke up with French journalist Bourlier who claimed to have been dating him for "some time" and said she discovered he was dating Coan from media reports.

Bourlier claimed that Law apologised to her via text message, insisting he hadn't meant for her to find out that way.

Once that was done and dusted, Law and Coan kept their relationship very private – especially in comparison to his high-profile Hollywood relationships of the past – but Law has spoken of his love for Coan on US TV show Modern Living.

"I'm very, very happy. Our relationship is a very private thing, and I think part of the fact it works so well is exactly because of that," he said.

Reflecting on his past relationships in 2016, Law said he regretted some of his past behaviour.

"I regret hurting people. It’s an awful thing. And trying to gain the forgiveness or the understanding of someone you’ve hurt, or heal a pain you may have inflicted, that’s where regret hits hard," he said, according to The Mirror.

"To regret something is almost to regret the lesson learned from it. And if you’ve learned your lesson, then it was probably a good thing in some way. F***ing up or being an idiot and having to pay the consequences for that? It’s how you learn."

With his marriage to Coan, it seems Law has learned all the lessons he needed.