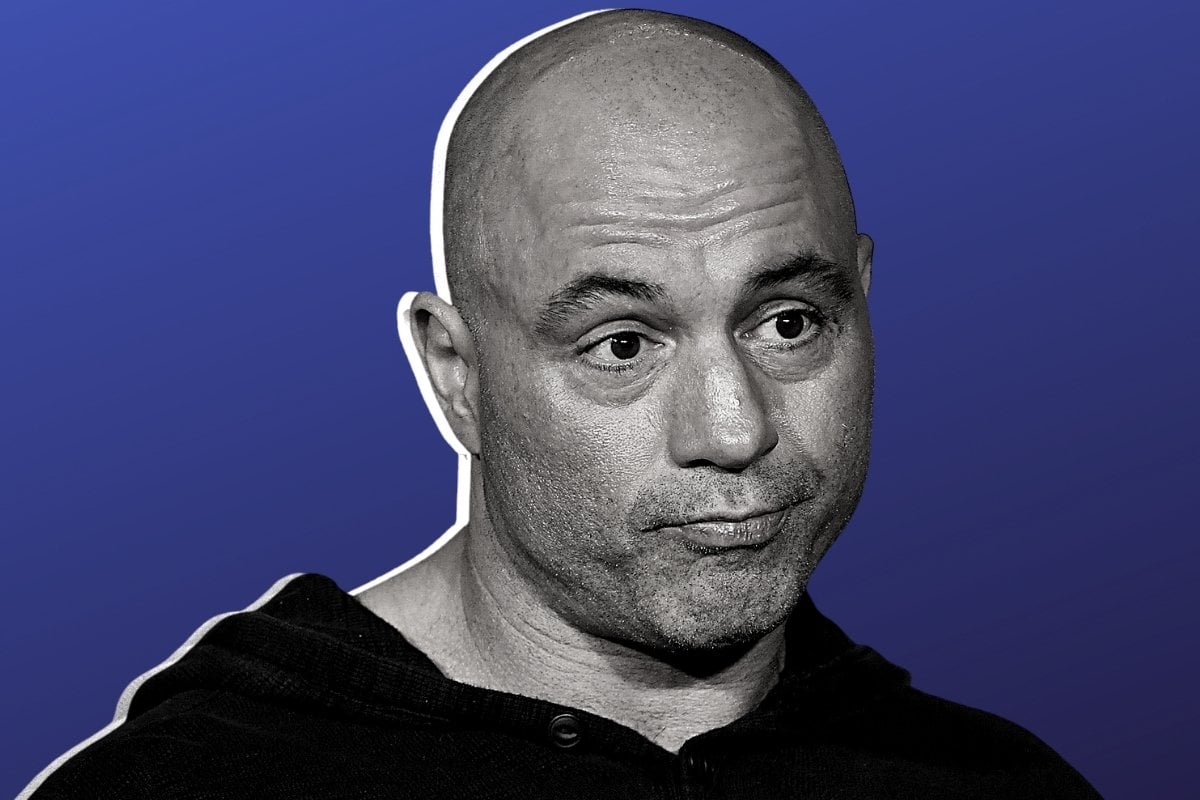 It seems Joe Rogan has made a rapid recovery from his COVID-19 infection.

Just days after his diagnosis made international headlines, the American comedian returned to his juggernaut podcast, The Joe Rogan Experience, eager to assure his millions of listeners that all is well. (Minus occasionally coughing up of some small lumps of "green s**t".)

In fact, the 54-year-old said he was only truly ill for a single day.

By only developing mild symptoms, Rogan is among the vast majority of COVID-19 patients. And thank goodness for that.

But when speaking on his podcast on Tuesday, he seemed to suggest that he 'knows' why he fell into that fortunate camp. And that is when things got problematic.

Joe Rogan, ivermectin, and the spread of misinformation.

Rogan said that on the day he was diagnosed with COVID-19 — August 28 — he started on an at-home treatment regimen that included high doses of vitamins via an intravenous drip, along with a cocktail of drugs. Among them, the increasingly controversial ivermectin.

Ivermectin was originally developed to treat parasitic infections in animals. It's been produced for human use since 1987, where it's prescribed to treat parasitic illnesses such as river blindness and scabies, as well is in a topical formation for the common inflammatory skin condition rosacea.

It's an incredible drug. It even earned its developers a Nobel Prize. But there is simply no robust evidence that it's safe to use for treating COVID-19.

One small review in 2020 found an improvement in survival among patients who received ivermectin in addition to other treatments, but the authors made it very clear that the quality of evidence was "very low" and further investigation was necessary. That was followed by several studies, including a larger randomised clinical trial, none of which found significant enough benefits to recommend ivermectin for use in treating or preventing COVID-19.

But by then, some people had already clung to the idea of ivermectin as some sort of pandemic wonder weapon.

Rogan's doctor must be among them; the podcaster says that's where he sourced his doses, adding that "multiple doctors told me to take it".

But most doctors wouldn't agree, and for good reason. Ivermectin has not been approved by national health regulators for use as a COVID-19 treatment, nor does the drug's own manufacturer recommend it for that purpose.

By tying this drug to his swift recovery, Rogan is therefore only fuelling dangerous behaviour among folks desperate to get their hands on it.

And desperate they are. The Guardian recently reported a tenfold increase in illegal imports of ivermectin into Australia (where it's only available via a prescription), and just last week, Westmead Hospital in Sydney treated a COVID-19 patient who overdosed on the drug after purchasing it online.

There are also concerning reports here and abroad of people taking the veterinary version. In the US state of Mississippi for example, health authorities revealed that 70 per cent of calls to its poison information line were related to "ingestion of livestock or animal formulations of ivermectin purchased at livestock supply centres".

Listen: The Quicky checks in with some friends overseas, as well as an expert in Australia, to find out if the rest of the world is learning to live with the virus. (Article continues below.)

The problem is not what Joe Rogan chooses to put into his own body. It's that he parrots those unproven methods on his huge and hugely influential platform. (While recent numbers aren't public, in 2019 Rogan claimed that the show had 190 million downloads a month.)

It's a line he's trodden before. Like that time he said that "masks are for b*****es". Or that time he falsely claimed that vaccines will increase the chance of virulent mutations of COVID-19. Or that time he said a young, healthy person who eats well and exercises doesn't "need to worry" about getting a COVID vaccine to protect themselves from illness.

In Tuesday's episode, he was prescriptive about the doses of Vitamin C he took. He made clear links between his fast recovery and an unproven drug. And if that weren't enough, he suggested that he likely wouldn't have experienced symptoms at all were it not for a late, alcohol-fuelled night playing pool.

"The thing that f***ed me is drinking," he said. "If I went home early, went to the hotel early on Friday night and got sleep like I normally do, I bet it would have never got me."

As if sleep and a low blood alcohol reading are prophylactic against COVID-19.

Still, Rogan insisted the overall message he was sharing about his experience wasn't a "bad message".

"My message is: be healthy," he said. "And obviously, there's some merit to that, and merit to being consistently healthy."

If only he wasn't sucking on a fat cigar while he said it.

Reply
Upvote
3 upvotes
Joe Rogan has a steroid-using body-builder's outlook on supplements and is a sucker in miracle cures. He's confessed to regularly using human growth hormones, yet won't take an 'rushed-through' vaccine?
If you listen to JR's podcasts when he's got doctors and scientists on, that deal in nutrition or have knowledge of steroids, he's basically milking them for information on how to embark on a personal regime. He's undertaken all sorts of bizarre diets - no plants, paleo, hardcore kedo and the tone isn't investigative, he seems to be looking at even the most out-there regimes, as therapeutic. Rogan is essentially riding the same 'wellness', look after your immune system wave as Pete Evans and the like, while not being as stridently anti-vax.
I started to listen to his earlier podcasts, that were a year or two old and initially enjoyed them, but the wellness schtick, constant 'fat/unfit people get what they deserve with COVID' themes got real old, real fast. I can't listen to him any more, he's starting to believe to much of his own BS. Worth mentioning, he's also right into trying to prove that aliens have visited Earth.
It's essentially a flex - I'm so fit that my age and COVID aren't enough to stop me. Rogan very much has a position, that he's trying to prove, that is anti-mask, anti-restriction and he's getting more entrenched, the more he is challenged. While Rogan claims to vote on the left, his position on public health orders and COVID treatment is heavily borrowed from America's rabid right, and like them, he's clinging to any snippet of information that points to the efficacy of his misguided beliefs.

Reply
Upvote
2 upvotes
@gu3st the best description I've heard of him is that he's Gwyneth Paltrow/GOOP for men.
C
cat 4 months ago

Reply
Upvote
@rush I was about to say thats unfair on Gwyneth, then I did a quick google and found " she suggested long Covid could be treated with “intuitive fasting”, herbal cocktails and regular visits to an “infrared sauna”.
G
gu3st 4 months ago