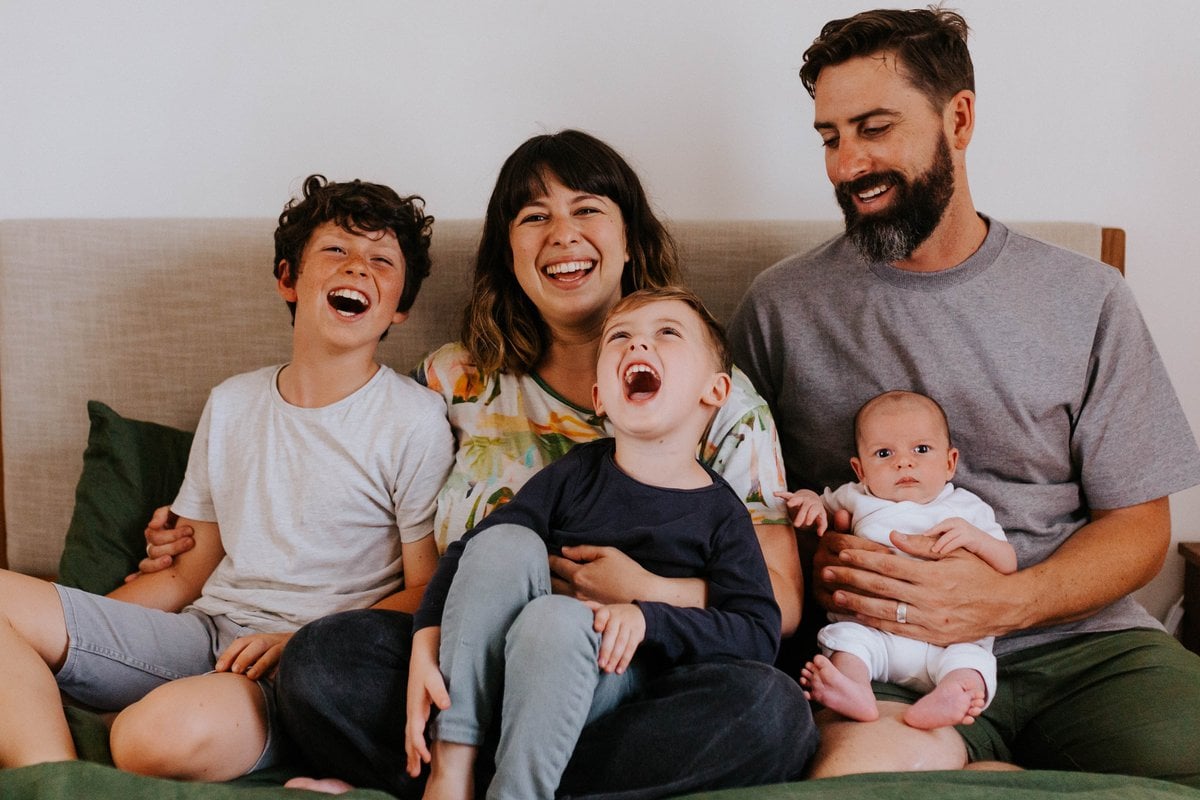 When Becca had her first son Dylan, she was a 21-year-old student living in the UK.

None of her student friends had kids and barely any of her mother's group of friends were in their twenties.

"I looked even younger than I was and people often asked, 'Are you the mum?'" Becca recalls.

"I remember one instance in a supermarket when the lady on the checkout said, 'Oh you're a young mum!' and I thought, what exactly was I supposed to say to that?"

"I had all these answers in my head that were smart or cheeky like, 'It must be the botox', but I'd mostly just shrug it off. I was his mum, and I was 'old enough'. Biologically, women and girls can have children after they start their periods, which is a lot younger than 21."

This judgement Becca felt for being a young mum was the first time she encountered feelings of mother guilt.

"There is this societal assumption that teen pregnancies are bad and that young mums can't be good mums. It was hard to always justify myself and the truth of it was I felt good. I was 21, and invincible! I only needed four months off before going back to university and I remember people feeling sorry for me while I just thought, hang on a minute, I've had a baby, I'm not ill!"

The mum guilt she felt wasn't just about her age, but that baby Dylan didn't have all the nice things some of her older mum friends could afford.

"I was a student living in a small rental flat and we had the worst pram and few toys or gadgets. We weren't 'set up' with a nice home or fancy car and we were still working out what our family looked like. Dylan sort of grew up with me.

"I suffered with a lot of 'comparisonitis' in the early days of Dylan's life, but as the years passed, all the mums I knew had challenges and hard times but at that stage, mine was being the young mum."

Becca and Dylan left the UK in 2011 to travel to Newcastle, Australia to live closer to Dylan's dad's side of the family, but the relationship didn't work out.

"I didn't know anyone or have a job and I soon split up from Dylan's dad. I had no local family support, and I felt completely unemployable. It was a really hard few years as I tried to fit work in around parenting. I also didn't drive, and it was very isolating."

Eventually, Becca got a job at a pub in the evenings and she put her conceptual art degree to use by investing in a hammer and starting an Etsy shop selling engraved silverware and jewellery.

"During this time I was adapting to life as a single mum and going through the court process which made me very aware of all my shortcomings as a parent. It damaged my confidence and having to live as a broke single mum was really tough."

Listen: Jacinta Tynan talks about being a single mum on the This Glorious Mess: Little Kids podcast. Post continues below.

Slowly but surely, Becca's Etsy business House of Bec took off. She also met her soulmate and now husband Jono, on Tinder.

"I didn't mention Dylan on my profile as I wanted him to see me first as a person, not just a mum. I had to bring it up pretty early in our chatting however and he was pretty cool with it!"

Jono and Becca wed 18 months after they met in 2016 when Becca was eight months pregnant with baby Ellis.

"I had been working hard on my solo business venture which was going well, but I knew before I had Ellis that I could never scale it up. It was a hard decision to close it down and once again be unemployed.

"I then had all this mum guilt that Jono was working so hard to support us while I stayed home and there was a lot of financial pressure on him. His life had changed drastically in such a short time and I wanted to contribute to the household finances. While being a parent is wonderful, I also missed working."

When Ellis was a tiny baby, Becca had an idea to start a new business with her sister Jess in the UK that made cute and colourful lockers.

"I started studying at night and I was working hard to start Mustard Made from scratch.

"I got really busy and then felt guilty about missing the daily aspects of my boys' lives.

"Ellis' daycare would tell me what he'd been doing, and I'd think, 'Wow I didn't know he could do that' and then beat myself up for it."

In 2020, Becca's third baby boy, Otis was born. By this stage, Mustard Made had become hugely successful. Jono took on most of the day-to-day parenting and Becca had to make concessions to her mothering.

"I remember Otis' home birth being really beautiful and calm, but the next day, I was back on the phone to my sister about work!"

Jono took leave to allow Becca to keep on managing the business, but that didn't stop the guilt.

"I still had this idea that I would breastfeed Otis for 12 months and not send him to daycare until he was nine months old. I was fighting bottle feeding because I wanted to feed him but the fact was, I was making it so much harder for myself and Jono.

"I realised I was treating myself a lot harsher that I would a mum friend and I had to fight that guilt really hard.

"While I had become the main breadwinner of our family, I had not adjusted my expectations for mothering. We eventually sent Otis to daycare when he was six months old as we were not managing, and honestly it was such a relief.

"I needed the help, and I needed to be good at my job so I could come home and be a good mum. But of course I felt guilty because I'll always wonder if I chose work over parenting, or if I savoured that first year with Otis as much as I could have done." 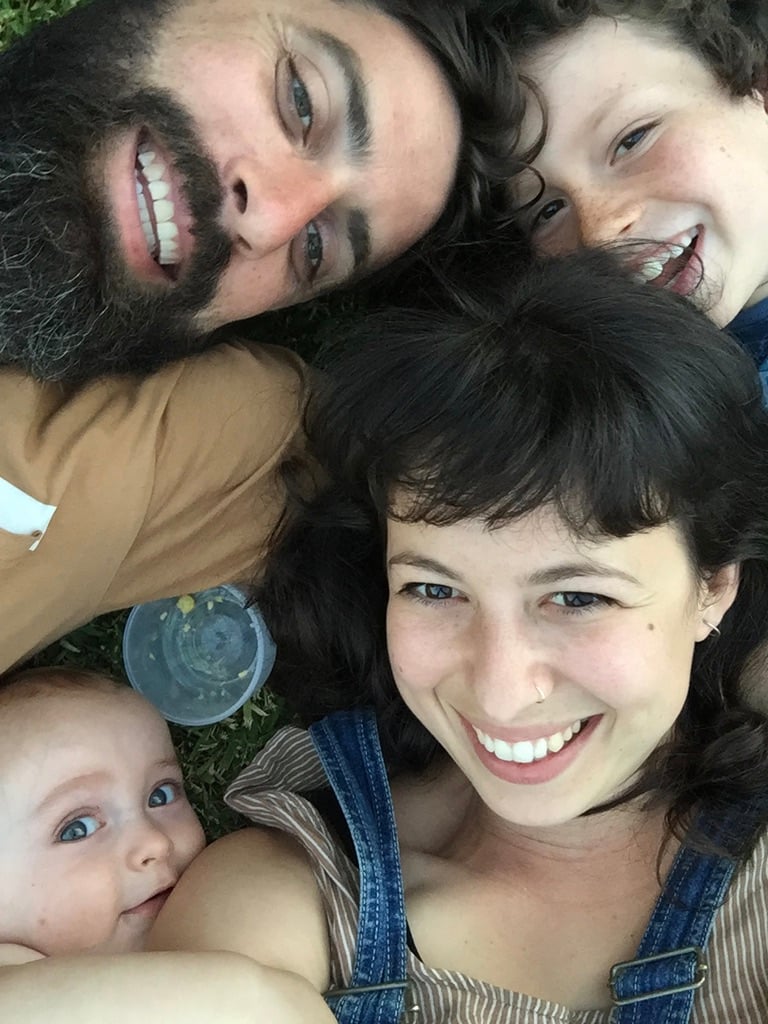 After such unique experiences with each of her babies, Becca realises looking back that there is no perfect path to take, but that guilt stops you enjoying the choices that you make.

"I've learnt that feeling guilty about being a young mum or a stay-at-home mum or a working mum, means you miss out on what you are actually doing. I have had to choose to stand up against the guilt as it literally comes at you from all angles.

"What has helped me most is looking at my oldest son Dylan, now aged 12, who is happy and resilient and loved. We have had our challenges but I know that through all the changes and shifts I have always loved my kids hard and that not everything in their lives has to come down to me.

"My boys have always known that both mum and dad work, and both mum and dad can cook dinner or pick them up from school. And actually, Jono is better at bedtimes than me and more organised than me for our family plans - and finally I think I am okay with that."