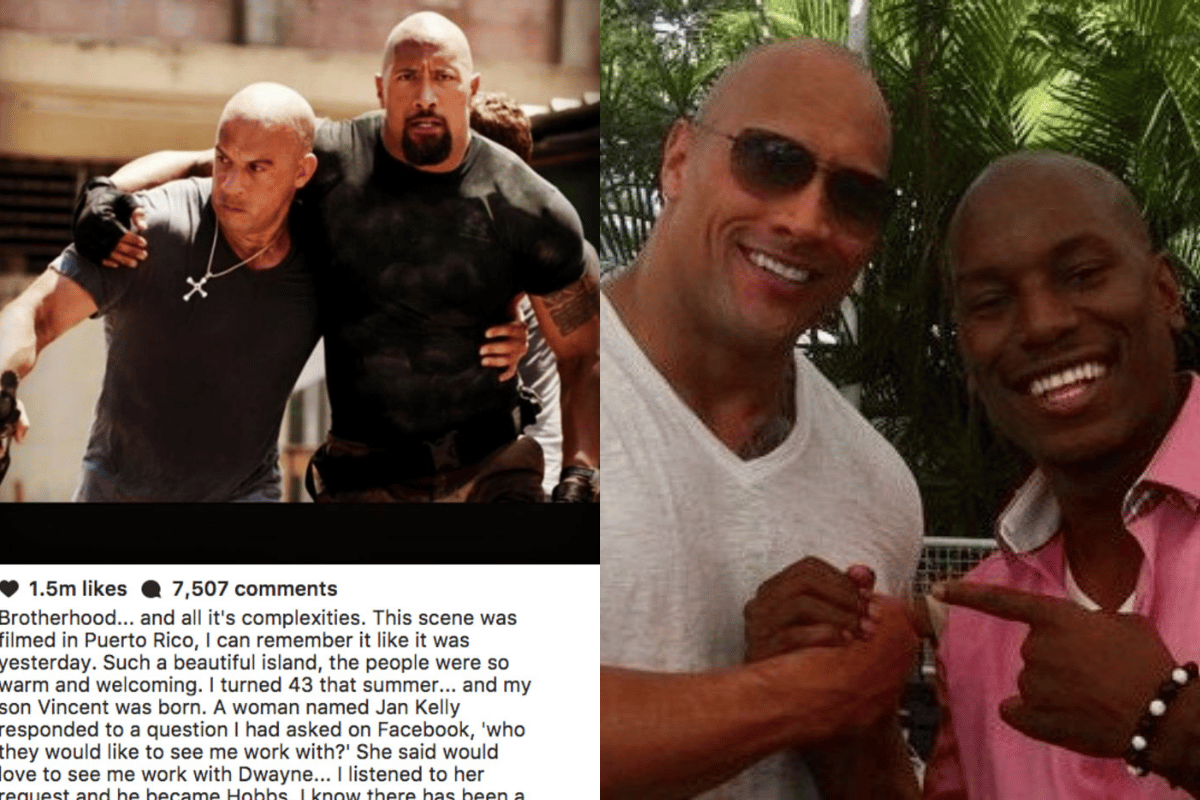 Fast and Furious is not nearly as explosive on camera as it is behind the scenes.

We were introduced to the franchise back in 2001. Twenty-one years on and we're still getting new films - filled with street racing, heists, spies and our family favourites - every few years.

While you're here, watch the 7 best on-screen crying faces. Post continues after video.

Over the years, it's been able to rake in a reported US $1.5 billion. According to reports, each Fast and Furious film has made at least $200 million, and six have made more than $500 million.

However, throughout the years, we've been exposed to some pretty feisty feuds between the world's biggest stars - from Dwayne 'The Rock' Johnson to Vin Diesel. And with the recent news that the director of the latest movie has quit, we thought we'd just spell out all the behind-the-scenes dramas right here, right now.

Justin Lin steps down as director of Fast X, 10 days into shooting.

The most recent development all has to do with Justin Lin, who was the director of the last five Fast and Furious films. He abruptly stood down from his role on the latest instalment, Fast X. Here's the catch though - he parted ways while he, the crew and the cast were already 10 days into filming. 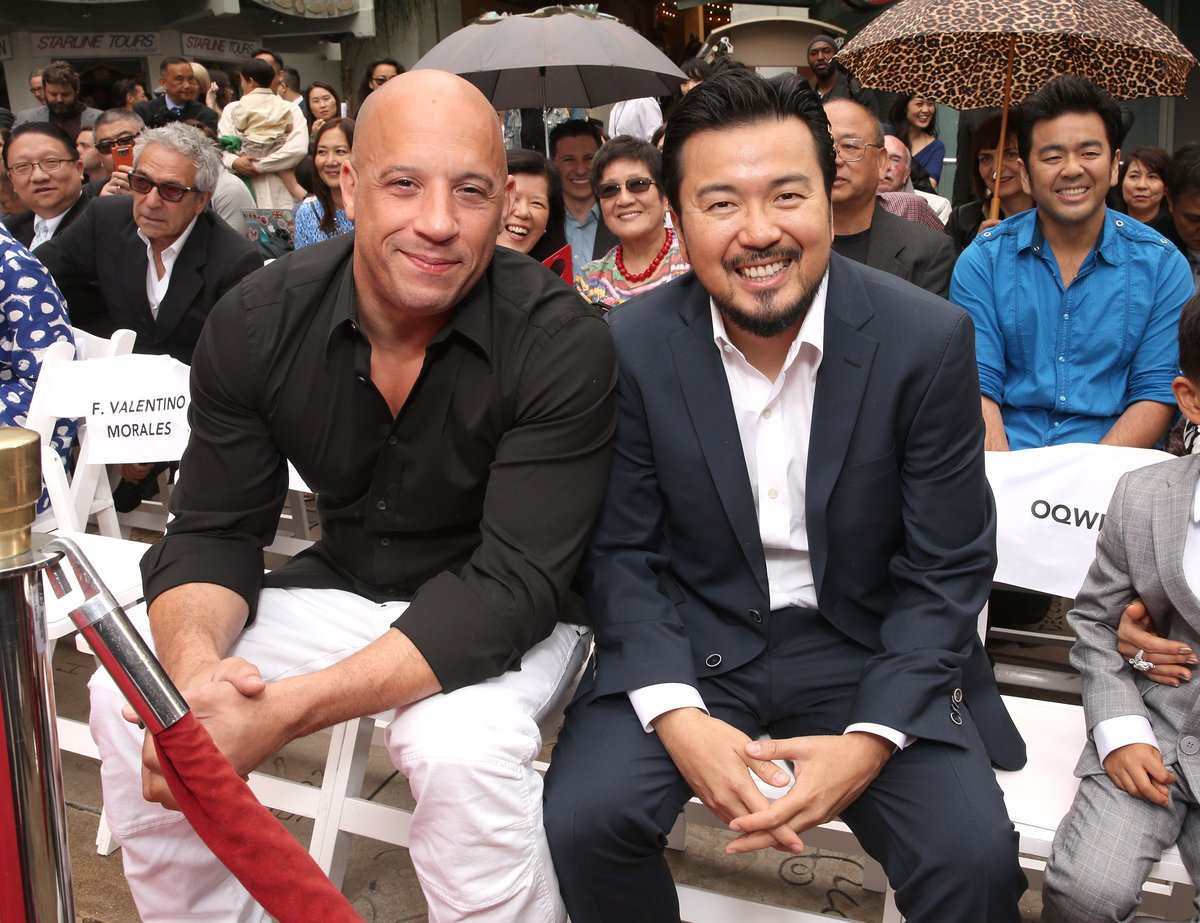 He was expected to direct Fast X, but has stood down due to 'creative differences'. Lin will instead be a producer on the movie.

"Over 10 years and five films, we have been able to shoot the best actors, the best stunts, and the best damn car chases. On a personal note, as the child of Asian immigrants, I am proud of helping to build the most diverse franchise in movie history," Lin said in a statement this week.

"I will forever be grateful to the amazing cast, crew and studio for their support, and for welcoming me into the Fast family," he added.

What happened between Dwayne Johnson and Vin Diesel? 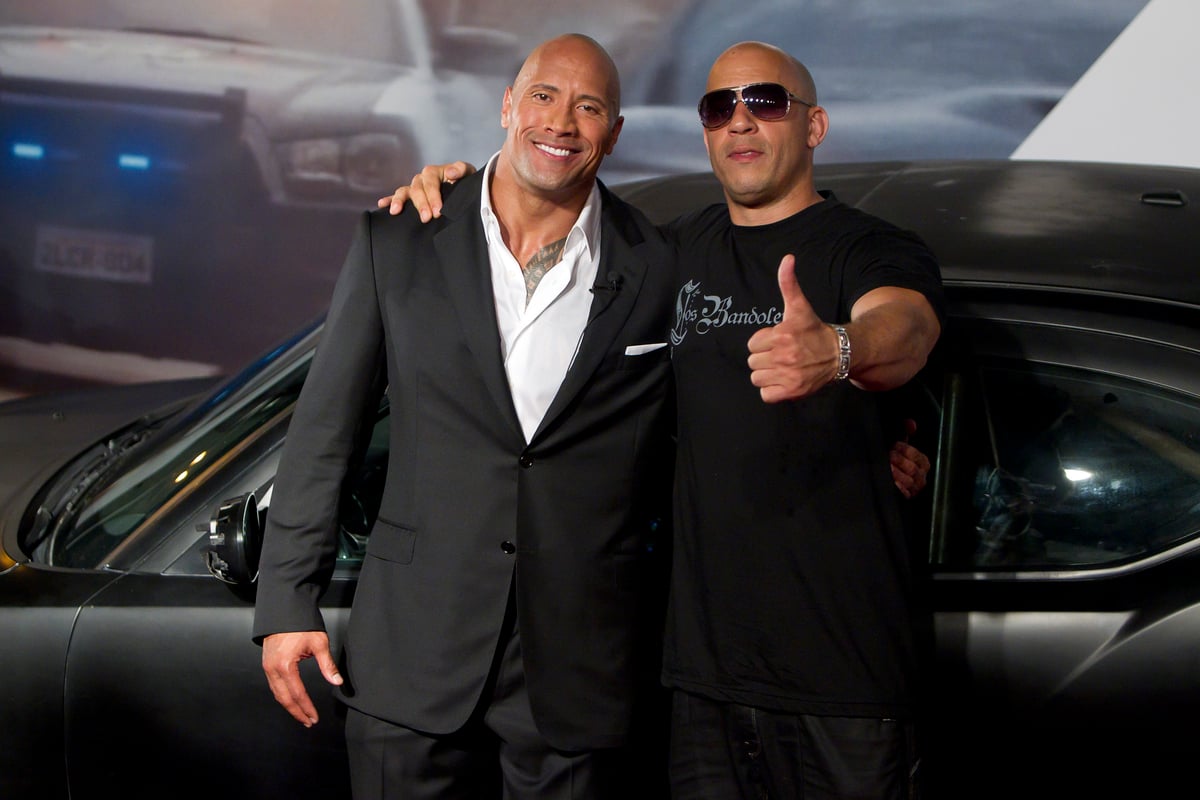 The Rock and Vin Diesel first began feuding in 2016.

They made their on screen debut together in 2011’s Fast Five, in which the former wrestler-turned-actor joined long-running franchise as 'Luke Hobbs'.

While all seemed to be working out both on and off-screen, Johnson created issues in August 2016 when he referred to unnamed members of the Fast and Furious cast as "candy a**es" in an Instagram post.

"Some [male costars] conduct themselves as stand up men and true professionals, while others don't," he wrote in the caption before deleting the post.

"The ones that don't are too chicken s**t to do anything about it anyway. Candy a**es. When you watch this movie next April and it seems like I'm not acting in some of these scenes and my blood is legit boiling - you're right." 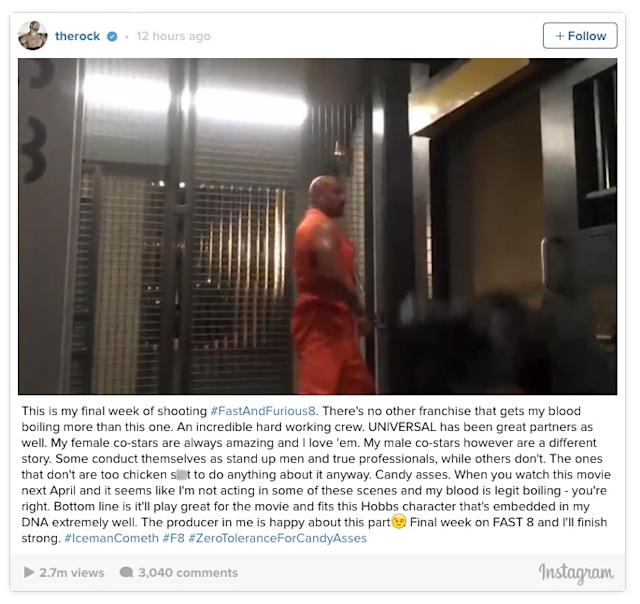 A few days later, Johnson went on to make another post to social media where he thanked cast mates by name, but conveniently did not mention Diesel.

"I shouldn’t have shared that," Johnson explained in October 2021 to Vanity Fair. "Because at the end of the day, that goes against my DNA. I don’t share things like that. And I take care of that kind of bulls**t away from the public. They don’t need to know that. That’s why I say it wasn’t my best day."

At the time of posting and deleting, rumours began to circulate that the actor's post was made in reference to his famous co-star.

Diesel went on to essentially confirm he was the one Johnson was referring to when he said in an IG video: "Honestly, give me a second and I will tell you everything. Everything."

Interestingly enough, Diesel back tracked in an interview later in 2017, explaining that he and Johnson were "close friends".

"I don’t think the world really realises how close we are, in a weird way," he told USA Today. "I think some things may be blown out of proportion. I don't think that was his intention. I know he appreciates how much I work this franchise. In my house, he’s Uncle Dwayne." 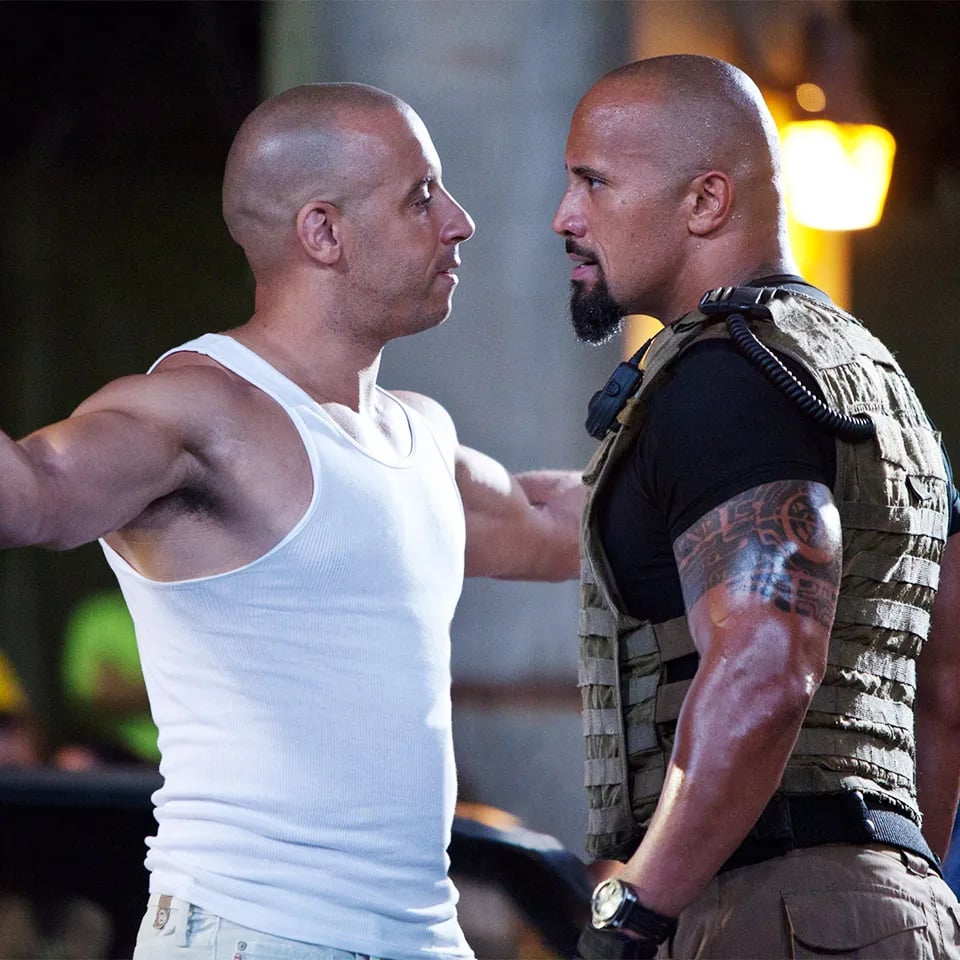 It would later be revealed Diesel had been particularly "tough" on his co-star, as he is a producer for the franchise.

"My approach at the time was a lot of tough love to assist in getting that performance where it needed to be," Diesel told Mens Health. "As a producer to say, 'OK, we’re going to take Dwayne Johnson, who’s associated with wrestling, and we’re going to force this cinematic world, audience members, to regard his character as someone that they don’t know' — Hobbs hits you like a tonne of bricks.

"That’s something that I’m proud of, that aesthetic. That took a lot of work. We had to get there and sometimes, at that time, I could give a lot of tough love. Not Felliniesque, but I would do anything I’d have to do in order to get performances in anything I’m producing.”

The Rock later admitted he "laughed" and "laughed hard" after hearing about Diesel's "tough love" approach.

Johnson may have been a permanent character for the films, but after not appearing in 2021's F9, he confirmed his days with the franchise were over.

The feud was squashed but temporarily reignited after Diesel made a public plea on Instagram for Johnson to reprise his Fast and Furious role - which the Jumanji actor called "manipulation".

"I didn't like that he brought up his children in the post, as well as Paul Walker's death. Leave them out of it," Johnson told CNN. "We had spoken months ago about this and came to a clear understanding. My goal all along was to end my amazing journey with this incredible Fast and Furious franchise with gratitude and grace."

Johnson went on to admit that he felt "surprised" by Diesel's approach as he had made his decision clear.

"This past June, when Vin and I actually connected not over social media, I told him directly — and privately — that I would not be returning to the franchise," he said. "I was firm yet cordial with my words and said that I would always be supportive of the cast and always root for the franchise to be successful, but that there was no chance I would return."

What happened between Tyrese Gibson and Dwayne Johnson? 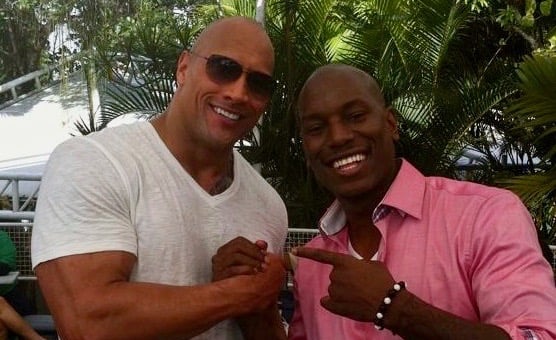 Back in 2017, actors Tyrese Gibson and Dwayne Johnson become embroiled in a feud that left Gibson threatening to walk away from the Fast and Furious franchise altogether.

It began with a photo of Johnson reviewing a movie contract for his Agent Hobbs spin-off, which Gibson largely protested to.

"If you move forward with that #Hobbs Movie you will have purposely ignored the heart-to-heart moment we had in my sprinter," he commented on a post of The Rock, via Digital Spy. "I don’t wanna hear from you until you remember what we talked about. I’m on your timeline cause you’re not responding to my texts messages. #FastFamily is just that a family... We don’t fly solo."

He also accused the former WWE star of being the reason F9 was delayed, accusing him of "breaking up" the Fast and Furious family.

"#PSA Congratulations to @TheRock and your brother-in-law aka 7 bucks producing partner @hhgarcia41 for making the fast and the furious franchise about YOU," he wrote on Instagram.

A year later in 2018, Johnson spoke out about their relationship, labelling their fall out as "disappointing".

"That whole thing with Tyrese, it was pretty disappointing because I’ve been friends with Tyrese for a very long time. And, you know, I always feel like a beef requires two people to actually jump in it, and it was really one-sided, and he had voiced his opinion a lot on social media," he said on Watch What Happens Live.

However, it seems the pair have turned over a new page, with Gibson explaining on The Ellen DeGeneres Show, to guest host Tiffany Haddish, that they had "reconnected".

"We’ve been on the phone every other day. We reconnected in a real way," he said back in 2021. "I think we’re both better men on the other side of all that stuff that went down.

"We’re about 20 phone calls in and we’re in competition right now on who can leave the longest voice note."

What happened between Michelle Rodriguez and the Fast and Furious franchise? 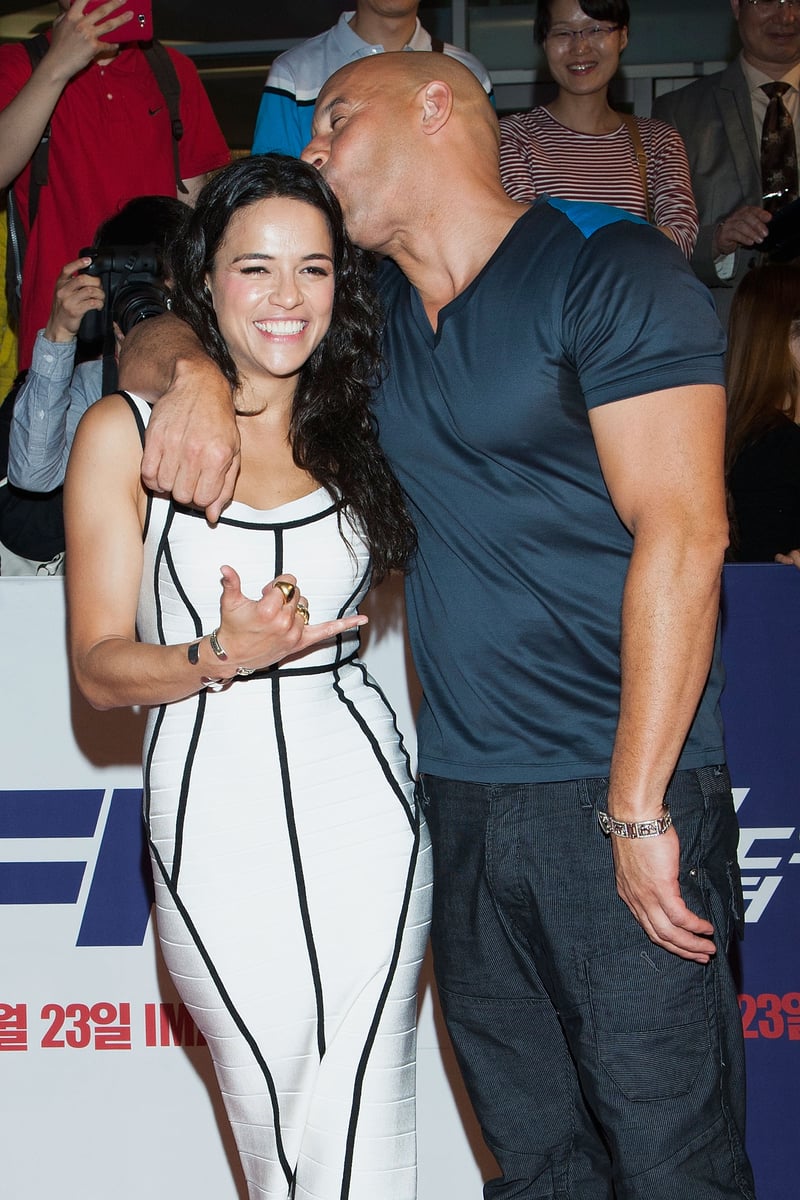 It seems Michelle Rodriguez, who plays street racer 'Letty Ortiz' had her own beef with the franchise back in 2017.

In June of that year, the actor admitted she was thinking of quitting.

"I hope they decide to show some love to the women of the franchise on the next one. Or I just might have to say goodbye to a loved franchise," she wrote in a post to Instagram. 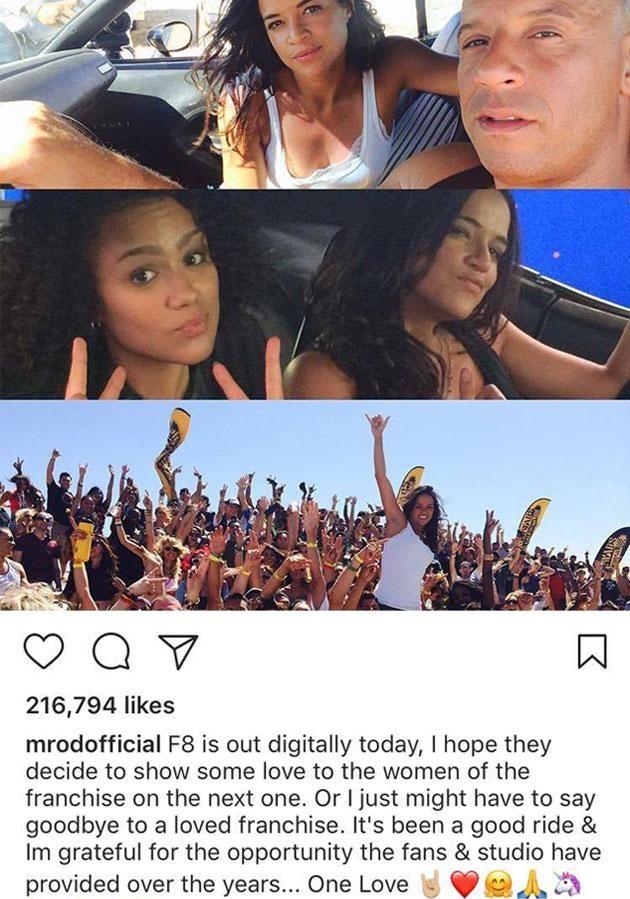 It was rumoured Rodriguez's post was a pointed jibe at Vin Diesel, who has largely become the face of the franchise. However that rumour was quashed when the pair shared clips alongside each other, just a few weeks after the comment was made.

Rodriguez has appeared in all of the subsequent Fast films.

The 10th Fast and Furious film will welcome new cast member Brie Larson, and is expected to be released in May 2023.