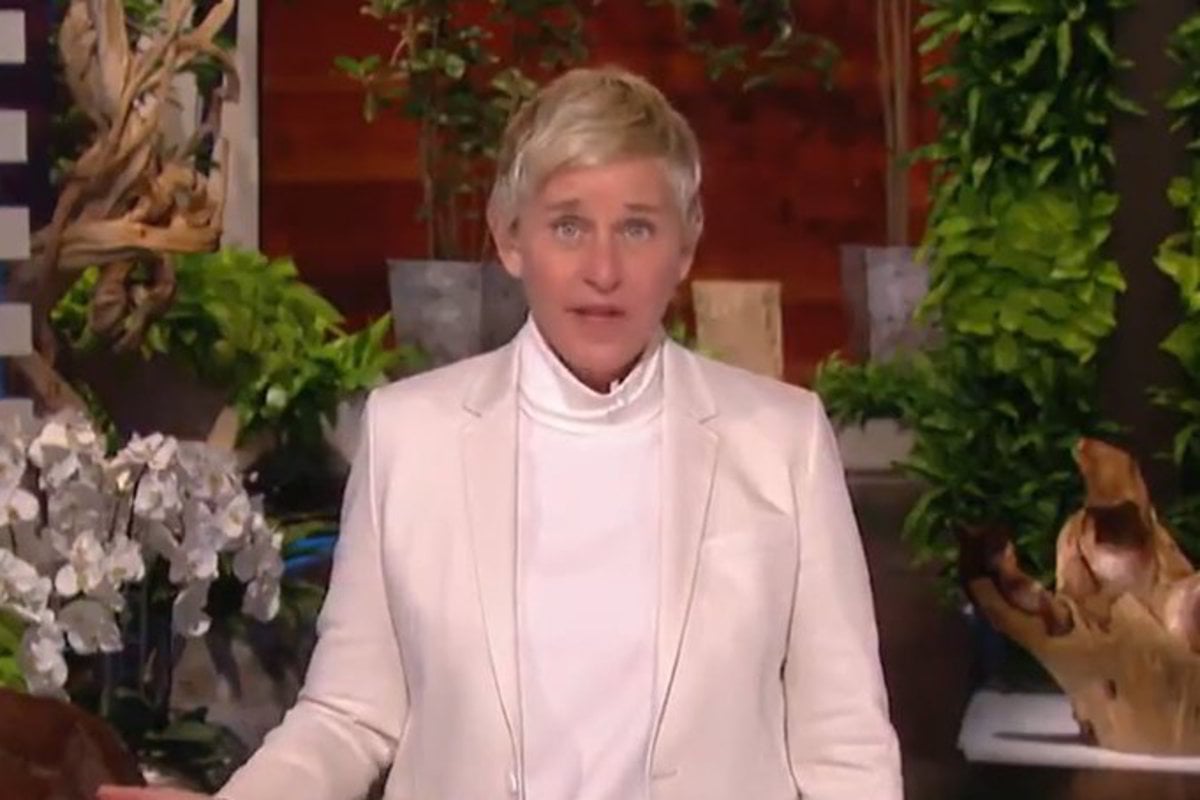 Ellen DeGeneres has returned to her talk show for the first time since her 'cancellation'.

"Today we're starting a new chapter," it was titled.

In case you missed it, the 62-year-old has been at the eye of a months-long media storm that has upended the public perception of the popular presenter. Essentially, past and present employees have claimed that DeGeneres isn't as nice as she says she is. Plus, several executive producers on the show have been accused of bullying other members of staff.

In July, BuzzFeed News published an investigative piece that outlined the "toxic work culture", including a black woman who says she experienced racist comments. There are also allegations of sexual misconduct on set.

The employees told the publication that they "faced racism, fear, and intimidation". Importantly, most of the accusations were levelled at the executive producers and managers working on the show, and not Ellen herself.

In the almost-five minute long monologue ahead of her latest season, 62-year-old DeGeneres addressed the allegations.

"How was everybody's summer? Good? Yeah? Mine was great," she said sarcastically, having spent the summer in lockdown and dealing with the fallout of multiple rumours from past employees.

Speaking in front of a virtual audience due to the COVID-19 pandemic, DeGeneres addressed the allegations.

"As you may have heard this summer there were allegations of a toxic work environment at our show and then there was an investigation. I learned that things happened here that never should've happened," she said, echoing a letter sent to staff amid the fallout in July.

"I take that very seriously, and I want to say I’m so sorry to the people who were affected."

DeGeneres said she knows she is in a position of great privilege and power, and takes responsibility for what happens at her show.

She alluded to changes made at the workplace, which involved the firings of top producers Ed Glavin, Kevin Leman and Jonathan Norman, without explicitly saying what they were.

She also addressed media reports and rumours she was not who she appears to be on TV - a woman who preaches kindness, and ends each show with "be kind to one another".

"Being known as the 'be kind' lady is a tricky position to be in... The truth is, I am that person that you see on TV.

"I am also a lot of other things. Sometimes I get sad. I get mad. I get anxious, I get frustrated, I get impatient, and I am working on all of that. I am a work in progress."

She said her intention was to always be the best person she can be, and apologised to anyone she had let down.

Public reaction to the apology has been mixed, perhaps skewing towards negative.

Variety said it "fell short": "It's likely that for DeGeneres, the topic ends here: Unspecific and studded with glancing apologies for anyone who might have been affected by the climate she oversaw, her address had a feeling of obligation, and of being over it all," TV critic Daniel D'Addario wrote.

"While her apology seems to have its heart in the right place, there is a distancing effect in this careful, certainly legally-vetted word choice that separates Ellen from much accountability. 'I learned' is doing a great amount of work here, casting DeGeneres as an innocent bystander who immediately sprung into action upon learning of the injustices perpetuated by the show she allegedly runs," Kevin T. Porter wrote for The Independent.

On social media, users had similar feelings (articulated with more memes); they were mostly suspicious of her authenticity and accountability.

she didn't even address anything specifically, and used it as a vehicle to make jokes and deflect by mentioning everything else shitty happening in the US. plus ellen's not even funny anymore.

Ellen DeGeneres be like: Sorry for the constant negativity at my workplace, it’s just I am human too and so i’ve been working on developing my character pic.twitter.com/uvueOGRUMz

DeGeneres' first guest of season 18 was actress and comedian Tiffany Haddish, who passionately defended the host.

"It means so much to me that you’re my first guest," DeGeneres said.

"Let me just tell you, I was listening to your speech and you talking about be kind lady. I don't like people accusing you of all these things. You can't always know what's going on."

Other big names to throw their support behind DeGeneres include Katy Perry, who tweeted about her positive experiences on The Ellen DeGeneres Show in early August.

1/2 I know I can’t speak for anyone else’s experience besides my own but I want to acknowledge that I have only ever had positive takeaways from my time with Ellen & on the @theellenshow. I think we all have witnessed the light & continual fight for equality that she has brought

2/2 to the world through her platform for decades. Sending you love & a hug, friend @TheEllenShow ♥️

It’s crazy to see my friend go thru what she’s going thru publicly. I have known Ellen for years and I can honestly say that she’s one of the dopest people on the fucking planet. She has treated my family and my team with love and respect from day 1. The internet has become a crazy world of negativity....we are falling in love with peoples down fall. It’s honestly sad...When did we get here? I stand by the ones that I know and that I love. Looking forward to the future where we get back to loving one another....this hate shit has to stop. Hopefully it goes out of style soon....This post is not meant to disregard the feelings of others and their experiences....It’s simply to show what my experiences have been with my friend. Love you for life Ellen...

"It's crazy to see my friend go thru what she's going thru publicly. I have known Ellen for years and I can honestly say that she's one of the dopest people on the f**king planet. She has treated my family and my team with love and respect from day 1," he wrote.

Reply
Upvote
2 upvotes
"She's always been nice to me!" That doesn't mean that she is nice to everyone, famous celebrity person. There are too many stories out there about her being awful for this "apology" to mean anything.
F
fightofyourlife a year ago