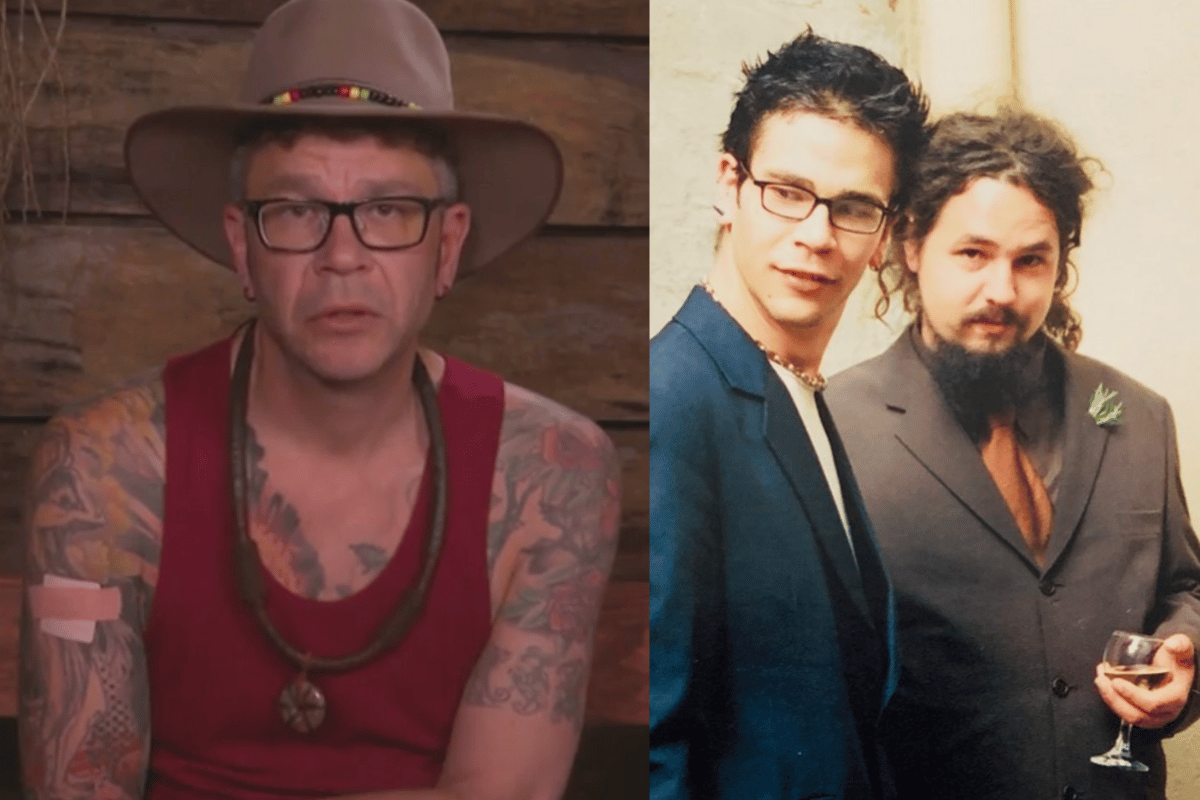 Radio, television, music: Dylan Lewis has done it all.

First rising to stardom on ABC's Saturday morning music show Recovery, personality and radio host Dylan has made a name for himself in the Aussie media landscape. He is currently appearing on I'm A Celebrity... Get Me Out Of Here! where he has become a fan favourite.

But it's his personal story and the experience of losing his brother to suicide that has resonated with viewers, given many of us have a loved one impacted in some way by mental health. Competing to raise money for Lifeline on I'm A Celebrity... Dylan Lewis has shined a light on these important conversations.

Here's everything we know about Dylan Lewis.

Dylan Lewis spills the rice and beans re I'm A Celebrity... Post continues below.

Dylan was born in 1973 and grew up in Melbourne.

During high school Dylan's love for music flourished, and as a student he was heavily involved in both the drama and music programs at school.

After graduation, he then studied for a Bachelor of Education degree in drama and music at the University of Melbourne.

Dylan Lewis on the death of his brother to suicide.

On I'm A Celebrity... Dylan opened up about the ordeal publicly for the first time.

"We grew up best friends. He had a few mental health issues going on, and 15 years ago he took his life. Suicide is an awful thing for people to have to deal with: grief lasts forever," he said through tears.

Whilst in the jungle, Dylan is competing for Lifeline in a bid to raise much-needed funds and awareness for the charity and an open dialogue about mental health.

Listen to Mamamia Out Loud: The uncool mental illness. Post continues after audio.

"At Lifeline, they're caring, they know what to say, they're trained. The biggest message is don't second guess yourself. If you're worried about someone or yourself, just call Lifeline because the grief lasts forever."

After the episode went to air, Dylan then took to Instagram to share a picture of him and his brother, writing: "This is me and my beautiful brother, Quinn. I think about him every day and love him every day and wish he was still with us. Every day."

This week, Dylan took on the annual Viper Room challenge on I'm A Celebrity...

As someone who has a snake phobia, it was definitely not the best of experiences for Dylan, labelling it "one of the scariest things I'll ever have to do, buried alive in a grave full of snakes".

But Dylan also noted, "compared to the real trauma of losing a loved one to suicide, it's nothing".

After the Viper Room ordeal and winning the maximum amount of stars in the challenge, (meaning a yummy and fulfilling dinner for him and his campmates), co-hosts Dr Chris Brown and Julia Morris asked Dylan how he managed to cope amid the snakes.

"I found strength from my brother's stillness. He was just connected to nature and earth, and had just a beautiful stillness. And I had him in my mind a lot when I was down there. He would have said, 'you're an idiot for doing that, but well done'."

Crediting his late brother for fueling his passion for music, Dylan has had an incredibly successful career spanning over two decades, encompassing television, radio, film and music.

Dylan first shot to cult fame on ABC's Saturday morning music show, Recovery, in 1996, and went on to host an array of television music and variety shows, including 10.30 Slot, Pepsi Live and Video Hits.

Recovery was one of the top-rating music shows during its time. But Dylan's start in the industry was far from what he anticipated.

"I got the job accidentally. My girlfriend at the time, who is now my wife, saw this ad for a music-loving, music nerd to go and audition for a TV show. I was working in a toy shop and studying teaching at uni. I had a resume with all my corrections in pencil on it, a very crap resume with nothing to do with TV," he shared with ABC.

Dylan's resume was the last one to arrive, meaning it was on top of the producer's pile. Meanwhile, someone else had sent in a video of their camerawork techniques, because they wanted a job as a camera person. Their film tape happened to feature Dylan talking about a band he was in called The Brown Hornet.

"The producers went 'Oh, this is magic. Here's that guy, he's kind of funny, and he's wearing a suit'. I was about to go and collect my teaching degree, that's why I was wearing a suit for the first time while being filmed. It all came together in one weird moment. They invited me in, we chatted and the next thing you know I was on the tele."

Then in 2002, Dylan won Celebrity Big Brother Australia and also appeared as an extra in Star Wars Episode 2 – Attack of the Clones.

In terms of radio, Dylan was a mainstay on Nova for 13 years, most recently in Adelaide as co-host of Nova's breakfast show Dylan and Hayley. He is currently Double J's weekend announcer.

He is also an ambassador for Headspace, The Starlight Foundation, Smiling Mind, Ride2School Day and Artists For Kids.

In the 1990s, Dylan was playing a gig and some mutual mates invited Hollie, his future wife, to come and see him perform. Apparently for Dylan, it was love at first sight.

"When I saw her, I couldn't see anyone else in the room. Hollie was the most beautiful person I'd ever seen. At the time, I said to myself and my bandmates: 'That lady will be my wife and the mother of my children one day'," Dylan told New Idea.

Needless to say, he was right. The couple married in 2002.

This year, they will be celebrating their 20th year wedding anniversary.

Reflecting on the wedding day, Dylan said: "It was just beautiful. Hollie looked like an angelic mermaid. I started crying and didn't stop. All of the photos from our wedding look like I'm sad, even though I was the happiest I've ever been."

Hollie and Dylan then became proud parents when they welcomed daughter Rose and son Jethro to the family.

Interestingly, Hollie is a midwife, who has been on the front line in hospitals during the pandemic.

Speaking about his admiration for his wife, Dylan said to Sydney Morning Herald: "She's there at the front line every day in the hospital. We're all really careful. My daughter described it as like a world war and the enemy is a virus. For us as parents, we don't want to be alarmist, but at the same time we do need to be pretty straight up with the kids. They're adaptable, but unfortunately for them this is the new world."

Considering some of Dylan's pastimes include juggling, fire-breathing, clowning, magic and playing musical instruments, it's easy to imagine what a fun home life the two kids are getting!

He also now plays in a band called The Haploids, who make music for kids "that parents won't hate".

Dylan Lewis on I'm A Celebrity...

Dylan has gained a lot of additional fans for himself since the start of his journey on I'm A Celebrity... Get Me Out Of Here!

Tipping bets are still all for the radio host to take out the competition. And considering the amazing charity he is playing for, what a full circle moment it would be to see Dylan be able to help Lifeline assist those in need across the country.

We're rooting for him!

Reply
Upvote
I don't know Dylan . But I do know what it feels like to take your own life .  Just keep looking at the photos of your brother cherish the memories and have some faith I God if your a believer . I don't like to push religion on anybody