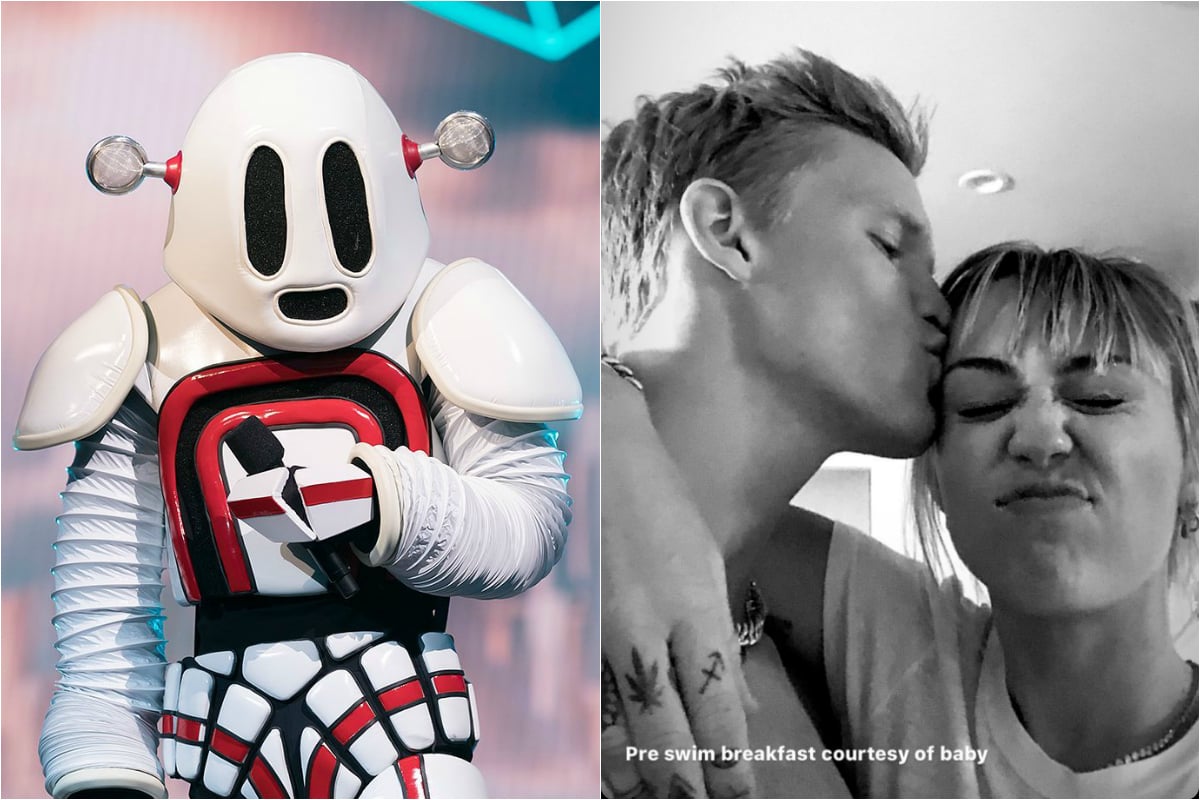 Now, nearly a decade on and after living in Hollywood for a number of years, he is speculated to be one of the celebrities on Channel 10’s The Masked Singer.

He’s the one who pretends to be a robot.

So what has he been up to recently? Well, right now it is confirmed he is dating singer Miley Cyrus. But we’ll get to that. First let me present the evidence that 22-year-old Cody Simpson is the handsome Robot with some quality moves on Channel 10’s new reality TV show.

Is Cody Simpson the Robot on The Masked Singer?

(Almost) definitely. Every single clue matches up and please, allow me to prove it.

Robot Clue: “I was created by the digital age.”

Evidence: Simpson was discovered on YouTube by a Grammy-award winning producer, Sean Campbell.

Robot Clue: “Growing up, I was surrounded by gold.”

Evidence: Simpson grew up on the Gold Coast.

Robot Clue: “I really care about the real world” AND “I’ve always been connected to the water.”

Evidence: He is an ‘Ocean Advocate’ for The United Nations Development Programme.

Robot Clue: “As a young robot, my favourite animal was the butterfly.”

Evidence: Before he was a singer, Simpson was a superstar swimmer and won gold in the under-12 100-metre butterfly final at the Queensland Swimming Championships.

Robot Clue: "I headed East like a moth to a flame, but I soon realised others were controlling my program. I felt like such a clone! So I short-circuited the production line and I'm now very much my own robot."

Evidence: Simpson was quick to move to America after gaining fame in Australia. But in 2014, Simpson left his record-label, Atlantic Records, due to creative differences. At the time he said, "I'm an independent artist... working on my first true solo album".

What has Cody Simpson been doing recently?

SO. Now we've established he is irrefutably the man dancing and singing in a robot costume on The Masked Singer, what exactly has he been doing recently?

As mentioned, he went down the more indie route with his music, and has pursued songwriting as well. Recently, he formed the band "Tide" which released their debut song, "Waiting For the Tide" under his personal record label The Coast House Records.

Last year, he also dabbled in acting as he played Dmitry in Anastasia on Broadway.

And from 2013 until 2015, he was in a highly-publicised, long-term relationship with supermodel Gigi Hadid.

He told DuJour following their split: "I love my ex-girlfriend, I always will. It was an amicable, mutual decision, and we still talk every now and then, but the highly publicised thing made me uncomfortable.

"Going out to dinner and there being all this paparazzi and stuff… as soon as we split I had the realisation that I was straying away from who I was as a whole person. I want to keep it low key, and focus on my music."

Now, Simpson is rumoured to be dating singer and actress Miley Cyrus, who recently split from her husband, Australian actor Liam Hemsworth.

"Can a girl not get a f***ing acai bowl and a morning make out session in peace ???" Cyrus, 26, posted to her Instagram stories alongside the video of her kissing 22-year-old Simpson.

The Aussie singer posted to his Instagram Stories on Sunday, with a selfie of him and Cyrus, writing: "Pre swim breakfast courtesy of baby."

We'll have to wait till Robot is unmasked to confirm beyond doubt that Simpson is on The Masked Singer, but it would appear the singer-songwriter is now wanting to reconnect with his Australian fans.

... Also, if Cody Simpson is not Robot on The Masked Singer you'll... never hear from me again.

And tonight he sang Jolene which has also been covered by Miley Cyrus as Dolly Parton is her Godmother. I think it is him too!!!