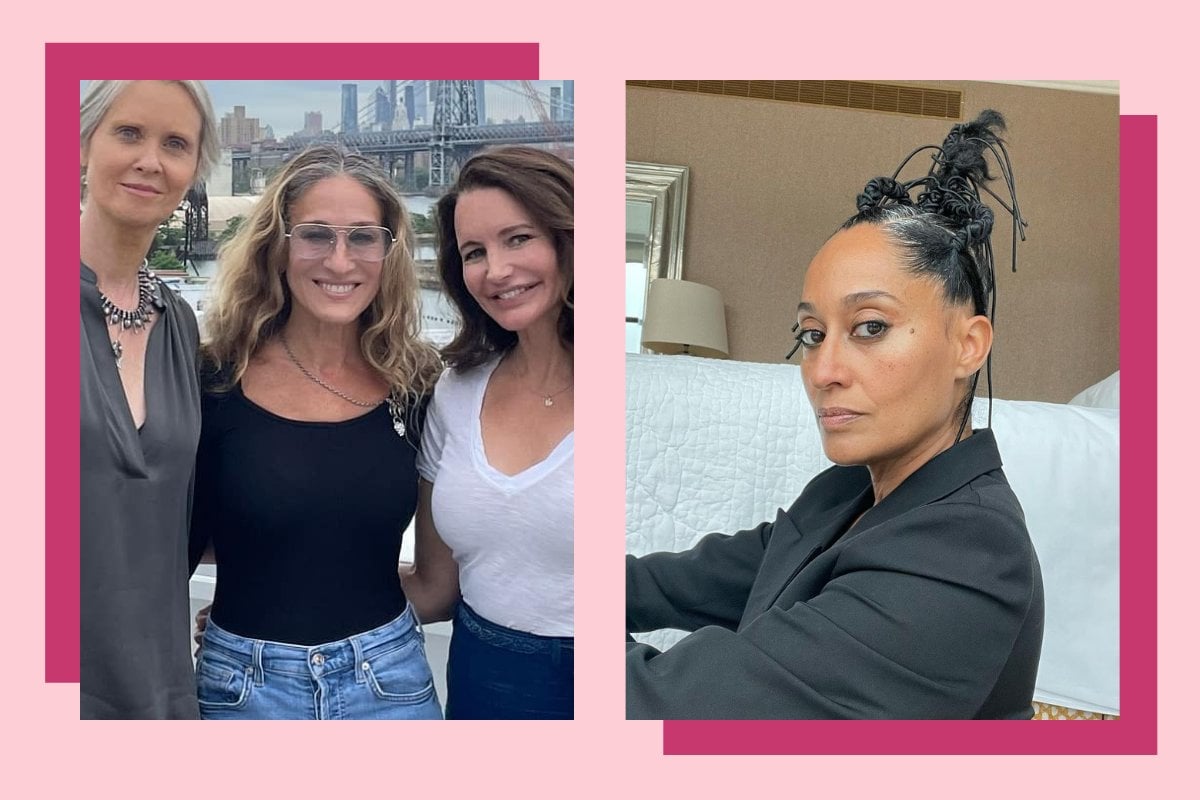 More and more celebrities are embracing their natural hair – whether that be their real colour, curls or greys.

Needless to say, we love to see it.

While grey hair is completely acceptable for men in the public eye (hello, 'silver foxes'), women with greys are still spoken about quite differently in the media.

With the hopes to normalise it (because that's what it is – normal), we've rounded up 10 celebrities who are choosing to embrace their greys – whether that's all-over or a few strands – and what they've said about it.

In between filming the Sex and the City reboot, And Just Like That, Sarah Jessica Parker was spotted on set, make-up free with her grey hair tied back in a ponytail.

After the paparazzi photos were published (we won't share them here), Parker received criticism over her appearance, with publications reporting that the actor looked "old".

Speaking to American Vogue for her December cover story, SJP discussed the double standard that still exists between men, women, and aging.

"There’s so much misogynist chatter in response to us that would never. Happen. About. A. Man," Parker told the publication.

The Sex and The City star also addressed how critical people are on social media about women looking older.

"Everyone has something to say. 'She has too many wrinkles, she doesn't have enough wrinkles.' It almost feels as if people don't want us to be perfectly okay with where we are, as if they almost enjoy us being pained by who we are today, whether we choose to age naturally and not look perfect, or whether you do something if that makes you feel better," she said.

"I know what I look like. I have no choice. What am I going to do about it? Stop aging? Disappear?" 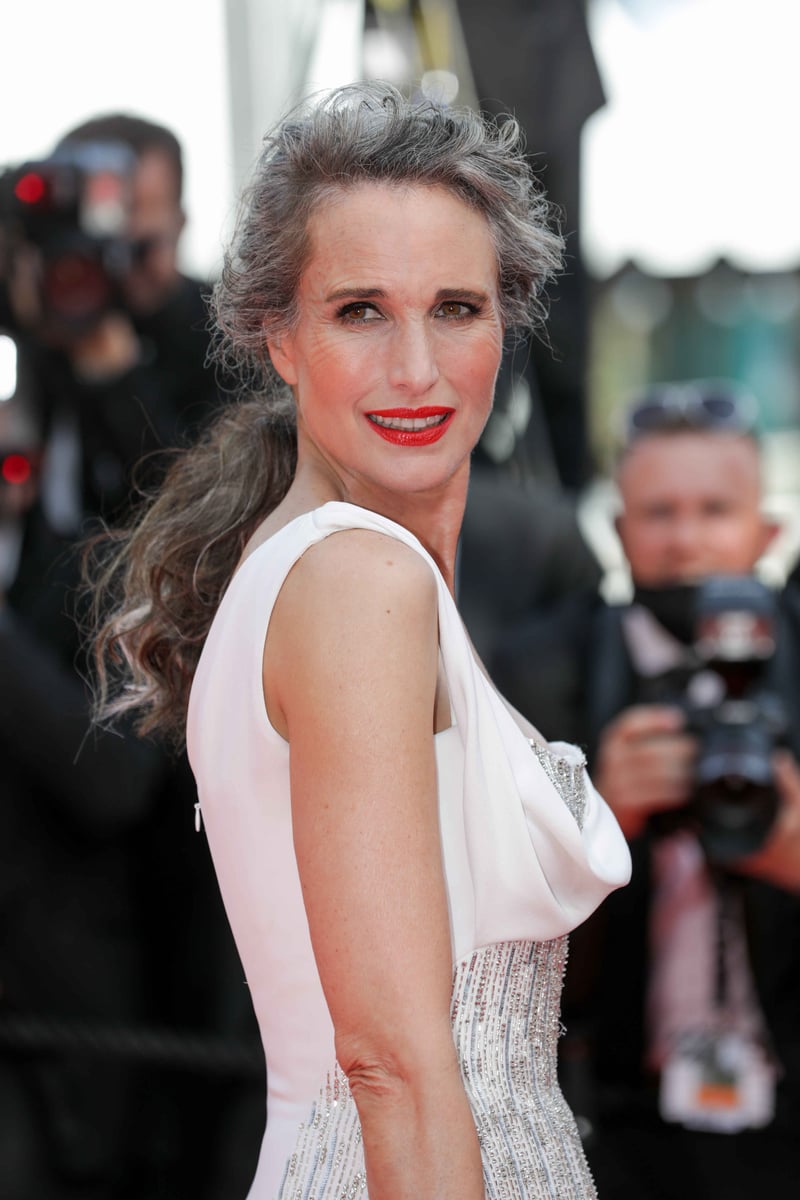 While it was months earlier during quarantine that her roots grew out, it was when she went back to work that she decided to keep them.

"During coronavirus my roots grew out, and I had to make a decision quickly before I went to do a movie," she wrote on Instagram.

"I kept asking permission from everyone and asking everybody what they felt and not really getting clear answers so I decided to do what I felt was right," she continued.

"I went natural and embraced my true colour. I want to be proud of where I am in my life! I don’t want to be ashamed of my age."

Earlier this year, Allison Janney debuted a new 'do for The Drew Barrymore Show: short, pixie cut hair and her natural colour. She told Barrymore it's like "heaven".

"I cannot tell you how amazing it is to feel free – free from hair colour, and hair extensions, and hair tapes, and blah blah blah," the Mom actress said during the interview.

While Salma Hayek isn't entirely grey (she only has a few strands), she's chosen to embrace them.

Author, director and actress Justine Bateman is embracing everything that comes with aging, including her greys.

Speaking to Glamour magazine about it, she said: "If I was fixated on the fact that my face looks like it’s 55, I would be completely screwing myself out of enjoying this moment in my life. It’s happening whether I’m happy with the way my face looks or not.

"So what’s my attitude going to be? Am I going to spend time obsessing on the fact that my face is naturally aging? It’s ridiculous. No. I’m going to have a good f**king time!"

During isolation last year, Teri Hatcher let her greys grow. While the Desperate Housewives star eventually dyed them (she's an ambassador for box dye brand, Madison Reed), it was pretty cool to see her chatting to her Instagram followers, showing off her natural hair.

Jamie Lee Curtis has been rocking grey hair for years now. Speaking to Everyday Health (according to Insider), she quickly made the decision one day at the hairdresser.

"The epiphany came when I was sitting in a hair salon thinking, 'What the eff am I doing putting a chemical on my head that burns?'" she said.

Well, that only made us love her more.

Tracee Ellis Ross is learning to embrace all of her natural hair – greys included. Speaking to Allure in October 2020, the black-ish actress shared how she feels about them.

"As I have grown and matured, my texture has evolved. My hair is now turning grey (evidence of my life and my years). And while the grey has changed my texture and the dye I use to cover it has loosened my pattern, I finally know my hair inside and out," she told the publication.

"I've always said that my journey to self-acceptance can be chronicled through my journey with my hair," she added.

"Taking the time to accept, understand and love my hair mirrors the relationship I have with myself. I have grown to love and appreciate my hair in all of its seasons. Because hair love IS self love."

Lily Allen is another celebrity who's slowly coming to love her greys. In a June 2020 Instagram post, she shared a fabulous selfie with her salt and pepper hair. However, Allen has since returned to her jet black 'do.

Diane Keaton debuted a full head of greys at the 2014 Golden Globes and has been rocking it ever since. Icon.

reannon a year ago

Reply
Upvote
I stopped dying my hair in December 2018 at age 38. I was so sick of covering the grey, something I had been doing since I was 23! I’m pretty heavily grey now & I love it so much. It is pretty confronting to be told I look better as a full brunette & that I look younger with dark hair but I’m happier not worrying about my hair colour. Sometimes I feel bad for my youngest kids, who are 7 & 8, because their friends have asked if I’m their nana (!!!) but I like when they point out that my hair is “so white now!” that I can just say “ yeah, that’s just how my hair grows now” & they don’t care at all.
News
General
Opinion
True Crime
Politics
Sport
Explainer
Entertainment
Celebrity
Reality TV
Movies
TV
Books
Rogue
Royal
Lifestyle
Beauty
Fashion
Weddings
Home
Wellness
Health
Fitness
Travel
Food
Family
Before The Bump
Pregnancy
Baby
Kids
Teens
School
Parent Opinion
Work & Money
Money
Finance
Career
Lady Startup
Relationships
Sex
Dating
Separation
Friendship
Family
Real Life
Couples