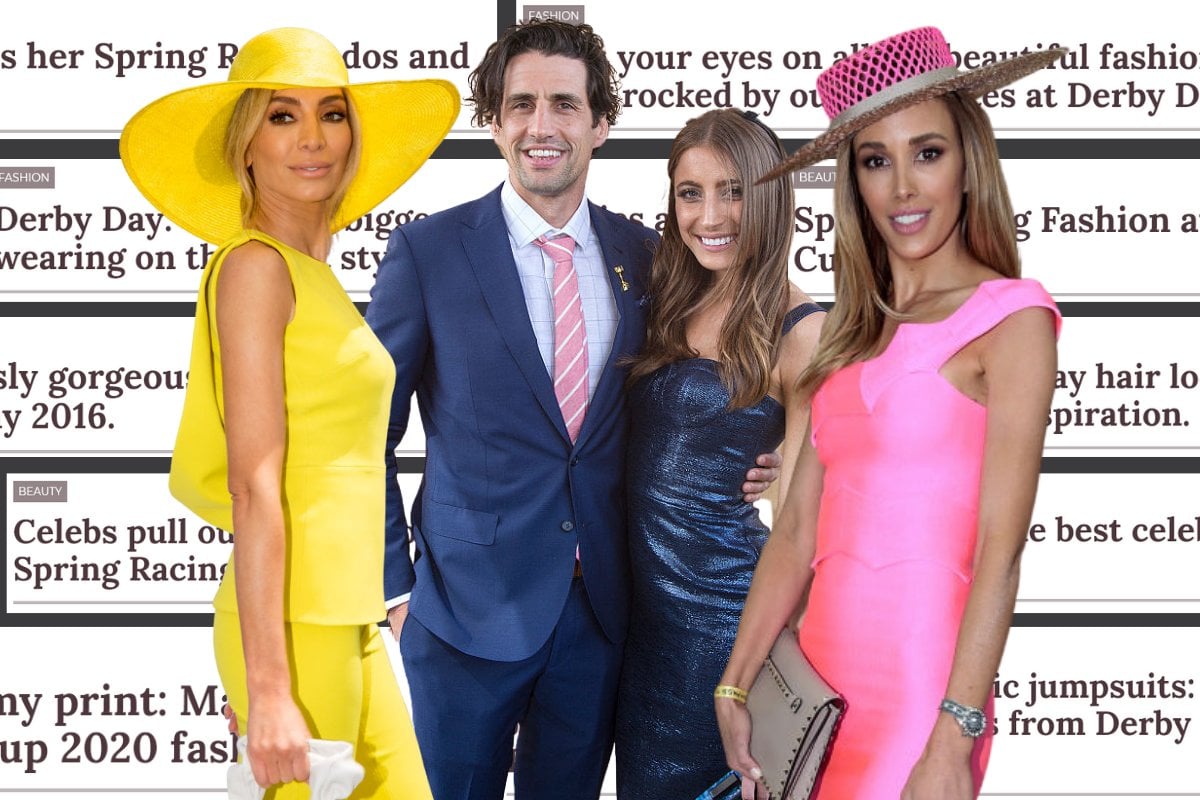 Last Saturday used to be one of the busiest days of our year.

Working in digital media, the landmarks of the cultural calendar whip around fast. What's on the schedule for Mother's Day? Valentine's? The Emmys? The ARIAs?

It's the Saturday before Melbourne Cup. The first big do of the whole Spring Racing Carnival.

Here at Mamamia, we used to staff-up for Derby Day. We knew that there would be fashion - a lot of it, in regulation black and white - photo galleries of sculptural hats with razor-sharp quills, a rule-breaker turning up in red and an international celebrity flown in to look bemused as their heels sank slowly into fragrant mud.

There would be reality stars, brekkie TV presenters and Andy Lee. Influencers, politicians, models and soap stars. They were in Melbourne, they were on Instagram, it was the beginning of a week of #glamsquad posts, sore feet and lots and lots of clicks.

This past Saturday? Well, we forgot it was happening. And when we remembered, we didn't really feel like covering it.

Yes, there's COVID. No-one is flying into Victoria for the racing carnival this year. Our closed state borders are fading with age, soon to be smudged out all together, but not yet. We're still living within our own firmly drawn boundaries, and so it was locals-only in the 5,500-strong, fully-vaxxed racing crowd.

But it's not only the virus that's kept Flemington largely off our feeds until today. Maybe even today.

It's the fundamental shift, barrelling along for a few years now, that has meant what was once celebrity Christmas - a week of limos, free marquee champagne, a million photo opportunities and bagfuls of sponsors' loot - is now very much on the nose.

On Saturday, few of the Melburnian regulars were at the track. No Bec Judd, no Nadia Bartel, no Sam and Snez, no... Andy Lee.

The social feeds of the usual suspects were noticeably quiet. The buzz around today is muted. No hipster hotel is going to host a #cuplunch for wagging office workers who no longer go to offices and no longer feel comfortable blinding a critical eye to the day's $650m gambling tally with several bottles of cheap fizz.

If you sometimes quietly despair that the world is getting worse and nothing is changing, consider the shift that's happened over the last five years around the Race That Stops A Nation.

In 2014, two horses died running the Cup. The criticism, bubbling away at a low level, began to hit critical mass. Since then, every year, media outlets including this one pre-prepare a story about a horse death, leaving a space for [insert horse name here]. And, like clockwork, it always runs.

Ever since there's been a louder, and very valid, stoush between horse people and non-horse people. Punters and puritans. Vegans and the Victoria Racing Club.

It's become a generational signifier of difference. And the Beautiful People have had to pick a side. Weirdly, Taylor Swift helped this along.

Two long years ago, Swift was slated to play at The Cup as part of a promotional visit to Australia. It was a considered strategy by the VRC to attract a younger crowd to the racing carnival, because their loyal fanbase is ageing up, fast.

But when the gig was announced, the judgement for Swift was immediate.

It was a wave of furious criticism from a generation who expect their icons to act with integrity, to love animals and eschew bad habits, to care where they perform and what it stands for.

Swift cancelled, citing a scheduling conflict. The year after, COVID came, and in 2021, there will be no big American stars quietly cursing next to the slippery ice sculptures in the fanciest marquees. Just a close eye on which of the local ones will risk it.

Priorities have shifted, again. After 18 months of being asked to sacrifice for the greater good, we are highly attuned to the privileged who might choose a party over principles, and everyone is ready to pounce.

That doesn't mean the famous people can't go to the Races. It just means it had better be on brand for them to be there.

A peak example is that Sam Armytage was at the Derby on Saturday, but since she's married a horse man and "gone country" her attendance holds no whiff of hypocrisy.

Kate Waterhouse, although likely stranded in Sydney, has horses in her blood. A nup from her would be a family betrayal.

But all of this presents a conundrum for the media. Last Saturday used to be one of our busiest days. It was possible, for a while, to separate frocks and gossip from the demonstrations and the whips. But not anymore. We live in increasingly all-or-nothing times.

The horse people will be at their race. The nuppers will be protesting. And the influencers who used to spend a week perfecting outfits and angles will be deciding whether their follower-count can stand a brush with a tainted, ageing icon.

What was once the party of the year has become a slightly shameful, no-social secret.

Nup, don't tell anyone I was at the Cup.

Reply
Upvote
2 upvotes
Did it occur to you that many of those regular faces who are currently MIA weren't invited because they're not vaccinated?
S
sarat023 7 months ago