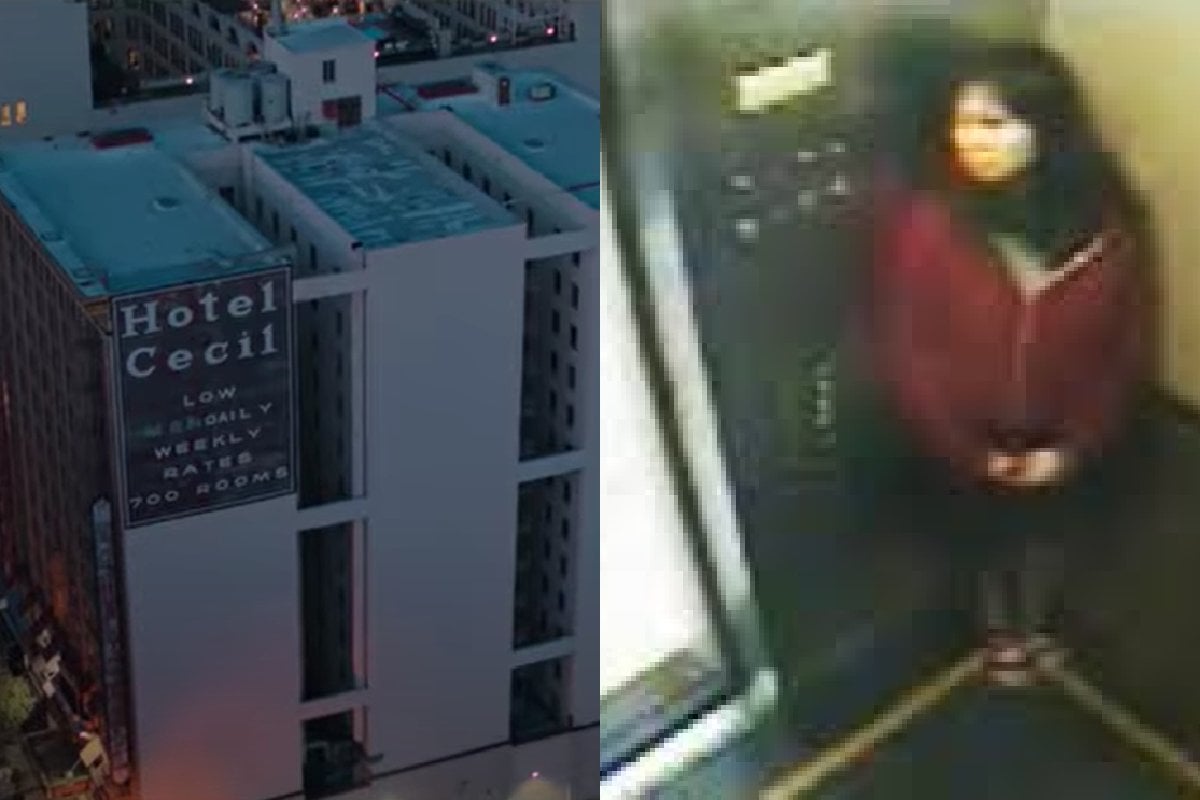 Stepping into the lobby of the Cecil Hotel is like stepping back in time into old school Hollywood.

With its Doric columns, stained glass windows and marble floors, you can imagine Hollywood starlets and big time movie producers sipping on martinis in the hotel bar.

And they did, for a short time.

Now the demise of the once iconic hotel and its grisly past is being explored in a new Netflix docuseries called Crime Scene: The Vanishing at the Cecil Hotel.

Watch the trailer for Netflix's Crime Scene: The Vanishing at the Cecil Hotel. Post continues below.

The 700-room hotel was built in downtown LA in the 1920s and was marketed as a luxury hotel for businessmen visiting the city.

For a few years, it was a favourite among the Hollywood set, especially because it was the first hotel in the city to welcome Alcoholics Anonymous meetings.

Then the Great Depression hit and LA locals down on their luck set up camp in Skid Row, the city's most notorious slum, which surrounded the hotel. Residents who couldn't afford the hotel's room rate slept on the pavement outside and in the nearby bushes.

As the city's homelessness and crime rates increased, the hotel became synonymous with poverty and accidentally became the poster child for the darker side of Tinsel Town. Its Hollywood shine was quickly replaced with grime.

The hotel has since been dubbed the 'Hotel Death' and it was the inspiration behind the fifth season of American Horror Story.

In 1947, Elizabeth Short was reportedly seen in the Cecil Hotel bar. A few days later, her body was found in the middle of a nearby grassy lot. It had been cut in half, and she had cuts on her face from the corners of her mouth to the bottom of her ears. She was quickly dubbed 'The Black Dahlia' by the media.

In 1964, a hotel worker found the body of "Pigeon Goldie" Osgood in one of the hotel's rooms. She had been raped, beaten and stabbed to death. Her murder remains unsolved.

Between 1964 and 1974, the 'Skid Row Slasher' Vaughn Greenwood killed 11 people who were sleeping on the streets surrounding the hotel. He would scatter rings of salt around his victims and leave cups of blood at the scene.

In 1985, Richard Ramirez, the serial killer who later become known as 'The Night Stalker', moved into the top floor of the hotel. Ramirez killed a number of people while lodging at the hotel and would dump his bloody clothes in the hotel's dumpsters.

Six years later, Austrian serial killer Jack Unterweger checked into the hotel to visit the place which was once the home of Ramirez, one of his heroes and greatest influences.

Over the years, many travellers and locals would book into the hotel to end their own lives. In the trailer for the docuseries, one of the hotel's previous managers asks, "Is there a room here that, maybe, somebody hasn't died in?"

But probably the most notorious death at the Cecil Hotel is that of Elisa Lam. The upcoming Netflix series will concentrate on the mystery surrounding her case.

The 21-year-old was on a solo holiday when she died. The University of British Columbia student was on her way to Santa Cruz, California, when she checked into the Cecil Hotel on January 28, 2013.

She was booked in for a three-night stay and, according to court documents, was initially assigned a shared room but roommate complaints about her "certain odd behaviour" saw her moved to one of her own.

Three weeks later, on February 19, 2013, maintenance worker Santiago Lopez took the lift to the 15th floor of the hotel.

There were problems with the water supply. Complaints had been coming through to reception for days: low pressure, a dark colour, even a strange smell seeping from some of the taps.

From the 15th floor, Lopez took the stairs to the roof, where he disabled the access alarm, walked across to a platform, and then climbed a ladder to the top of the downtown building's three metre-tall water tanks. One of the hatches was open. He peered inside.

There, he saw the body of an Asian woman face up in the water, naked, with her clothes floating beside her.

The body was soon identified as Elisa Lam.

It captures Elisa entering the lift at the Cecil Hotel on February 1, wearing the same clothes later found alongside her body in the water tank.

She presses buttons for several floors, then hides in the corner. She then steps one foot back into the hallway and glances, quickly, in each direction.

She ducks in and out of the lift several times, moving in large, deliberate steps. At one point she moves only in straight lines: stepping directly sideways, or forward and backwards.

When she moves into the hallway the final time, she makes strange, sweeping gestures with her hands and wrings her fingers. Then she walks away.

The clip, which has been viewed more than 26 million times on YouTube, lasts four minutes. No one else appears in the frame.

The official cause of Elisa's death was determined to be accidental drowning. According to an autopsy report, there were no obvious traces of alcohol or illicit drugs in her system, and she had no history of suicidal ideation and had never attempted to take her own life.

How and why she ended up in the water tank, though, remains unknown. The LAPD investigation proved inconclusive.

The door to the roof was alarmed, but no employees recalled it being activated in the time between her disappearance and the discovery of her body. It's been speculated that she may have accessed the roof through a window that led onto one of the building's three fire escape stairways — each is clearly marked for emergency use only.

The case remains popular with internet sleuths, who have pored over court documents, coronial findings and the bizarre CCTV footage in the search for an explanation.

LISTEN: The vanishing of Vivienne Cameron. Post continues below.

The most persistent theory is related to her mental health. Elisa lived with depression and bipolar disorder, for which she took several prescribed medications. Bipolar disorder was listed as a contributing factor in the autopsy report, and some have speculated that she may have been in the grips of a manic episode at the time of her death. Though mania presents in a variety of ways, extreme episodes can trigger psychosis and hallucinations.

Others believe Elisa may have been lured onto the roof by another guest or staff member, and some even believe there may have been supernatural forces at play.

In 2015, Elisa's family filed a negligence suit against the Cecil Hotel, alleging the water tank should have been better secured to prevent such an accident occurring. The suit was dismissed.

Now, eight years on from her death, we are no closer to finding out what really happened to Elisa Lam.

Crime Scene: The Vanishing at the Cecil Hotel drops on Netflix on February 10.