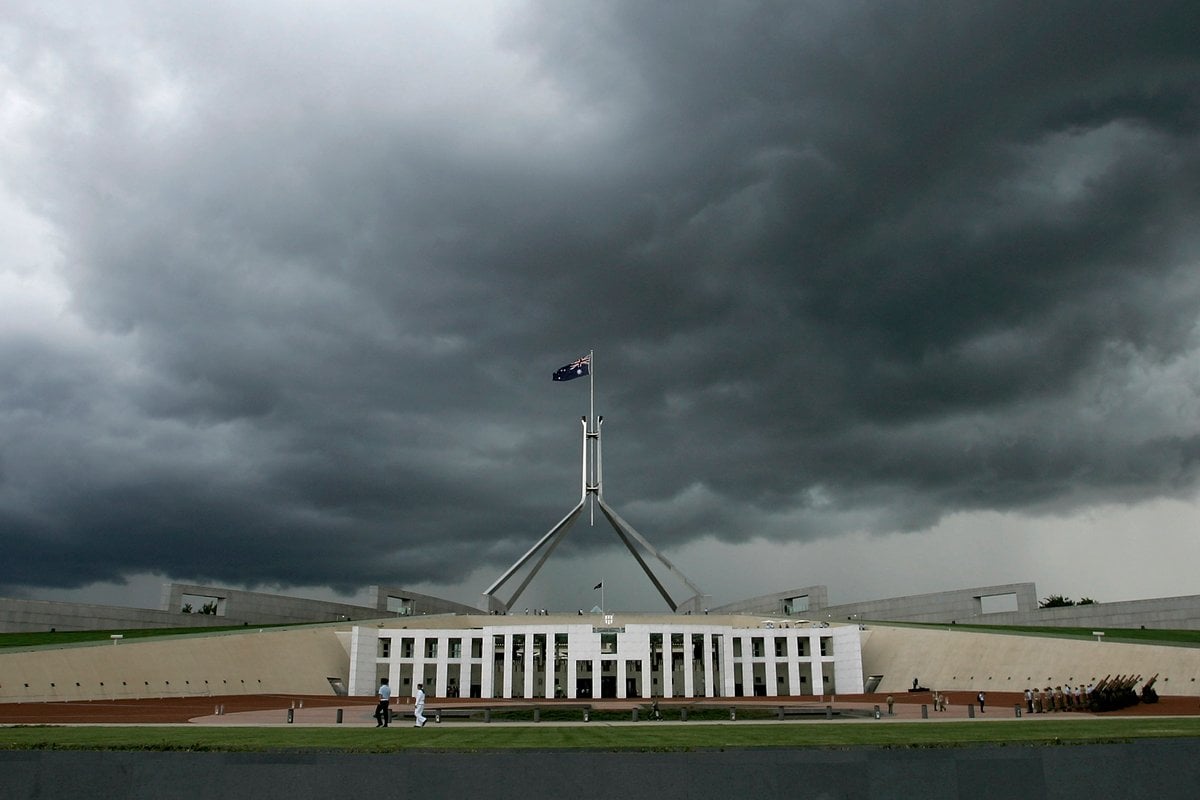 All eyes are on our nation's capital as more allegations come to light, a month after Brittany Higgins alleged she was raped by a former colleague in 2019.

On Monday evening, a Four Corners investigation uncovered how the events unfolded on the night of Brittany Higgins alleged rape in March 2019.

During the program, a Parliament security guard spoke about the night she found Higgins in then-Defence Industry Minister Linda Reynolds' office, and claimed that there was no security breach by either party - despite that being the reason for the alleged perpetrator having his contract terminated.

Hours earlier, Ten News reported allegations about Parliament's 'prayer room' being used for sex and alleged that a Liberal staffer shared video of himself performing a lewd act on the desk of a female MP in Parliament House.

Here's all allegations coming out of Parliament House right now.

Parliament security guard who found Brittany Higgins on the night of her alleged rape speaks out.

A Parliament House security guard has given her version of events about the night she found Brittany Higgins in then-Defence Industry Minister Linda Reynolds' office after her alleged rape.

Nikola Anderson, who has worked as a Parliament House security guard for 12 years, told Four Corners that she was "the ministerial patrol" that night on March 22, 2019.

"Basically, my duties for the night were to patrol the ministerial wing, make sure that the doors were all locked and that there was no one in the suites, so that I could report back to the control room," she explained.

Listen to The Quicky, where host Claire Murphy discusses why Canberra is not the only workplace with a "women problem". Post continues after podcast.

According to the ABC, CCTV from the night shows that Higgins and a colleague arrived at Parliament House at 1:50am. Anderson was on duty when they arrived.

"It kind of took us by surprise because they walked in at two in the morning, and it was a Friday night ... well, Friday night, Saturday morning," she told Four Corners.

"They basically walked in together. She was wearing a white cocktail dress. I'd noticed that she had grass stains down one side of her body on this pure white dress. He seemed to be quite dressed up as well. And it was just strange to us that they were there at that time of night together, wanting to go into the office."

According to Anderson, neither Higgins nor the colleague had their parliamentary passes, so she asked for ID and she looked them up on the system. Anderson later noticed Higgins was "intoxicated" after she walked through the metal detector.

"As she's gone to put her shoes back on after she's walked through and cleared herself, she couldn't get them on," said Anderson.

"That's how I realised how intoxicated this girl was because she just could not get her shoes on for the life of her."

According to the ABC, CCTV shows the man left Parliament House at 2:35am.

At 3:00am, Anderson went to relieve a colleague to go on their meal break, which is when she said they told her about a conversation they had with the male.

"My colleague had tried to make conversation with him and he seemed to be in a hurry," she said.

"That was when my colleague and I decided that we needed to push it up the chain and notify our night shift team leader that there might've been something a bit strange going on."

Anderson said she was later asked to do a welfare check on Higgins.

"As I approached Minister Reynold's office, I opened the door and announced myself. So, yelling, 'Security. Hello. Security, security'… just so that she was aware that I was there," she said. "I got no response whatsoever."

"As I've opened the door, I've noticed that the female was lying on her back, completely naked, on the lounge that was adjacent to the door, for which I've gone, 'Oh'," she told Four Corners.

"The sound of the door or the breeze of the door opening has then made the female open her eyes, look at me. And then she's rolled over onto her side.

"So, therefore, my [take] on it was she's conscious. She's breathing. She doesn't look like she's in distress. She's just sleeping off her night. And with that, I shut the door, and I exited the room."

"I made sure her dignity was intact by shutting this door... I was trying to do the right thing by keeping her dignity intact."

When Anderson finished her shift at 7:00am Higgins still hadn't left the office. A second female guard was then sent to do another welfare check.

Higgins later left Parliament House at 10:00am and took an Uber home.

Brittany Higgins' alleged perpetrator had his contract terminated due to a 'security breach'.

Since Brittany Higgins' came forward during her interview on The Project, it has been made known that her alleged perpetrator had his contract terminated shortly after the event due to a 'security breach'.

The details of this breach were not explained during Prime Minister Scott Morrison's press conference at the time of allegation, despite him being questioned on the topic.

Now in the Four Corners episode, Anderson, the security guard on duty the night of the alleged rape has claimed that there was no security breach by either party. They were both pass holding individuals and therefore did not enter an area they didn't have access to.

The finance department at Parliament House may have been contacted to discuss how a sexual assault claim would be handled.

Again in the Four Corners report, it has been alleged that contact was made by individuals at Parliament House to the finance department to enquire about how an alleged sexual assault claim would be handled.

Fiona Brown, a now-senior member of Scott Morrison's staff and Linda Reynolds' former chief-of-staff, had sought formal written advice from the department the week before Reynolds conducted a meeting with Higgins in her office, the same room where the alleged rape took place, the report said.

Staffer accused of performing a 'lewd sex act' in a female MP's office has been sacked.

At least one coalition staffer allegedly involved in a Facebook group which shared images of themselves performing sex acts in Parliament House has been sacked.

On Monday, Ten News reported that a small group of staffers had set up a Facebook Messenger group which allowed them to share images and video of sex acts.

An unidentified whistleblower said at times the acts had been performed on the desks of female MPs.

Finance Minister Simon Birmingham called for the immediate sacking of coalition staffers on Monday evening, telling an estimates hearing he was "disgusted and appalled" by the claims.

"It shows a complete disregard for all our parliamentary democracy stands for," he said.

"It also demonstrates an enormous disrespect for the employing member or senator in relation to those staff and those officers.

"It equally shows a complete contempt for the Australian taxpayers who have paid the wages for such staff and, in my opinion, any individuals who engaged in such activity ought to prepare to pack their bags and leave the building for good."

"I want to see this sort of behaviour stamped out," he said.

The Parliament House 'Prayer Room' is supposedly used for staffers to have sex.

"I can probably say there is very little meditation or prayer going on in that room," the man told Ten News, on the condition of anonymity.

He also alleged that sex workers have been brought into the building "for the pleasure of Coalition MPs".

"Everyone has a right to feel safe at work. The reports aired tonight are disgusting and sickening," Morrison said, as reported by Nine.

"It's not good enough, and is totally unacceptable. The people who come to work in this building are better than this.

"The actions of these individuals show a staggering disrespect for the people who work in Parliament, and for the ideals the Parliament is supposed to represent."

He urged anybody with further information to come forward.

"I will have more to say on this and the cultural issues we confront as a Parliament in coming days."

Reply
Upvote
I am doubtful that poor behaviour is a recent phenomena in Parliament House.   I remember the wife of a former minister of PM Bob Hawke,  talking about the time she had sex with her husband on his ministerial desk.   Perhaps politicians should stop hiring political staffers straight from University and instead employ aides with a bit more maturity and life experience?   Ban all relationships between employees, ban alcohol and any allegation  of sexual assault is reported immediately to the police and not left in the hands of politicians to cover up or bury.

Reply
Upvote
1 upvotes
@guest2 the staffers are clearly not the issue here, this is coming from the top down. And they don't pay enough to hire anyone except 23 year olds.
Besides, your average 23 year old these days knows much, much more about acceptable behaviour than the men in their 60s. If I had to be alone in a room with one I'd take the 23 year old any day.

Reply
Upvote
I'm not shocked at all. Boys clubs have always behaved like this. It's why so many women (and other men) hate boys clubs and want change.
Aren't we all just a little bit sick of this yet? The whole lot of them need turfing and we need to start again with a whole new system. A transparent one, with proper representation for all Australians, not these elite white men who do as they please, turn a blind eye for as long as they possibly can and, then, are dragged kicking and screaming into doing the right thing.
Sco Mo can go fly a kite, his crocodile tears do not convince me that he doesn't know what goes on in that place. And, if he really wants to show he is listening, stand down Porter and conduct a proper inquiry into his behaviour.

Reply
Upvote
@laura__palmer i think your suggestion for change might have described what a democratic government is supposed to look like.