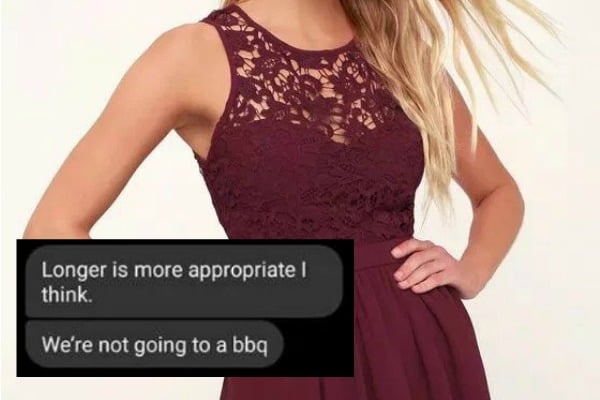 A bride and her bridesmaid have started a debate about the appropriate length of bridesmaid dresses after sharing a disagreement on social media.

The anonymous bride from Florida took to a wedding shaming page on Facebook to slam one of her close friends for being “snobby” after turning her nose up at the bride’s suggestions of maroon dresses that come just above the knee.

After seeing the photos, the bridesmaid quipped back that the dresses were more appropriate for a barbecue than a wedding.

"Can I shame my bridesmaid for dissing these dress options and being snobby about it?

"The wedding is at a park in Florida in early October, so pretty casual, and she wants everyone to wear long dresses because it's 'more wedding appropriate'," she wrote alongside images of her suggested dresses.

Not long after, the bridesmaid in question, who was also a member of the Facebook group, hit back on the post with screenshots of their texts to show her side of the story.

"So I'm here to shame myself as my best friend's bridesmaid from hell because I've been on her case about what kind of dresses she wants us to wear for her wedding," she wrote.

"She's told me she doesn't care as long as we're comfortable and within her colour scheme - last night I asked for picture references of dresses to go off of."

After looking at the images provided, the bridesmaid texted back that she didn't think the above-the-knee suggestions were entirely 'wedding appropriate'.

The bride reminded her friend the decision was "not up to you".

By the end of the exchange, the pair seemed to agree that whatever the bride wanted was acceptable.

"I'll probably just stick to one of the ones you sent," the bridesmaid text the bride. "I'll send you a picture and buy it."

"Alright, that sounds good. Love you," the bride replied.

Other members of the Facebook group were quick to turn the shaming around, mostly on the bride.

Group members agreed with the bridesmaid that the dresses were too casual for a wedding and many believed a difference in opinion was not worth the bride's attempt at public shaming, especially because she knew her bridesmaid was also part of the group and would be able to see it.

"You literally asked for her opinion and then got mad and shamed her on a group for giving her opinion," one person responded.

"Imagine putting your own friend and bridesmaid on blast in front of thousands of people WHERE SHE CAN SEE IT," wrote another.

What do you think of the suggested bridesmaid dresses? Let us know in a comment.

I work in the wedding industry. Lots of people use shorter dresses for bridesmaid dresses, especially in the summer. There are also cute shorter (usually t-length) wedding dresses that are popular.

But the casualness of the dress is irrelevant. The one who was out of line was the bride. If she didn't want an opinion, she shouldn't have asked. She was way out of line to shame her. Her friend did nothing wrong.

It is what ever the bride wants and the short dresses are cute for a wedding. I don't see shaming the bridesmaid when the bride was asking for opinions and she just gave hers. The text didn't sound that bad to me. Must be a case of wedding nerves.