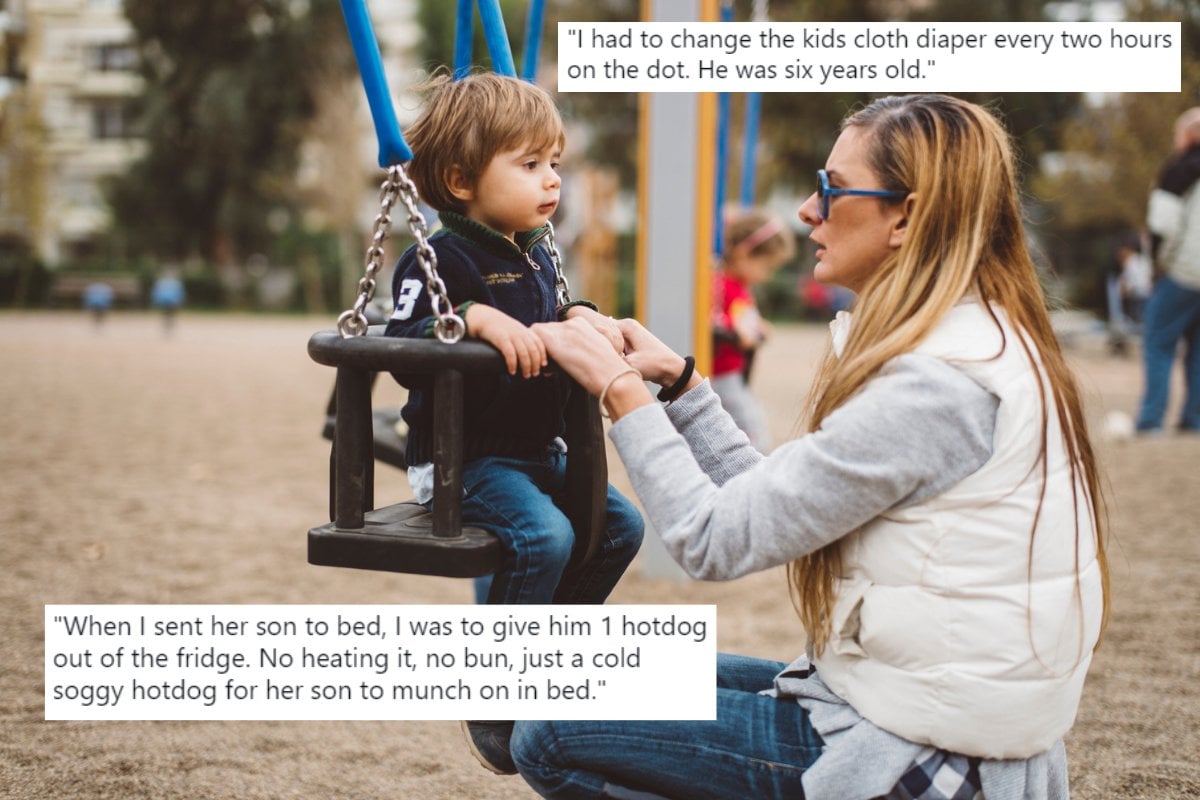 There’s no denying that being a nanny or a babysitter is no easy feat.

Regardless of how fun it can be to babysit, it still takes a lot of energy to constantly watch and look after children that aren’t yours.

After all, the hardest part of babysitting is enforcing the parents rules.

From bed times to snack restrictions, many parents set a number of standard guidelines for their babysitter or nanny.

But while many of these guidelines are pretty common, every once in a while an unfortunate babysitter is met with some seriously strange guidelines and rules to follow.

Babysitters and nannies shared the weirdest rules parents have asked them to follow in a hilarious Reddit thread. So we decided to grab our favourites, and ask the Mamamia community what they have come up against.

"I was told that the only thing she specifically wasn’t allowed to do was eat a bowl of sugar."

"I had to change the kid's cloth diaper every two hours on the dot. He was six years old. I assumed it was for some sort of disability or something, but no. His parents just didn’t want to potty train him, and the kid was content with being babied."

"They asked me to drive their three-year-old twins around in my personal vehicle for two-and-a-half hours because 'that’s the only way they can nap'. I simply put the kids in their bed, closed the door, and they were asleep in 15 minutes."

"It was a hippy family. The two-year-old had no bedtime and no rules. 'She can eat what she wants, no bedtime, and if she falls asleep, leave her wherever she crashed.' The parents came home at 2.30am to a toddler eating chocolate cake on the couch with her preferred American Pickers on TV. That’s fine apparently."

"I had to put the kids to sleep with the CD player going. But that wasn't the weird part.

"It was a recording of their parents basically going, 'Molly, you are wonderful. You are a star. You're going to shine bright.' That isn't super weird... but it was several hours long, and apparently they listened to it every night."

"I was told to give him warm milk in a baby bottle right after every dinner. He was a fully functional 10-year-old boy."

"I babysat for a family that had three boys, including one who was a newborn.

"I was never to feed the baby by holding it next to me, but I was to put it on my legs and make eye contact with him at all times. I wasn’t allowed to cuddle him either. I was never to let the older boys lose any game we were playing. I quit after a month."

"Their three-year-old daughter HAD to watch this VHS tape of a live Fleetwood Mac concert every night before bed. She didn’t love it. She always wanted to watch Land Before Time instead. But it was always on the note left for me."

"The mother asked me to stop by the house to meet her two-year-old son a week before I was supposed to babysit him for the first time.

"I pulled up to the house and saw that the young boy was standing at the glass front door with a t-shirt on and nothing else.

"I went in and I must have given the child a strange look because the mum started to explain that her son doesn't like to wear pants so they let him run around pants-less with no diaper on, even though he isn't potty trained.

"I told her that this made me uncomfortable and asked if I could put pants on him when I was watching him, and she got upset with me and said they don't like to make their two-year-old son do anything he doesn't like to do which unfortunately means he goes to the bathroom on the floor since he won't wear a diaper and he isn't potty-trained."

"One family was perfectly normal until bedtime. Then I had to give the five-year-old girl a bottle, put her in a diaper, then cuddle with her until she fell asleep. Like I said, everything else about her and the family was normal. But at bedtime I basically had to treat her like an infant."

"I wasn’t allowed to serve her kid food that was heated in the microwave. Also, she NEVER told me this until after I babysat her and berated me for it. How was I supposed to know? Guess I ruined that child. That same lady would give me a list of chores to complete too. How am I supposed to watch your kid AND vacuum your house?"

"A friend of mine was told she couldn't shed any hair on the couch of a couple she was babysitting for."

"I’m a professional nanny and one of the families I worked for had a strict 'no games' rule. Not as in video games, but as in any game that could have a winner and a loser.

"No board games, no tag, nothing. 'Winning and losing leads to hurt feelings' was their explanation. I’d have to stop the girls any time they said something like 'I bet I can get to the end of the driveway faster' and remind them 'Mum and Dad say no competition, remember?'

"Everything had to be perfectly equal or the parents would lose it completely."

"I babysat for this family for the first time ever and the mother was walking me around the house, giving me instructions and showing me around and then stopped at the fridge.

"She explained to me that when I sent her son to bed, I was to give him one hotdog out of the fridge. No heating it, no bun, just a cold soggy hotdog for her son to munch on in bed. Apparently he ate one every night."

"When I was about 15 I was asked by a family in my church to babysit for them. I didn't know them all that well.

"This family had a daughter about a year younger than me, so I figured she wasn't going to be home.

"I found out not only that she was going to be home, but the primary reason I was there wasn't for her two younger sisters, but for her.

"Apparently, she got nightmares, and if she woke up I was supposed to 'hug and kiss' her.

"I was really uncomfortable with it, but I stayed anyway. Luckily she didn't wake up."

What's the weirdest request you've received while babysitting? Let us know in the comments below.

Have to wonder how the six year old in nappies got on at school.