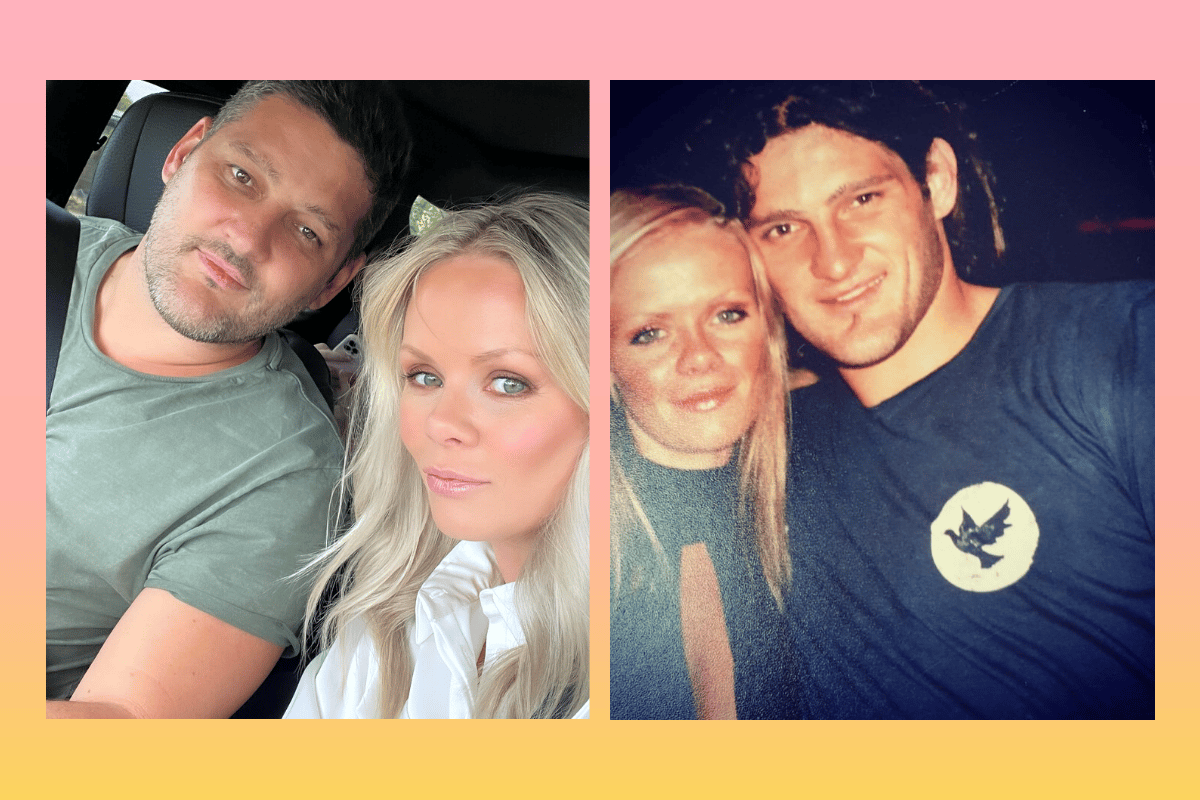 Alex Fevola is so much more than the man she married.

Alex is the founder of the successful beauty brand Runway Room, a photographer, a mum to four daughters and a woman who has had to live some of the darkest moments of her life in the public eye.

She met up-and-coming AFL star Brendan Fevola when she was 25 and a single mum to three-year-old Mia and still grieving the tragic death of her partner Lonny.

"When I met Brendan, I was at dinner with a friend and I had Mia with me,' Alex tells Mia Freedman in an interview for the No Filter podcast.

"Brendan enquired after Mia's dad and I told him straight away that her father had died and that I was a single mum. I think actually Mia was the reason we connected straight away. She loved him and he's very good with children. It was a big tick straight away."

Listen to Alex Fevola's full chat with Mia Freedman on No Filter. Post continues below.

Alex knew nothing much about football at the time but she says she had to learn quickly once they got together. Her attraction to Brendan was instant.

"He was very charismatic and such a joker. He had no shirt on when I first saw him, so that certainly was a bit of it! He was just such a fun person to be around as he lights up a room."

Brendan proposed to Alex within the first 12 months of their relationship and they wed close to a year later in 2005. Becoming known as an AFL 'WAG' (slang term for wife and girlfriend) was not something businesswoman Alex aspired to and she tells Mia that at times she found it insulting.

"People literally assume that everyone who is married to a footballer is one type of person and it's not true.

"Back then, fifteen years ago, to even suggest WAG was an insult would be frowned upon, so I put up with it. And it's not just the term but, it's also everything you do that your husband gets the credit for. People would say, 'oh that's only because she's married to Fev, she'd be nothing without him'.

"Brendan has introduced me to people I would never have met, and he's opened doors for me where I would never had those opportunities. But at the same time, a lot of what I have done has had nothing to do with him."

About 12 months into the relationship, Alex became concerned with Brendan's love of gambling and the fact he never seemed to have any money. Financial issues were overshadowed however, when in December 2006 and shortly after the birth of daughter Leni, the couple separated because of Brendan's affair with model Lara Bingle (now Worthington).

"I was running on adrenalin during that period. I'd come out of such a terribly dark period of my life and I'd finally found happiness and yet I knew deep down, it was just too good to be true. It was really traumatic for me."

She says that what she went through with Lonny's suicide as a young mum, helped her to get through the news of the affair, and she reunited with Brendan in 2007.

"When I felt down or sorry for myself I would think, nothing is as bad as where I've come from. As long as everyone is healthy, I can get over this and move on. That is how I dealt with it."

Alex is clear that the responsibility and fault lay with Brendan and not the woman he had the affair with. She also believes that Brendan faced too much too young as an AFL star which subsequently caused him to require rehab and for their marriage to face many more challenges.

"At the time (of the affair) Brendan was travelling for work. He was unravelling... he wasn't handling the pressure or the public profile. It was all a bit too much. He was a kid from a small county town. He had lived a very quiet life and suddenly he was thrust into this rockstar world. It was a lot for him to deal with.

"It was a very rocky period. It wasn't like we got back together and everything was fabulous. It wasn't. We had a lot of ups and downs. It certainly wasn't a quick and easy fix but we worked through it together and time was a big factor in the healing process."

The couple may have got back together, but Alex says that she felt 'foolish, judged and ashamed' for a time afterwards. In retrospect, she feels that her obligation to bring her family back together didn't allow her time to work through her feelings of resentment. The affair becoming a huge national news story didn't help.

"That was the hardest part of all it. It was as though we were just a joke. It was so heartbreaking to me and my family, my children and yet everyone in the media were just making jokes and making fun of us in general. I understood there'd been a lot of publicity around Brendan...but I felt it was so insensitive. There was little to no sympathy because as I was married to a footballer, it was like what did I expect?"

"I think the other misconception is that people just constantly assumed that you couldn't possibly actually love that footballer. It was like, 'you're only with him because he plays football. You're with him for the money, you're with him for the lifestyle'. And I just thought, 'OK well, first of all, when we were first together, I was supporting him."

"But it was also none of those things. I was in a place in my life where I was ready to fall in love. I had met this great guy who was great with my daughter and I legitimately fell head of heels in love with this man. That he played football didn't come into it until much further down the track. I didn't realise he would end up with such a big profile."

As someone who saw herself as a strong feminist, Alex says she felt ashamed for standing by him but had a strong obligation as a mother.

"I felt ashamed and like everyone was just rolling their eyes and thinking I was an idiot, that we were idiots. It was embarrassing.

"I did it (got back together) because I loved him but mainly I did it for the children. Regardless of the issues, he had always been an incredible dad.

"In hindsight, I probably should have taken more time, because then we had a rocky relationship for some time and it was that resentment and unresolved anger that was still gnawing away at me."

The swirling media interest after the affair made Brendan into 'clickbait'. In a time before social media and the ability to share their side of the story, Alex says this was very frustrating.

"There were always dramas and for some reason, there was a big media interest in Brendan and he would sell newspapers. The narrative had already been set and there was a preconceived idea of who we were as people. We didn't have a voice then and couldn't say, 'that's been taken out of context' or 'that's not true'.

"If Brendan wasn't the incredible and amazing father he was, I would not have stayed with him. There's a lot more to him than the media has portrayed, that's for sure."

In 2009 after the now-infamous night at the Brownlow Medal after-party where Brendan was extremely intoxicated, his then club Carlton cut ties with him.

The Brisbane Lions offered Brendan a job and so the family made a move to Queensland to escape the media scrutiny in Melbourne and make a fresh start in the sunshine state. Alex says that in the beginning things went well but that Brendan's gambling habits soon became a big problem.

"By the time we moved, we had established there was an issue with his gambling. He was getting credit from bookies and it was completely out of my control.

"At the lowest point - Brendan gambled an entire year's worth of wages away. I couldn't work out why the money wasn't going in. There was no pay. I wasn't working, and I had newborn baby Lulu.

"I was in disbelief. I couldn't believe this could all happen behind the scenes and nobody thought it was important to tell me. I went into recovery mode. We had to sell everything. I moved home with my mum and the three kids and he moved in with some mates."

As Alex took control of the finances, she says it was tough always being the one to police things and lay down the law. It changed the dynamic and not in a good way, but it led to Brendan seeking professional help and embarking on a road to recovery.

"I felt like a killjoy, always nagging and it affected us as a couple. He ended up going into rehab for the gambling and depression.

"Losing his job and hitting rock bottom made him the person he is today. He had to lose it all to appreciate what he has. He knows and understands how lucky he is to have the family he's got, the life he has and the job he's got."

While Alex and Brendan divorced in 2014, it was not the end of their love story.

They got engaged for the second time in 2016 and welcomed fourth daughter Tobi to the family in 2018.

In a bonus episode of No Filter, Alex tells Mia all about their happy 'surprise' baby.

"I fell pregnant a week before I turned 41. It was such a surprise! She has just been the best and most amazing gift to our family: incredible and beautiful."

"I had just got my kids to all be at the age where their all self sufficient. More freedom. No more separation anxiety. Lulu was nine. But it goes so quick and we have savoured every minute with Tobi. It's so special and I'm really grateful I've had this experience later in life."

Eldest daughter Mia is now 22 and a businesswoman like her mum. Brendan and Alex couldn't be prouder of the woman she's become.

"She's a great kid, always been a delight. We were a trio for those first few years with Brendan and we never went away without her. She's just a good person, intelligent and a great babysitter too. We are incredibly proud of her!"

Listen to the bonus episode of No Filter where Mia Freedman and Alex Fevola have a candid conversation about having a child in your 40s. Exclusive to Mamamia subscribers, listen here.