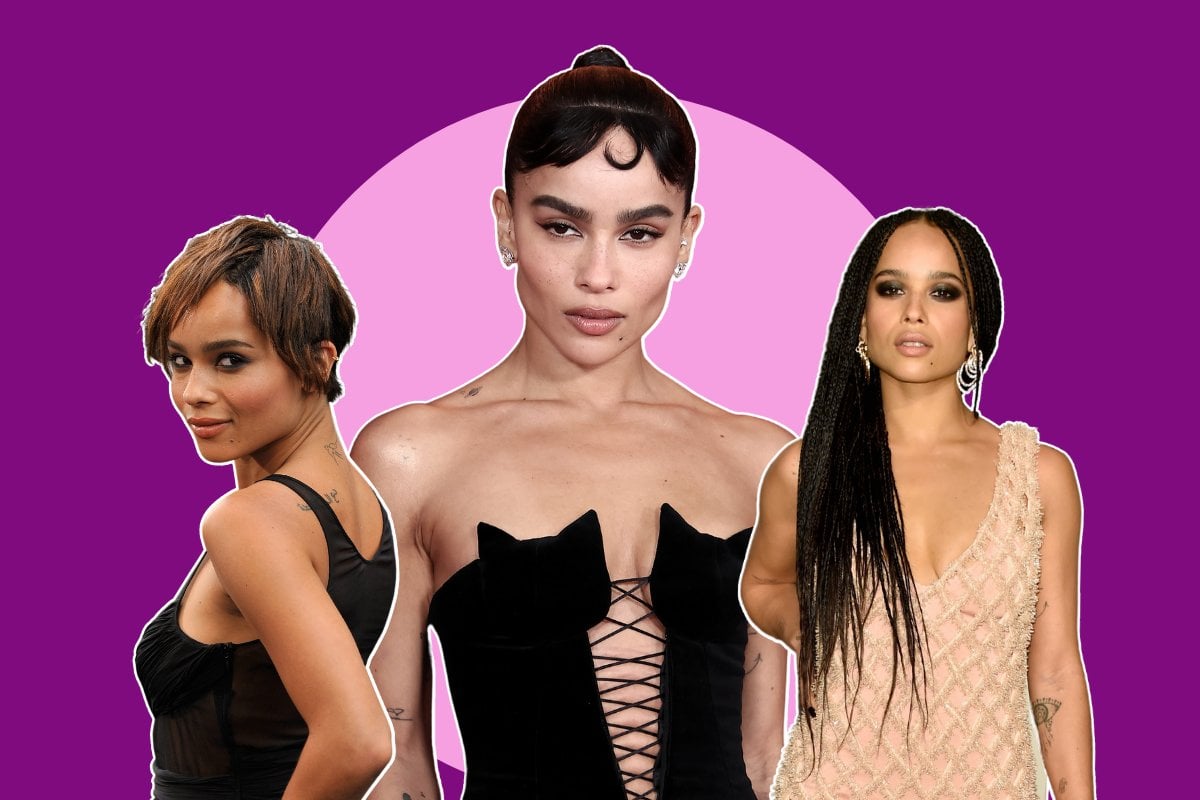 Zoë Kravitz was always destined for a Hollywood career.

Her mother is actor Lisa Bonet, and her father is musician Lenny Kravitz. Her paternal grandmother was Roxie Roker, who made history on the 1970s sitcom The Jeffersons, as one half of the first interracial couple to be shown on regular prime time television.

She has joked that the ultimate form of rebellion would have been if she got an office job away from showbiz. But that never truly appealed to her: too much structure, not enough freedom.

Kravitz made her acting debut in 2007's No Reservations, and had a breakthrough role in 2011's X-Men: First Class.

Her biggest successes have come in the form of action films - like Divergent and Mad Max: Fury Road - and dramas - like Big Little Lies and High Fidelity.

So, the combination of the two genres in a superhero franchise like Batman feels well within her wheelhouse. On brand, even. It certainly does now in 2022, with Kravitz receiving acclaim for her portrayal of Catwoman/Selina Kyle alongside Robert Pattinson's brooding hero in The Batman. 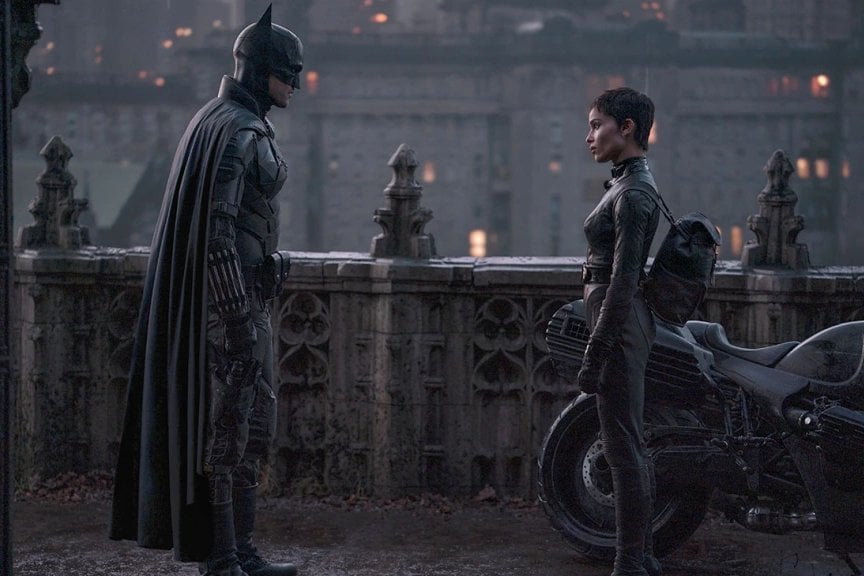 Her success in the role is deeply satisfying, especially considering her past relationship to the DC Universe.

In an interview with The Guardian, Kravitz shared how, in 2012, she had wanted to audition for a small, undisclosed role in director Christopher Nolan's final Batman film, The Dark Knight Rises. She never made it to the audition stage, however, because she was told she was too "urban" for the role.

"I don't know if it came directly from Chris Nolan," she explained. "I think it was probably a casting director of some kind, or a casting director’s assistant… Being a woman of colour and being an actor and being told at that time that I wasn't able to read [for the role] because of the colour of my skin, and the word urban being thrown around like that, that was what was really hard about that moment."

It wasn't a new story. She shared similar in a 2015 interview with Nylon.

"In the last Batman movie, they told me that I couldn't get an audition for a small role they were casting because they weren't 'going urban,'" Kravitz said. "It was like, 'What does that have to do with anything?' I have to play the role like, 'Yo, what's up, Batman? What's going on wit chu?'"

But following The Guardian's story, Kravitz's quotes got twisted in subsequent reporting. Addressing headlines assuming she was rejected from playing Catwoman, Kravitz clarified her comments further in an Instagram story.

"I was NOT told I was too urban to play Catwoman in The Dark Knight [Rises]. It would have made NO sense for me to even be considered for that role at that time.

"I wanted to AUDITION for a small part in the film and was told (I do not know who this said but this is how it was worded to me) that they were not going 'urban' on the part. This is something I heard a lot 10 years ago - it was a very different time." 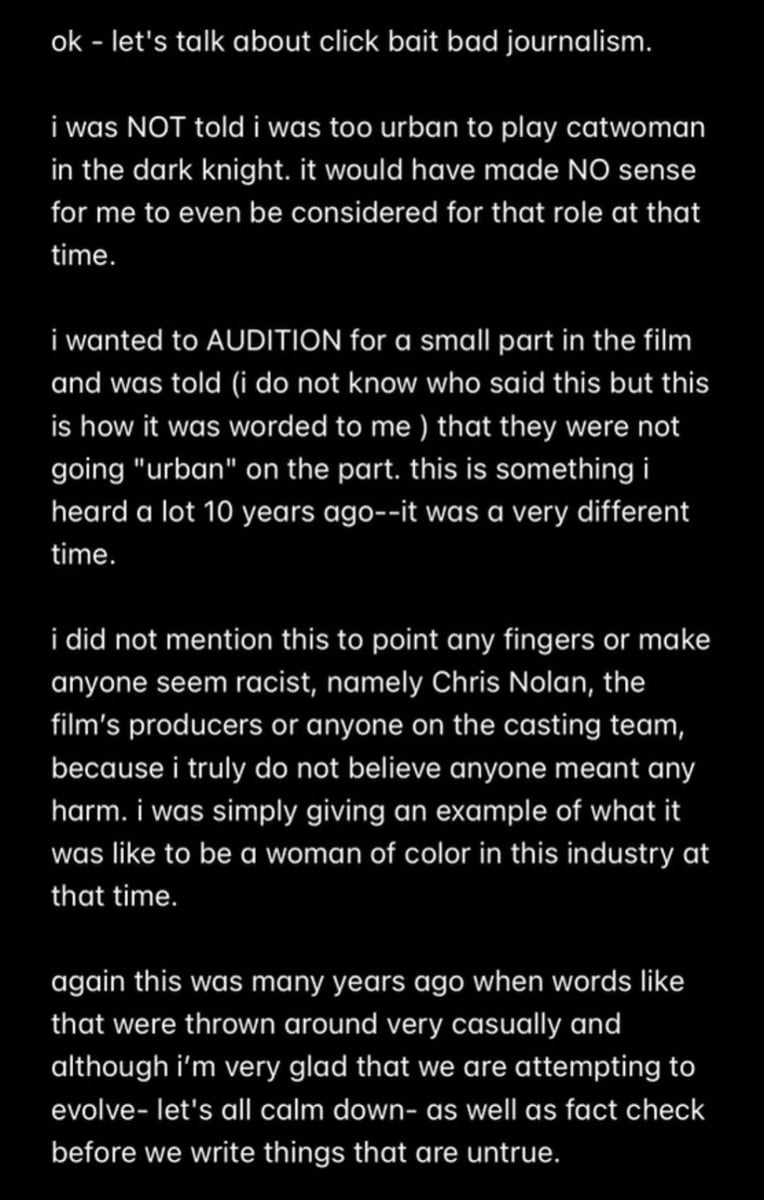 Kravitz said she did not want fingers pointed at anyone involved in The Dark Knight Rises.

"I truly do not believe anyone meant any harm. I was simply giving an example of what it was like to be a woman of colour in this industry at that time."

Kravitz would know. She's lived within the industry her entire life.

Her dad would occasionally pick her up from school in a sports car and netted shirt. Another of her oft-told stories is waking up as a 15-year-old to find Ashton Kutcher making omelettes in her kitchen. Not exactly standard childhood memories, but fun ones nonetheless.

But there was a dark side too. Bullying at school, of course, and the pressures of a spotlight she had been born into. As a teenager, she felt like a "chubby, awkward brown girl around a bunch of blonde girls", which contributed to struggles with bulimia and anorexia.

"My mother's a...," she said, hesitating, "...beautiful woman, and I think, in some way, I felt intimidated by that sometimes." Also: "My dad dated a lot of supermodels," she laughed.

Her parents were people who "broke down boundaries in a lot of ways", as she explained to The Guardian.

"They both dealt with being artists who didn't act or dress or look or sound the way a Black person was supposed to act in terms of what white people specifically were comfortable with."

Even so, it took her a while to figure out her own identity as the child of two biracial parents.

She told Nylon she would tell her classmates: "I'm just as white as y'all".

"I identified with white culture, and I wanted to fit in. I didn't identify with black culture, like, I didn't like Tyler Perry movies, and I wasn’t into hip-hop music. I liked Neil Young.

"Black culture is so much deeper than that, but unfortunately that is what's fed through the media. That's what people see. That's what I saw. But then I got older and listened to A Tribe Called Quest and watched films with Sidney Poitier, and heard Billie Holiday and Nina Simone. I had to un-brainwash myself. It's my mission, especially as an actress."

Now, Kravitz is much more comfortable with herself.

"I was uncomfortable with my blackness. It took me a long time to not only accept it but to love it and want to scream it from the rooftops," she told The Guardian.

Next on Kravitz's agenda is her directorial debut, and a returned focus on music.

Since 2013, Kravitz has been the front woman of electro pop duo Lolawolf.

In June 2021, she announced she would direct Pussy Island, a film she also co-wrote, starring Channing Tatum.

After bonding over work, Tatum and Kravitz have been dating, mostly very privately, since August 2021. Kravitz was previously married to actor Karl Glusman, and has also dated Gossip Girl and You actor Penn Badgley.

All of this, coupled with the profile of her The Batman performance, have placed Kravitz in the role of internet 'it girl'.

It's ironic that it happened just as Kravitz re-evaluated how she used social media.

Until September 2021, she'd been a prolific sharer on Instagram, but she took a step back and deleted all her content after criticism of her 2021 Met Gala dress "hurt [her] feelings".

She's also critical of the constant surveillance that accounts like Instagram's Deuxmoi encourage, where candid photos of celebrities in mostly mundane situations are broadcast to millions of followers.

"People think that what they're doing is OK – taking pictures of people when they're trying to eat or have a personal conversation. And if you say, 'Don't do that,' they don't care. It's weird to not be considered a human being, which is what it feels like in those moments." 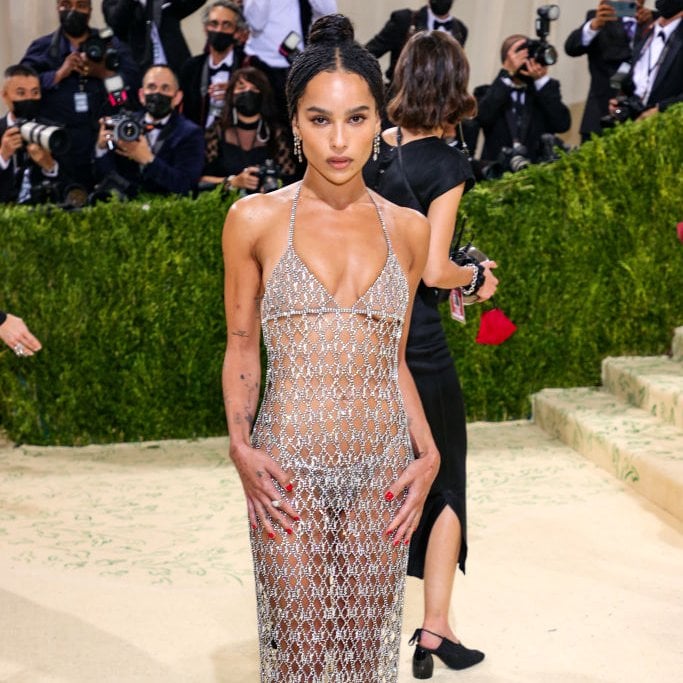 Kravitz knows that her last name has opened many doors for her.

"It was very easy for me to get an agent when I wanted to act, for obvious reasons," she told Complex.

"And I don't know, maybe it's not because they thought I was talented—I wasn't the most talented girl in the world when I was 15. It was because my parents were famous, and they were like, 'Cool, maybe we can make money off of that.'

"I know so many talented people that do the most amazing things but they need to work at a restaurant. I don't. I can make all the art I want and get paid to do it—it's f***ing crazy. I'm so thankful for it."