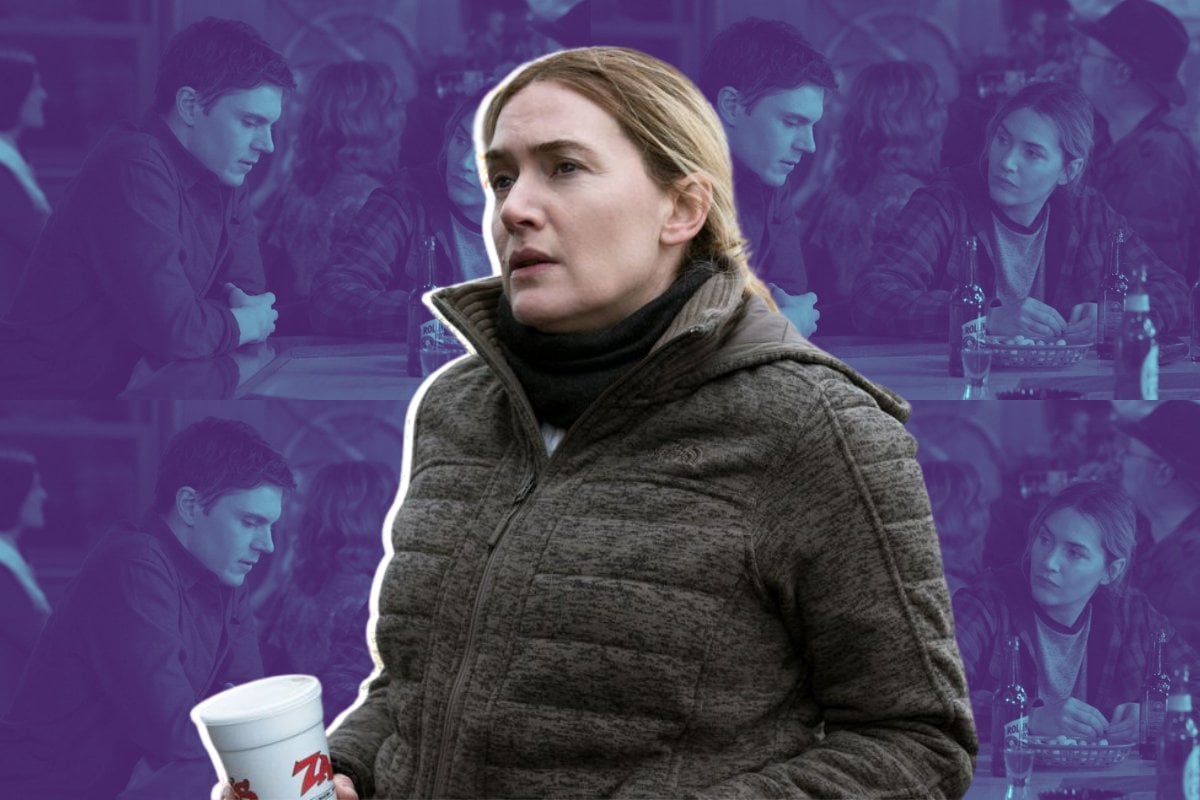 Content warning: There are many, many spoilers for the first five episodes of Mare of Easttown in this article. Please read on at your own risk.

No, seriously. So many spoilers.

On Monday, the fifth episode of Mare of Easttown dropped on Binge.

The Kate Winslet-helmed series follows a very specific group of white people living in a small, cold town in Pennsylvania, where the lols are many and the women keep on disappearing.

The first season, which is dropping an episode per week, has quickly become one of the most talked about TV shows of 2021.

It somehow manages to straddle that precarious territory between goofy comedy and doomy drama, allowing us to laugh out loud in one scene, before tackling the hefty topics of drug addiction, suicide, murder and molestation in the next.

The writers have created a world we want to visit every week, so we can catch up with the locals at the dive bar, see how Betty Carroll is going with the whole peeping tom "ferret" saga, and also solve that string of pesky murders and disappearances.

The people of Easttown have quickly become like family, albeit a family in which at least one member is a killer/pedophile.

But there's one character we fell in love with harder and faster than the others. And that's Mare's county police partner Detective Colin Zabel, played by Evan Peters in the series.

Zabel arrived in town in episode two to a frosty reception from Mare, but he quickly won both Mare and us over.

Speaking to the Vanity Fair podcast Still Watching: Mare of Easttown, Zobel and Peters explained they wanted to create a character that was so endearing, it would destroy the audience when he is killed off.

“I felt like it was very clever,” Zobel said of Ingelsby’s script. “He’s having his cathartic moment where he’s becoming more active as a character, after we’ve heard his backstory and how he didn’t really solve that case in Upper Darby. It’s just taking a person directly at a point in which they have the most opportunity, and stopping them.”

We'd not only bought into Zabel's backstory and the man he was becoming, but we were also super invested in his potential romance with Mare.

By episode four, we had totally bought into the fantasy of a 40-something grandmother hooking up with her police partner who doesn't look a day over 25 and whose mother seems very... involved.

We could imagine them catching serial killers by day and sharing a greasy pizza with Helen and the rest of the gang at Mare's house at night.

That's why episode five felt like such a punch in the guts.

None of us saw it coming, and we definitely didn't... want it.

One of our family members was brutally killed off and now we'll never know whether he could have become step-grandfather to Mare's grandson at the ripe old age of 34.

We didn't even get any warning. They lured us straight into the trap.

In the opening scene of the episode we learnt that Betty Carroll died in a car accident. No, the ferret didn't cause it. (That we know of).

Mare and her mother Helen attend the wake at the Carroll's house only to have Betty's husband Glenn announce that he once had an affair with Helen.

Listen: Why you need to watch Mare of Easttown. Post continues below.

We're still riding on the high of that scene when Mare and Zabel go on an awkward first date. Zabel's mum has warned him that Mare is only hanging out with him because she wants the hot murder goss and she's right.

The date abruptly ends but then they meet up the next day when there's a break in the case. They kiss in front of what is considered a nice body of water in Easttown.

They go to the tavern to question the current owner about his van. The girls he's keeping captive in his basement start banging on the pipes, Zabel goes to draw his gun, the perp draws first and shoots Zabel in the head.

The potential happy ending is ripped out from under us.

Yes, the two missing girls were saved. But now Mare has to process yet another loss, while solving Erin's murder - and its possible link to her own son's suicide.

Plus, she's got some serious explaining to do. Like why she was at the tavern in the first place, how she had all the murder gossip, and why she put Mrs Zabel's son is such a precarious situation.

It's a testament to the writing that a character we'd only known for four episodes made such a big impact.

God knows what the final two episodes have in store for us.

The first five episodes of Mare of Easttown are streaming on Binge now.

Reply
Upvote
Winslet, brilliant as ever.
Ep 5, I shouted in shock.
V
veronicae a year ago