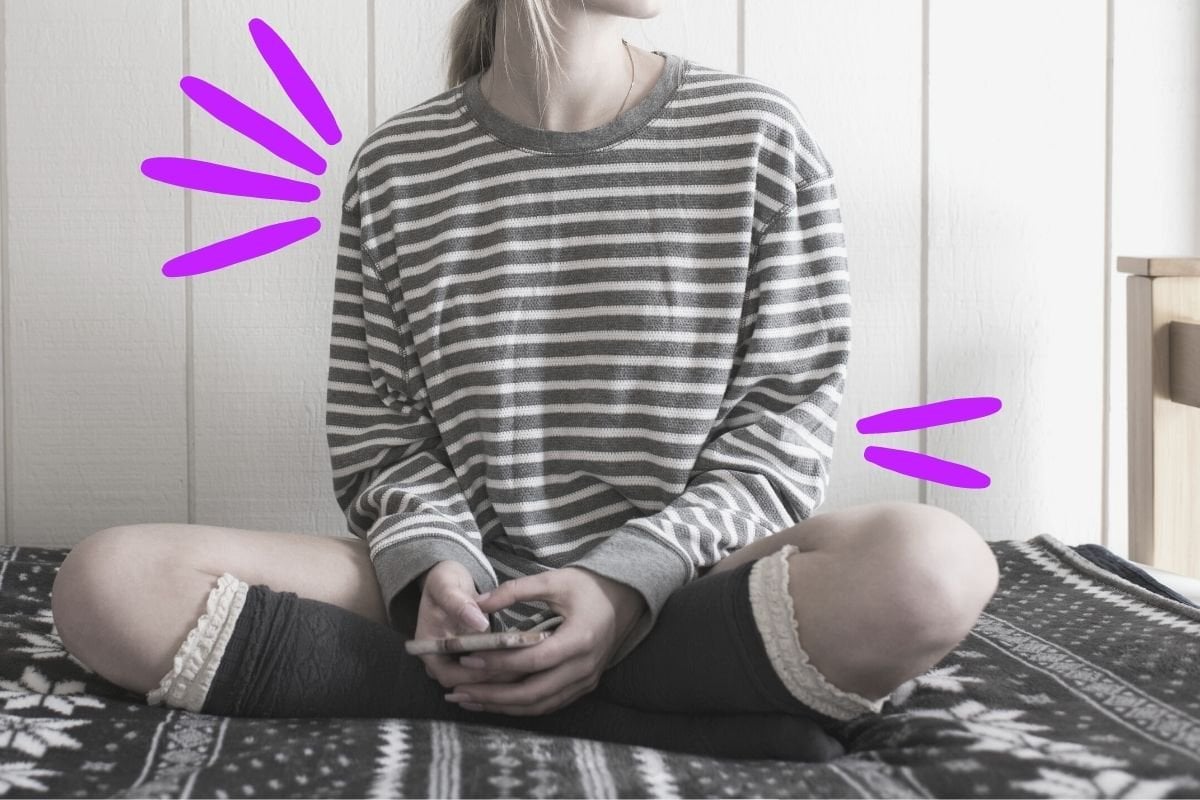 Courtney lives in a lovely little bedsit in a converted police station on the NSW South Coast.

All the furniture was new when she moved in more than four years ago and to her, it's kind of perfect.

There's a communal living room and a computer room just down the hall and no stairs, which is a non-negotiable for the 24-year-old who lives with a disability.

Sidenote: How can you help Australia's homeless population? Post continues after video.

But despite having a roof over her head, and a bookshelf in her living room, Courtney is technically homeless.

As she tells Mamamia, "being homeless is having a lack of a stable home address. You don't have to be living on the streets without a roof over your head."

Due to a family breakdown as she was finishing highschool, Courtney found herself without anywhere to live at the age of 18.

For more than a year, she slept either in the little red Toyota Corolla her nanna bought her when she got her licence, or on friends' couches.

"I think there's a lot of stigma attached to family conflict and homelessness. I wouldn't really divulge much about myself [to my friends]. It would just be in terms of 'oh yeah can I crash here tonight?' Or 'I don't feel like going home.' I didn't necessarily have to tell people about my situation to get help from them. I didn't want to make myself vulnerable or have people think 'what's wrong with you that you can't work out differences or you can't get a place of your own or you can't live independently'," she told Mamamia.

Courtney continued to couch surf until she used up all of her favours. She'd plan her meals around dinners at her mates' houses. Sometimes she'd get takeaway. Sometimes she wouldn't eat at all. Even her girlfriend didn't know how bad it was - Courtney kept it a secret.

"I just sort of shut down. It became about survival. You don't even think about your circumstances, you just have to accept it and get on with it, really. If you don't have a place to go and you have no certainty about your life, of course, there's that feeling of constant danger. You know, will the car run out of petrol? Will the locks not work this time? What if I can't keep getting youth payments? What about if I don't have enough for my next surgery?"

On any given night in Australia, 27,680 young people aged between 12-24 are homeless, according to the 2016 Census. More than half are living in severely crowded dwellings, about 18 per cent are in support accommodation, and nine per cent are in boarding houses.

What have young people done to get themselves in that situation?

What opportunities have they let slide that could have gotten them a job?

In Courtney's experience, mental health is a huge issue amongst her peers and some simply aren't able to engage in traditional education, employment and training.

"[Being able to do that] has a domino effect, in that they would study or work and then they'd secure work long term and get enough income to get housing. But some young people can't do that because of various reasons. I myself can't really work right now. I can study when they ease up my painkillers but not all the time."

An infection Courtney developed as a baby resulted in a deformity in her left leg, leaving it shorter than her right. She's had a number of corrective surgeries and uses either a wheelchair, crutches or a walking stick depending on where she's at in her recovery.

When she first became homeless, she scoured private rental sites for a place she could afford. The only ones she could, had stairs.

Courtney survives off a disability pension and earns $868.30 a fortnight. She's currently studying a Bachelor of Community Services and lives in a youth homelessness service run by Southern Youth and Family Services to which she pays rent. It's the nicest place she's ever lived.

"I love it. Some people would say it's small, but it's kind of perfect for me, because it's just me here. I have a lock on my door. It's my bed. I can change the quilt cover if I want. That probably sounds stupid and simple but it's those small things in life. That sense of control and safety is really important to me," she explained.

To be eligible for the accommodation, she has to be under 25. She has to keep on top of any opportunities in the private rental market that suit her needs, and she has to be willing to engage in education, employment and training to be eligible for housing through the government system. As Courtney tells Mamamia, her disability doubles her wait time on the housing lists because of a lack of accessible dwellings.

Rents in Aus have soared by 15.1% in just one year, while the proportion of social housing has declined.

Without action, more people will struggle to afford rent and be at risk of homelessness.

Technically, she should be kicked out of the program she's currently in on her birthday in October, but she's been told she can stay until her surgeries are finished.

"I am worried about what happens after that. They can refer me to other services for families and adults and that sort of thing. Or they can make a case for me to the Housing Commission. So they will do what they can to advocate for me, and to make sure my case doesn't end in repeat homelessness," she told Mamamia.

Courtney's hopes for the future are pretty simple, really. She doesn't care where she lives, she just wants a place of her own that's permanent and that has a lock on the front door. She wouldn't mind another couple of bookshelves either.

And she wants to work in the system she's currently in once she's finished studying so she can make use of her lived experience. Because in Courtney's eyes homelessness isn't inevitable, it's a fixable problem.

"I have that understanding that some people are in these situations, not because of anything they've done. But because there are structural barriers in place that impede their ability to get what they need in life," she told Mamamia.

*Feature image used is a stock photo for privacy reasons.

National Homelessness Week (1-7 August) is an annual campaign coordinated by Homelessness Australia. It seeks to raise awareness around people experiencing homelessness, the issues they face, and the action needed to achieve long-lasting solutions, including increasing the supply of social housing. Find out how you can help, here.