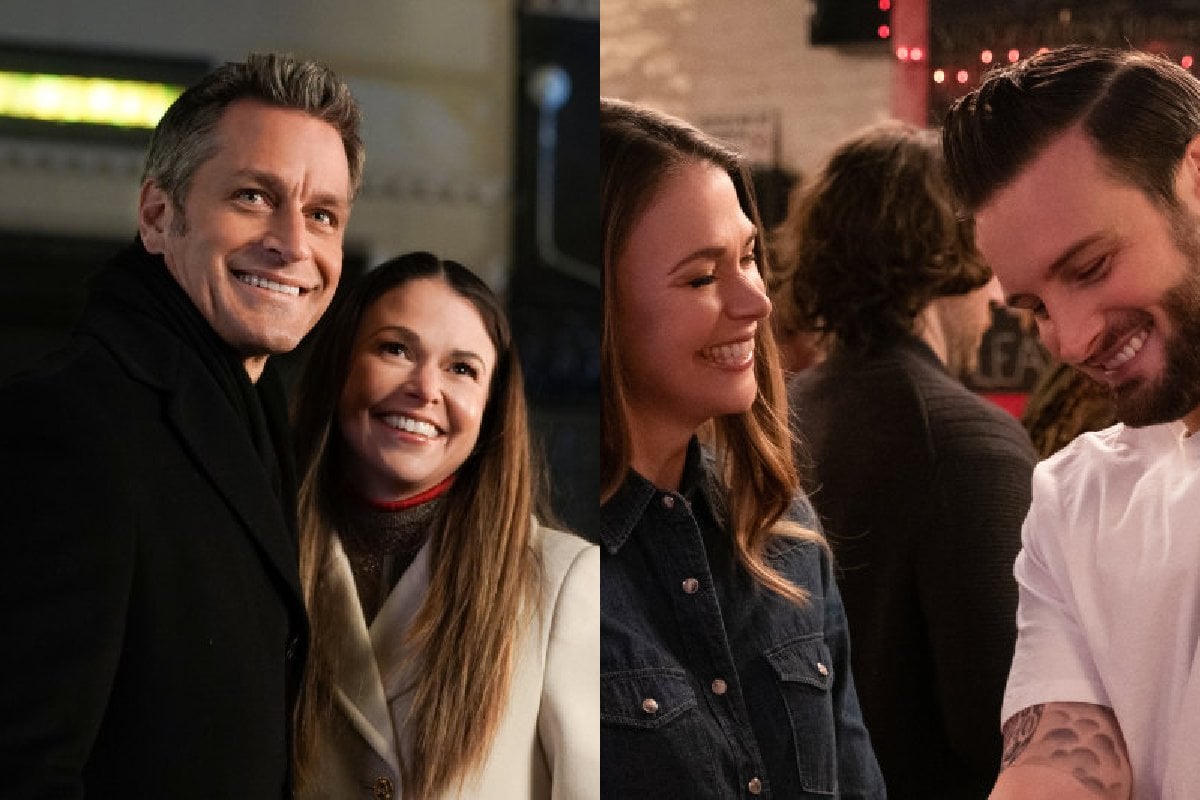 The article contains major spoilers for the final season and episode of Younger. Read on at your own risk.

Some TV series go out with a bang.

That bang is usually either universally hated (Game of Thrones, anyone?) or loved (Mare of Easttown, I'm looking at you, you cheeky bugger) by the die-hard fans who have followed the characters' storylines for months, or in most cases, years.

Younger isn't one of those TV series.

The Younger finale episode, which dropped onto Stan on Thursday night, was more like a light nudge.

A subtle fade out rather than an explosive, dramatic goodbye.

And that's exactly how it should have been.

Watch the trailer for Stan's Younger. Post continues below.

Seven seasons ago, we were introduced to Liza Miller (Sutton Foster), a 40-year-old divorced mum-of-one from New Jersey. Along with her best mate, Maggie (Debi Mazar), she concocted a plan to pretend she was an emoji-using 26-year-old to break back into the publishing industry.

Their plan worked, and Liza became the assistant to Diana Trout, the head of marketing at Empirical Publishing, the greatest fish-themed diva of the modern TV era, and a character who undoubtedly deserves her own spin-off.

When she was at a local bar with Maggie celebrating her new role, Liza took off her shoe and waved it in the air to get the bartender's attention. While her plan failed, she caught the eye of a local millennial tattooist named Josh (Nico Tortorella), a man so ridiculously good looking he made 40-year-old women around the world want to abandon their safe marriages and concoct a ruse to be 26 again.

They were the tattooed arms that launched a million sexual fantasies.

Josh asked Liza out, believing she was his age. Then Liza met Charles, the boss of Empirical Publishing and the kind of man who could give her the life she's always wanted.

Thus began the greatest love triangle of our time.

Over the seven seasons we watched Liza fall in love with Josh then Charles, then Josh again, then Charles again. We saw her find her feet in publishing, going from an assistant to an editor. We saw her develop cross generational friendships with Kelsey and Lauren, and strengthen her bond with both Maggie and Diana (spin-offs for these two, I'm telling ya!).

We saw a man do unthinkable things to a sheep. And a woman's labia get stuck on an ice sculpture of a giant fish coming out of a toilet.

It was a bloody beautiful ride.

In the penultimate episode, Liza and Charles found their way back to each other. Charles had been a d**k all season, and it seemed like Liza was about to make a huge mistake.

In the final episode, Liza and Charles quietly parted ways after Liza rolled over in bed and said, "We're not going to make it, are we?"

Theirs was a love story built on lies, muddled by an uneven power dynamic, and complicated by their exes and a potential blended family.

Their happy ending was never a given and to wrap things up between them in a neat bow, would have resulted in a deeply unsatisfying ending for fans.

The next day, Charles offered Liza the role of editor-in-chief, and the opportunity to run Empirical Publishing while he was at his writers' retreat.

Liza, now well into her 40s, had finally gotten what she'd wanted.

That night, she met Kelsey, Maggie and Lauren at a bar to celebrate. Each of the women spoke about their futures. Kelsey was moving to LA to launch Incubator with investment from Reese Witherspoon's company Hello Sunshine (ok, I'd watch the sh*t out of that spin-off too). Lauren was in a polyamorous relationship her ex-boyfriend and his boyfriend. Classic Lauren. And Maggie had fallen in love with Cass, the woman who tried to get her cancelled. (This is such a complicated storyline but Debi Mazar and Janeane Garofalo are the lesbian power couple we never knew we needed in our lives.)

And quietly, during a two-minute scene in a booth in a bar, we learnt what Younger was really about.

It was never about Josh. Or Charles. It was about these women, from two different generations and from different worldviews, coming together to support each other.

Because beautiful tattooed men and career highs come and go, but at the end of the day if you've got your mates, you can get through the worst of it.

WATCH CLUB: The Final Season Of Younger Will Answer Your Biggest Questions. Post continues below.

In the final scene, Liza once again approaches the bar, takes off her shoe and waves it at the bartender.

"You never wave a shoe," he laughs.

“I’ve been right here by your side all along,” Josh replies.

The series ends with the pair talking and laughing at the bar.

We don't know if they end up together. Maybe they do. Maybe they have a beautiful tattooed baby together, who comes out of the womb reading the literary greats.

Maybe they get together and break each other's hearts three weeks later. Maybe they're just destined to be friends.

What we do know is that whatever happens, those three women sitting in that booth in that bar will be there for Liza.

And that's a bloody beautiful thing to see.

All seven seasons of Younger are streaming on Stan now.