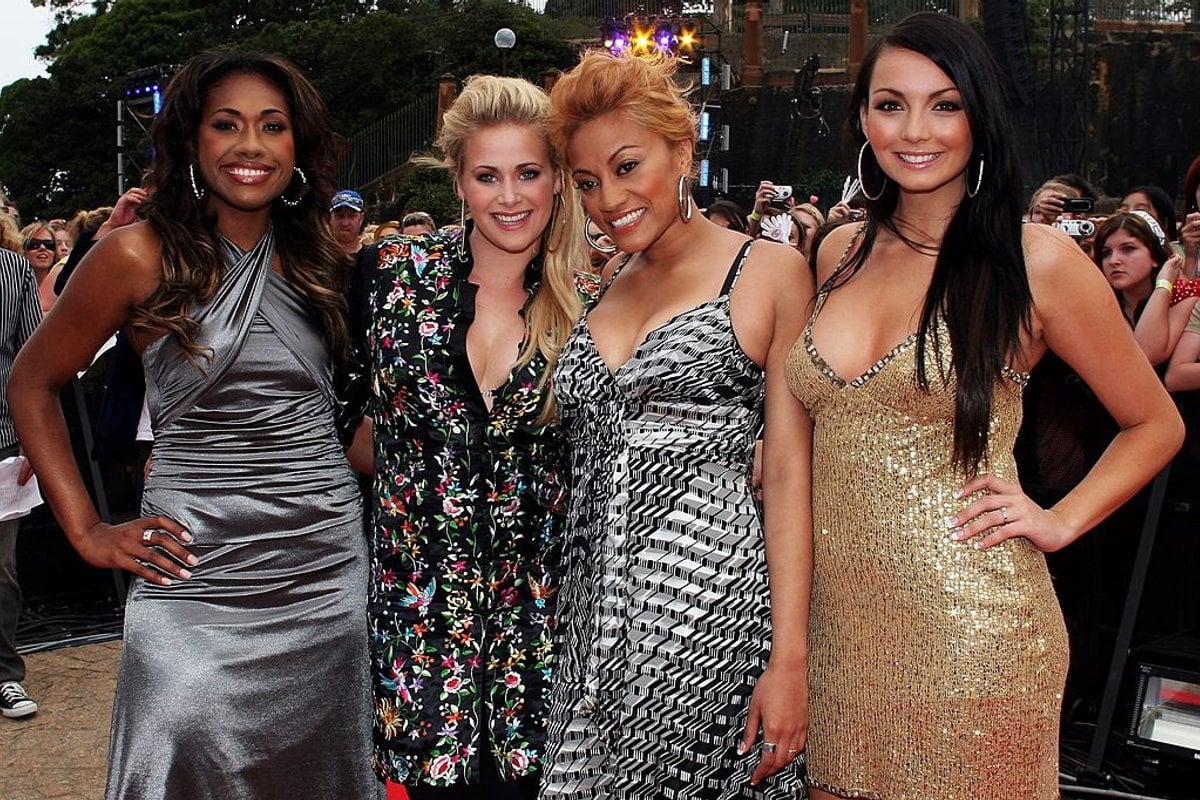 Paulini, Ricki-Lee Coulter, Emily Williams, Kate DeAraugo… and then Jess Mauboy as a replacement for Coulter. Now that’s a lineup.

The Young Divas were not so much a girlband and as an Australian Idol supergroup.

Formed in 2006, and only ever meant to stay together for one tour, their first single, 'This Time I Know It’s For Real', hit number two in the charts.

They recorded an album, Young Divas, which went double platinum. But there were rumours of feuds between the women, Coulter sensationally quit, and then, two years after forming, the Young Divas disbanded.

Watch group member, Paulini share her experience of domestic violence on I'm A Celebrity... Get Me Out Of Here! Post continues below.

Williams remembers the Young Divas as being “such a pressure cooker, filled with all the talent and all the emotions”.

“I honestly believe that any time you put a group of strong women in a close-knit situation for long periods of time, emotions are going to spill over about one thing or another,” she tells Mamamia.

“Throw in the long hours, the egos, and also everyone fighting for what they want in the line-up… you know. Also, we were so young. We really were ‘young divas’!”

Coulter quit the group in 2007 to focus on her solo career.

“At the time I remember I felt so shocked that I didn't know how to feel,” Williams says. “Now, though, I know that Ricki was only doing what she thought was best, and more power to her for that! I will always love and respect her.”

Williams’ older sister Lavina, another Idol finalist, briefly filled in for Coulter – “she really saved our asses” – before Mauboy was announced as the new Young Diva.

Williams says Mauboy brought “such a fresh energy” to the group.

“She is such a happy and bubbly person and I think the group's dynamic really benefited from her,” she says.

“Jess’s talent was obviously outstanding, but being the baby of the group meant she could find her way in the industry with support from her big sisters.”

The Young Divas disbanded in 2008, and Williams says it was time.

“We all wanted it. We were so hungry for solo careers.”

Mauboy went straight from the Young Divas into a massively successful solo career, with hits like “Running Back” and “Burn”.

As well as a string of top 10 albums and singles, she’s represented Australia at Eurovision and toured with Beyonce. She’s starred in The Sapphires and The Secret Daughter, and will be a judge on The Voice this year.

In 2016, Mauboy talked to The Fix about how hard she found joining the Young Divas.

“It was a scary, difficult time being the new girl,” she said.

Coulter had her biggest single, “Can’t Touch It”, the same year she left the Young Divas. She’s now best known for her TV work, returning to Idol as a reporter and, more recently, fronting Australia’s Got Talent.

In 2019 she admitted on 97.3FM Breakfast that she never really “got on” with DeAraugo, saying, “I would just rather be anywhere but with her.”

She starred in the stage musical The Bodyguard in 2017, and that same year, she was given a suspended sentence for buying a fake driver’s licence.

This year she appeared on I’m A Celebrity…Get Me Out Of Here! and revealed she’d been in an abusive relationship while in the Young Divas, once arriving at a gig with a “massive black eye”.

“I was just like making up all types of sh*t, like, ‘I got hit in the face with a ball,’ but everyone was like, ‘That’s bullsh*t,’” she told fellow contestant Grant Denyer.

She appeared on the weight-loss show Excess Baggage in 2012, and then, in 2017, was charged with drugs and weapons offences, after police in Shepparton pulled her over and found ice, a tomahawk and a large knife in her car. She pleaded guilty and avoided conviction.

In 2015, she told KIIS FM’s Kyle and Jackie O that once the Young Divas disbanded, she was “out of control” in every aspect of her life.

“Basically, after the Young Divas lost the plot, I went into hiding. After that, I really lost the plot and just ate myself into a mess.”

In February 2021, in an interview on The Morning Show, the 35-year-old revealed that she was now sober and pursuing a career in the construction industry.

"The good news is that I’m nearly three years in recovery now," she told Larry Emdur and Kylie Gillies.

"It was a dark time but an incredible learning experience now that I’m out the other end. My life has completely changed in the last three years - it looks very different."

DeAraugo said she struggled with the public scrutiny when she was arrested.

She said: 'It would have been nice for nobody to know my name when things got really dark.'

As she spoke about moving on with her life and her new career, DeAraugo said: "It is what it is and what happened happened.

"The last three years I’ve been pretty off the radar and really in my own word and it’s been a pretty personal time."

As for Williams, she’s released music independently and shared the lead with Paulini in The Bodyguard. She also had a role in the horror movie Boar, which starred John Jarratt and Hugh Sheridan, as well as Ricci G.

“He showed up and we instantly hit it off,” she says. “He is such an easygoing, funny guy.”

Williams says she’s “so stoked” with how “Ride With Me”, her track with Ricci and Josh Goodwill, is doing.

“The international response to this one has been killer and I couldn’t be happier.”

She has a new album, Thirty Something, being released in a few months.

Williams says she doesn’t stay in touch with the rest of the Young Divas as much as she would like, but there’s always a possibility of a reunion.

“We were together in such an important time of my life. I'll always cherish the memories. And who knows? Maybe one day we will all meet up and belt out a few bangers!”

Reply
Upvote
I always thought that creating the Young Divas was sexist....you've got a group of strong performers and you make them share the spotlight? It doesn't happen and notice it wasn't done to the male winners of the Idol competition. Puting all the female winners in one group was laziness on the part of the record company. They all deserved the opportunity to be solo artists.
S
simple simon a year ago

Reply
Upvote
1 upvotes
@mamamia-user-952899236 Firstly, they weren't all "winners"; except for Kate DeAraugo, they were all contestants. Secondly, I don't think anyone made them do it. I think the women themselves realised they had more chance of initial success if they grouped together, rather than each starting out as solo artists. And as for it not being "done" to male contestants, that is actually how One Direction started.
Resources
Very Peri
News
General
Opinion
True Crime
Politics
Sport
Explainer
Entertainment
Celebrity
Reality TV
Movies
TV
Books
Rogue
Royal
Lifestyle
Beauty
Fashion
Weddings
Home
Wellness
Health
Fitness
Travel
Food
Family
Before The Bump
Pregnancy
Baby
Kids
Teens
School
Parent Opinion
Work & Money
Money
Finance
Career
Lady Startup