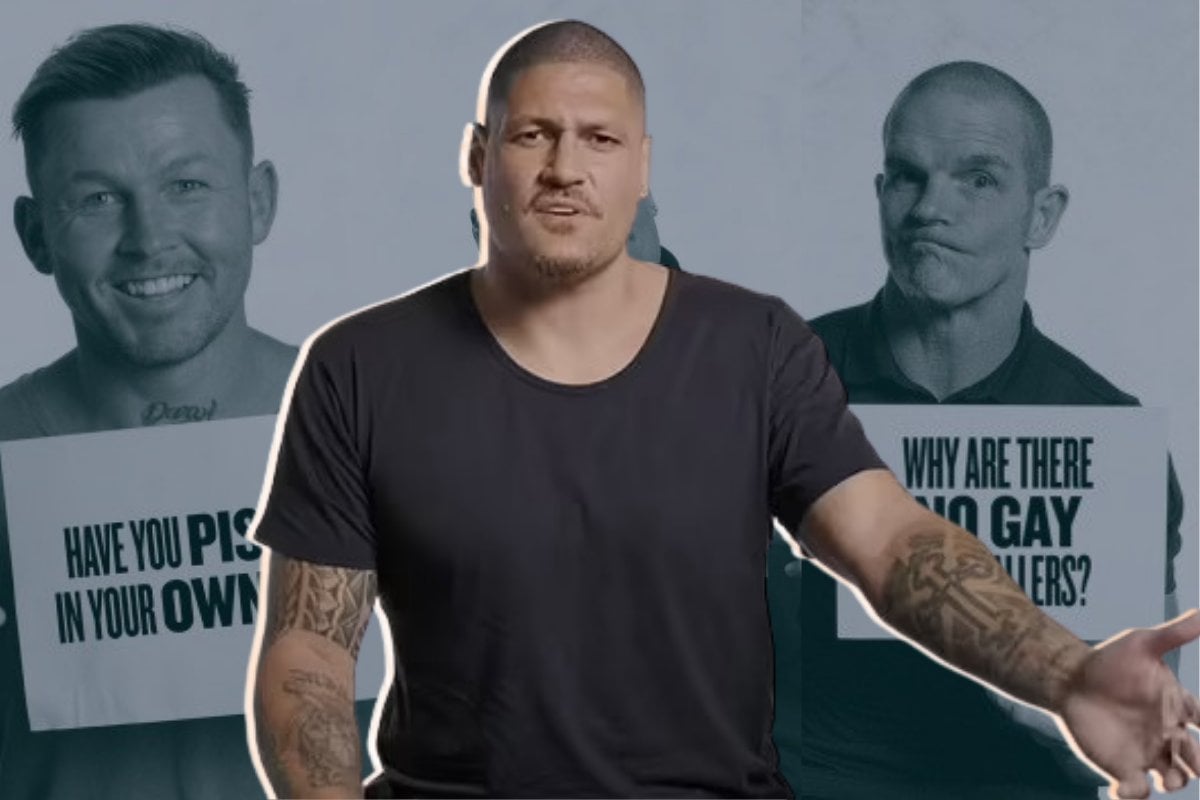 In a TV show full of uncomfortable questions for footy players, there was one that fired up former NRL champion Willie Mason.

Speaking on ABC's You Can't Ask That on Thursday night, Mason, along with other former NRL and AFL players including Ian Roberts, Todd Carney, Dean Widders, Jude Bolton, Brock McLean and Dan Jackson, were faced with the question: "Why do so many of you treat women like s***?"

"There's over 1000 people that play this game. You're talking about five people."

Watch: Former footballers on You Can't Ask That. Post continues below video.

Mason then called for more serious repercussions for players who do disrespect or harm women.

He recalled seeing a video of an NRL player degrading a woman during a sexual act, suggesting there were double standards where Carney lost her job after his infamous 'bubbler' incident while this player continues to play.

"That guy who filmed that girl, putting his foot on her head, spitting on her," Mason said. "The disrespect I saw in that video made me sick and I see some pieces of s**t playing our game right now.

"Todd Carney, on the other hand, just pissed his own mouth and got his contract ripped up, and I don't think that's fair.

"I just don't think the repercussions are big enough." 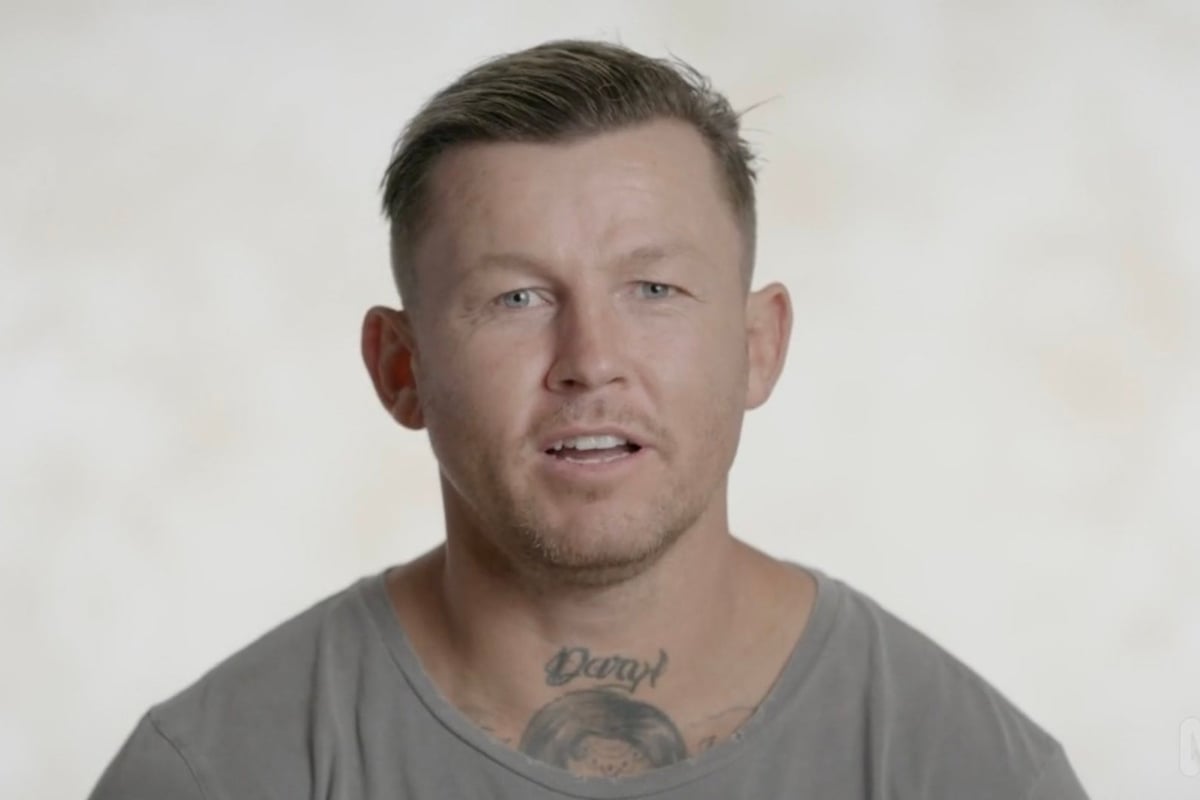 Todd Carney on You Can't Ask That. Image: ABC.

Mason said any player convicted of domestic violence should face a lifetime ban.

"If you do anything like that you're sacked. Not have six months off and you're welcomed back in the back door and playing NRL. No, you're done.

"If you were like that and in a club and you said something to a woman that I didn't like, then I would call them a f***wit."

"If you hit a woman and stuff like that, well, there should be a black mark through your name straightaway.

"There's a lot of times where people will accept things because a person can throw or kick a football better than someone else. And I think we've got to look past those achievements in the sporting arena and look at the behaviour of some of the people and just go, 'Well, that's not acceptable'."

Widders said football culture often used being around and with a lot of women as a way of showing off, which was unacceptable.

He said further women's involvement was needed right across the levels of rugby league.

All the players said they could think back to times where they'd seen or been part of this culture of disrespect.

"Situations like that where guys have been overly sexual in their actions towards women, I just wish I'd been the person I should've been," Ian Roberts said.

Former AFL player Dan Jackson said change needed to come from within the sporting community, where those involved held each other accountable for their words and actions.

Elsewhere in the episode, the player's tackled questions about numerous issues in sport including racism, homophobia, mental health, eating disorders, concussions and traumatic brain injuries and the challenge of life after football.

You can watch the full You Can't Ask That - Ex-footballers episode on ABC iview.

Reply
Upvote
6 upvotes
What did all the players who saw those degrading videos do? If you don't speak up, you're a part of the cultural problem.

Reply
Upvote
1 upvotes
@km Yeah, it seems to me that comments like "it's only 5 people in the game who give it a bad name" are utterly ignorant, and perhaps wilfully so. Time and time and time again we see sportsmen act despicably, but still prosper professionally and personally. It's the culture of their industry - and society at large that venerates professional sport - that allows them to do so.

Reply
Upvote
@mamamia-user-482898552 It's well worth a watch to see the comments as a whole, rather than as an isolated grab for this articel. Willie Mason had the strongest condemnation of this behaviour and made excellent points criticising how the NRL treats DV.
He actually came off as an eloquent and thoughtful man, and I believe his reaction was based on the frustration of being tarred by those who are perpetrators.

Reply
Upvote
1 upvotes
@kiwicat Yes, you're right that I probably shouldn't be making too many assumptions without watching the show. However, isn't "frustration of being tarred with the perpetrators" something that prompts "good men" to protest "#notallmen"?
I think it's problematic for anyone involved in sports like rugby league to try to distance themselves from the bad apples when they actually work (and choose to continue to work) in an institutionally rotten company. For me, it's a bit like working for a tobacco company and accumulating a lot of personal wealth and privilege from doing so, but with the next breath condemning your employer for causing cancer.
News
General
Opinion
True Crime
Politics
Sport
Explainer
Entertainment
Celebrity
Reality TV
Movies
TV
Books
Rogue
Royal
Lifestyle
Beauty
Fashion
Weddings
Home
Wellness
Health
Fitness
Travel
Food
Parents
Before The Bump
Pregnancy
Baby
Kids
Teens
School
Parent Opinion
Work & Money
Money
Finance
Career
Lady Startup
Relationships
Sex
Dating
Separation
Friendship
Family
Real Life
Couples