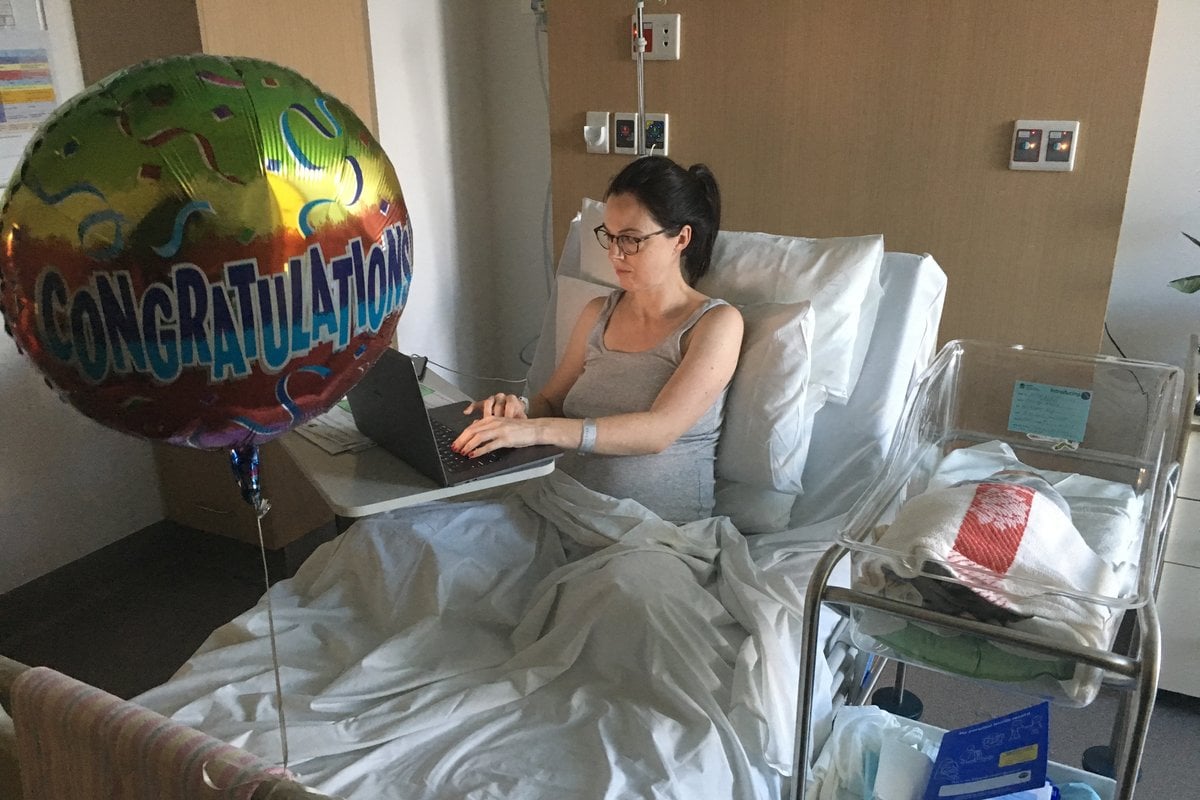 What seems like a lifetime ago, Mamamia’s Lady Startups Instagram featured a photo of me working on my laptop from my hospital room, mere hours after giving birth to my first baby.

That baby is now three years old, and there is an 18-month-old following along behind him.

At the time my photograph was featured, I received many messages from women who saw it, telling me that I was a 'superwoman', that I was strong, powerful or brave, and that ‘YES! We can have it all!’.

But the thing is, I wasn’t working from my hospital room because I was driven or committed, or even wanted to ‘have it all’. (I am and I do, but that wasn’t why I was working.)

I was working because I run a small business. I am the sum total of the 'we' that I write in emails to my clients, and my baby was due at the end of the financial year, and the end of financial year was an immovable deadline for my client.

So, there I was, typing away only hours after a (very traumatic) birth, and I got the job done. My client was none-the-wiser.

Behind the scenes, I was wrecked. 24 hours after the birth, my husband took our newborn to a breastfeeding class in hospital ('the only single dad in the class!') so that I could put the ‘do not disturb’ sign on my hospital room door and have a handover teleconference with my client.

I’ll admit, I did smile at the comments my client made - they told me my report was exceptional - and I looked around me and thought to myself, 'well, if I can do that then I really can do anything.'

It felt good. Then, literally seconds after hanging up the phone, a doctor burst through the door (the ‘do not disturb’ sign doesn’t apply to the doctors) and I realised how badly that call could have gone.

In the weeks following, I realised how difficult it was to work while bouncing a baby in his bounce chair with my foot, underneath my desk.

When he started to walk at only nine months old, working while he was awake became impossible and I became a master at switching gears from mum to business owner and back again during his nap times.

In the months and years that followed, I realised what it meant to be a mum. How significant the moment of becoming a mum had been. How much it had changed me and my priorities. How much strain I had put on myself taking on that project at that time. How much of the joy of those early days I had missed through a fog of stress and pressure. And also how insignificant that project I’d been working on had been, in the scheme of things.

The second time around, I decided I would do things differently. I didn’t regret the decisions I’d made first time, but I also didn’t want to repeat them.

I wanted time away from work to focus on my baby and to be present for him.

In this episode of Me After You, host Laura Byrne talks to Teresa Palmer, Narelda Jacobs, Veronica Milsom and more about work after a baby. Post continues below.

But then, as happens in small business, the staff member who was going to cover for me left my business two months before I was due, I was working on a grant-funded project that had no chance of being finished before my baby was born, and I realised that despite my best intentions, I was back in the position I had been in first time around.

And so, only a couple of weeks after giving birth to my second son, I was presenting a workshop to 200 people who were also none-the-wiser that my husband was walking our newborn around in the pram outside, trying to distract him from hunger.

The minute the workshop finished, I raced outside, found my baby screaming because he had been waiting for me for too long, and I breastfed him in the car, hoping that no one from the workshop would walk past and see me.

You see, when you know the background story to a photograph of a new mum already back at work hours after having her baby, the image it conjures is different to that of a “superwoman”, isn’t it?

It’s not strong, or powerful, or brave. It’s certainly not of someone who has it all. Instead, it’s a new mum, with all the exhaustion and vulnerability that any new mum has, appearing calm and in control above the surface while madly kicking beneath it.

Tessa is a mum of two small boys. She runs a social sector consultancy and is also the designer of a product called Shape Tins.