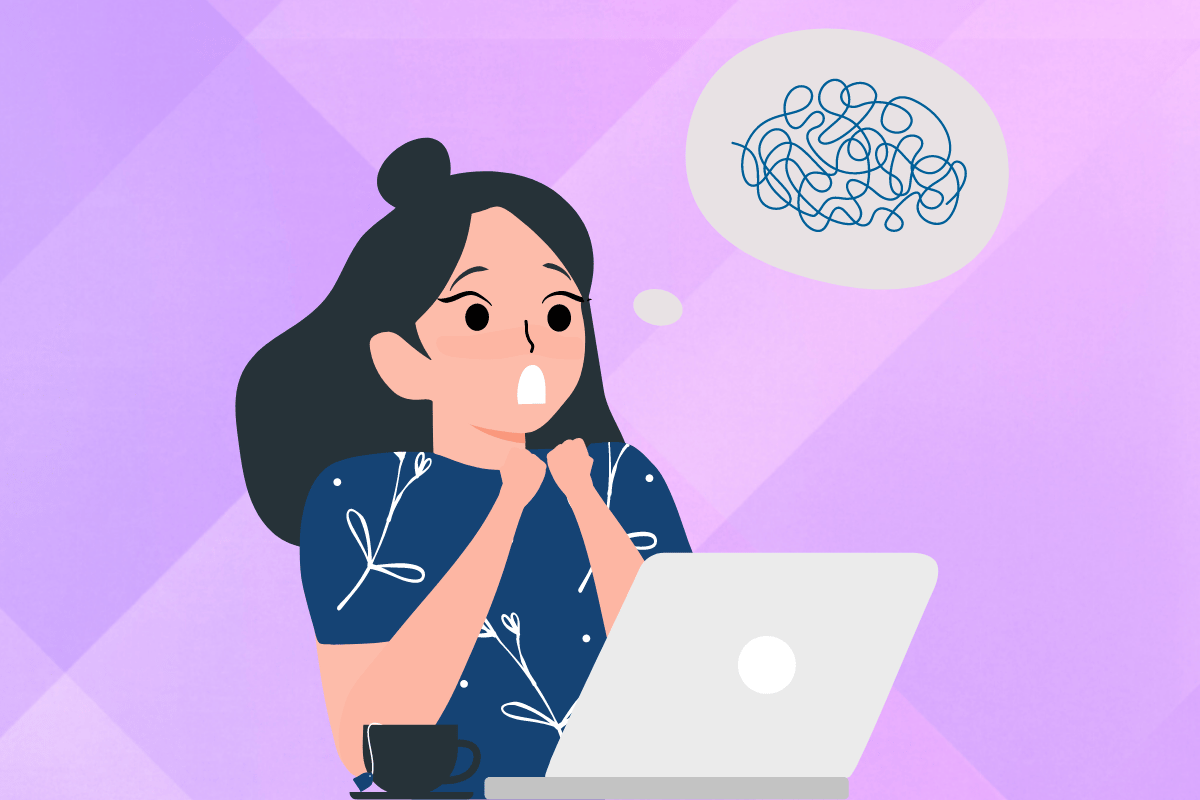 There is nothing quite like the feeling of knowing you have stuffed up at work.

It's humbling, to say the least!

Ultimately, it is pretty impossible to always be working at 110 per cent and constantly making the right work decisions, despite what some motivational speakers on YouTube may tell you.

Which is why sometimes people make... slips.

"I can’t believe I put my night out on the company card."

"Did I really accidentally text my boss that rude message."

To celebrate the recklessness of it all, we asked 21 women for the biggest mistake they’ve ever made at work.

"So once upon a time I pressed the wrong button on a budget I was setting up and I accidentally spent $20,000 in two days. Whoops."

"I forgot I was holding a cider when I put the kids to bed."

"When I was on my gap year I worked in a boarding house. One night, myself and the other gap assistants were having a few drinks before going out on a Monday night, but first we had to put the girls to bed and make sure their lights were out. The next week, a senior teacher in the boarding house sat me down to tell me I’d been holding a bottle of cider when I put the girls to bed. I had no recollection and was completely mortified. For some reason they didn’t fire me."

"My boss at a cafe once asked me to drive her car to pick up ice cream from the supermarket and I almost crashed her car. I was on my P plates and forgot that I had been tasting cocktails earlier (so was essentially drink driving), and I hadn’t put any P plates on."

"I wasted an entire keg of beer and never owned up to it."

"I was working at a bar and went out the back to change a keg. To this day, I have no idea how to change a keg, but I believed in my soul that I’d be able to work it out. I tried and ended up getting sprayed with beer. Eventually, I accidentally knocked the keg over, and beer started leaking out. By this point I was so stressed that I just abandoned the task all together, returned to the bar, said we were out of that type of beer, and never owned up to spilling it. A few months later, someone casually mentioned that some idiot had wasted an entire keg of beer, but they thought it was someone who had left. I nodded in agreement."

"I missed my flight. I was at the gate."

"I missed my flight to New York for work when I was sitting 10 feet away from the gate with my back turned to it."

"I put a coke in the microwave."

"I got fired because we put a can of coke in the microwave to see what would happen."

"When I was 15, I sent job applicants a collective rejection email."

"When I was 15, I worked as a receptionist at mum’s work in the school holidays, and I was given the task of writing back to people who had applied for a job but weren’t progressing to the next stage. It was a pretty standard template email, but I was sending them one by one so I could put their name in. Anyway, my supervisor comes along and is like, 'That’s going to take you ages, just send a blanket email with 'dear applicant' and bcc all the others' but being 15 I didn’t really know my way around Outlook all that well, and accidentally cc’d every applicant so they could see exactly who had applied and was unsuccessful. I got so many angry emails saying how unprofessional it was, and the supervisor (who in hindsight was kinda dodgy) just told me to delete them and not tell anyone. I told mum recently, and she laughed but said it was a pretty bad look for the company."

Watch: The star signs when there's a problem at work. Post continues below.

"I gave a woman a juice filled with plastic."

"I was working at Boost, and I accidentally knocked one of the plastic lids into the ice bucket. Anyway, I scooped some ice into a watermelon crush and blended it and then handed a woman her drink with shards of sharp plastic all through it. She got so angry she threw it in my face."

"My boss found footage of me dancing."

"When I was working in retail, my boss pulled me into her office and made me watch security footage of myself practising Childish Gambino’s This is America music video choreography. She was like, 'The head office thinks your dancing is progressing very well, but you should really be using this time to lock up the store.'"

"I ended up ankle deep in cement."

"On my first day at a new school, I was touring the classrooms that had just been newly built and I walked out onto our new balcony and ended up ankle deep in fresh cement. I also set off the fire alarms while showering before school after the gym and had to evacuate with my hair full of purple shampoo."

"I sent 80 people an email addressed to Hugo Weaving."

"I was a receptionist at a big wig acting management company and part of my job was to forward on invites to events. I thought I’d make it easier by bcc-ing the big list I had and sending the one email to everyone. Unfortunately, I didn’t realise that the invite was personalised so about 80 people got an invitation addressed to Hugo Weaving."

"We didn’t have any Wi-Fi at my house, so we used my work phone to hotspot my three kids and the au pair during the school holidays while I was working. I ended up being in the top three highest data users in the company, which includes remote exploration sites. It cost the company about $70,000. Whoops. Needless to say I no longer have a work phone."

Listen to 8 Minutes To Change Your (Work) Life. Post continues after audio.

"I got my maths very wrong."

"I bought 20 2×2 metre canvases, blowing the budget and being somewhat questioned when the massive delivery truck arrived. I wanted 20 20×20 centimetre canvases."

"I sent my psycho boss a text not meant for her."

"I started a new job, having quit the last one because of a psycho boss. Let’s call her Mary. Six months later, I sent a very rude text about her to a friend of mine, also named Mary. Only I sent it to – you guessed it – the psycho ex boss, who reported me to our professional standards body and complained to my new employers. Eleven years later, I seem to have survived, but I still break out in a cold sweat thinking about it."

"When I worked at Boost, it was my first time closing by myself. The next day I came into work and the manager was really annoyed, because when she arrived in the morning, the till, full of cash, was just... sitting on the counter. I hadn’t put the tray back in the till, basically."

"I accidentally put my client's competitor's number on an ad."

"I’m a graphic designer and I once did a newspaper ad for a bank and accidentally put another bank’s phone number in it. It was only one digit different. Needless to say our client wasn’t happy!"

"I walked into the wrong treatment room - it was a Brazilian."

"I accidentally walked into the wrong treatment room at work... while my boss was doing a Brazilian wax on a client. Thank god the client was a regular and saw the funny side of it. My boss didn’t have to tell me off because she knew how absolutely mortified I was."

"I got the invoice wrong."

"I was doing up an invoice for a customer and somehow put the wrong bank details on the invoice. I had two numbers around the wrong way. I then had to explain to the very important customer that I had messed it up and asked if they would mind paying it again. Thankfully, the other one bounced back, and they paid it into the right account."

"I ordered way too many swim tops."

"As a junior working for a large swimwear company, I made a calculation error on a production cutting order and there were hundreds of extra size 14DD pink tops cut. Luckily for me, the colour went well after being in the catalogue and it wasn’t too disastrous, but at the time I was mortified at my stupidity."

"My boss caught me having sex with her son."

"To be fair, my boss is a family friend. But when she caught me having sex with her son (same age as me, in our early 20s) at her home, it was extremely awkward. And she must have told someone, because now the whole office knows and gives me sh*t for it. And given the son is quite attractive and well admired around the workplace, I felt a few knives in my back from other colleagues who were feeling a bit jealous..."

"I stole the executive's shortbread biscuit. And he found out."

"I know this doesn't sound like the world's biggest mistake, but in this guy's mind, I was done. He had asked that I go out of our office building and buy him a coffee. He could have done it himself. But alas, I was asked to do it, and since he was one of the most senior members of staff - and I wasn't - I said sure. But I ate the little shortbread that came with his coffee. He must have already been to that cafe before, so he asked me where was his shortbread biscuit when I arrived back at his desk with his coffee in hand. I just said I had eaten it, because I knew I had been caught out. It was mortifying."

Do you have a disastrous work mistake story? Share your experience in the comments below!

Reply
Upvote
To be fair, the bank one is the banks own stupid fault for having a phone number so close to a competitors, I’m sure that there would be plenty of customers who would make that mistake themselves over the years if they are that close!
S
Snorks 3 years ago

Most of these seem more or less fine (not that you can't still be mortified!)
No. 1 doesn't seem right though, you don't generally spend money when you're doing a budget, it's simply allocating where things are going to go.