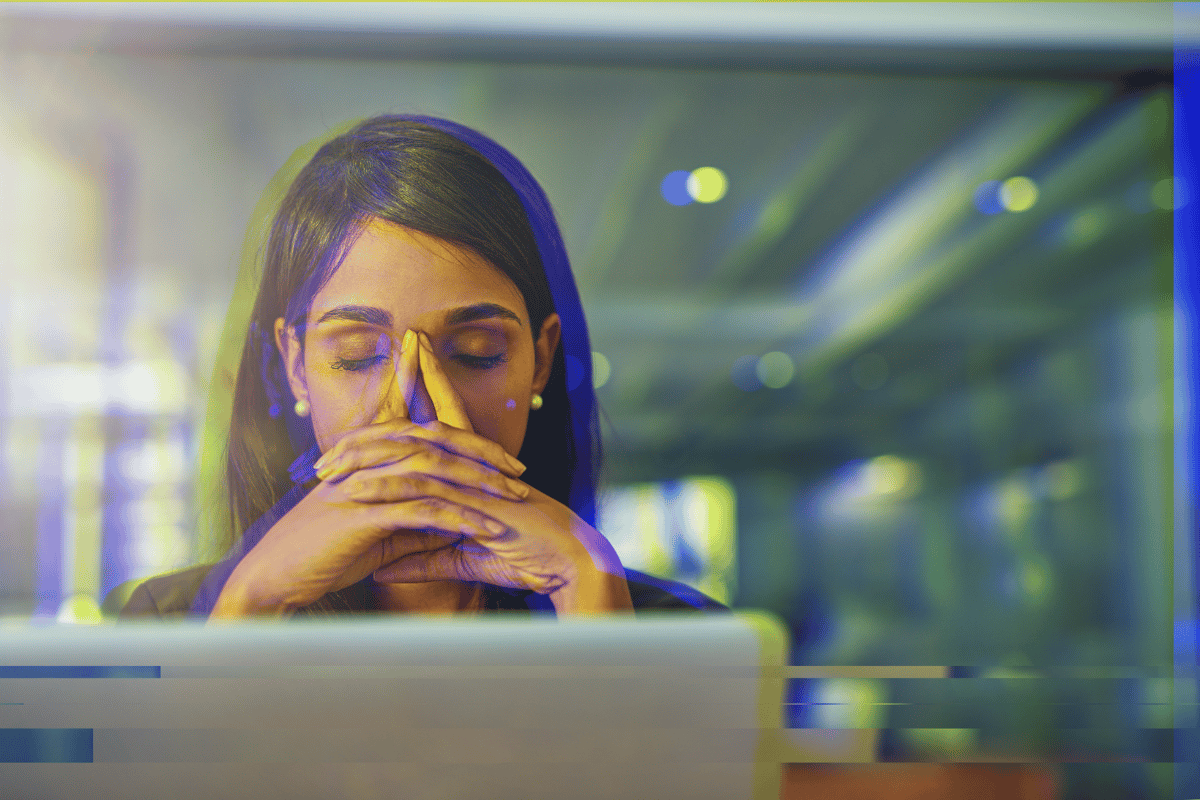 Mina* is a woman in her 50s working in a customer service delivery role. She earns a good wage, she works from home and her colleagues are lovely.

But the workload is overwhelming.

To the point where she has started to see the signs of depression seeping in. And she's been left wondering how to pick up the pieces.

"As someone who has experienced serious mental health before, I know the signs," Mina tells Mamamia.

"I know I can't completely blame my employer for how I'm feeling. But with the intense workload on top of my shoulders, I just don't know what to do or who to turn to. And given my specific workplace doesn't have mental health support services in place for employees, I'm left wondering if quitting my job is my only option out."

Watch: How to talk to people with anxiety. Post continues below.

The Indicators of a Thriving Workplace Report has found that one in five Aussies feel their work has caused or worsened a mental health condition.

Michele is someone who understands how challenging it is to work in a stressful environment. She was a registered nurse with the Royal Australian Air Force for almost 20 years, and was discharged in 2017 predominantly due to her PTSD diagnosis.

For the time that she was part of the Australian Defence Force, Michele was deployed to a number of high-risk locations including East Timor, Iraq and Afghanistan.

Throughout her career she was often thrown into a state of "hyper-vigilance". And that, along with the confronting things she witnessed, left her struggling to cope as the experiences piled up.

"I struggled on, trying to prove to everyone that I was okay. I was saying to myself, 'I won't show that I'm vulnerable, I won't show that there's anything wrong with me, because I'll lose my career'," Michele tells Mamamia.

Listen to No Filter: The resilience guy was not okay. Post continues after audio.

"It all became too much when I was posted away my social support, away from my medical support and unable to access the necessary support when it was needed. It was a really overwhelming experience.

"During my last deployment, I worked in the resuscitation bays, ICU and was evacuating ill and injured ADF personnel which was very stressful. And then add onto that having to be hypervigilant about my personal safety and enemy attacks on the bases. It took a toll."

Four years on from being discharged, Michele says she is in a much better place mentally. But she also wishes that the system hadn't forgotten her in the first place.

"Army makes up for 50 per cent of the ADF. We often forget about the nurses, doctors, medical assistants, logistics staff, administration members amongst so many other support staff and the effects of the job and environment on them too," she says.

"I can't speak to the mental health support other ADF members are provided today, but my personal experience was that I needed better support both from the organisational level and directly in the workplace to help me recover."

It's experiences like Michele's that highlight the need for greater mental health support in the workplace.

Sandra Surace – a Workplace Mental Health and Wellbeing Consultant at SuperFriend – says it's important for organisations to have a holistic approach to mental health.

"While there is no 'one right way', leaders who adopt a proactive and consultative approach with their teams are more likely to see positive outcomes," she explains to Mamamia.

"It's about a holistic approach to preventing harm and managing risk, promoting the positives and supporting people in need."

Of the high percentage of Aussie workers who experienced a mental health condition in the last 12 months, the vast majority identify as female.

Georgie* also knows how it feels for a job to leave her in a poor emotional state. In her mid-20s, she was working in marketing at a reputable company she loved. But it was her direct manager who made her life "a living hell".

When she landed the job, Georgie was ecstatic – it was an organisation that were doing amazing things and had a fantastic reputation, and she assumed the office culture would be the exact same – empowering and supportive.

It was far from that.

"There were toxic red flags from my direct manager from the start. She would constantly take credit for my work and then bad-mouth me or drop passive-aggressive comments in company-wide meetings. She also told me there was no reason for me to leave work on time because I 'didn't have children to look after at home', so I should be pulling more weight and staying back after everyone else," Georgie shares with Mamamia.

It was at this point that Georgie's colleagues told her the three previous girls who were in the role before her had quit – the longest lasting three months in the job. 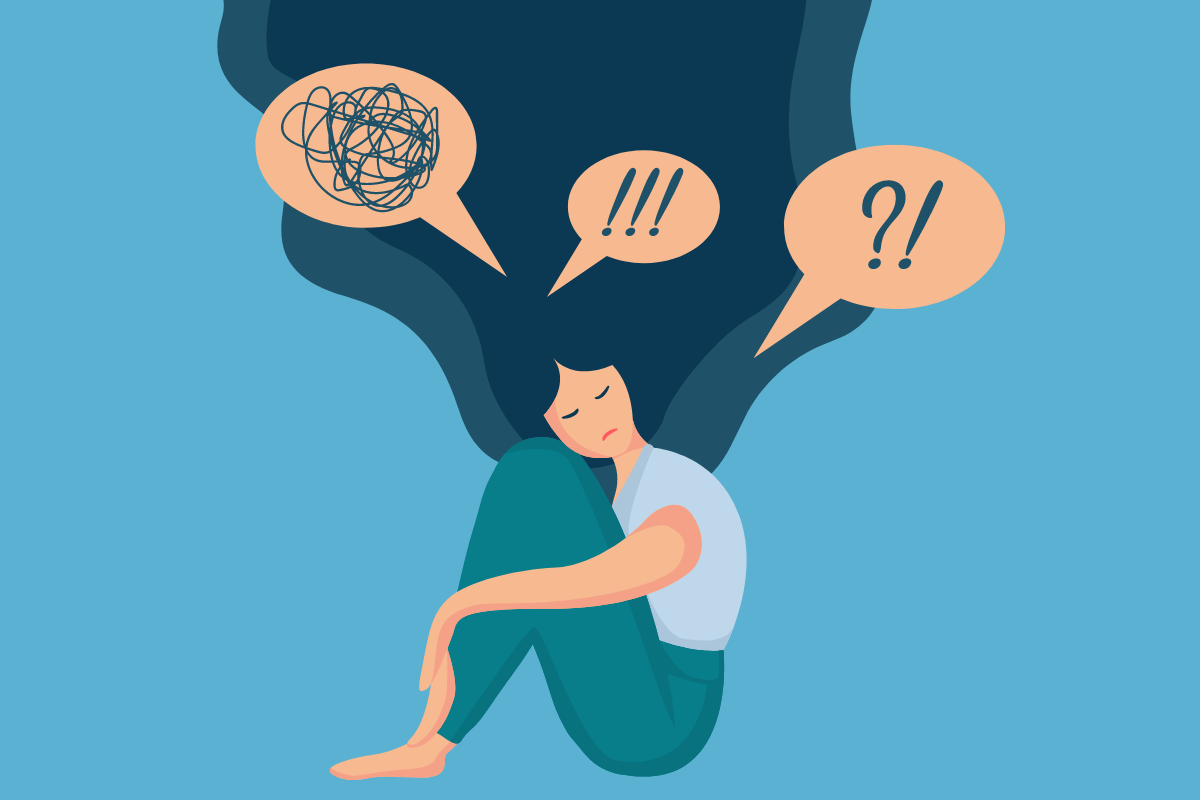 Image: Canva. Georgie's manager had no boundaries and would message her at night, on weekends, the first thing in the morning, on annual leave days – you name it. And if Georgie didn't respond within minutes – even in the instances she was technically not in office hours – a barrage of question marks and URGENT subject lines would follow.

"One time I was actually at the hospital after my partner had an accident, and my manager had sent an 'URGENT' message," she says.

"I hadn't seen them as my phone was in the car, but when I returned I replied and told her the situation and she said 'NOT GOOD ENOUGH'."

In the early days of the job, Georgie managed to keep on top of her work and mental health. But when her anxiety levels were at an all-time high and her periods stopped, Georgie knew something needed to change.

"This had never happened to me before, but when three periods in a row never rocked up, I went to the doctor. They ran all the checks and then asked me whether I was experiencing 'extreme stress'. I said no, but then they asked me about specific symptoms and I ticked every box," Georgie tells Mamamia.

"They said it was likely that my periods had stopped due to the anxiety I was developing from work. They ordered me to take time off work, and I did – but my manager just messaged me incessantly, like always."

At this stage, Georgie knew that leaving her job was her only option. So she started looking for other work opportunities.

"When I landed one, I had to hand in my resignation to my manager. She obviously reacted awfully, but it just felt like justification for why I was getting the hell out of there. She then told me I wasn't allowed to tell anyone else that I was leaving, and that it was her right to share the news."

Her manager announced then Georgie was leaving in a last-minute a team meeting. But at the same time, the manager decided to take a loud phone call – in the open-plan office – to talk about Georgie's replacement in front of everyone. Yelling down the phone, the manager said: "Let's find someone decent this time. Someone with real skills and real dedication. Not like the last idiot we hired."

Reflecting on that experience, Georgie tells Mamamia, "It f**king sucked, but I knew there was light at the end of the tunnel because I was leaving. After I left the business there was a walkout of sorts, with six employees quitting in quick succession over the following two weeks. It seems we were all suffering."

The fact some people are mentally suffering at work to this degree that is sobering to hear. But as Sandra Surace from SuperFriend said to Mamamia, it's a win/win when employers look to improving the mental health of their employees where they can.

"[Mental health] initiatives are mutually beneficial, proven to boost productivity and profits, and improve employee retention – an area that is especially important as industries muddle through a talent shortage," Sandra explains to Mamamia.

"With the end of the financial year around the corner, it’s the perfect time for businesses to spend their remaining budget on critical areas like mental health and wellbeing initiatives, and be open to adapting their business to the evolving needs of the workforce."

For Mina, Michele and Georgie, they hope that no one else has to experience what they have.

"I know so many people who experience stress at work, and a healthy amount of stress is to be expected sometimes," Mina tells Mamamia. "But there is a stage when stress turns into overwhelm, and then overwhelm leaves you feeling hopeless. I don't want any worker to be feeling hopeless in their role. It's not a fun position to be in."