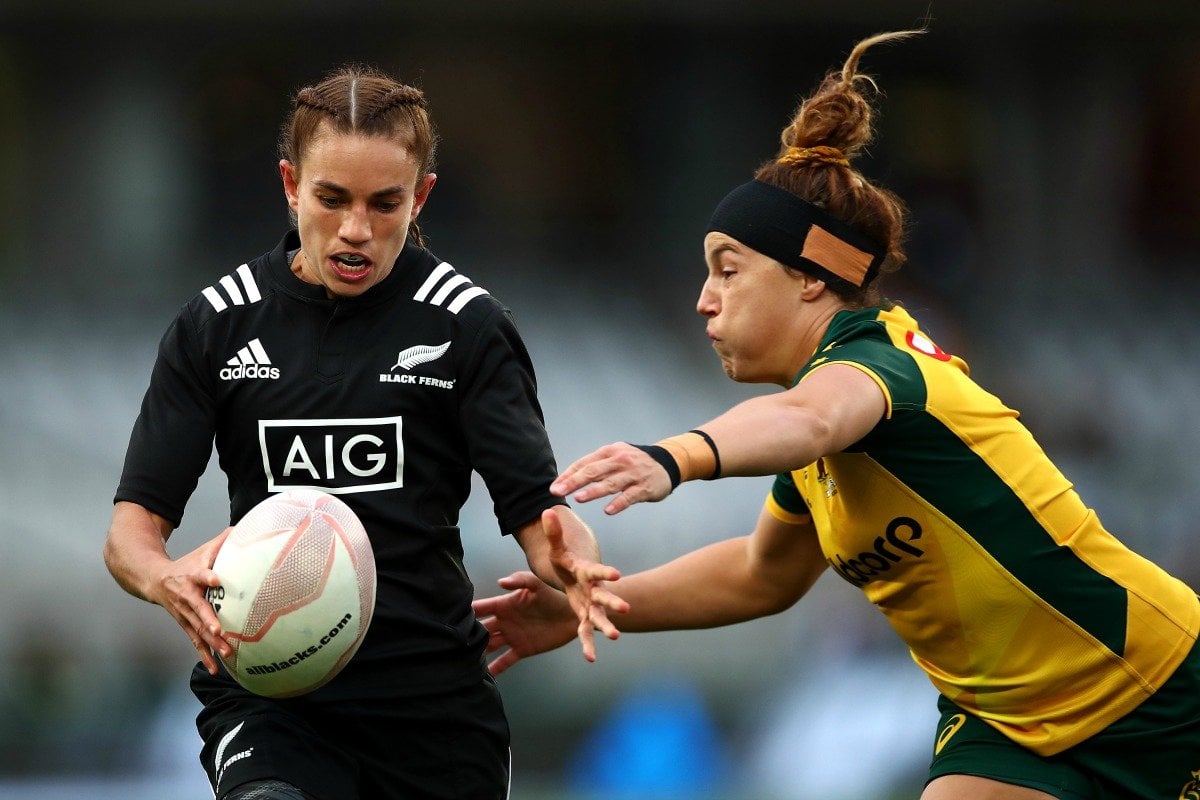 It's been a few months since I had a conversation with two of my male friends over a beer at the pub about sport - and I still think about it often.

Actually, 'think' is too mild a term. I bristle with annoyance and anger about that conversation, often.

You see, my two 'woke' male friends, who are both in their 30s, who are in loving, equal relationships with women, who live in the centre of Sydney, and who consider themselves relatively progressive on topics like equality in the workplace... have a huge blind spot when it comes to women's sport.

Watch: The fact that ads like this even have to exist, is proof of how far we've got to go. Post continues after video.

As they told me on that Sunday afternoon at the pub: "Women's sport is just not as interesting as men's sport, it never will be - it's just a fact."

Their reasoning was that they like to watch athletes at the "top of their game" and biologically that's always going to be men. "That's just a fact", they reiterated.

A few drinks in by this point, I tried to argue with them. But it was two against one, and the more flustered I got, the more insistent they got that my "argument was piss-weak" and a "cop out".

Girls in sport defy gender stereotypes and social norms. By teaching girls teamwork, self-reliance, resilience and confidence, sport is one of the great drivers of gender equality. #DayOfTheGirl | #GenerationEquality pic.twitter.com/4etjhDlX5q

I had tried to reason with them that sure, men are stronger. But sport isn't just about strength, and women's sport offers so many other physicalities and mental tactics that make it just as, if not more interesting, than a men's game. And besides, in some sports skills like agility, time management or team work are what make an elite athlete - not brute strength.

I tried to point to the fact that women hadn't even been allowed to be an integral part of the workforce until the 1940s, and we're still, in 2020, fighting against a sexist system and a gender pay gap that is systemically built to shut us out.

They got that. They agreed with that. But they simply couldn't comprehend how the same parallels are true for women in sport. That we've been subliminally taught that little boys can run and jump and kick, but little girls are weak and just 'not as good at it'.

Just like once upon a time when we were told we didn't have the right skills or temperament for the workplace.

Women's sport has never been given the money or resources to be able to get the same sponsorships and ticket sales as the men's games. How could my friends be so blind to the hypocrisy they were peddling?

Much of women's sport is still in its infancy. Every year it's a fight to get female teams the resources that will help them pull a crowd or a coach. Most of the time female athletes are working a second job just to pay their bills.

Look at women's cricket, for example. On March 8, 2020, a record crowd of 86,000 turned out for the Women’s Twenty20 World Cup final thanks, in part, to a concerted marketing campaign.

With a bit of money, promotion and visibility, suddenly women's sport wasn't so hidden, and the fans came in droves. Imagine if we gave the same kind of attention - AKA the attention men's sport gets every single game - towards female sport?

Of course, the physical crowd was one step in the right direction. But at the same time, Channel Nine opted to broadcast the packed out match on its secondary channel instead.

But that day in the pub, no matter how many arguments I threw back at them, these kind, young, inner-city living men were adamant, and I left feeling completely deflated.

I always knew there were people who felt this way. I guess I just didn't expect it from the progressive young men I live my life alongside.

But you just have to look to the double standards of Tayla Harris' kick being torn apart in 2019 or the fact that female sports presenters like Erin Molan are chastised daily for reporting on a game "they don't play" while sitting next to men who haven't played it either.

Our patriarchal society might be slowly letting equality seep into certain spheres. But it seems there are lots of men who aren't quite ready to let the 'ladies' in on 'their' sport.

How as a society can we expect to move towards true equality for men and women when even the younger generations are blind to the double standards they're vocalising?

My two 'woke' friends weren't even ready to listen to my argument. They consider themselves set in their ways.

If that's where their heads are at, I fear we've got an even longer road ahead than I naively thought.

Is equality for women's sport going to be something I witness in my lifetime?

Reply
Upvote
I’m not a footy fan, so I can’t comment there, but I love Basketball and I’d much prefer to watch a women’s game than a men’s. Men are way too showy, trying to one up each other, women tend to play a smart, tactical game that is more enjoyable to watch, in my opinion, and in the opinion of many other Basketball fans. Your “friends” are wrong.
cat 19 days ago

Reply
Upvote
Sure, men are generally faster and stronger than women. Women are more flexible, more agile, have better reflexes and much better balance. As women’s sport rises in funding and prestige those advantages will be explored (as sport has explored male skills for centuries) and in a few decades I’m quite sure we will see many women smashing records set by men.
Oh and our pain threshold is through the roof.
guest2 18 days ago

Reply
Upvote
6 upvotes
@cat I doubt it   The women playing AFL have had a much higher rate of injuries and some sports are about sheer muscle strength.   The pain of childbirth is unique but a ruptured cruciate ligament or a bone fracture is equally as painful and no respector of sex.
snorks 18 days ago

Reply
Upvote
@guest2 of course they have a high injury rate, the game has been developed for men and they have coaches and physios who learned about men’s sports. But any half decent professional will learn to do better for women.
I’m not suggesting that women won’t feel injuries, but pushing against light physical pain in training is an advantage and women have a higher ability to do that.
guest2 17 days ago