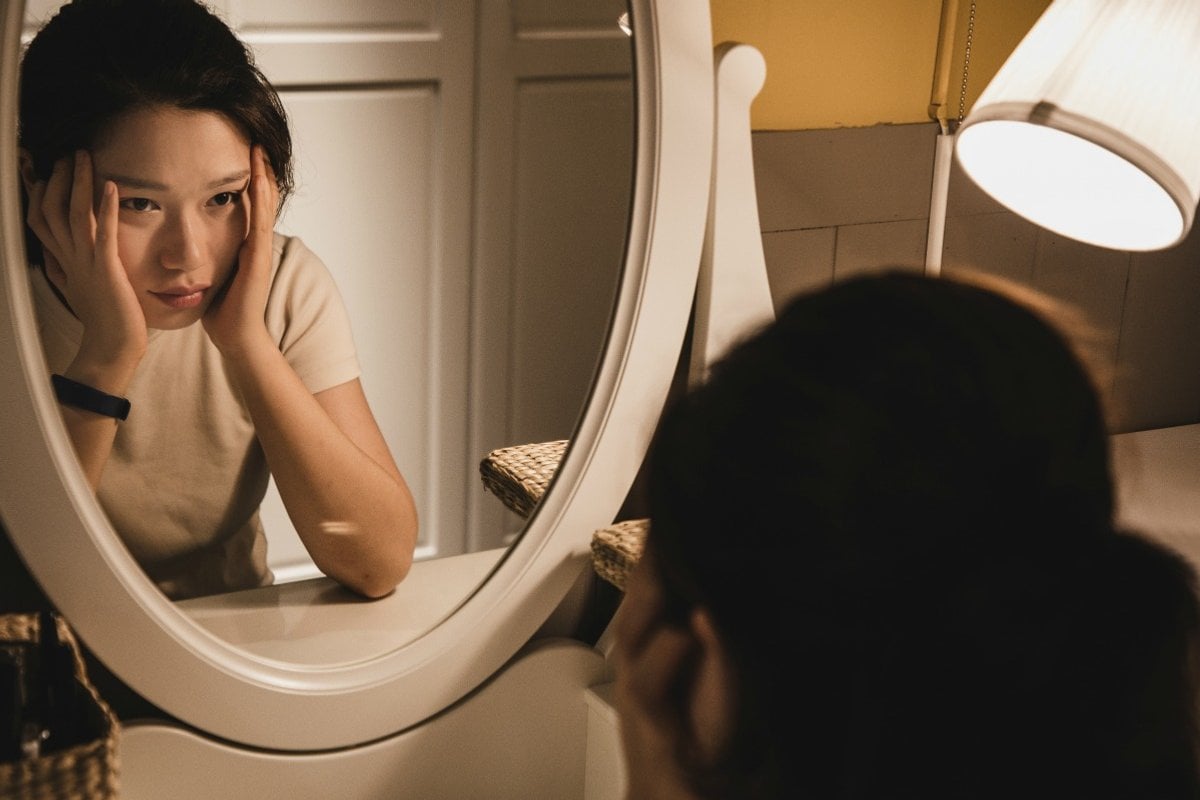 Fact: Everyone has THAT thing. That ~awkward~ thing you did ages ago that makes you want to go back in time and just punch yourself in the face. Y'know.

You think about it right when you're about to go to sleep. When you're washing your hair. Boiling the kettle. Sitting at the bus stop. When you've had a really good day, and you're all like, "nothing can bring me down!"

Watch: To prove ALL of us are such freakin' awkward beings, please watch this interview with Lady Gaga and Ryan Seacrest. Post continues below.

To gift you the beautiful reminder that we all do some dumb things, we've asked a bunch of women to tell us the most cringe-worthy thing they've done.

"I was on my first overseas work trip and we were in South Africa (I know, I'm incredibly lucky to even be writing that sentence) - but I was shitting myself. At the start of each day we'd all have a meeting run by the big boss (at 3am...because we were working on Aus time) and each team would give their update. On my first day, when it got to me, he said, "Welcome Lily!" and before I could speak I fell sideways off my chair, with a full cup of coffee and spilt it all over his computer keyboard. I still think about how awkward I am now."

"My sister Clare and I were 11 and we were having a family Christmas at our house with, like, 40 people. And I turned to my Mum and said, "I think Clare and I should perform 'My Heart Will Go On' by Celine Dion for our family."
We dressed up in my grandmother's nighties (????) and sang on a back step. Like, really seriously. I still don't know why mum let us do that."

"I was on a team with a close male friend of mine in a game of Articulate at a friend's place a few months ago. There were eight of us there, four couples. This friend I was teamed up with, his name is Matt and - full disclosure - I have kissed him before, but we're just good friends and have been for years. His relatively new girlfriend was also at the table.

My husband, also named Matt, was at the table too. A few hours into the evening, we were all pretty drunk, and we were getting competitive with the board game. At one point, my team mate Matt (who I was sitting next to), looked up at me and was like, "What...are you doing...?" I realised MY HAND WAS ON HIS LEG!!! Like, a couple leg-touch thing you do with your ACTUAL partner. I started crying (of laughter and because I was so mortified) and he eventually told everyone that yes my hand was actually on his leg and I'm probably still in love with him.

I have never lived it down but also had huge psychological internal thoughts like how/why?! His girlfriend was pretty chill about it. My husband was like...that was weird. It was so awkward and I still reflect on the sequence of events and question myself."

"I was crossing the road to my car and spotted my ex walking close by (for context: not on good terms. I would go as far to say on terrible/awful/bad terms). He had definitely seen me and naturally I pretended not to see him. In my fluster and haste to get to the car, I accidentally got in the back seat instead of the driver's seat and so I sat there on my phone as if I'd done it intentionally. I think about it more than I care to admit."

"When I first starting seeing my boyfriend we were hanging out with a group of his friends (who I was not very close to) and we all decided to go for a swim in the middle of the night. There is this one particular friend who I always seem to have awkward coincidences with that would very much paint me out to be 'going for him' - but I'm absolutely not!

Anyway, we're all just chilling and I decided to swim up to 'Hayden' - my boyfriend - and wrap my arms and legs around his back. I sat there for a solid five seconds before the guy said, "Where's Hayden?" who was on the other side of the pool. It was early days, and it was so awkward and everyone still makes jokes about it. I'm just glad I didn't go in for the kiss because that would have been irrecoverable I'm sure."

"Waitress: Hope you have a great meal!
Me: You too!"

"When I was in year 10, my friends and I went to go hang out with a bunch of boys for the first time (which was v exciting because...boys). I was wearing a pleated mini skirt. We were all hanging out at Baskin-Robbins, sitting in a booth getting ice creams and chatting. When I walked up to pick my flavour I didn't realise that my skirt had flipped up, revealing my undies to everyone there. Worst part is that I thought the boys were whispering and giggling because they liked me."

"I freaked out and panicked when I had my interview with my now-boss. For some reason curtsied at the end... I have no idea why my brain thought that was the right thing to do. It haunts me..."

"When I was fresh out of uni and working as a junior fashion writer, my dad convinced me to go for a job several pay grades above me as fashion editor of a NATIONAL NEWSPAPER. I think he was trying to teach me something at the time, but I look back on it as the single most horrifying moment of my life. I talked up my limited experience and got an interview, and when they escorted me into the room I sat down opposite a panel of six powerful editors and proceeded to tell them how I went to Fashion Week once. After I left, I realised I'd left my bag in the room so I had to GO BACK AND GET IT. I think about this most days."

"Once I was out with a group of friends and my friend, Estelle, introduced me to a couple of her mates and when I shook their hands (way before COVID), I said hello my name is Estelle...."

"One time when we were moving offices we needed a heap of stuff to be dropped off at Vinnies. I said that I could do it because I was from the country and could definitely reverse my boss' big 4WD out of the tiny carpark with lots of big concrete poles around it. But I couldn't. And I ended up scrapping her entire mirror. And then I had to tell her and I worked myself up into such a state. She was fine. But I just think of my confidence of, "I can drive a big truck in wide open spaces, so I can defs drive your car" and I cringe."

"My first few weeks in my first 'proper' job after university, I answered the phone and the person on the other line asked to speak to "Anthony" and I said, "Sorry, there's no Anthony that works here" to which he responded...Anthony Fitzgerald, the CEO? Anyway, my new boss had to have a word with me about it - but everyone called him Fitz, so I didn't know what his name was!"

"I applied for a script editor job on the soap Hollyoaks when I had one year of writing experience. I couldn't work out why I didn't get an interview until a few years later, and now I die of embarrassment about it on the daily."

"When I was fourteen, I went with a group of friends (and a coupla fellas!! OoOo!) to Botany Big Splash, wearing my fancy new BROWN Billabong bikini. I was generally a one-piece speedo swimsuit kinda gal, but I had these new boobs, so I was *stoked*. I remember coming off the big water slide and immediately looping around to get back into the queue (you had to walk through this grass area with huts etc.). My friend was trailing behind me, and as I made my way towards the stairs to join the line, I could feel people looking at me. Like, staring.

I was genuinely smitten because I thought it was it was just their reaction to me in my cute new 'kini. I turned around to see where my friend was, so I could give her a 'backage' (a move that involves one skipping their place in a line). She was three people behind me. I called her over and she pushed through the line, and whispered, "Sam. Your boob is out." I looked down and the bikini triangle was pulled across the middle, exposing my entire left boob. I hadn't felt a THING."

"When I was about 10 years old, I was having crazy stomach pains at school and had to go home sick. I stayed off school for a couple of days, and the pain didn't go away - like, it was excruciating. My mum got worried that it could be appendicitis, so she ended up taking me to the hospital and we went straight into emergency. After seeing a doctor, they immediately took me in for an X-ray. Turns out I was just heavily constipated. The X-ray just showed, like, a huge poo in my small intestine. I think both me and my mum (who is a nurse, god bless her) probably think about this as often as each other. I still have the X-ray."

Do you have a cringe-worthy moment you need to get off your chest? Share it with us in the comment section below. Do it! Do it! Do it!