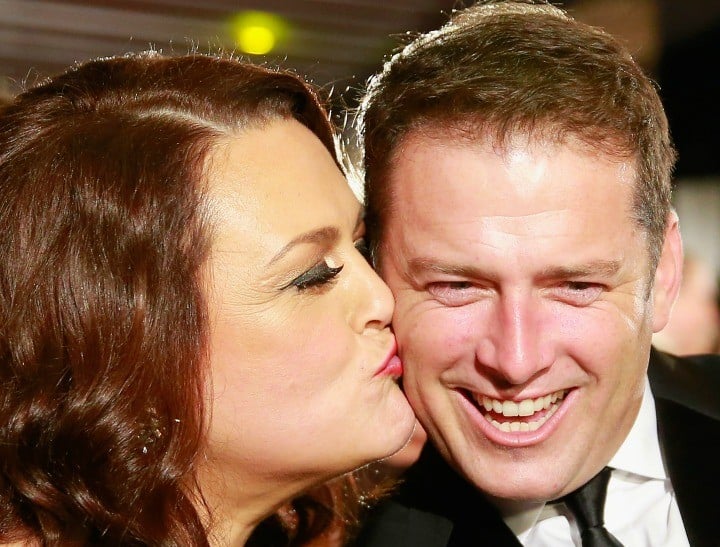 After Bickmore won the gold logie, her acceptance speech paid tribute to her late husband Greg Lange, who died of brain cancer, and called for awareness of the illness.

The Cancer Council reports that 1,700 Australians are diagnosed with brain cancer each year. For more information on this disease, visit the Cancer Council’s website here.

There’s one thing you can say about Australian TV’s “big night” – it never gets any shorter.

But just as we were about to get cynical about the TV Week Logies – an ocean of boobs, Home And Away accolades and questionable performances by imported talent – the incredible Carrie Bickmore won the Gold Logie and made a perfect and moving speech.

The Project‘s Carrie used her speech to pay tribute to her late husband, Greg Lange, who died of brain cancer in 2010. In her speech, she spoke of the toll his illness had taken on him, and asked that her win raise awareness for support of brain cancer charities.

“I want to talk to you about brain cancer,” she said.

“Every five hours, someone is diagnosed. It kills more people under 40 than any other cancer. In 2010, my husband Greg was one of the unlucky ones.

“Over 10 years, he lost feeling down one side… he was a great father.

“I want to get the nation talking about brain cancer. Eight out of 10 people who are diagnosed will die from this disease.

Earlier in the night, Carrie had accepted the Silver Logie for Most Popular Presenter, and had made reference to her own current happiness. She thanked her partner, Chris Walker, and the “perfect little human” they have made together, daughter Evie, now almost two months old.

But during her impressive speech for Gold, Carrie pulled on a beanie – something not many Gold Logie winners have done before her – and asked that on Monday, TV presenters around Australia do the same to raise awareness for brain cancer and started the hashtag #beaniesforbraincancer.

Her initiative has been widely praised already.

It looks like today will be the day the nation recognises the dreadful disease of brain cancer. With presenters like Lisa Wilkinson pledging to wear their beanie.

As the celebs wind down from last night’s party the real work now beings – that of raising awareness #beaniesforbraincancer.

The night was also about Julia Morris.

One of our favourite funny ladies  stole the night by screwing up her award speech in glorious, J-Mo style, which prompted Lisa Wilkinson to Tweet…

I vote @Ladyjmo to host the #Logies next year! Gotta love live TV!!!

So, we had a little cry, we saw the dresses. We saw the celebrities. Now it’s time to look back at who won those strange looking statues.

Most Popular Actor: Steve Peacocke, Home And Away.

Most Popular Drama Program: Home And Away.

Most Popular Entertainment Program: The Voice.

Most Popular Reality Program: The Block.

And if you want to look through the red carpet outfits from this year, we’ve got you covered. CLICK THROUGH:

Dove Invisible Dry has been proven to leave no white marks on 100 colours. It glides on clear for 48-hour odour and wetness protection and contains ¼ moisturising cream to help nourish your skin.

Carrie is just awesome, love that she used her speech for something important. Secondly, how on earth do you look like that eight weeks after having a baby, I'm in awe of the "bounce back" mums. My second has just turned 2 and only now am I even starting to get back in some shape.

She is truly one of the most amazing women. Her dress was absolutely stunning and that speech brought tears to me eyes! #CARRIEFORPM :P