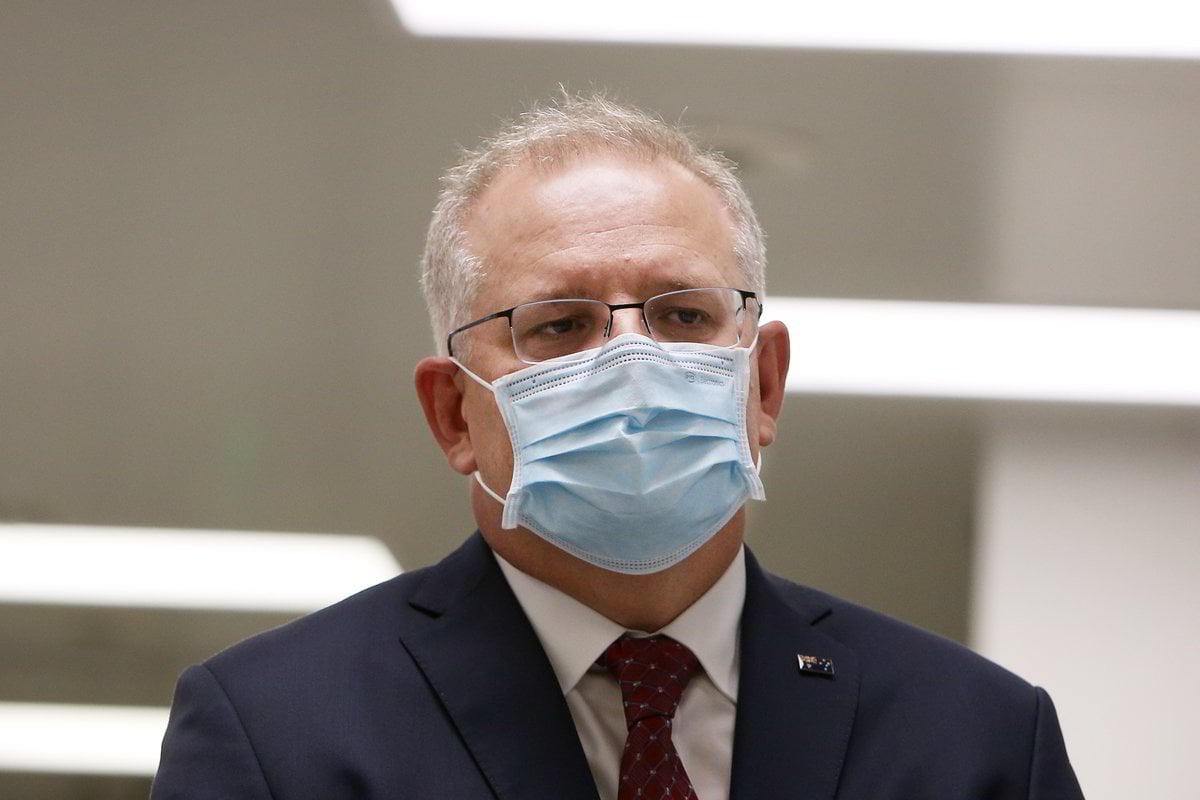 "I would expect [the COVID-19 vaccine] to be as mandatory as you could possibly make it."

Those were the words of Prime Minister Scott Morrison, speaking to 3AW on Wednesday morning, about the vaccine that will put an end to the coronavirus pandemic.

"There are always exemptions for any vaccine on medical grounds but that should be the only basis," the Prime Minister continued. "We need the most extensive and comprehensive response to this to get Australia back to normal."﻿

"It is not going to be compulsory to have the vaccine," he told 2GB by Wednesday afternoon. "There are no compulsory vaccines in Australia.

"No one is going to force anybody to do anything as a compulsory measure, but we certainly will encourage people to take this up."

Listen to The Quicky, Mamamia's daily news podcast. On this episode, journalist Claire Murphy finds out the latest on the coronavirus vaccine. Post continues below.

Morrison's comments come as Australia is a step closer to securing a potential coronavirus vaccine after the government struck an early agreement with developers in the UK.

But the Prime Minister's comments about it being mandatory have triggered a national debate about the safety of the potential vaccine.

Yes, conspiracy theorists and anti-vaxxers tend to go hand-in-hand whenever there is talk about vaccinations. But as journalist Waleed Aly pointed out on Wednesday's The Project, this isn't necessarily about pro-vaxxers versus anti-vaxxers.

"I feel like we need to stop this being an anti-vax/vax argument," Aly said, in conversation with epidemiologist Professor Tony Blakely about the pros and cons of such a quick turnaround of the coronavirus vaccine.

"We're seeing in the polling data, there is a significant number of reservations, and that's not about anti-vaxxers. You know, these are people who are pro-vaccination but might have a concern in this particular case," Aly explained.

"Vaccinations are normally tested for long-term side effects - so you give people the vaccination and then you check five years later and see if there are any side effects. That's clearly going to be impossible to do this time."

Aly asked the epidemiologist if this is cause for concern.

Watch: Waleed Aly on the reservations of some Australians to receive the coronavirus vaccination. Post continues below.

"We're moving fast as a world here," Professor Blakely admitted, adding that some developers for the coronavirus vaccine are in phase three, meaning only early-term results are known so far.

"We'll be getting this vaccine rolling out to populations about six months after these trials, with only early-term results. So the long-term side effects won't be known," Professor Blakely said. "And that's a risk that is there."

"But we can draw on information from other vaccines, which generally show that if you're going to have an adverse reaction from a vaccine, it's early in the case and not long-term down the track."

Deputy Chief Medical Officer Nick Coatsworth has said officials will work to reassure Australians the vaccine is safe and effective.

So, what is the latest on the COVID-19 vaccine?

On Wednesday, Scott Morrison said he has put Australia's hand up for a coronavirus vaccine being trialled by Oxford University and British drug company AstraZeneca.

Under the deal, Australia would make and supply the vaccine - should it prove safe and effective - and provide it free to all Australians.

"The Oxford vaccine is one of the most advanced and promising in the world, and under this deal we have secured early access for every Australian," the prime minister said.

Morrison admitted there was no guarantee the vaccine would be successful, so the government was continuing talks with other parties as well as backing Australian researchers.

The Oxford University trials are under way in the UK, Brazil and South Africa and are due to soon start in the US, running into early 2021.

Rebecca Ashfield, who is an Immunologist at the University of Oxford, recently wrote for The Conversation: "The preliminary data shows that it is safe and induced a strong antibody response in all vaccinated volunteers, suggesting that an effective vaccine could be within reach...

"Importantly, the vaccine demonstrates an acceptable safety profile, with no vaccine-induced severe adverse events – that is, no major side-effects."

Reply
Upvote
2 upvotes
It’s worth noting that this vaccine is being developed quickly because of the completely unprecedented resources and international collaboration involved. When the Oxford vaccine is cleared for distribution it will have passed just as many checks as every other vaccine we take. Generally vaccines are verified by duplicating experiments- one lab will test a vaccine On animals, find it works, then duplicate the results 5 times. That takes a few years. The Oxford vaccine was still tested 5 times, it was just done concurrently- in the 5 best facilities in the world, including in Australia. Human trials will also be done all over the world to check for any rare reactions before it goes to market.
C
cat 2 years ago

Reply
Upvote
2 upvotes
These vaccines also arent being created from scratch- they’re taking existing bases that have been specifically designed to deliver proteins to the immune system to create a response, and then adapting them for this virus. These are the same models we use for flu vaccines. And Covid is about 90% the same as SARS, so the vaccine for SARS gave us a huge head start (it was never released to market because the pandemic ended and interest subsided, but it was in the late trial phases before it was shut down).
In regards to long term effects... this isn’t actually something we have for any vaccine when it’s created. We don’t do 25 year trials for vaccines, or any drug. But since vaccines are just creating an immune response from the body, there’s almost no way to create an issue that wouldn’t be revealed in the very short term. The same way if you have chicken pox you’re unlikely to have a complication from that virus 25 years later. It’s not nearly the same thing as medications which people are taking repeatedly and that are introducing chemicals to the body on an ongoing basis.
On a scale of risks to human health, the vaccine will be way lower than the risk we take by getting in a car.
A
ange23 2 years ago