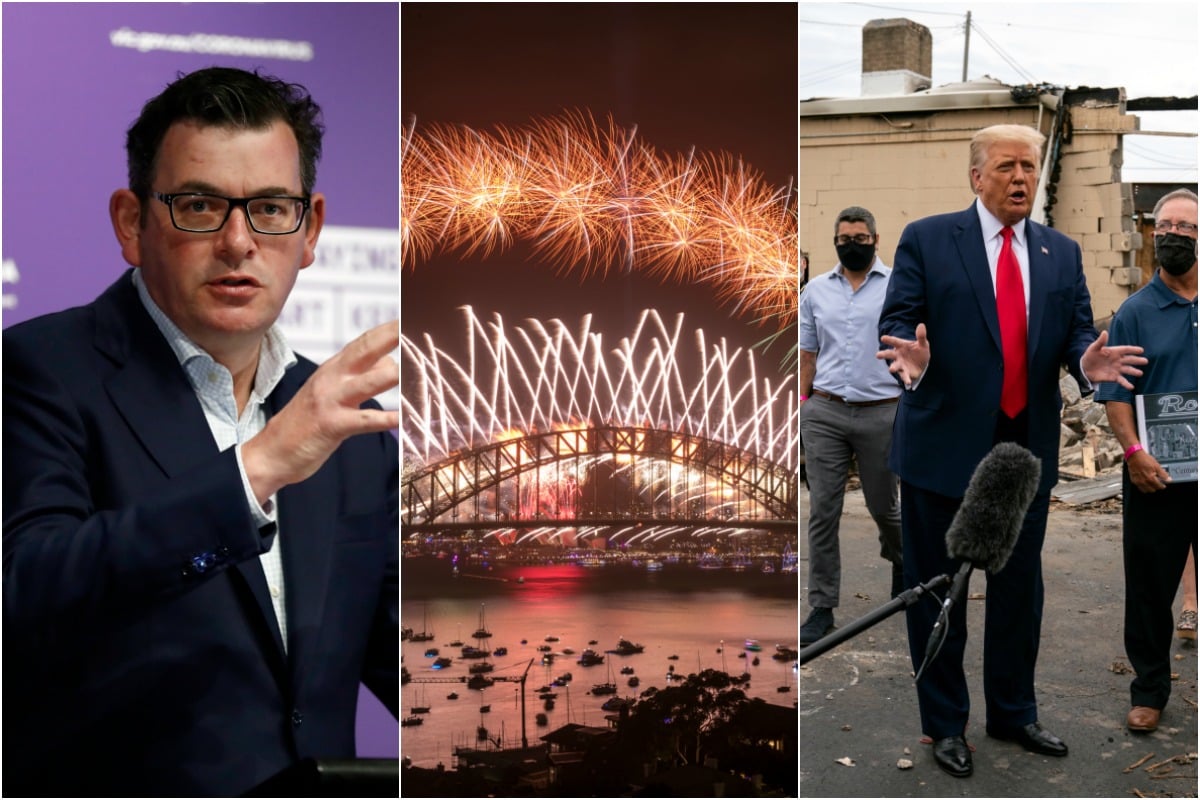 Prime Minister Scott Morrison has once again made it clear he would like COVID-19 border restrictions eased across the country in time for people to see their families at Christmas.

During Question Time yesterday, Morrison said Victoria had "turned a corner" and that states and territories need to start planning to reopen to the rest of the country.

"By Christmas, Mr Speaker, we should aim for Australians to be able to go to work, to be able to be with their family at Christmas, and to return to visit their friends and to look forward to a positive 2021," he said.

It's a desire Morrison has expressed a few times, but yesterday was the first time Victorian Premier Daniel Andrews hinted that this could actually be a possibility for his currently locked-down state. 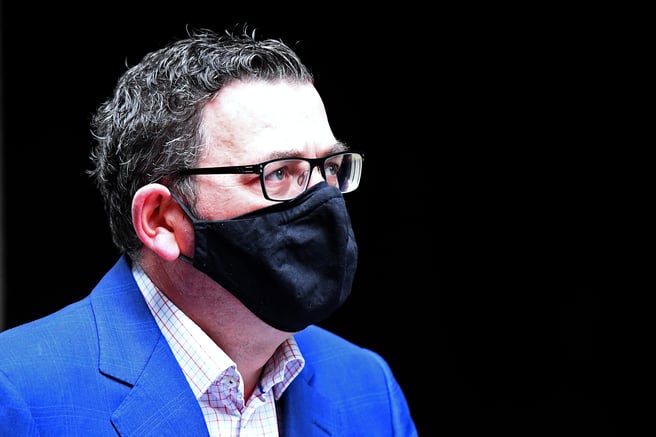 Andrews, like Morrison, is aiming to ease border restrictions in time for Christms. Image: Quinn Rooney/Getty

"I think we all want to aim towards a situation where, come Christmas time, come the summer in earnest, we can have that freedom of movement," Mr Andrews said.

The premier is still days away from revealing his roadmap for Victoria, but numbers continue to drop. Only 70 new infections were recorded yesterday.

NSW Premier Gladys Berejiklian warned Melbourne-Sydney travel would only be considered if cases were under control and Victoria's contact tracing was improved.

"As soon as we feel the risk is low or negligible to NSW, we're keen to re-establish our connections," she said.

Former Prime Minister Tony Abbott has made his opinion on restrictions clear in a speech to the Policy Exchange think tank in London.

"Now that each one of us has had six months to consider this pandemic and to make our own judgments about it, surely it is time to relax the rules so that individuals can take more personal responsibility and make more of their own decisions about the risks that they are prepared to run?" he said.

The leader of the Nationals in the Senate has also criticised the border approach, accusing state governments of being "city centric" and failing to understand the needs of regional Australia.

Senator Bridget McKenzie approves of a plan to agree on a hotspot approach on coronavirus outbreaks, rather than hard borders.

READ: The ‘traffic light’ system and how it could reopen Australia.

A six-month extension to the Victorian government's state-of-emergency powers has passed parliament after a surprise intervention by the Greens.

I wasn’t going to be at Parliament today as I'm on maternity leave. But there are 2000+ active COVID cases in Victoria and we need to work together right now to defeat the virus. I’ll vote for a 6-month extension so the CHO can quarantine COVID cases and keep us safe. #springst

"I felt it was just too important that I had to be here," she told reporters as she arrived at parliament with two-month-old Malala.

The bill passed just before 2am on Wednesday, with 20 votes in favour and 19 against.

Australian workers officially have wage subsidies locked in until next year as the nation's first recession in almost 30 years is set to be confirmed.

Figures for the June quarter are expected to show the worst economic growth in at least 60 years, with a contraction of around six per cent because of the coronavirus pandemic.

The data will confirm a technical recession, after a 0.3 per cent decline in gross domestic product in the March quarter.

Treasurer Josh Frydenberg will unveil the figures on Wednesday, after earlier arguing the numbers wouldn't be as bad as other countries.

Legislation splitting JobKeeper wage subsidies into a two-tiered system and extending the program for another six months have breezed through parliament, with the $1500 flat fortnightly rate to end later this month.

The government has passed an extension to JobKeeper but the extension will see less money in people's pockets. #9News pic.twitter.com/HxJjmqPMXt

People who worked less than 20 hours a week before the crisis struck will be paid $750 a fortnight from the end of September, while all others will receive $1200.

The maximum payment will come down to $1000 from December to March.

The Queensland government has returned to testing for COVID-19 cases linked to a local cluster after a former bikie who arrived on a flight from Victoria sparked a virus scare.

Police are investigating whether 48-year-old Shane Bowden, a former Mongols gang member, made a false declaration upon arriving from Melbourne on Monday.

Authorities are also conducting thousands of tests in a bid to isolate any new cases linked to a 28-case cluster centred on the Corrective Services Academy at Wacol, southwest of Brisbane.

Two new cases — a school student and a nurse — were recorded in the 24 hours to 9am on Tuesday.

The COVID-19 cluster has led to a lockdown of 7000 prisoners in the state's southeast, exacerbating tensions in already tightly packed jails.

In NSW, two Sydney schools will remain closed today after students tested positive to the coronavirus.

NSW recorded 13 new cases in the 24 hours to 8pm on Monday including two in hotel quarantine and 11 that are locally acquired.

Seven of the locally acquired cases are linked to the Sydney CBD cluster associated with the City Tattersalls gym.

Mr Barilaro said the precedent set by the cancellation of major events in regional areas, such as the Tamworth Country Music Festival, suggests large gatherings can't go ahead. 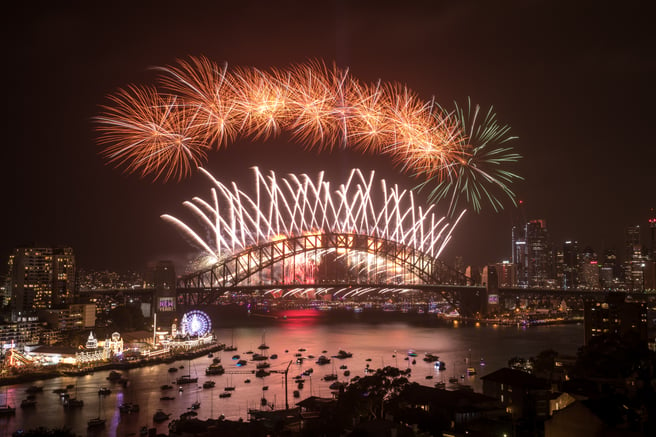 "If the regions have to lose big tourism events like this, then there is no option but to cancel the big draw-card events in Sydney, and the most obvious is the New Year's Eve fireworks," Mr Barilaro told The Sydney Morning Herald.

The Herald cited a source close to NSW Police Minister David Elliott saying there were concerns about how to deal with thousands of people converging on the harbour to see the fireworks.

The fireworks were nearly cancelled last year due to widespread bushfires.

Facebook has threatened to ban news content on its platforms if the Australian government enforces a law that would mean the tech company has to pay media outlets for their content.

"Australia makes laws that advance our national interest. We don't respond to coercion or heavy-handed threats, wherever they come from," Treasurer Josh Frydenberg told AAP on Tuesday.

Facebook said it would stop Australians from sharing news content on its platforms if a proposal to make it pay local media outlets for their content becomes law, a sharp ultimatum thrown toward the Australian government https://t.co/D0rbf9F5js pic.twitter.com/lqUSzSJ6U5

"Assuming this draft code becomes law, we will reluctantly stop allowing publishers and people in Australia from sharing local and international news on Facebook and Instagram," he said in a statement on Tuesday.

"This is not our first choice — it is our last. But it is the only way to protect against an outcome that defies logic and will hurt, not help, the long-term vibrancy of Australia's news and media sector."

3700 public school students in NSW haven't returned to their classrooms since remote learning ended in May, reports the Sydney Morning Herald.

Most of the students are in high school and, according to Fitzgerald, were "teetering on the edge of engagement" even before the pandemic.

The concern amongst the community sector is the long-term impact on young people's health, housing and social connections.

The Gabba is set to be announced as the host venue of the 2020 AFL grand final today.

With Victoria's COVID-19 breakout forcing the state into lockdown, the AFL faced a dilemma of where to play the grand final, which would normally attract around 100,000 fans.

The Gabba is set to be announced as the host venue of the 2020 AFL grand final today, and former Brisbane Lions legend Richard Champion couldn't be happier. pic.twitter.com/0poAnkHkqb

The state governments of Western Australia and South Australia put cases forward to host it, but Queensland was always the frontrunner given the assistance it's provided to the AFL to help keep the season afloat.

It's understood the Gabba will be the venue selected for the grand final, with a capped crowd of about 30,000 slated to attend the October 24 spectacle.

The match is also set to be played at night in another move that breaks with tradition.

Defying requests to stay away, US President Donald Trump has arrived in Kenosha, Wisconsin, to highlight his "law and order" re-election campaign theme in a city up-ended by protests after the shooting of a black man by a white police officer.

Opinion polls suggest the Republican president is narrowing the gap with the front-running Democrat Joe Biden amid ongoing protests over racial injustice and the resulting violence.

Trump's trip to Wisconsin, a political battleground state that he won narrowly in 2016, gives him a chance to emphasise his police-friendly pitch in a state he hopes to keep in his column in the November 3 election.

The state's governor and the city's mayor both urged Trump to avoid Kenosha to prevent inflaming tensions.

But the president dismissed their appeals, choosing to visit one of the flash-point cities where anti-racist demonstrators have clashed with Trump supporters who have converged on protest sites, sometimes openly carrying arms while vowing to protect property from looters.

Heading to Kenosha, Wisconsin, to thank Law Enforcement and the National Guard for a job well done. The Violence stopped six days ago, the moment the Guard entered the picture. Thank you!

A 17-year-old Trump supporter has been charged with killing two people and wounding another with a semi-automatic rifle in Kenosha.

Trump defended the white teenager, who faces six criminal counts, and declined to condemn violence from his supporters.

- The United Nations weather agency says this summer will go down for leaving a "deep wound" in the cryosphere — the planet's frozen parts — thanks to a heat wave in the Arctic, shrinking sea ice and the collapse of a leading Canadian ice shelf.