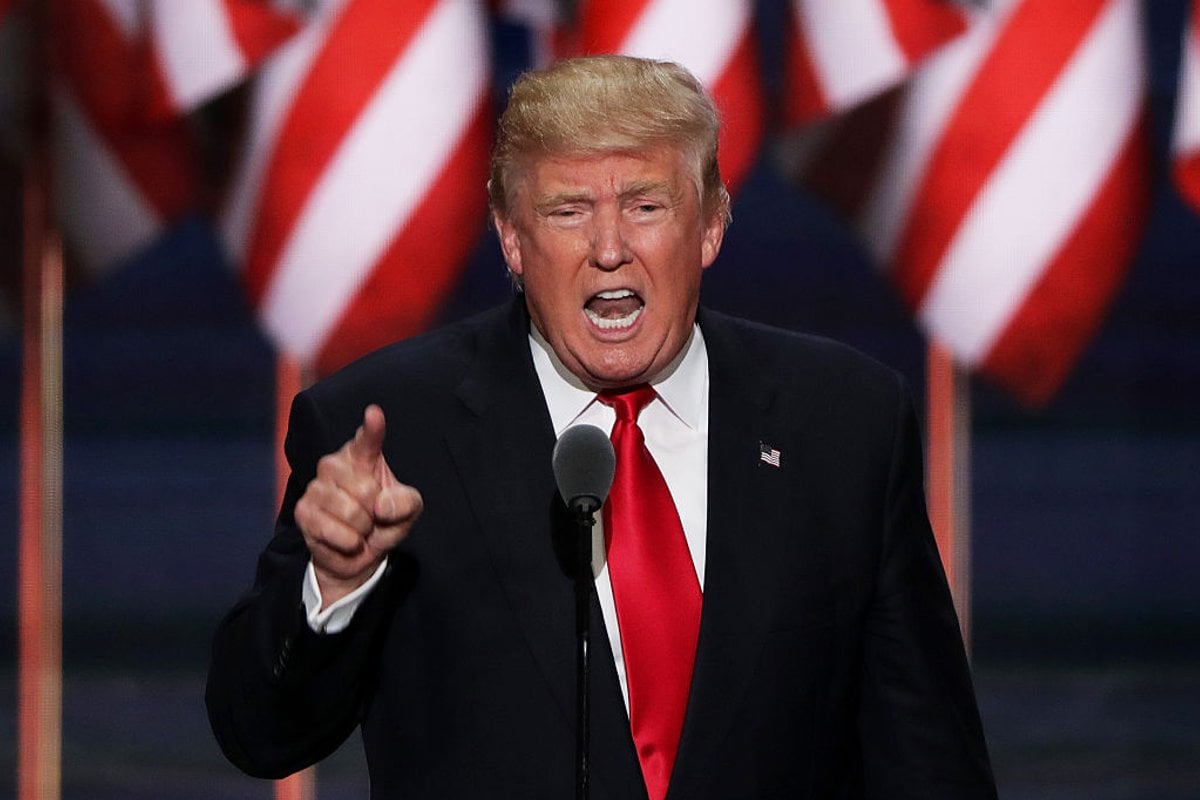 When US President-Elect Joe Biden and Deputy Vice President-Elect Kamala Harris gave their victory speeches on Saturday evening, local time, the tally of Electoral College votes showed they had decisively passed the crucial 270-vote threshold, delivering them to the White House this January.

Tradition dictates the losing candidate also gives their own speech to concede defeat. But their vanquished opponent, Donald Trump, hasn’t done that.

We cannot psychoanalyse Trump from a distance, though I am sure many of us have tried. We can, however, apply psychological theories and models to understand the denial of defeat. My area of research — personality psychology — may prove particularly useful here.

Now watch Trump address the nation following the US election, where he talks about 'illegal votes' and 'winning' the election.

Reluctance to admit defeat, even when the battle is hopelessly lost, is a surprisingly understudied phenomenon. But there is some research that can help give an insight into why some people, particularly those who display a trait called “grandiose narcissism”, might struggle to accept losing. Put simply, these people may be unable to accept, or even comprehend, that they have not won.

Other psychological theories, such as cognitive dissonance (resulting from the discrepancy between what we believe and what happens) can also help explain why we double down on our beliefs in the face of overwhelming contrasting evidence.

If you think you’re better than everyone, what would losing mean?

Personality traits may provide insight as to why someone could be unwilling to accept defeat.

Narcissism is one such trait. There is evidence to suggest there are two main forms of narcissism: grandiose narcissism and vulnerable narcissism.

In this article, we’ll focus on grandiose narcissism, as characteristics of this trait seem most relevant to subsequent denial of defeat.

People who show hallmarks of grandiose narcissism are likely to exhibit grandiosity, aggression, and dominance over others. According to researchers from Pennsylvania State University, publishing in the Journal of Personality Disorders, this type of narcissism is associated with:

…overt self-enhancement, denial of weaknesses, intimidating demands of entitlement … and devaluation of people that threaten self-esteem.

For the grandiose narcissist, defeat may compromise this inflated self-worth. According to researchers from Israel, these people find setbacks in achievement particularly threatening, as these setbacks could indicate a “failure to keep up with the competition”.

Instead of accepting personal responsibility for failure and defeat, these individuals externalise blame, attributing personal setbacks and failures to the shortcomings of others. They do not, or even cannot, recognise and acknowledge the failure could be their own.

Listen to a bonus episode of Mamamia Outloud where Mia and Amelia Lester debrief on the US election. Post continues after podcast.

Based on the profile of the grandiose narcissist, the inability to accept defeat may best be characterised by an attempt to protect the grandiose positive self-image. Their dominance, denial of weaknesses, and tendency to devalue others results in a lack of comprehension it’s even possible for them to lose.

Why do some people double down despite evidence to the contrary?

In the 1950s, renowned psychologist Leon Festinger published When Prophecy Fails, documenting the actions of a cult called The Seekers who believed in an imminent apocalypse on a set date.

Following the date when the apocalypse did not occur, The Seekers did not question their beliefs. Rather, they provided alternative explanations — doubling down on their ideas. To explain this strengthened denial in the face of evidence, Festinger proposed cognitive dissonance.

Cognitive dissonance occurs when we encounter events that are inconsistent with our attitudes, beliefs, and behaviour. This dissonance is uncomfortable as it challenges what we believe to be true. To reduce this discomfort, we engage in strategies such as ignoring new evidence and justifying our behaviour.

Here’s an example of dissonance and reduction strategies.

Louise believes she is an excellent chess player. Louise invites a new friend, who has barely played chess, to play a game of chess with her. Rather than the easy win Louise thought it might be, her new friend plays a very challenging game and Louise ends up losing. This loss is evidence that contradicts Louise’s belief that she is an excellent chess player. However, to avoid challenging these beliefs, Louise tells herself that it was beginner’s luck, and that she was just having an off day.

Some researchers think experiencing dissonance has an adaptive purpose, as our strategies to overcome dissonance help us navigate an uncertain world and reduce distress.

However, the strategies we use to reduce dissonance can also make us unyielding in our beliefs. Ongoing rigid acceptance of our beliefs could make us unable to accept outcomes even in the face of damning evidence.

Let’s consider how grandiose narcissism might interact with cognitive dissonance in the face of defeat.

Finally, the act of not apologising for one’s behaviour could also be a dissonance strategy. One study by researchers in Australia found refusing to apologise after doing something wrong allowed the perpetrator to keep their self-esteem intact.

It might be safe to say that, if Donald Trump’s denial of the election loss is a product of grandiose narcissism and dissonance, don’t hold your breath for an apology, let alone a graceful concession speech.

Reply
Upvote
2 upvotes
Of course the official election results haven't actually been released yet, just what the media companies believe are going to be the final result, because they've been so trustworthy and above-board in reporting during Trumps Presidency... (do I need a /sarc tag here?)
And let's not forget the last 4 years of media screaming about Russian collusion, election tampering etc etc, but now they want us to unquestioningly accept their word when it comes to the results of this election?
laura__palmer 4 months ago

Reply
Upvote
1 upvotes
@james b so what? Trump announced himself President last time, based off the votes he received, before the official announcement was made, and the media reported this and the media announced him the winner. Hilary also conceded when she realised what the numbers meant, unlike Trump. The media are only doing what they do every single election.
Also, the Russian collusion was exposed as fact. Russian interfered with the 2016 election. There was plenty of evidence. So far there is no evidence of what Trump and his cronies are saying happened this time around.

Face facts, because it's getting sad. Very sad.
laura__palmer 4 months ago

Reply
Upvote
2 upvotes
@james b Also, Obama hosted Trump at the White House on November 10th, as is customary for the outgoing President.
Trump's behaviour is simply unacceptable.
simple simon 4 months ago

Reply
Upvote
5 upvotes
@james b " the last 4 years of media screaming about Russian collusion, election tampering etc"
A member of the Trump campaign (and family) has publicly admitted to accepting and attending a meeting with Russian operatives to obtain dirt on a political opponent. My question: why weren't they criminally charged?
salemsaberhagen 4 months ago

Of course the official election results haven't actually been released yet, just what the media companies believe are going to be the final result, because they've been so trustworthy and above-board in reporting during Trumps Presidency

This is how it's been done for DECADES.  Even here in Australia.  The PM/Premier doesn't wait 2 weeks for the official return of the Writs and formal Declaration from the Australian Electoral Commission.  Funny how you had no problems with Trump claiming victory on election night in 2016.  You only have a problem with it now all of a sudden.  Strange that, isn't it?  And the media has sucked up to Trump for 4 years.  He has had an easy run as like over here, the media in America is overwhelming far right.
News
General
Opinion
True Crime
Politics
Sport
Explainer
Entertainment
Celebrity
Reality TV
Movies
TV
Books
Rogue
Royal
Lifestyle
Beauty
Fashion
Weddings
Home
Wellness
Health
Fitness
Travel
Food
Parents
Before The Bump
Pregnancy
Baby
Kids
Teens
School
Parent Opinion
Work & Money
Money
Finance
Career
Lady Startup
Relationships
Sex
Dating
Separation
Friendship
Family
Real Life
Couples