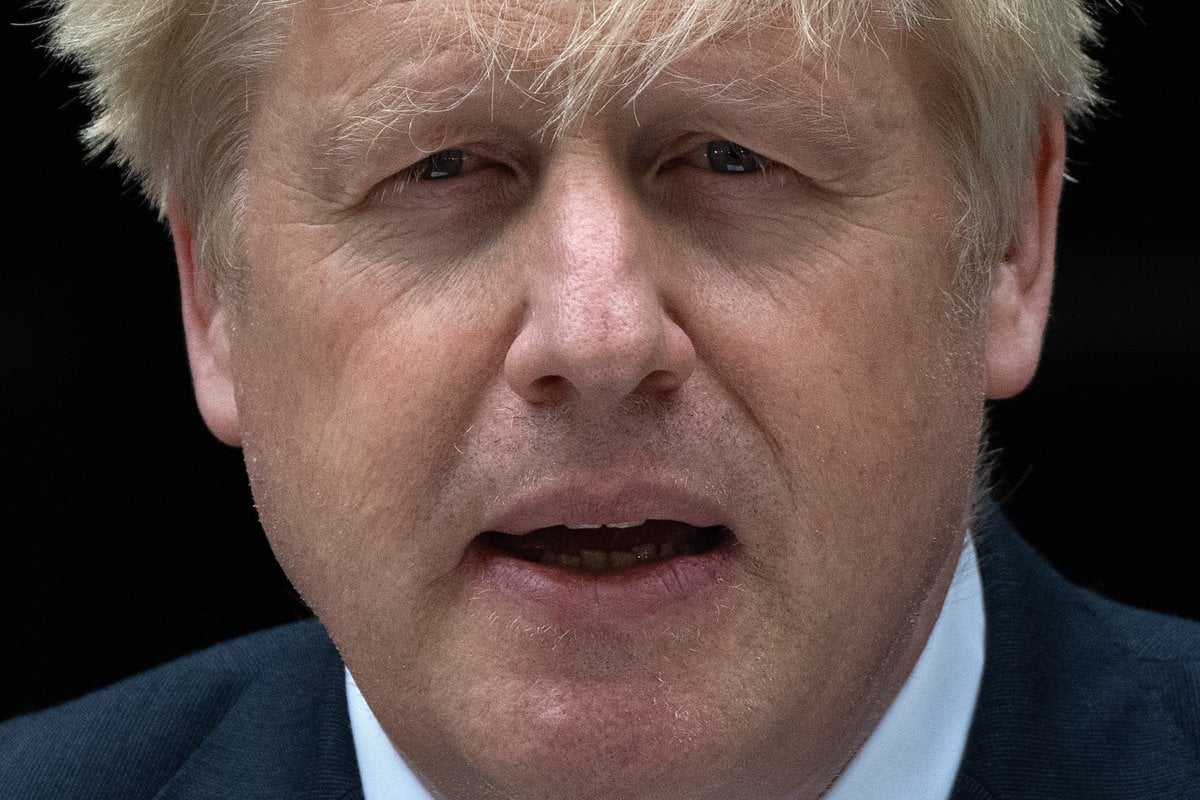 Gosh. Crikey. Whoopsy-daisies, the Prime Minister of Great Britain has got himself into a right old pickle.

If, by pickle, you mean he’s finally had to admit that he is Unfit AF for the job that he has been doing for three years now.

Boris Johnson oh-deared himself into resignation on Thursday after more than 50 - that’s 5-0 - of his ministers resigned within 24 hours, citing no confidence in his leadership.

“I want you know how sad I am to be giving up the best job in the world," he said, outside Downing Street, dry of eye. "But them’s the breaks.”

Listen to Holly Wainwright talking about Boris's resignation on Mamamia Out Loud. Post continues after audio.

It’s remarkable, and tells us all a great deal about the self-belief instilled at Eton College - the top-tier private boys' school that has spawned 20 (that's 2-0, I learned that at my public school) British Prime Ministers - that Boris did not resign when the 14th resignation letter hit his desk. Or the 26th, or the 37th. Not even when one of his closest allies in government, Michael Gove, went to visit him on Tuesday night as the Twitter resignations pinged ever upwards, to say “Hey, old chap, it might be time to, you know..." Boris refused, and fired him.

What is it they say? Channel the confidence of a mediocre, middle-aged white man emboldened by generations of privilege and an expensive education? Something like that. 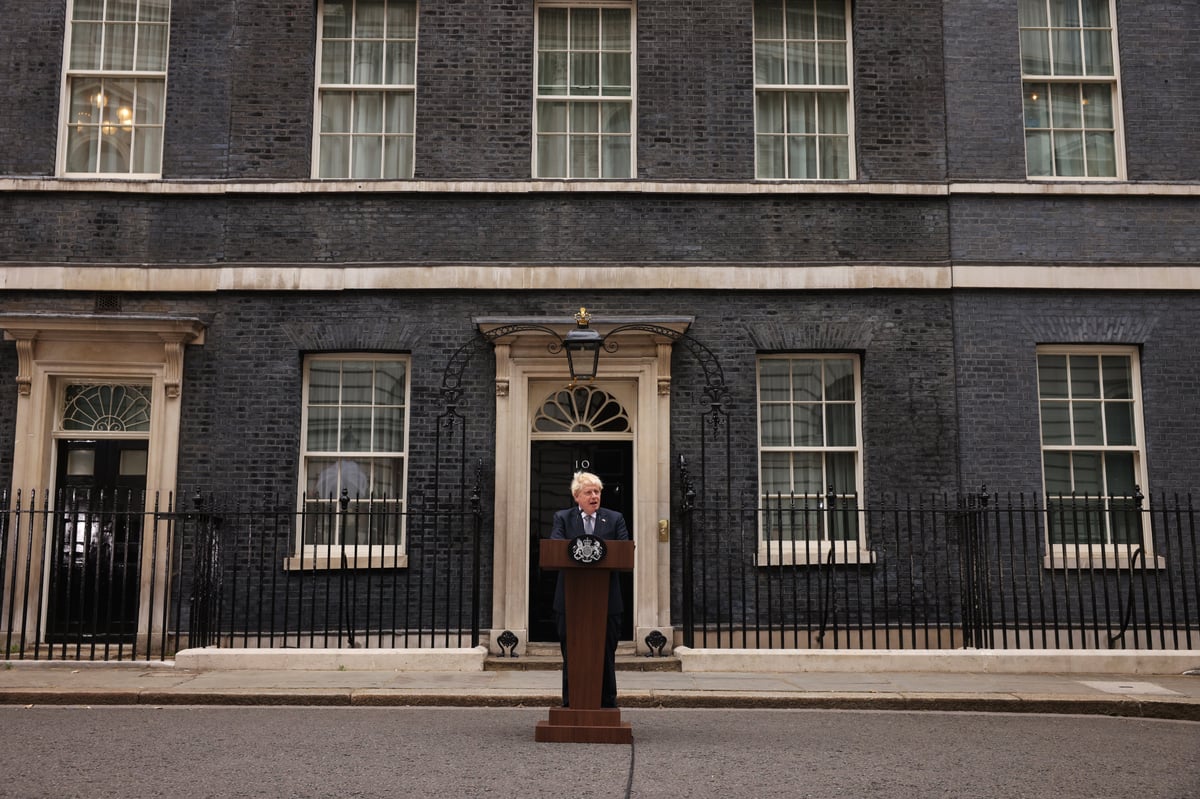 UK Prime Minister Boris Johnson addresses the nation as he announces his resignation outside 10 Downing Street, on July 7, 2022 in London, England. Image: Getty.

If Boris inherited Theresa May’s Shit Skirt - the smelly mess that was a half-done Brexit - it would be fair to say that in the three years since he has fashioned it into an unspeakably stinky, ill-fitting Saville Row three-piece suit. Something with the aura of that rotten dead thing your dog ate in the park and then vomited up on your kitchen floor. Some very stinky trousers, if you will.

And he’s been running around splattering puddles of that mess in every direction over the past three years, as Britain has faced some of its most serious challenges in history. During that time, let's not forget, Brexit was shoved through but is still not finished, and the UK lost more than 200,000 people to COVID. It's been a terrible time, and yet the adjectives you are going to see etched into history as the pre-cursor to the legacy of Boris Johnson, PM, will be 'scandal-plagued'.

What scandal? I hear you ask. Well, we haven't got all day, so let me topline just a few for you. The most recent of which will help you answer the next question: 'Why now?'

Stinky Scandal 1: This week, the 'Pincher affair' came to a head. Christopher Pincher - a Conservative MP and a senior whip within Boris's party - is the subject of complaints of sexual harassment occurring between 2005 and... last week. Almost all of them take the form of him allegedly groping and inappropriately approaching male colleagues and associates while drunk. Boris claimed to have known nothing about Pincher’s history when he promoted and supported him but when evidence that proved otherwise came to light, he had to say: OOPS, that’s right, I’d forgotten, but I remember now, I DID know about that… Terribly sorry, silly old me.

Stinky Scandal 2: It's called Partygate. Over the past 12 months, stories surfaced of the Prime Minister attending and potentially organising several parties at Downing Street and at the private homes of people who worked there. No big deal for the PM to reward his hard-working crew with some cheap white wine and a packet of crisps, right? Well, the problem was, these parties happened in 2020/21 at the peak of Britain's national lockdowns. While the rest of the country were banned from gathering in numbers larger than two, were dying alone in hospital beds and burying their loved ones with the bare minimum of ceremony, Boris was pouring the wine and raising a tinnie in celebration. When first asked about the series of office and garden parties held by Downing Street during this time Boris said, "No, I didn’t do that". Then pictures of him and his senior staff doing exactly that surfaced and he said: OOPS, that’s right, I’d forgotten, but I remember now, I DID do that, Terribly sorry, silly old me.

Stinky Scandal 3: Then there was that time that he and his now wife, Carrie Johnson, decorated the apartment they had just moved into at Number 11 Downing Street, making a few teeny little modifications that ended up costing $200,000. That’s their business, surely. Yes, but the thing was, the Johnsons used a mixture of public money and a hefty private donation from a Tory Lord to do it, which is against several rules. Boris, of course, denied there had been anything other than private funds used to make over the family apartment until a whole formal enquiry was set up - yes, into the cost of gold wallpaper - he copped a fine and had to say: OOPS, that’s right, I’d forgotten where the money came from, terribly sorry, silly old me.

'But them’s the breaks'

As previously stated, we haven’t got all day to shift through the mucusy muck flying off Boris’s strategically undone tie, so let’s just mention a couple of other things Boris forgot until he was caught: Insinuating that his political opponent was soft on child abusers; using public money for expensive private travel and turning a blind eye while senior members of his government blatantly lobbied for causes they were being paid to support.

And then, of course, there's the inquiry into Johnson's handling of the early months of the pandemic, during which he was reported to have said during a cabinet meeting: "No more f**king lockdowns – let the bodies pile high in their thousands."

In short, Boris’s stinky trousers have been worn with the carefree air of a man who has spent his whole life getting away with shit because of who he is, who he knows, and the old school tie. Until last night.

On Tuesday, 69 per cent of Britons told pollsters they wanted Boris to resign and it turns out, most of his own party finally agreed. That sound you can hear is a summer street party being held in a triumphant farewell.

So, DING DONG, BORIS. Take your stinky pants with you into your next chapter, where you will doubtless rake in plenty of money 'consulting' and 'commentating' in the private sector. Because that's how we do things, in Britain, in Australia, everywhere, really.

NOTE: This is an edited version of a segment that ran on Friday's Mamamia Out Loud, where Holly is the entirely unqualified British correspondent, frequently called upon to create clumsy analogies for the bizarre workings of the Westminster system.

M
missmc a month ago

Reply
Upvote
Populist leaders will be the downfall of democracy. Just like everybody else these arseholes surely must meet a criteria to be allowed to govern a nation.
The ridiculous hair do screamed - arsehole dressed up as common peoples. It was a red flag for me. What a disgrace a human being.
L
lisaskeeter a month ago

Reply
Upvote
1 upvotes
Just typed a long comment that was eaten by my iPad!
To summarise I hope that with the exit of this, the third of the triumvirate of buffoons leading English speaking nations, that Britain can be kinder again.
That racists, homophobes, misogynists and whatever the word is for people who think that the vulnerable should be sacrificed so that they can go to the pub without a mask; that those people will be overwhelmed by a renewed national attitude of kindness.
Resources
Very Peri
Skin
News
General
Opinion
True Crime
Politics
Sport
Explainer
Entertainment
Celebrity
Reality TV
Movies
TV
Books
Rogue
Royal
Lifestyle
Beauty
Fashion
Weddings
Home
Wellness
Health
Fitness
Travel
Food
Family
Before The Bump
Pregnancy
Baby
Kids
Teens
School
Parent Opinion
Work & Money
Money
Finance
Career
Lady Startup