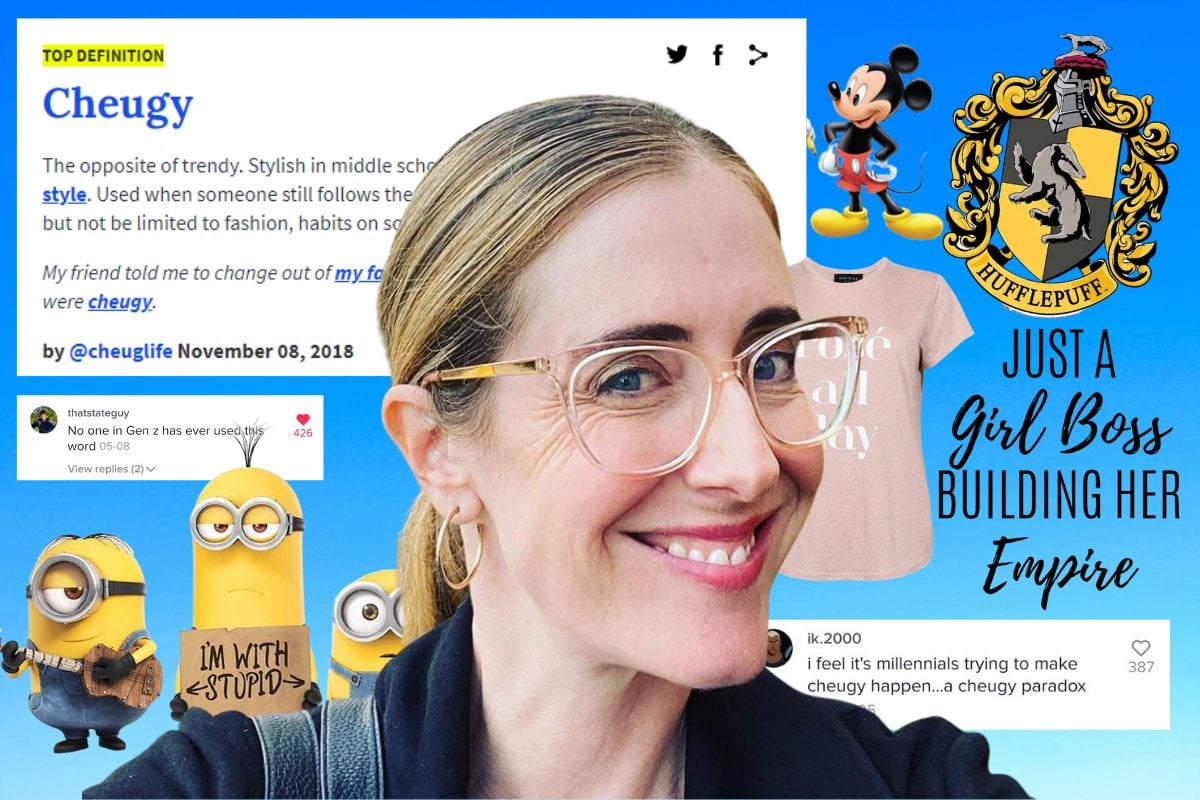 According to numerous news stories and a lot of worried Millennials on social media, Gen Z have complicated rules about what is cool and what is ‘cheugy’.

Skinny jeans and side parts are definitely cheugy and now according to a new unsubstantiated cheugy rule book, so is liking Disney movies; saying ‘rosé all day’ and having wooden signs that say ‘relax’ in your hallway.

The origins of cheugy began on the internet way back in 2013, but the term has gained more notoriety recently as yet another way to poke fun at Millennials.

Side note: Check out the real faces of Millennials. Post continues below.

But really, who is making this cheugy stuff up?

Is it deserving of all the column inches, or is worrying about being cheugy, already cheugy?

I am a tutor at The University of Newcastle and apart from my head actually hurting while thinking about the great cheugy paradox of 2021, I decided to ask my Gen Z students what they thought about cheugyism.

Are they really sniggering behind Millennials’ backs for liking Disney or do they not care?

Eighteen-year-old Luisett felt certain that most of her peers had never even heard of the term, let alone used it to mock a Millennial with.

“I feel like the term cheugy only became popular because of the media coverage,” she says.

“The skinny jeans ‘debate’ got a lot of attention, so cheugy is just a way of creating another generational battle between Millennials and Gen Z.”

The comment section of a "cheugy" video on TikTok. Image: Supplied.

Twenty-year-old Chloe has a similar perspective. She only became aware of cheugy recently when her friend referred to another friend that way due to her obsession with the TV show Friends.

“What I've noticed about the term is that it seems to be mostly just Millennials fessing up to being cheugy because of their common or ‘basic’ interests in things like iced coffee, Friends and Instagram captions,” Chloe says.

“It's mainly generated a wave of (social media) posts by Millennials who are afraid to be reduced down to the term by the newest generation - so they get ahead of it. It's just the TikTok generation's version of being ‘basic’.”

Twenty-one-year-old Hannah hasn’t really given much thought to what Millennials are into.

“I personally don't care if Millennials are into Disney or 'rosé all day',” Hannah says.

“If these things determine that they are 'cheugy' then so be it.

“It may be a way of Millennials trying to be relatable and cool, but who is to determine what’s cool anyway?”

As a twenty-five-year-old young Millennial or older Gen Z, Eleanor had to text a friend to see if she knew what cheugy was.

She recognises that every generation thinks the one above it is cheugy, to some extent.

“I personally think we are making a huge deal out of it all,” Eleanor says.

“We (millennials) did the same thing to Gen X and they probably felt the same as we do now.”

On this episode of Mamamia Out Loud, Jessie, Mia and Holly chat about what makes someone 'cheugy'. Post continues below.

Matteo, 18, had some hard words for Millennials feeling picked on by Gen Z.

“I think the only people who say ‘cheugy’ are Millennials,” he says.

“I believe it’s just to make themselves seem relevant after the surge in popularity of the ‘okay, boomer’ trend.”

Twenty-two-year-old Liza agrees, saying that she only heard about cheugy through a Millennial friend, not her peer group of Gen Z-ers.

“They are trying to stay relevant because Gen Z aren’t really talking about them at the moment,” she says. Ouch.

But let’s get real, young people have been looking on with pity at their older, cheugier counterparts for generations.

I remember seeing ‘old people’ in a pub when I was 18 and being horrified. Who let them in?

Now I am that ‘old person’ in the pub wearing all the wrong things (probably) and I don’t really care.

As a 42-year-old Gen X-er I have had years to come to terms with being comfortable as a cheug, which is perhaps where my Millennial friends are still struggling.

I love writing ‘but first, coffee’ on my Insta posts, because I think it is funny - and not even ironically. I love Disney movies and can recite whole portions of Beauty and the Beast and I am a proud member of House Hufflepuff.

My eldest son is embarrassed of me frequently and that is the way it should be - the circle of life, if you please.

Cheugy, basic, ‘okay boomer’ or just being ‘try-hard’ and daggy – it all adds up to getting older and no longer being part of the most youthful generation.

My son will one day have his ‘am I cheugy?’ moment, just like Gen Z will also have their turn.

Whether or not you love an episode of Friends with your rosé or chuckle at a shared minion meme, it doesn’t matter. You do you, because to your Gen X and Boomer friends – you Millennials are still young and cool to us.

And for the most part it seems that Gen Z aren’t going to be calling you cheugy anyway. They are literally not even watching.

Reply
Upvote
The media can try to create ‘battles’, but Millenials love Gen Z. They’re our natural allies in finally doing what needs to be done to prevent a complete Armageddon.