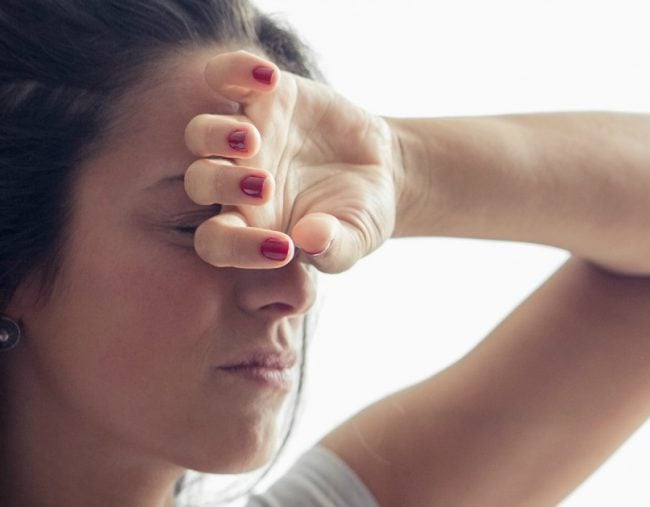 “We’re living in a 25 hour society,” sleep specialist at Sydney’s Dr Levis Sleep clinic, Dr Dev Banerjee, said. And as a result, we find ourselves asking perhaps more than ever before: Why am I so tired all the time?

With so much to do, sleep is often one of the first things we find ourselves sacrificing. More than one in 10 Australians get less than five and a half hours of sleep a night, and no matter how they feel the next day, experts say they will experience serious neurological impacts in the long term.

One side effect that we’re often warned about is the risk of falling asleep behind the wheel. Dr Banerjee said, “one fifth of all motor vehicle accidents are due to fatigue and tiredness,” which is an important reminder of the seriousness of not getting enough sleep.

But there are the four unexpected side effects of sleep deprivation that many Australians might not know about.

Dr Banerjee said a lack of sleep can make an individual cranky, moody and result in their “anxiety levels going up”.

Neuroscientists have found that not getting enough sleep activates the areas of the brain responsible for emotional processing. According to Psych Central, “the resulting pattern mimics the abnormal neural activity seen in anxiety disorders”.

There appears to be a harmful cycle, whereby excessive worriers are more vulnerable to the impacts of sleep deprivation, and also more likely to struggle to get to sleep.

Matthew Walker, Ph.D., the author of a seminal paper published in the Journal of Neuroscience, writes, “This discovery illustrates how important sleep is to our mental health… and emphasizes the intimate relationship between sleep and psychiatric disorders.”

How to know when you’re sleep deprived. Post continues.

According to Dr Banerjee, “from an individual point of view it might be attention, concentration, short term verbal memory, the ability to multitask [that are compromised]”.

Verbal memory is particularly interesting, meaning that the sleep deprived person might not be able to remember the correct words to express themselves in a given circumstance.

A number of studies indicate that a long term consequence of not getting enough sleep is an impaired ability to concentrate and learn.

3. Sleep deprivation and your ability to do your job properly.

Former Australian Prime Minister Kevin Rudd was one of the many world leaders who wore his ability to function on less than five hours sleep a night as a badge of honour.

In fact, Rudd maintained he could get by on just three hours sleep, and had been like that since university. Napoleon Bonaprate and Margaret Thatcher both claimed to only need four hours.

“Margaret Thatcher said she only needed four hours sleep, but there were many pictures of her asleep in meetings,” Dr Banerjee said. “Some people say they sleep five hours a night… that’s pretty much unsustainable in the long term.

“If you’re going below five hours, that will have an immense neurological impact.”

In fact, Dr Banerjee said ‘presenteeism’ was a socio-economic consequence of sleep deprivation because workers aren’t able to get their tasks done.

As much as a leader might like their team to be available for a 6am meeting, Dr Banerjee made the point: “If you are requiring five hours sleep and starting your business meetings early, you’re sort of expecting the rest of your team to follow suit. But unfortunately, this requires the team to have the same comparable sleep. So we need to, as a leader or a company owner, understand the requirements of many of your employees… many of them can’t work on less than five hours sleep.”

The first physical side effects of chronic tiredness one will experience, according to Dr Banejee, is poor nutrition, and feeling too exhausted to exercise.

This can result in a reduction in “exercise capacity and fitness,” and eventually, weight gain.
There are some suggestions, he said, that sleep deprivation in the long term could put you at risk of cardiovascular disease, as a consequence of weight gain.

According to Michael Breus, PhD, “It’s not so much that if you sleep, you will lose weight, but if you are sleep deprived, meaning that you are not getting enough minutes of sleep or good quality sleep, your metabolism will not function properly.” He added, “Gherlin is the ‘go’ hormone that tells you when to eat, and when you are sleep deprived, you have more ghrelin.”

Dr Banejee said the average person likely needs more sleep than they are currently getting. “The amount of sleep you need is the amount you feel you can function in the day without feeling sleep and to recuperate. Some people might need eight hours, and for some people it might be nine hours.”

But, what if you think you might be getting enough sleep, and you still feel tired throughout the day?

“There are a lot of people that are very tired after 10 hours of sleep so they haven’t got a sleep problem, they’ve got a staying awake problem,” Dr Banejee said.

“Many of those will need assessment by a sleep specialist [like Dr Banejee].” It’s important to note as well, that these signs of sleep deprivation might be a result of hidden conditions like sleep fragmentation, insomnia, or sleep apnea.

“It could be the lack of quality of sleep rather than quantity,” Dr Banejee added.

But for most of us, it’s a matter of prioritising sleep, and knowing just how critical it is to our day-to-day functioning.