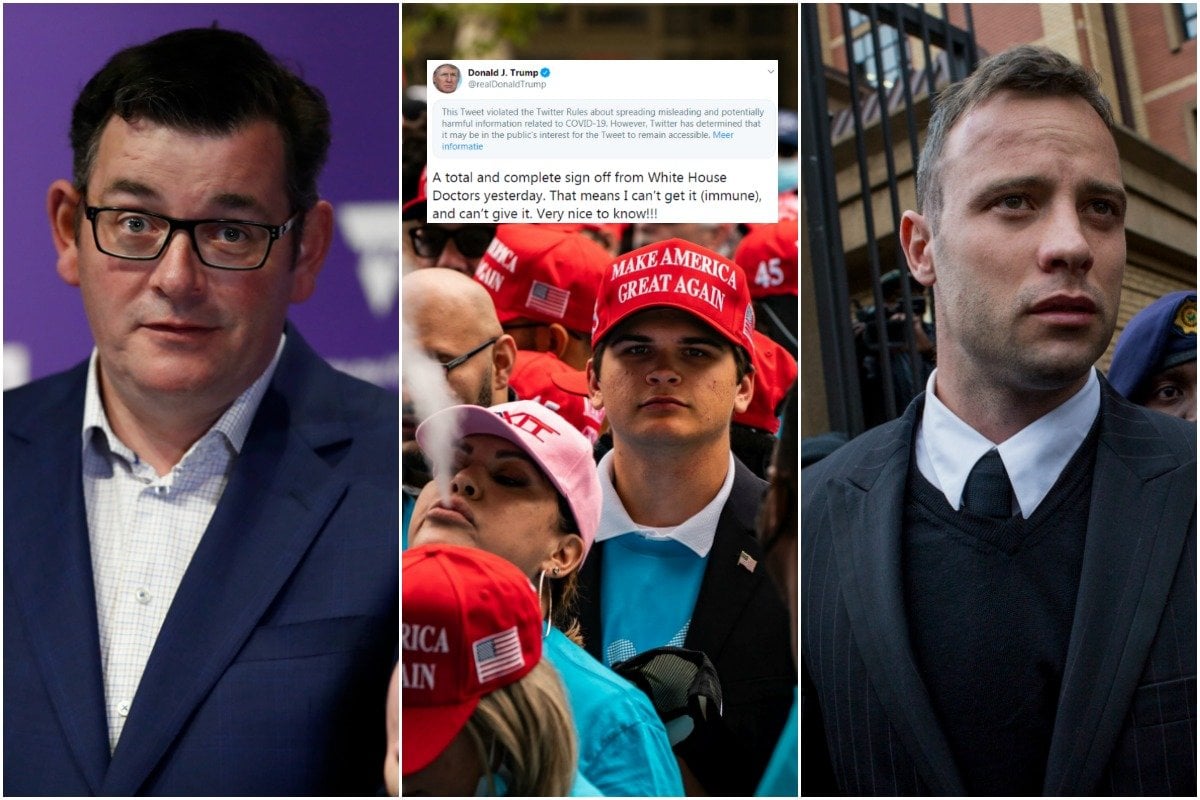 Home visits and the 5km radius: The Vic restrictions that could be eased from next week.

Under Victorian Premier Daniel Andrews' road map to recovery, the state required an average of five cases over two weeks to move into step three – but as of yesterday, the average was more than double at 9.6.

Over the weekend, Andrews extended his state of emergency and state of disaster by another four weeks noting that the figures showed this second wave was stubborn, and while he was prepared to ease some restrictions next Sunday, it would not be as significant as hoped.

Yesterday there were 12 new cases & the loss of one life reported. The 14 day rolling average is down slightly and cases with unknown source remain stable in Metro Melbourne. More data will be available later today. Info: https://t.co/eTputEZdhs#COVID19Vic #COVID19VicData pic.twitter.com/64CTaju3WX

But he acknowledged people were getting weary and frustrated by the restrictions.

"We all want this to be over ... but we can't pretend it is over just because we want it to be," he told reporters on Sunday.

The Herald Sun reports outdoor public gatherings of up to 10 people could be ­allowed and households might be able to host up to five visitors from another home. There's even a possibility the 5km travel cap could be revised.

But the publication reports there is unlikely to be any reprieve for shops, cafes and restaurants in Melbourne, but the premier has indicated businesses in regional Victoria were more likely to see relief.

"Does that mean we're doubling, tripling, quadrupling the number of people that can go to a pub? No. But if we can take some further small and safe steps we will," he said.

READ MORE: Exactly what we know about Melbourne's restrictions now the State of Emergency has been extended.

Year eight students and special school students will also resume on-site learning on Monday, while year 10 students enrolled in a VCE or VCAL program will be able to attend on-site for those classes. Students in years eight to 10 are due to return in a fortnight.

Premier Andrews has also confirmed over the weekend he will hand over his phone records from the day the state's hotel quarantine scheme was announced, after a request from an inquiry into the failed program.

WHO changes its advice on lockdowns: "stop using lockdowns as your primary control method."

The World Health Organisation has backflipped on its original COVID-19 stance, calling for world leaders to "stop using lockdowns as your primary control method."

Dr. David Nabarro has claimed the only thing the lockdowns achieved was poverty.

"We in the World Health Organisation do not advocate lockdowns as the primary means of control of this virus," Dr Nabarro told The Spectator.

"The only time we believe a lockdown is justified is to buy you time to reorganise, regroup, rebalance your resources, protect your health workers who are exhausted, but by and large, we'd rather not do it."

Dr Nabarro is urging countries to "develop better systems for doing it."

A number of health experts from all over the world signed a petition this week called the Great Barrington Declaration, calling for an end to coronavirus lockdowns earlier this week because of the "irreparable damage" they were causing.

With 12,000 signatures, it reads: "As infectious disease epidemiologists and public health scientists, we have grave concerns about the damaging physical and mental health impacts of the prevailing COVID-19 policies, and recommend an approach we call Focused Protection. Current lockdown policies are producing devastating effects on short and long-term public health."

Victoria remains under one of the longest and strictest lockdowns in the world.

Donald Trump says he is free of COVID-19 and "immune."

US President Donald Trump says his doctors have found he no longer has COVID-19 and will not be a risk to others as he returns to holding big rallies during the election campaign.

Trump's physician said on Saturday the president had taken a test showing he was no longer infectious and there was no evidence of "actively replicating virus," but didn't directly say he had tested negative.

"I passed the highest test, the highest standards, and I'm in great shape," Trump said on Fox News Channel on Sunday.

The president spent three days in hospital after revealing he had tested positive on October 2, and says he is no longer on medications for the coronavirus.

"I beat this crazy, horrible China virus," he said, adding on Twitter: "A total and complete sign off from White House doctors yesterday, That means I can't get it (immune) and can't give it. Very nice to know."

Twitter has flagged Trump's tweet for misinformation after he claimed to be immune to coronavirus. As we previously reported, scientists have confirmed at least 22 cases of reinfection pic.twitter.com/4975lo8cEk

Twitter has flagged the tweet for violating its rules on spreading misinformation, with the scientific evidence on immunity unclear.

Trump addressed supporters from a White House balcony on Saturday afternoon. He stood alone at the event, not wearing a mask as he spoke. In the crowd, most were wearing masks but not following social distancing guidelines.

Despite it being illegal for federal employees to engage in campaigning while on the job, Trump did so during the official address, violating the Hatch Act.

Nationally, the US is reporting on average 48,000 new cases a day, with hospitalisations in the Midwest hitting a record for the sixth day in a row on Saturday. 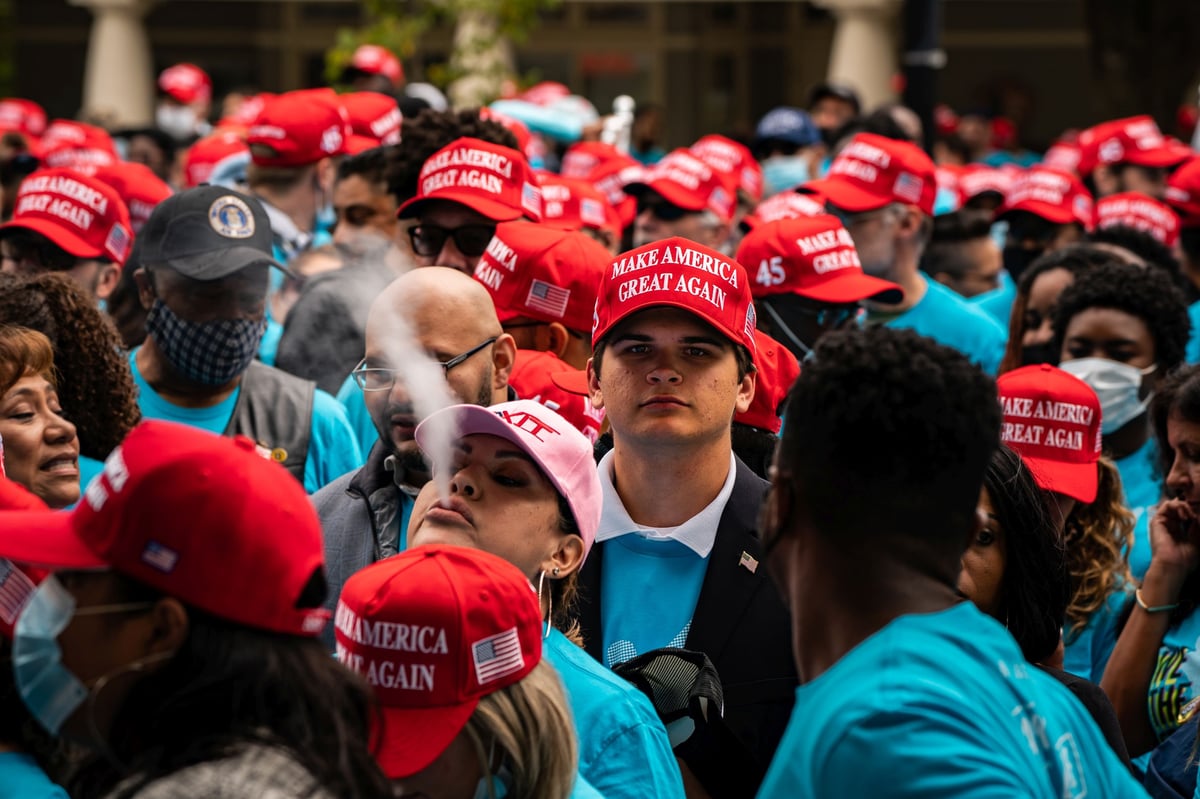 On Saturday outside the White House, Trump supporters didn't wear masks or practice social distancing as they gathered to hear the president talk. Image: Darrian Traynor/Getty.

CSIRO finds out virus can survive up to 28 days on surfaces.

Australian scientists have found that the virus that causes COVID-19 can survive for up to 28 days on surfaces such as the glass on mobile phones, stainless steel, vinyl and paper banknotes.

The national science agency, the CSIRO, said the research undertaken at the Australian Centre for Disease Preparedness (ACDP) in Geelong also found that SARS-CoV-2 survived longer at lower temperatures.

COVID-19 can linger on surfaces for up to 28 days. #9Today pic.twitter.com/DXeUq07KtQ

It said in a statement the virus survived longer on paper banknotes than on plastic banknotes and lasted longer on smooth surfaces rather than porous surfaces such as cotton.

The research, published in the Virology Journal, also found the virus lasted 10 days longer than influenza on some surfaces.

Dr Larry Marshall, Chief Executive of CSIRO, said establishing how long the virus survived on surfaces enabled scientists to more accurately predict and prevent its spread, and so protect the community from infection.

Scott Morrison has taken the opportunity to have a dig at the Queensland Labor government's border policy on a number of occasions over the weekend while on the campaign trail with his state LNP colleagues.

"The issue is that they should only be there as long as they have to be," he said on Sunday. "You have got to balance the economics with the health and when they can be safely opened, and I hope that's very soon."

Queensland again reported no new cases, but health authorities are urging Townsville residents to get tested after traces of the virus were detected in local sewage.

Victoria reported another death on Sunday, and 12 new cases, bringing the rolling average in metropolitan Melbourne to 9.3 cases per day, while the figure for regional areas was 0.4.

NSW recorded five new infections of COVID-19 as a cluster at a private clinic grew and patients at a radiology practice were warned to monitor their health for symptoms.

Morrison also said over the weekend, he had been speaking to a number leaders in the Pacific and Asia, including Japan and South Korea, about potential travel arrangements in the future.

But at this stage New Zealanders are on course to be the first to come to NSW, the ACT and Northern Territory, but not Queensland because of the two-week quarantine requirement that is still in place for travellers.

Paralympian Oscar Pistorius was jailed for 15 years for shooting and killing girlfriend Reeva Steenkamp, 29, in their bathroom on Valentine’s Day 2013.

Pistorius claimed he woke in their bed and opened fire believing she was a burglar.

A close friend and ex-teacher of Pistorius, Bill Schroder, has told The Sun, "What he really, really wants is forgiveness."

"I said to him that if he had killed my daughter I doubt I would forgive him. He is more concerned about forgiveness than actually getting out on parole. In fact, he has a real fear about getting parole as he knows they’ll be a backlash."

Schroder says the 'blade runner' has given up exercise, started smoking, turned to God and grown a beard behind bars.

-  Former Australian school teacher Gary Mulroy has been allowed to walk free from prison in Cambodia, and says he was targeted by an extortion racket. He served two years for assaulting six boys.

- Britain is at a "tipping point" in the coronavirus pandemic and the country must act now to stop history repeating itself, England's deputy chief medical officer has warned.

Reply
Upvote
1 upvotes
This story about Garry Mulroy clearly demonstrates the risks of volunteering in overseas countries where corruption is rife. This man set out to genuinely assist children and families in need, and in the process uncovered NGOs who were corrupt and mismanaging financial donations intended for these people. The false allegations made against him, the attempts at extortion, along with his experiences will no doubt affect him for the rest of his life, and his character will be unfairly tarnished.
G
guest2 2 years ago

Reply
Upvote
@guest2 WHO are calling for more nuance in controlling the pandemic, if you're dealing with spot fires, then don't flood the whole region in an attempt to douse them. Lockdowns were, without a doubt, necessary and effective in countries caught unawares and contagions raged widely and out of control. Now, like in Australia, where we're dealing with limited outbreaks, aggressive testing and contract tracing is more appropriate than Stage 4 lockdown.
G
guest2 2 years ago

Reply
Upvote
@gu3st Exactly what have the WHO done in the case of coronavirus to justify its expensive existence?
G
gu3st 2 years ago

Reply
Upvote
1 upvotes
@guest2 These damn globalists, huh?
The WHO does valuable work around the world, dropped the ball a bit on COVID, but perhaps the main reason it's in the sights of the right is because it very justifiably criticised Trump's mishandling of the pandemic. Trump has tried to scapegoat everyone and everything other than himself for the world's highest death toll in the wealthiest country in the world. Stopping the WHO's US funding, essentially due to a very large and brittle ego, isn't something to cheer.
L
laura__palmer 2 years ago